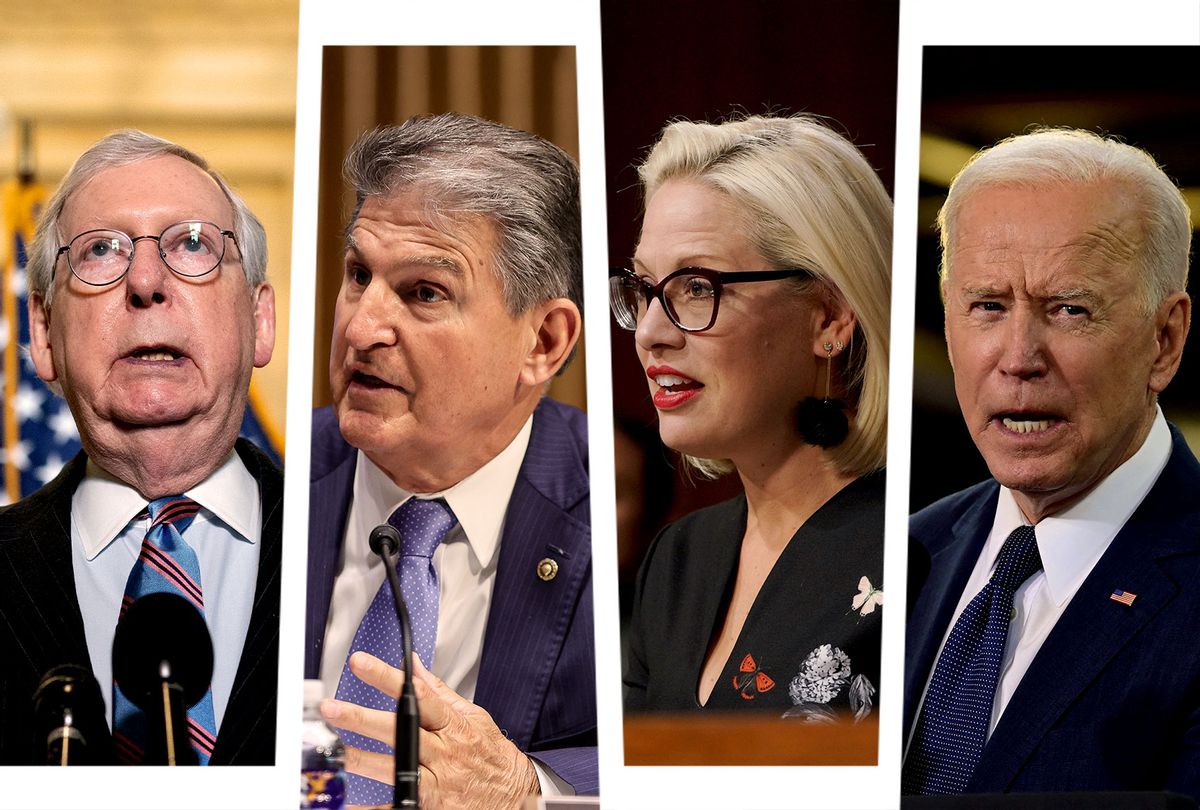 Senate Minority Leader Mitch McConnell seems to be almost intentionally making a mockery of the small number of Democratic senators who continue to defend the filibuster.

Democratic Sens. Joe Manchin of West Virginia and Kyrsten Sinema of Arizona have vocally opposed any effort to change the chamber's rules that require 60 votes to proceed on most legislation. Many Democratic lawmakers and advocates have called for the filibuster to be abolished, which would make it easier for the party to enact various pillars of its agenda.

The filibuster issue has once again come into focus because the debt ceiling. The American government is approaching the statutory limit on the amount of money it can borrow to fund the spending that Congress has already mandated, and if the limit is reached sometime later in the month, the country may go into default. The actual consequences of default are unknown because it has never happened before, but many analysts believe it would be economically calamitous and a devastating blow to the United States' financial standing.

Few people seriously think default is a good idea. But McConnell has taken the firm position that every Republican in the Senate will refuse to vote to raise the debt ceiling, and will in fact use the filibuster to prevent Democrats from doing so. His intention appears to be to force Democrats to use the budget reconciliation process in order to waste time and make their lives more difficult — even though the Democrats consistently voted with the GOP to raise the debt ceiling when Donald Trump was president. Democrats have refused to play along with McConnell's threats, setting up an extraordinarily high-stakes game of legislative chicken.

The Democrats do have another option to raise the debt limit. They could unilaterally change the filibuster rules to allow for the debt ceiling to be easily raised with just 51 votes. Manchin has already ruled this out, however, and Sinema likely agrees, since she's shown no sign of wavering from her previous stance.

The problem for them is that McConnell's hostage-taking exposes the central argument both Sinema and Manchin have made for keeping the filibuster as a fraud.

In separate op-eds, they have claimed that the 60-vote filibuster threshold encourages bipartisanship. Sinema wrote:

I understand bipartisanship seems outdated to many pundits. But the difficult work of collaboration is what we expect in Arizona. And I still believe it is the best way to identify realistic solutions — instead of escalating all-or-nothing political battles that result in no action, or in whipsawing federal policy reversals.

Since I was elected to Congress, a bipartisan approach has produced laws curbing suicide among our troops and veterans, boosting American manufacturing, delivering for Native American communities, combating hate crimes, and protecting public lands.

It's no secret that I oppose eliminating the Senate's 60-vote threshold. I held the same view during three terms in the U.S. House, and said the same after I was elected to the Senate in 2018. If anyone expected me to reverse my position because my party now controls the Senate, they should know that my approach to legislating in Congress is the same whether in the minority or majority.

Once in a majority, it is tempting to believe you will stay in the majority. But a Democratic Senate minority used the 60-vote threshold just last year to filibuster a police reform proposal and a covid-relief bill that many Democrats viewed as inadequate. Those filibusters were mounted not as attempts to block progress, but to force continued negotiations toward better solutions.

The filibuster is a critical tool to protecting that input and our democratic form of government. That is why I have said it before and will say it again to remove any shred of doubt: There is no circumstance in which I will vote to eliminate or weaken the filibuster. The time has come to end these political games, and to usher a new era of bipartisanship where we find common ground on the major policy debates facing our nation.

Many have already criticized these arguments, pointing out that the filibuster incentivizes inaction rather than compromise and that eliminating the 60-vote threshold might actually increase the amount of bipartisan legislation.

But the GOP's current use of the filibuster is the height of absurdity. It has nothing to do with bipartisanship. Even McConnell explicitly agrees that the debt ceiling must be raised. He is simply using the filibuster and the threat of economic disaster to force the Democrats to run through procedural hoops that will make it harder to achieve their policy agenda. It is exactly the kind of "political game" that Manchin said he wanted to end by keeping the filibuster.

It would be hard to invent a more clownish and ridiculous use of the filibuster if you tried. And it's entirely enabled by Sinema and Manchin's stubborn insistence that the filibuster is good for democracy.

On Tuesday night, President Biden told reporters that changing the filibuster to raise the debt ceiling is on the table, in his mind.

But even if most Senate Democrats agree, they need complete unanimity as a party for the plan to work. McConnell, for his part, doesn't seem to think Sinema or Manchin will be budging. As NBC News' Sahil Kapur reported on Tuesday, when McConnell was asked about the possibility of a change to the filibuster, he literally smiled.