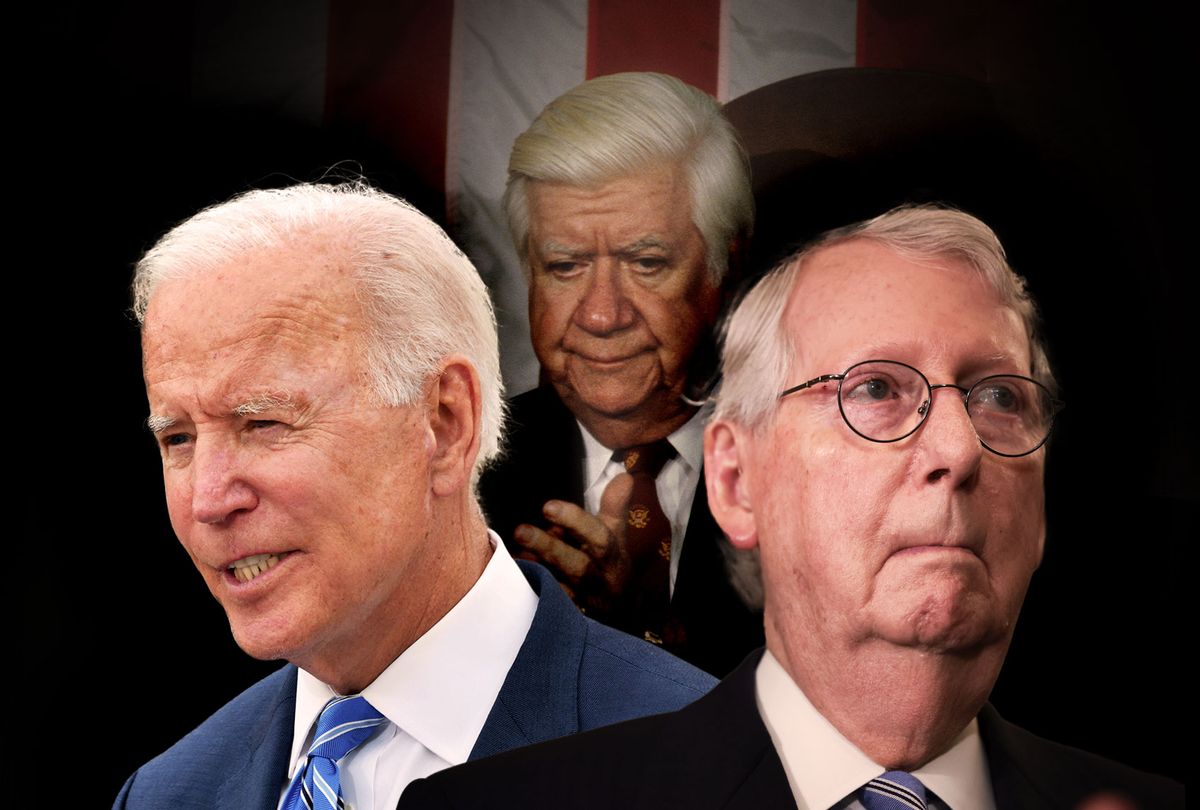 Tip O'Neill is gone — and so is the party system he once described by saying, "All politics is local." In Congress, the Republicans have replaced it with a party loyalty system which at times resembles a Leninist "party line." This reality underlies President Biden's response to the conflict among Democrats over whether to fund both "hard" infrastructure, which has bipartisan congressional support, and investments in climate and social infrastructure which, while popular with voters of both parties, are uniformly opposed by congressional Republicans.

The New York Times, like some moderate Democratic senators and representatives, appears reluctant to recognize this fundamental reality. As a result, it badly misrepresents the president's stance, claiming that Biden "throws in with the left" and heavily quoting disgruntled moderates who feel the president should have embraced the bipartisan legislation and effectively risked the climate and human investments in the Build Back Better package. That might have been a possible conclusion in O'Neill's era. No longer.

What Biden actually said to both factions was they have have to forge unity within the Democratic caucus. That's the only way to implement any Democratic platform, because the Republicans won't provide enough votes to enact any agenda that might unite our party." The starkest evidence of this reality that the locally-based bipartisanship of which Tip O'Neill was the master is dead can be seen in the debt ceiling battle. No one seriously believes that the voters of Maine demanded that Sen. Susan Collins should risk a global economic crisis and the destruction of America's "full faith and credit" in the pursuit of Mitch McConnell's desire to blame Democrats for any increase in the national debt. Everyone understands that Collins voted against raising the debt ceiling as part of her newly forged obligation to her party and Fox News — Maine voters and their local concerns be damned.

The Democrats, as an already diverse party becoming more diverse, are at a disadvantage in such a parliamentary, party-line system. It's understandable that moderate Democrats like Joe Manchin and Kyrsten Sinema would prefer to bring back O'Neill's local-loyalty politics. Its crushing defeat by GOP conservatives has extinguished moderate Republicans — and now it is marginalizing moderate Democrats.

But what Biden understands — and moderates need to accept (along with the Times) — is that Democrats, including the president, cannot pull a Lazarus to revive the entrepreneurial, multi-factional Congress of the late 20th century.

Biden was careful not to side with either faction of his party: He simply stuck to the premise that the Democrats need to pass an actual Democratic agenda. He pointed out that neither a "hard infrastructure only" bill nor a more expansive $3.5 trillion climate and social agenda can unite enough Democrats to pass without Republican votes. If there are no Republican votes available to raise the debt ceiling — and apparently there are not — there are certainly none for any version of a Democratic agenda.

Biden's solution is, so far, the only fix on offer — but it's not getting traction with the media. Journalists display a broad reluctance to accept that congressional Republicans and Fox News journalism are determined to kill whatever vestiges of bipartisanship remain. Since Democrats cannot reverse the parliamentary takeover of national politics, they must master winning within it. So far Joe Biden has been consistent in telling both sides, in essence: You can't have what you want politically. Partisanship is a reality and an electoral map tilted against us is a given. We still have to give the public what it needs and wants.

Taken out of the specific parliamentary rules governing the reconciliation package, Biden's approach, and his offer to both factions, runs something like this:

To maintain a Democratic majority, our party's platform must have enough appeal to independents and Republicans that we can win not only narrow but significant popular vote majorities in congressional and presidential races.  Progressive Democrats must find ways to achieve their goals that appeal to moderate and conservative voters. Democrats running in more conservative districts must learn to sell those programs directly to their voters, rather than validating their stands by citing bipartisan support in Congress — because that makes them hostage to the Republican leadership. The Democratic Party nationally must learn to present its programs in a way that alienates neither progressives (no more Sister Souljah moments) nor moderates (avoid "Defund the police" shorthand).

But if moderate Republicans and Democrats are challenged by the rise of a parliamentary, party-divided Congress, so are climate advocates. The key point that must be recognized is that there are Democrats in both the House and Senate who represent constituents who are heavily reliant upon, and supportive of, continued fossil fuel production and consumption. In a closely divided Congress, that makes a unilateral end to fossil fuel use through congressional mandate is beyond immediate reach, even if a majority of Americans come to favor it.

Even so, tens of millions of Americans who aren't yet ready to give up fossil fuels are eager to embrace clean energy. Over the years, that number has remained about 10% of the respondents to an average poll, enough of a swing vote to elect a decisive, pro-clean energy majority. Clean energy — wind, solar, electric vehicles, zero-emission homes and offices — is now cheaper than coal, oil and gas. As long as the government clears the way and provides the low-cost finance for massive increases in renewables and electrification, the country can still move off of fossil fuels, at an accelerating pace, in time to meet our Paris obligations.

So the climate movement's top priority should be to ensure that the provisions in the Build Back Better bill to support and encourage clean energy are strengthened and broadened, since the provisions designed to phase out fossil fuels are likely to be weakened.

Second, since phasing out policies that favor fossil fuels remains vital but incomplete work, Congress needs to soften the resistance in fossil fuel-producing regions. The bill should invest heavily in helping those regions diversify their economy. We need to put social insurance and government revenue security mechanisms in place before oil and gas join coal in the inevitable market collapse.

Third, remember that thus far, every significant U.S. step towards decarbonization — the coal plant shutdowns, the transition to cleaner cars and the agreement to phase out HFC refrigerants — was not driven from Washington, but from civil society, cities, states and businesses, and only then ratified by the federal government.

The debilitating impact of a narrowly divided, party-line Congress is absent from most local and state governments. This  enables them — red and blue alike — to make rapid progress and create market facts on the ground that even a badly broken federal government cannot resist. Politics in Washington may no longer be local, but politics in most of the country is still responsive to local values and local economic needs. This opens up healthy and vital opportunities for wind, solar and electrification to replace more and more of our outmoded dependence on coal, oil and gas. These steps toward decarbonization, like the recent Illinois move to clean electricity, in turn change national politics — even when politics is polarized along party lines.

It will be this combination — robust clean energy incentives, a just transition for fossil dependent regions and vigorous local climate leadership — that must carry  the U.S. toward its Paris commitments and accelerate progress toward a zero-carbon economy. And this can still happen even if the final version of the Build Back Better bill won't get us there by itself.