Republicans thought the Supreme Court could stealthily ban abortion. They were wrong 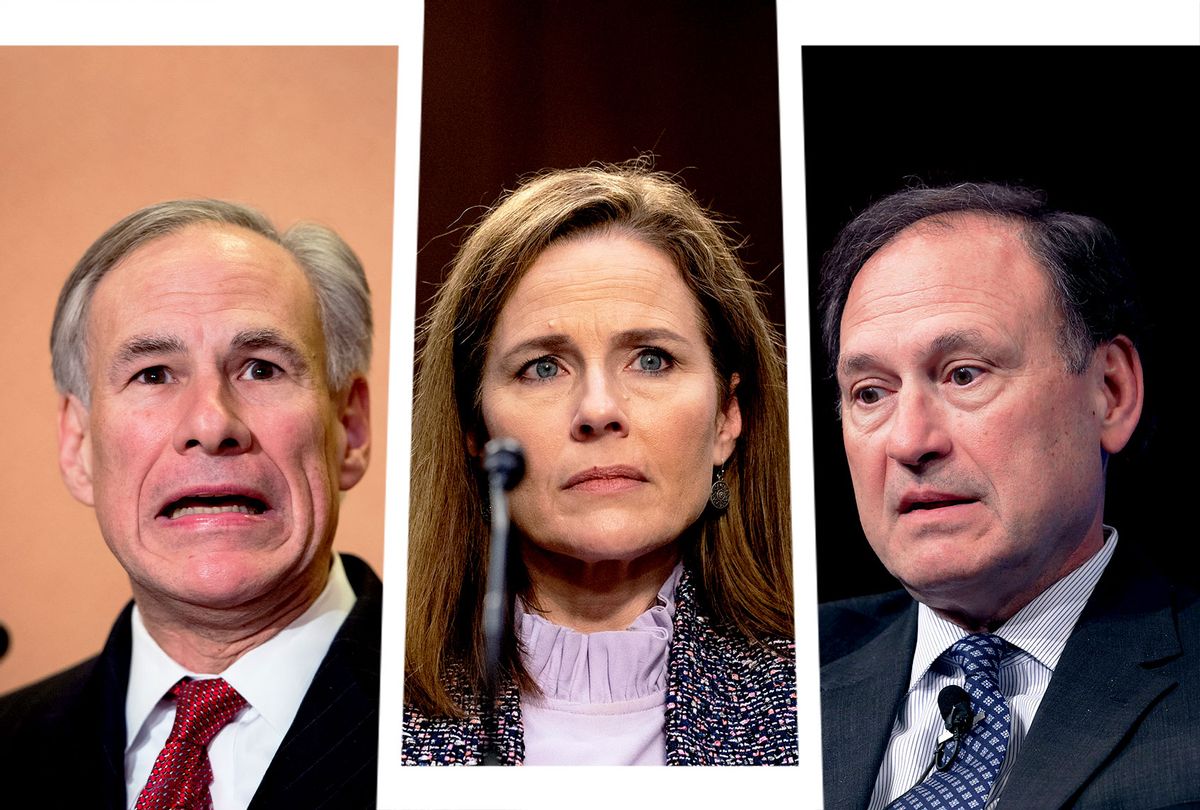 Late Wednesday night, there was finally the first snippet of good news this year in the never-ending abortion wars. U.S. District Judge Robert Pitman temporarily blocked Texas' near-total ban on abortions. The injunction was in response to a lawsuit filed by the Department of Justice against Texas. Attorney General Merrick Garland called the ban on all abortions two weeks after a missed period — which are 9 out of 10 cases — "clearly unconstitutional."

Signed into law by Republican Gov. Greg Abbott in May, Texas' abortion ban sets up a bounty hunter system that allows any random stranger to claim sovereignty over a woman's body and sue anyone who helped her abort a pregnancy. In his 113-page decision —  a searing and angry breath of fresh air for those Americans who believe women are people — Judge Pitman called the law an "unprecedented and aggressive scheme to deprive its citizens of a significant and well-established constitutional right."

This decision wasn't just a rebuke to the misogynist Texas legislators who passed this law, but to the Supreme Court that upheld it.

Without hearing arguments, the highest court in the nation allowed Texas' ban to go into effect through an unsigned "shadow docket" decision short enough to be written on a postcard. So Pitman put in the work that the conservative majority on the Supreme Court wouldn't do. He listened to arguments, he examined the evidence, and he wrote a decision painstakingly explaining his reasoning. It turns out that banning abortion through the back door is not as easy as Republicans and the partisan hacks they installed on the Supreme Court thought it would be.

And yes, conservatives clearly thought they could quietly overturn Roe v. Wade without the public noticing.

The entire Texas abortion ban was built on a cloak-and-daggers strategy. The law itself was an effort to get around the problem of the news coverage that flows from clinics and reproductive rights suing the state for passing abortion bans. The "shadow docket" move was more of the same, allowing the Supreme Court to overturn Roe without coming right out and saying that's what they did. As soon as the non-decision decision came down, the conservative propagandists fanned out, insisting that the Supreme Court ruling wasn't really a Roe overturn but merely a "procedural ruling" that causes "no harm."

But as Pitman's decision demonstrates, that's a flat-out lie.

His ruling cites numerous examples of harm that the Supreme Court ignored in issuing its paragraph-length decision, including to "a Texas minor who had been raped by a family member" and had to drive eight hours for care, and "another woman from Texas who had been raped" and struggled "to take extra time off from work to make the trip to Oklahoma, as well as find childcare for her children."

In one sense, this nonsense about how this is merely a "procedural" decision — as if people weren't going to notice that 90% of abortions were banned in Texas — worked. Every time I tune into a cable news show discussion about abortion and the courts, the discussion is over "if" the Supreme Court will overturn Roe in the "future," with little acknowledgment that they already did it through the back door. While the Supreme Court is hearing a more formal case in December — Dobbs v. Jackson Women's Health — that will allow them to legalize abortion bans nationwide, the damage has already been done. And let's face it, even when they do issue a more extensive ruling, they're going to be deceptive about it and try to find some legal reasoning that allows abortion to be banned without coming right out and saying they're overturning Roe.

The reason conservatives want so much camouflage for their Roe overturn is not mysterious. Abortion rights are very popular, and there's a real chance this could hurt Republicans electorally. Sexism and still-lingering American puritanism may cause all sorts of chaos in polling people's moral judgments on abortion, but when people are asked point-blank about the right to get one, around three-quarters want it to stay put. Even 40% of people who call themselves "pro-life" want the right to abortion, because even they know, on some level, that being against abortion is easy until you need one.

So really, it should be no surprise that approval of the Supreme Court has plummeted to a new low of 40%, down from 58% a mere year ago. Even more detailed polling shows that skepticism of the court has dramatically increased, with more Americans agreeing that Congress should do something to rein the court in — or abolish it altogether. Somehow, however, conservatives seem to be shocked that their efforts to ban abortion under the cover of darkness have not gone unnoticed.

The conservative justices behind the shadow docket abortion ban, for instance, have become incredibly whiny in the face of all the completely earned accusations that they are sleazy fundamentalists who are too cowardly to own their rejection of law and custom in their frenzied efforts to turn the U.S. into Gilead. In the past month alone, Amy Coney Barrett gave a protest-too-much speech denying she and other conservative justices are "partisan hacks," Samuel Alito blamed the media and not his own actions for people disliking him, and Clarence Thomas accused people of wanting to destroy "our institutions because they don't give us what we want, when we want it," seemingly talking to a bunch of toddlers wanting candy, rather than citizens demanding basic human rights.

Even the Texas anti-choice activists behind this ban seem to be caught flat-footed. As Jill Filipovic writes in the Atlantic, "abortion opponents are claiming to be surprised that the law is being used as written—and are perhaps realizing, belatedly, that their vigilante strategy comes with more than a few perils."

It appears that the people behind this law thought the mere threat of a lawsuit would cause abortion providers to shut down and that actual enforcement — which would end up pitting the kind of repugnant people who would be abortion bounty hunters against sympathetic figures like doctors  — wouldn't be necessary. At first, that seemed likely, as clinics across the state shut down services and sent patients out of state for help. But then a San Antonio-based physician, Dr. Alan Braid, performed an abortion and wrote a Washington Post op-ed about it, daring anti-choicers to sue him. And sure enough, the situation turned into a circus, with two disbarred attorneys from out of state — neither of whom actually oppose abortion rights — suing Dr. Braid.

John Seago, an anti-choice activist who helped pass this law, clearly recognizes the optics are bad here, whining to the New York Times that the lawsuits aren't "valid attempts to save innocent human lives" and instead are "self-serving legal stunts."

But here's the thing: There is no other way this law could be enforced but through repulsive people filing lawsuits. Despite all the self-flattery about being "pro-life," anti-choice activists are clearly motivated by misogyny, and don't care about "life." That's been demonstrated in a million ways, most recently in the embrace of anti-vaccine/pro-COVID-19 policies by Republicans. So anyone who would sue, declaring sovereignty over a woman's body and announcing his right to force childbirth on her, is going to be an unpleasant character. Seago knows this, I'm sure. He certainly sees the people who protest abortion clinics and how they don't generally do the best job of concealing how much hate and sexual resentment fuels their politics.

In a certain light, it makes a rough sense that conservatives thought they could get away with banning abortion through subterfuge. Americans have a long history of discomfort with the topic, and with talking about sex generally. Pro-choice activists are mostly women, making it easy for the right, in the past, to convince most Americans that threats to abortion rights are being overblown by hysterical feminists. And while abortion is common in one sense — 18% of pregnancies end in abortion, about 1 in 4 women will have one at some point — it's not something most people deal with on a daily basis. It's why the anti-choice movement has been so successful at gradually making abortion much harder to get without most people noticing. It's just not something most people think about until they or a loved one needs access.

But what conservatives are swiftly learning is Americans aren't the prudes and sexist they thought we were. Attitudes about sex are rapidly liberalizing. For instance, 73% of Americans are fine with sex outside of marriage now, up from 53% twenty years ago. (And those who disapprove are hypocrites, as 95% of Americans reported having had premarital sex in 2006, a number that's surely gone up since then.) And a majority of Americans agree that women have a long way to go to achieve equality, which is a good stand-in measure for whether or not people think sexism is wrong.

In light of these changes, it's not a surprise that people are both outraged about the Texas abortion ban and unafraid to say so publicly. The fight to end abortion rights is, politically at least, going to be much harder than Republicans were clearly betting it would be.