Marisel Salazar thinks if you can eat it, you can probably put adobo on it

A look inside one food writer’s Panamanian, Cuban and Japanese pantry 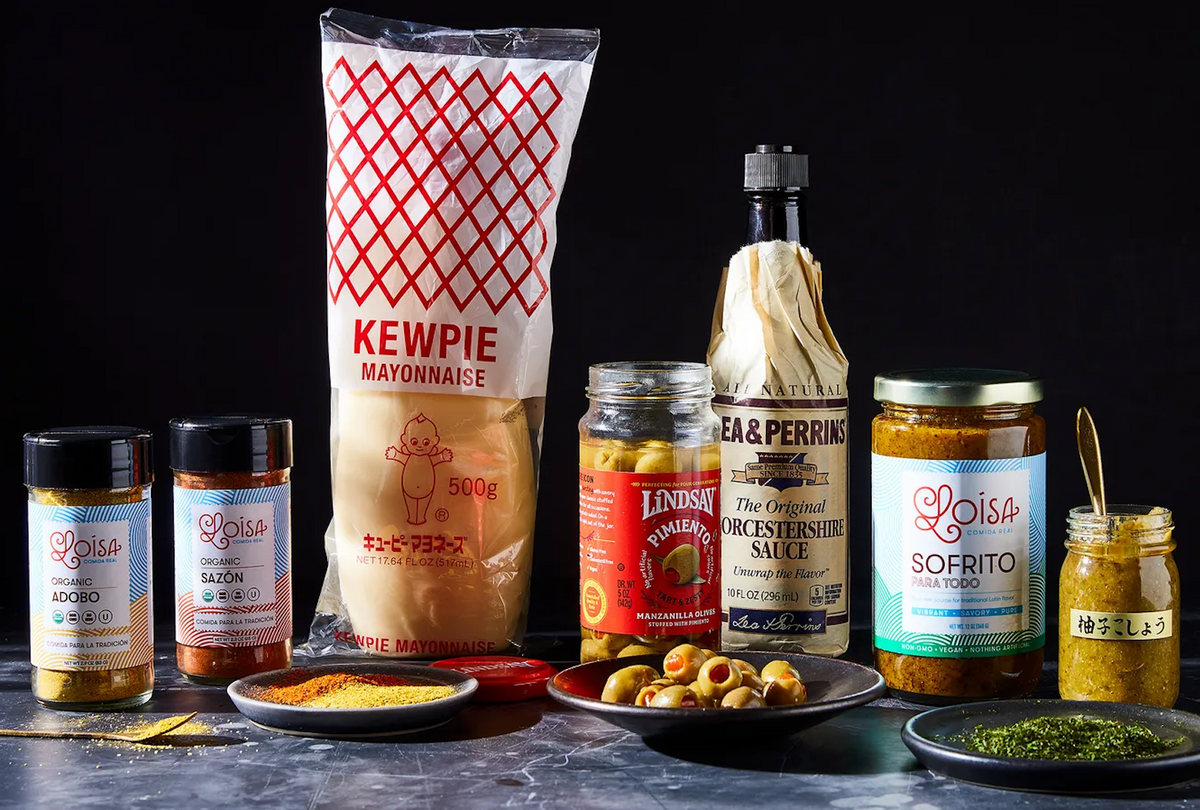 Welcome to Marisel Salazar​​'s Pantry! In each installment of this series, a recipe developer will share with us the pantry items essential to their cooking. This month, we're exploring 8 staples stocking Marisel's Panamanian, Cuban, and Japanese kitchen.

When you think of Latin American cuisine, Panama may not jump to your mind; we're mostly known for the canal, as a financial hub, and for our breathtaking beaches. Our food is a mix of African, Spanish, and indigenous (like the Kuna Indians) techniques, dishes, and ingredients, with rice, beans, and corn as basic staples. Since the country is surrounded on both sides by oceans, we have incredible seafood, tropical fruits, and vegetables. In fact, our unique terroir has contributed to the worldwide popularity of the award-winning Geisha coffee.

Due to the construction of the canal in November 1903, more than 50,000 workers migrated to Panama from the West Indies, like Jamaica, Martinique, Barbados, and Trinidad. The new arrivals brought their cooking cultures with them, which embedded itself into the food as Afro-Panamanian cuisine. Think: salted cod stew, fried and marinated fish, corvina ceviche, fried plantains, and coconut rice.

Originally from Panama, I'm an immigrant turned American citizen. The majority of my extended family (apart from my mother, sister, and myself) lives between Panama City and Colón. We left when I was a toddler and lived in Honolulu and Okinawa, Japan, before coming to the contiguous U.S. Despite being a working single mother, who at one point was also going to college, my mom made sure we had comida casera, or home cooking. Despite our pleas for the whimsical boxed, processed foods we saw on the few American cable channels we received abroad, or that were offered at the commissary (that's the military grocery store, made available to us by Mom's husband at the time) when we had access, Mom always preferred to cook, so much so that I called her "Maria Stewart." Her name is indeed Maria, but she's also a fantastically clever cook.

Even as an immigrant abroad, my mother loved Martha Stewart and Jacques Pépin. I knew who Julia Child was before I cared to know about famous chefs — my mother was always referencing her in conversation as if they were girlfriends. "Oh, Julia did this, Julia did that." And then there was famed Cuban cook and food celebrity Nitza Villapol, actually known as the "Cuban Martha Stewart." Villapol's cookbooks like Cocina al Minuto are fundamental for home cooks, with basic, traditional Cuban recipes like picadillo, vaca frita, and arroz con Pollo — plus creative ways to make up for ingredient deficiencies from food rations. Growing up on a tight budget, we never bought lavish ingredients, and always made creative substitutions. We bought bone-in, skin-on chicken on sale because it was cheaper than boneless skinless (though I would argue tastier, too). We were sustainable, and practiced zero-waste or closed-loop cooking before those terms became trendy. We had to use every scrap of food — or freeze it for later — to make sure that the monthly mortgage and health insurance payments were made. I was incredibly aware of our financial situation from a very young age, but we never lacked flavor, in life or in the food my mother made.

Her enthusiasm for making gourmet-ish meals for her daughters always stuck with me, and molded my own cooking style. Not only did she parent me as her child, but also as a cook.

Growing up whisked all over the world, I developed a fearless palate, always curious to try something new. I ate sea cucumbers and natto in Japan, poi in Hawaii, and morcilla when I lived in Madrid as a young adult. My cooking style is a blend of all the countries I've lived in — how could it not be? It's Panamanian, Cuban, Spanish, Japanese, Hawaiian, and American, but there are eight essential ingredients that I always keep on hand from all of these cultures that find themselves in most of my recipes.

My 8 Panamanian, Cuban and Japanese essentials

You see hints of Spanish colonialism in Panamanian cuisine with the Manzanilla olive. These plump, meaty, brine-soaked, greenish-brown gems add instant umami to any dish. The pimiento-stuffed variety makes food pop with their red color when sliced and adds zest to drinks (hola, martinis!). Some say there's a slight almond undertone to Manzanilla olives.

I like to save the brine to sprinkle onto meats, use as a part of salad dressings, or flick onto anything that needs acid. Toss whole olives into salads, tomato soup, red-sauce-coated pasta, chicken or beef dishes, and plenty more. Lots of tomato references, right? Tomato is a Manzanilla olive's best friend.

Rising in worldwide popularity and culinary renown is yuzu paste (also known as yuzu kosho). Yuzu is an East Asian citrus fruit. This thick, acid-green-colored paste is a fermented Japanese condiment made from chile peppers, yuzu peel, and salt. Kosho refers to the chiles. The flavor is aromatic, bright, fresh, and citrus-forward, but also a bit bitter from the peel and hot from the chiles. It is used in dishes like Japanese hot pot (or nabemono), soups, sashimi, and one of my favorite comfort food dishes: Japanese tuna fish sandos, with Japanese mayo, aonori, yuzu paste, mirin, and rice vinegar, all on milk bread.

Sazón means "seasoning" in Spanish, and this seasoning specifically is a staple ingredient in Latin American cooking. Sazón is known for its distinctive savory taste and the red-brown color that it brings to food. It is a pungent spice blend of achiote or annatto, salt, cumin, coriander, garlic, oregano, and black pepper. It adds color and flavor to meats, fish, poultry, soups, and stews — without adding heat.

Rub it on steaks, pork, chicken, and fish as a marinade before grilling, frying, or baking. Sprinkle it in soups and stews or add to beans and rice. It's also the prime flavor in arroz con pollo. I love using sazón in less traditional ways as well: a sprinkle on my eggs (scrambled, fried, deviled — any style works), shaken onto French fries (think of it like Old Bay in this case), or a light dusting on top of a bagel schmeared with cream cheese.

Similarly to sazón, if you can eat it, you can probably put adobo on it. Another essential in the Latin American cupboard, adobo is a blend of five-plus spices, usually salt, garlic, turmeric, black pepper, and oregano (but the exact mix can vary). This is a savory, all-purpose product used for grilling, roasting, frying, or sautéing — great for adding instant savoriness. It's widely used as a base seasoning for meats, fish, stews, sauces, beans, stock, and vegetables. I use it almost like a security blanket — I will always throw in a dash to whatever savory dish I'm cooking, just in case.

Also known as anori, these dried and crumbled seaweed flakes are my pièce de résistance, used to bring umami flavor and a "from the sea" aroma to Japanese dishes like soups, soba, or udon noodles, as well as my favorite tuna fish sandos. It comes in either flakes or powder — I prefer flakes. I'll sprinkle it onto salads, eggs, rice, broiled salmon, and, my newest obsession, mayo to dip fries in. Which brings us to . . .

If ever there were a mayo that could inspire a cult obsession, Kewpie's the one. Maybe that's why the mayo mania stretches so far in Japan that there are even mayo-flavored ice creams and chips available at restaurants and stores. I love this thick and creamy, tangy and sharp, yellow-tinted mayo so much that I even have a fan-girl tote bag dedicated to it, stamped with a Kewpie baby doll: I am a total mayora (that's the Japanese word for someone addicted to mayo). The key differences between Japanese-style Kewpie mayo and the American counterpart are that Kewpie is made only with egg yolks, rather than whole egg, and no water, both of which contributes to Kewpie mayo's thicker texture. Most notably, the alluring nature of Kewpie comes from MSG. Search the label and you will see it uses vinegar, yet no added sugar or salt — the MSG brings all the seasoning it needs.

I use Kewpie mayo anywhere I would use American mayo (burgers, deviled eggs, French fries, and sandwiches, to name just a few). And if the flavor alone doesn't inspire you to replace your current mayo with the Kewpie brand, its unique packaging and product design will. Unlike jarred mayos, it comes in a borderline-flimsy red-and-clear squeeze bottle with the iconic Kewpie baby welcoming you with open arms, wrapped in decorated cellophane. (This baby isn't as random as you might think: A Kewpie is actually a type of doll, characterized by a large head, big eyes, chubby cheeks, and a curl or topknot on top of its head.)

Sofrito is la salsa madre, the mother sauce, of Hispanic cooking. Also known as recaito in some Latin American countries, sofrito is what I would say is the third member of the Holy Latin Trinity, along with adobo and sazón. This mixture of chopped aromatics gets cooked down until saucy, then used as the foundation for meat and seafood dishes, stews, soups, beans, and rice.

While it differs slightly from country to country, tomatoes are the heart of sofrito, along with garlic, onions, bell peppers of all colors, achiote, cilantro, oregano, and/or parsley. Sofritos can vary in color from red to orange to green. Puerto Rican sofrito, known as recaito, is typically green due to the heavy use of culantro, a green herb that tastes like a stronger cousin of cilantro. Cuban sofrito uses tomatoes, red bell peppers, and diced ham. It can be homemade or bought at the grocery store in tubs or individual frozen cubes. Sofrito is another one of the foods that evokes the history of Spanish colonialism in Latin America: introduced by colonizers and adapted to the availability of ingredients found in Latin America. Supposedly, sofrito comes from Catalonia and was used as far back as the 1300s, where hints of it were known as "sofregit."

We call this "English sauce" in my family because it is exceedingly difficult to say with a perfect American accent, let alone a Spanish accent. Lea & Perrins has always been my family's brand of choice. We came across it while living abroad for a time on military bases, and it was accessible in Panama due to the heavy American influence on the culture and cuisine. There is so much happening in a simple shake from the bottle: vinegars, fermented onions and garlic, molasses, tamarind paste, cured anchovies, chile pepper, and spices. It's powerfully umami, delightfully sour (thanks to tamarind and vinegar), and the faintest bit sweet from molasses. It's a go-to marinade (by itself or in addition to other ingredients) for chicken in my family and another one of those "dot the i's and cross the t's" ingredients that we add to every savory recipe — just in case.