Can we stop calling our humongous military spending the "defense" budget?

Paging George Orwell: Even antiwar progressives use the term, which suggests how far our discourse has degraded 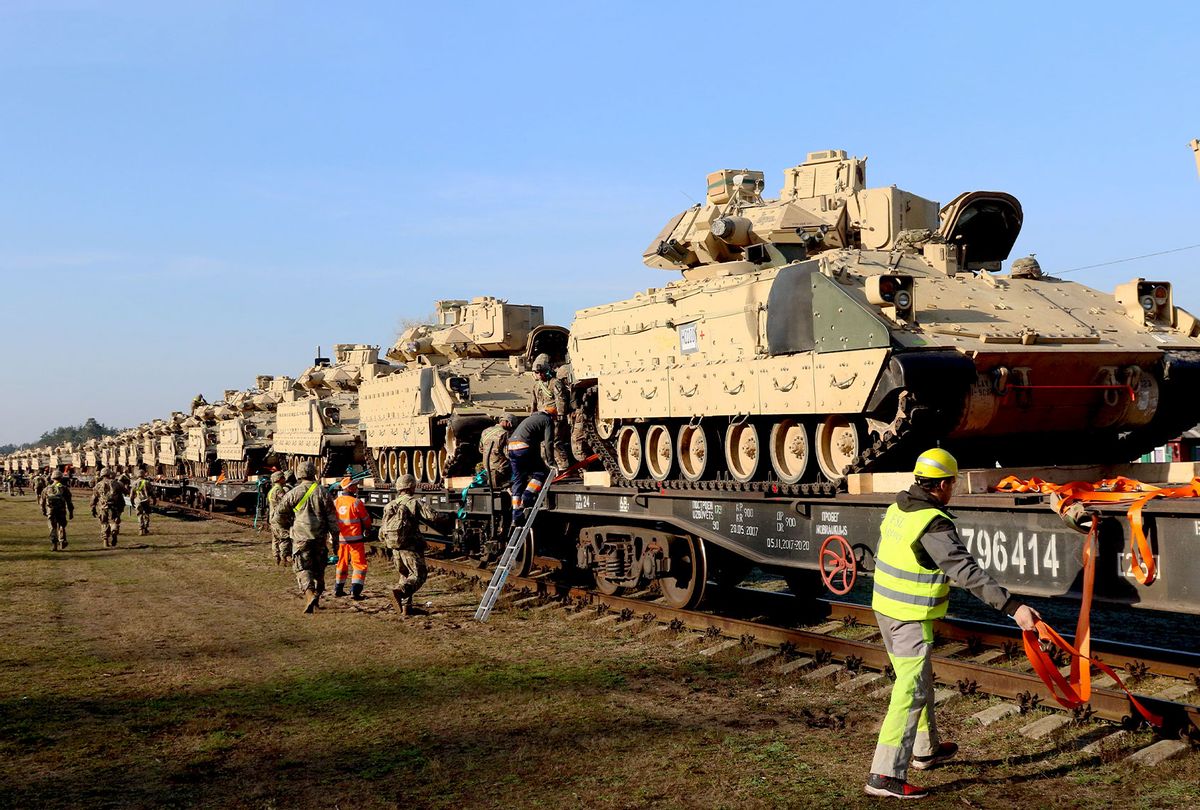 Members of the US Army 1st Division 9th Regiment 1st Battalion unload heavy combat equipment including Abrams tanks and Bradley fighting vehicles at the railway station near the Pabrade military base in Lithuania, on October 21, 2019. (PETRAS MALUKAS/AFP via Getty Images)
--

It's bad enough that mainstream news outlets routinely call the Pentagon budget a "defense" budget. But the fact that progressives in Congress and even many antiwar activists also do the same is an indication of how deeply the mindsets of the nation's warfare state are embedded in the political culture of the United States.

The misleading first name of the Defense Department doesn't justify using "defense" as an adjective for its budget. On the contrary, the ubiquitous use of phrases like "defense budget" and "defense spending" — virtually always written with a lower-case "d" — reinforces the false notion that equates the humongous U.S. military operations with defense.

In the real world, the United States spends more money on its military than the next 10 countries all together. And most of those countries are military allies.

What about military bases in foreign countries? The U.S. currently has 750, while Russia has about two dozen and China has one. The author of the landmark book "Base Nation," American University professor David Vine, just co-wrote a report that points out "the United States has at least three times as many overseas bases as all other countries combined." Those U.S. bases abroad "cost taxpayers an estimated $55 billion annually."

As this autumn began, Vine noted that President Biden is "perpetuating the United States' endless wars" in nations including "Iraq, Syria, Somalia and Yemen" while escalating "war-like tensions with China with a military buildup with Australia and the UK."

All this is being funded via a "defense" budget?

As Orwell wrote in a 1946 essay, political language "is designed to make lies sound truthful and murder respectable, and to give an appearance of solidity to pure wind." In 2021, the hot air blowing at gale force through U.S. mass media is so continuous that we're apt to scarcely give it a second thought. But the euphemisms would hardly mean anything to those in faraway countries for whom terrifying and lethal drone attacks and other components of U.S. air wars are about life and death rather than political language.

You might consider the Pentagon's Aug. 29 killing of 10 Afghan civilians, including seven children, with a drone attack to be a case of "respectable" murder, or negligent homicide, or mere "collateral damage." Likewise, you could look at numbers like 244,124 — a credible low-end estimate of the number of civilians directly killed during the "war on terror" in Afghanistan, Pakistan and Iraq — and consider them to be mere data points or representing individuals whose lives are as precious as yours.

But at any rate, from the vantage point of the United States, it's farfetched to claim that the billions of dollars expended for ongoing warfare in several countries are in a budget that can be legitimately called "defense."

Until 1947, the official name of the U.S. government's central military agency was the War Department. After a two-year interim brand (with the clunky name National Military Establishment), it was renamed the Department of Defense in 1949. As it happened, that was the same year that Orwell's dystopian novel "1984" appeared, telling of an always-at-war totalitarian regime with doublespeak slogans that included "War Is Peace."

Today, the Department of Defense remains an appropriately capitalized proper noun. But the department's official name doesn't make it true. To call its massive and escalating budget a "defense" budget is nothing less than internalized corruption of language that undermines our capacities to think clearly and talk straight. While such corroded language can't be blamed for the existence of sloppy thinking and degraded discourse, it regularly facilitates sloppy thinking and degraded discourse.

Let's blow away the linguistic fog. The Pentagon budget is not a "defense" budget.