Democrats don't have to save themselves. Donald Trump is still here to help

The "popularist" theory is nothing new. But Democrats should stop soul-searching while Trump is still a threat 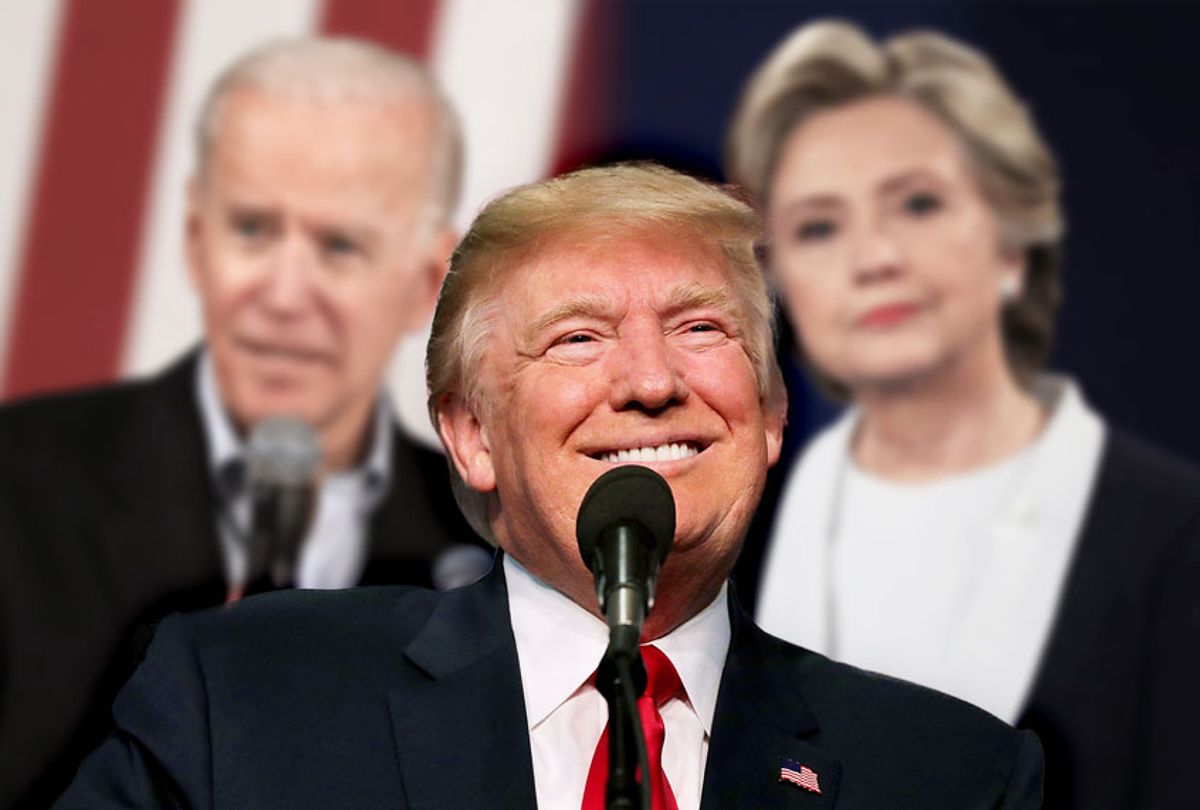 Democrats find themselves, in the midst of an intense battle to pass President Biden's domestic agenda while avoiding a debt limit showdown, once again asking the perennial post-election question: How can they win back white, non-college-educated voters?

This has been the Democrats' big conundrum for over 30 years now and most of the time they end up with exactly the same possible strategies. Either appeal to the white working class' economic self-interest, pander to their prejudices or triangulate against their own base. Sure there are other strategies for winning elections thrown out there, like find the apathetic voters who don't bother with politics and get them to the polls or wait for demographic changes that will bring more voters into their coalition. Often there is a "one from column A and one from column B" quality about this discussion, but there really hasn't been anything new added to the mix for several decades.

At this moment, the discussion is being waged around a couple of takes on these basic ideas. The New York Times' Ezra Klein interviewed data specialist David Shor for his column to talk about a theory they are calling "popularism" which they defined this way:

Democrats should do a lot of polling to figure out which of their views are popular and which are not popular, and then they should talk about the popular stuff and shut up about the unpopular stuff.

It may surprise you, as it did me, that this is considered some kind of breakthrough idea but apparently some people think it is.

Of course, Democratic politicians don't actually have that kind of control over the narrative. Politics are much more national than they used to be with the press out there contributing their takes and independent activists trying to advance their issues and causes. And needless to say, there are the Republicans who are very, very good at ruthlessly hijacking the political narrative. The idea that Democrats can just keep their less popular ideas on the down-low isn't remotely realistic.

The problem began with the Southern Strategy in 1968 and gained steam throughout the 80s as all the old Southern Democratic lions retired, switched parties or died, making the two parties polarized ideologically and demographically. In fact, 30 years ago this issue was considered a regional problem and the consultants and strategists all said that we needed presidential candidates from southern states so that they could relate to the "bubbas" as they called them. Essentially, the advice boiled down to finding (or creating) cultural affinity combined with an economic pitch to the working man, which always polls well.

Jimmy Carter was the first stab at this approach and it worked out in 1976. But when a movie star from California challenged him in 1980, all that affinity for authentic Southern identity went right out the window. Ronald Reagan appealed on a whole other level. His slogan was "Let's Make America Great Again" and those white, working-class Democrats ate it up with a spoon. Those voters became known as Reagan Democrats. They're all old or dead now but the Democratic Party is still trying to get them back.

Bill Clinton, a southern boy from Arkansas, was the first candidate after Carter to win the presidency, reactivating the argument that southern cultural affinity would signal to this elusive group of white voters that the Democrats weren't snobby elites from the Big City trying to impose their deviant ways on Real Americans. He didn't make a populist argument. He was a DLC Democrat, a group that had decided that old-fashioned new deal style government needed to go the way of the Dodo, so they adopted a technocratic "market" approach, thinking that would be a better way to deliver government to the masses. The populism was left to a billionaire named Ross Perot, who took one of the largest 3rd party shares in US history in 1992.

And at the same time, you had a Republican Party that was radicalizing rapidly under the leadership of a crude demagogue by the name of Newt Gingrich who was heating up the culture war and feeding red meat to these contested voters. Clinton was caught in that crossfire and never won a majority. He survived because the radicalized Republican Party had succumbed to hubris and tried to remove a popular president on trumped-up charges. Clinton was very lucky in his enemies. There's an important lesson for the present day in that.

Shor obviously thinks that President Obama was able to win two terms by following what he prescribes, arguing that Obama downplayed the unpopular culture war issues that bother these voters and emphasized the issues that drew them in. Sure, that's true, but Obama embodied racial progress and generational change which meant he didn't have to say much about it in order to keep his base happy, at least in the beginning. Unfortunately, the backlash on the right was fierce and it dogs the party to this day. The first Black president may have won two campaigns but his election drove the Republican Party over a cliff.

These last few decades have been backlash followed by a backlash against the backlash, and we are still in the middle of that dynamic. Democrats have tried everything to offset the structural disadvantage they have as the party of multi-urban voters in a system that over-represents rural citizens. Better messaging isn't going to solve that problem.

But that doesn't mean the Democrats are doomed, at least not yet.

If polarization and backlash are what drives the political dynamic, then the Republicans have given Democrats a gift that keeps on giving. His name is Donald Trump.

While Democrats dither over which "Kitchen Table Issue" will appeal to some rural voter in Iowa, the Republicans are becoming frantic that Trump is going to ruin 2022 and 2024 for them. Politico reports that the party wants to talk about inflation and Afghanistan and crime etc, while Trump is out there ginning up the MAGA faithful with non-stop talk about the Big Lie. Republicans are reportedly very nervous that "in focusing on that issue above all others, Trump effectively makes the 2022 election a referendum on him instead of Biden."

Republican Senators are also deeply concerned that Trump is going to mess up their chances of retaking the upper chamber, according to The Hill:

"I think we're better off when he's not part of any story," said a Republican senator, who said his view is widely shared in the GOP conference.

That's a shame for them because he's not going anywhere. In fact, this past weekend the Senate's elder statesman Chuck Grassley, R-IA, decided if you can't beat them, join them and attended Trump's rally to receive his blessing from the Dear Leader himself.

Trump's meddling in the primaries is causing huge headaches as well.

The AP reported that there is no vetting of the candidates he's choosing and a good number of them are very dicey characters accused of violent behavior and criminal financial activity. Their only qualification is their total loyalty to Donald Trump. They will no doubt be popular with the Trump base but they will have difficulty winning general elections.

Republicans have a very big, orange albatross around their necks right now and even though they know it could cripple their chances to regain the majority, they can't get it off. We'll have to see if the Democrats and their consultants can stop navel-gazing long enough to recognize it.