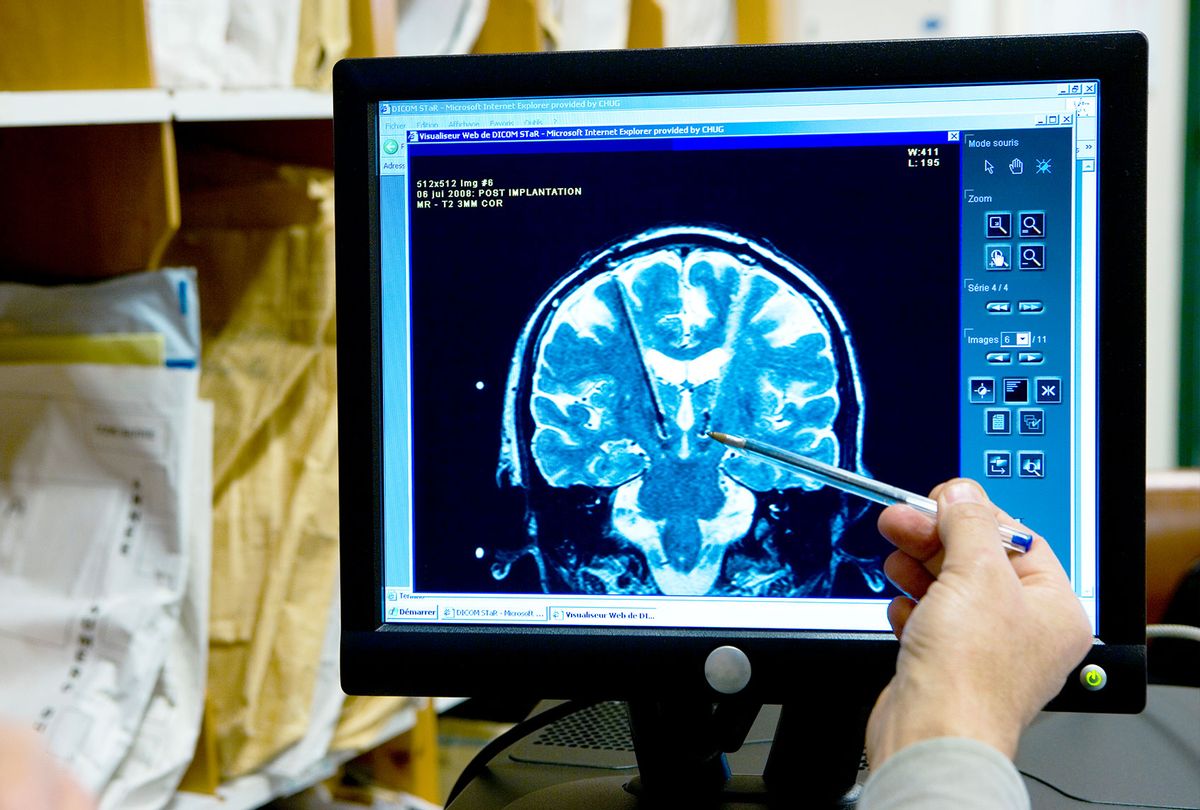 Grenoble University Hospital Michallon Hospital Department Of Neurology Unit 'Movement Disorder'. Mri Of A 30 Year Old Patient Suffering From Dystonia, Treated By A High Frequency Deep Brain Stimulation By Implantation Of Electrodes At The Level Of The Internal Paladium. These Electrodes Are Linked To A Neurostimulator, Box Implanted Under The Clavicle. (BSIP/UIG Via Getty Images)
--

A woman with severe depression has been nearly symptom-free for a year after a team of scientists at the University California–San Francisco implanted a device in her brain to interrupt depressive thoughts with a burst of electrical stimulation. The case is the first to demonstrate that highly targeted stimulation in a specific brain circuit involving depressive brain patterns can be an effective form of treatment for severe depression, which affects an estimated 5% of adults around the world.

The study on this treatment's success was published in the Oct. 4, 2021, issue of Nature Medicine, and has been hailed as a landmark moment. The intersection of neuroscience and a psychiatric disorder could pave the way for such a treatment to become more common in the future, especially for those who haven't had success with pharmaceutical treatments.

"This study points the way to a new paradigm that is desperately needed in psychiatry," said Andrew Krystal, PhD, professor of psychiatry and member of the UCSF Weill Institute for Neurosciences, in a news release. "We've developed a precision-medicine approach that has successfully managed our patient's treatment-resistant depression by identifying and modulating the circuit in her brain that's uniquely associated with her symptoms."

Previously, researchers have been unsuccessful using traditional deep brain stimulation (DBS) in similar treatments. That's because most devices only deliver constant electrical stimulation in one area of the brain. Historically, it has been a major challenge for scientists to target different areas of the brain in different people. This specific pacemaker for the brain proved to be a success with Sarah, who asked to be identified only by her first name, due to the discovery of a neural biomarker — a pattern of brain activity that senses the onset of symptoms — and the research team's ability to customize a new DBS device to respond to that specific pattern.

​​"What we believe is happening in this first patient is that something in the environment triggers a process that would elicit a negative feeling, the beginnings of what makes her depression worse. We pick it up before it becomes a significant depression and basically eliminate it," said Dr. Andrew Krystal, a UCSF psychiatrist and an author of the paper. "Our goal was not to make this patient happy. Our goal was to eliminate her depression."

"We were able to deliver this customized treatment to a patient with depression, and it alleviated her symptoms," said lead author Katherine Scangos, MD, PhD. "We haven't been able to do this the kind of personalized therapy previously in psychiatry."

Sarah said before the treatment, she was "at the end of the line."

"I was severely depressed," she said. "I could not see myself continuing if this was all I'd be able to do, if I could never move beyond this. It was not a life worth living."

While the treatment was personalized for Sarah's brain, scientists are hopeful that it is a treatment that could be scaled and replicated.

"There's still a lot of work to do," said Scangos. "We need to look at how these circuits vary across patients and repeat this work multiple times. And we need to see whether an individual's biomarker or brain circuit changes over time as the treatment continues."

Two more patients have been in the trial; Scangos hopes to eventually add nine more.

The idea of altering one's mood with electrical brain stimulation might sound like the premise for a science fiction plot, but the practice is nothing new. Electroconvulsive therapy was introduced in the 1930s, and has evolved into DBS, which seeks to correct a specific dysfunction in the brain by introducing precisely timed electric pulses. FDA approval for this specific treatment is still likely far off, but it sheds light on the possibility of it in the future.

"A person implanted with a closed-loop system to target their depressive episodes could find themselves unable to experience some depressive phenomenology when it is perfectly normal to experience this outcome, such as a funeral," said Frederic Gilbert Ph.D. Senior Lecturer in Ethics at the University of Tasmania, in an email to Salon. "A system program to administer a therapeutic response when detecting a specific biomarker will not capture faithfully the appropriateness of some context; automated invasive systems implanted in the brain might constantly step up in your decision-making . . . as a result, it might compromise you as a freely thinking agent."

Gilbert added there is the potential for misuse — and that raises novel moral questions.

"There are potential degrees of misuse of some of the neuro-data pumping out of the brain (some believe these neuro-data may be our hidden and secretive thoughts)," Gilbert said. "The possibility of biomarking neuronal activities with AI introduces the plausibility to identify a large range of future applications (e.g. predicting aggressive outburst, addictive impulse, etc). It raises questions about the moral, legal and medical obligations to prevent foreseeable and harmful behaviour."

For these reasons, Gilbert added, it's important "at all costs" to "keep human control in the loop," in both activation and control of one's own neuro-data.

Other philosophers have a different take. Laura Specker Sullivan, an assistant professor of philosophy at Fordham University, told Salon that it is instructive to think of DBS devices akin to selective serotonin reuptake inhibitors (SSRIs), a common class of antidepressants that includes drugs like Prozac.

"Most uses of deep brain stimulation for mood disorders like severe depression are going to be working just like SSRIs or any other depression treatment — where it's not making patients think a certain thing, but it's removing often the lethargy and depressed mood, and anhedonia that accompanies depression," Specker Sullivan said.

"In order to qualify for Deep Brain Stimulation, because it's invasive, you have to be someone who is treatment-resistant to all other more conservative or non-invasive forms of treatment," she noted. "So there are a lot of safeguards that go into figuring out whether or not a patient would be a good candidate for deep brain stimulation."

Specker Sullivan, who works with researchers who are doing DBS research, said it is done with a lot of responsibility.

"There's this worry of kind of changing a patient's sense of self or kind of feelings of authenticity, feeling like themselves, but that's not unique to DBS. But it is something that people have said, perhaps due to the speed with which DBS changes someone's mood, there might be a qualitative difference there."

Specker Sullivan added that she doesn't anticipate DBS becoming a common treatment for mood disorders, meaning that its ethical implications will not be of widespread concern.

"I have trouble seeing that as something that is going to be widespread in society," Specker Sullivan said. "I do think for conditions that are treatment-resistant, there is a good chance that we might see more use of deep brain stimulation — it's a tool that can kind of step in where pharmaceutical solutions don't work. But it's not going to be something that replaces pharmaceutical solutions, because those are inherently lower risk than something that's implanted surgically."