No surrender: Progressives must not compromise on tax hikes for the rich 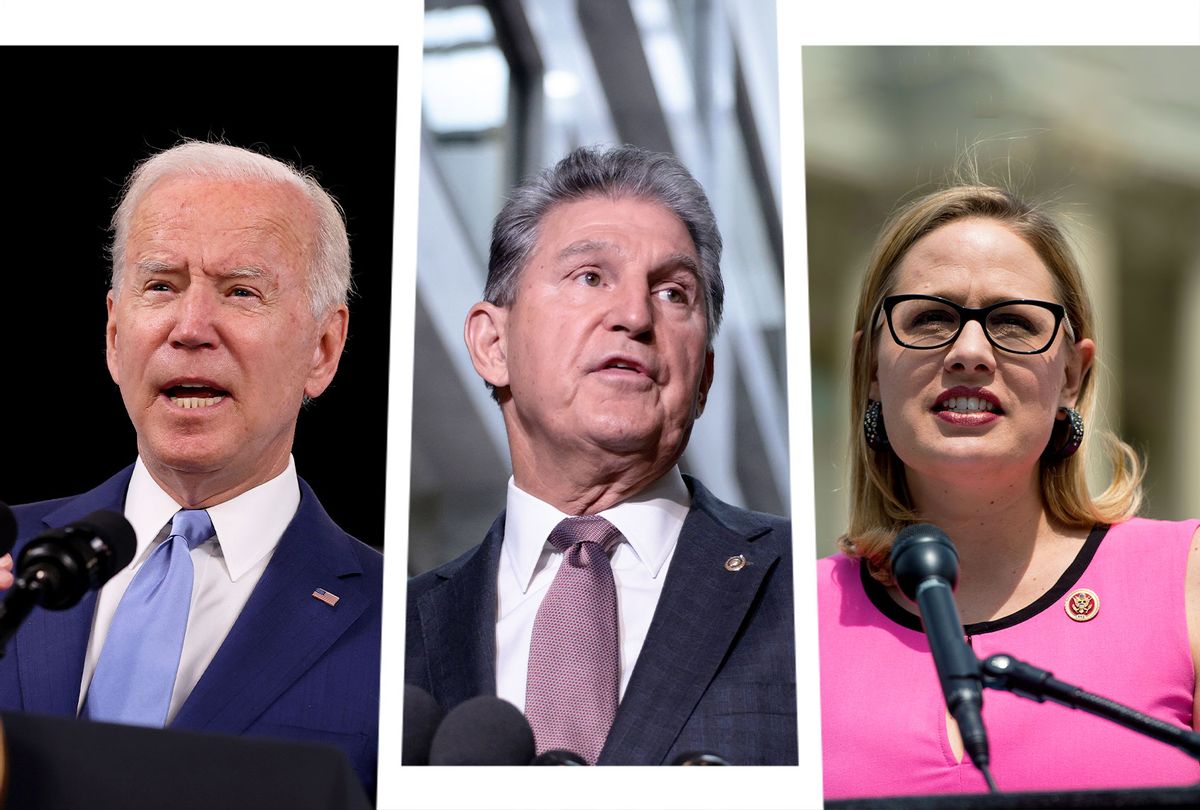 Sen. Kyrsten Sinema of Arizona was recently confronted at an airport by a group of protesters questioning her about her opposition to President Biden's Build Back Better Agenda. Despite many in the media parroting the idea that Sinema's opposition to Biden's plan is rooted in "centrism," in truth, Sinema is part of a group of ideologues on the fringes of the Democratic Party's congressional delegation who are threatening to blow up the president's agenda unless they get exactly what they want. This group is pushing an overwhelmingly unpopular agenda in order to please supporters out of step with the majority of voters, and endangering their party's electoral success in 2022 in the process.

Far more out of sync with mainstream Democrats than the supposedly radical progressive wing of the party, Sinema, Sen. Joe Manchin of West Virginia and a small group of House Democrats led by Rep. Josh Gottheimer of New Jersey are threatening to tank President Biden's agenda unless Congress first passes an inadequate, poorly designed bipartisan infrastructure bill funded (in part) by selling off our strategic oil reserves rather than raising taxes on billionaires, who have added $1.8 trillion to their collective net worth during the pandemic. The Pandora Papers leak has showcased exactly how the rich and powerful manipulate tax policies and financial systems to avoid taxes. Democrats who refuse to hold them accountable are culpable — and they and the Democratic Party will pay the cost at the ballot box in 2022.

It's time for Democrats to get serious about exorcising the rot from the heart of their party, and to stand up to these legislative hostage-takers. At this pivotal moment, the best and only way for Democrats to stand for the voters who put them in office is to stand publicly against the members of their caucus who are only looking out for wealthy investors and corporations.

It's time for progressive Democrats to back up their criticisms of the Wall Street wing of the Democratic Party with action — by embracing a long-overdue public showdown for the soul of the party. If Democrats ever want to win another election, they must make it clear that politicians who are willing to kill trillions of dollars of much-needed aid for American families to preserve low tax rates for their donors have no place in the Democratic Party. This is not a moment for progressives to come to a compromise with their corporate-backed peers — it's time to defeat them and reclaim the Democratic Party.

The two-bill process already agreed to — that is, splitting Biden's Build Back Better Agenda into a bipartisan infrastructure bill and a budget reconciliation bill — was a concession. The original plan was to pass the entire Biden agenda in one package. But Democrats like Manchin and Sinema refused, and successfully split the package in two based on the understanding that the two bills would proceed together. Having already gotten what they wanted, they're now demanding more. This will continue until progressives do something to stop them — until they go on the offensive.

Progressive Democrats have been doing the right thing by refusing to vote for the bipartisan infrastructure bill unless it's paired with a full $3.5 trillion reconciliation package, but they can and should do more. Each member of Congress has a significant public platform they can use to educate their constituents and the American people about what exactly is at stake. In this battle for the soul of the Democratic Party. They must use those platforms to get personal. This is a fight, and it's time for progressives to act like it.

Take Sen. Sinema, for example. There are five Democratic House members from Arizona, including two members of the Progressive Caucus. Rather than stand by and watch as Sinema blocks Medicare from negotiating drug prices and refuses to fund universal pre-K for Arizona children, those five members should make sure that every one of their voters knows exactly what their senator is doing. Call her out by name, and make her own her unpopular positions.

This kind of public confrontation is uncomfortable for politicians who value their relationships with their peers, but it's necessary. Legislating is a full-contact sport, and without significant public pressure, these Wall Street Democrats feel no need to answer to anyone except their wealthy donors and corporate lobbyists.

This is a fight progressives can and should win. The president of the United States is with them, and so are the vast majority of the American people and the bulk of Democratic primary voters. The shoe is on the other foot, at last. It's time for progressives to act with confidence and courage.

Erica Payne is founder and president of the Patriotic Millionaires and the co-author of "Tax the Rich! How Lies, Loopholes, and Lobbyists Make the Rich Even Richer."