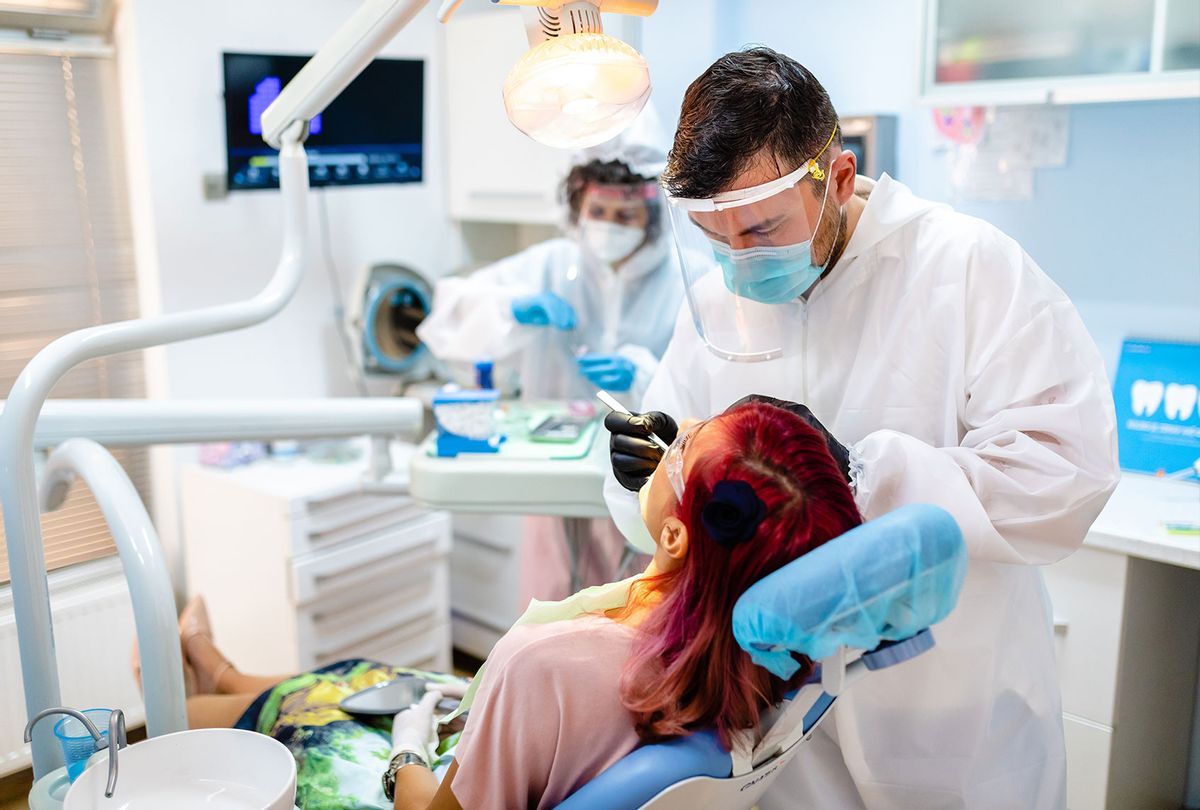 Dentist working with patient while dental assistant is helping around, both wearing a protective gowns, face masks and gloves during COVID-19 pandemic (Getty Images/Kosamtu)
--

This year, the Illinois legislature was considering measures to expand oral health treatment in a state where millions of people live in dental care deserts.

But when the Illinois State Dental Society met with key lawmakers virtually for its annual lobbying day in the spring, the proposals to allow dental hygienists to clean the teeth of certain underprivileged patients without a dentist seemed doomed.

State Sen. Dave Syverson, a Republican legislative leader, warned against the bills even if they sounded minor. "It's just getting the camel's nose under the tent," he said in an audio recording of the meeting obtained by KHN. "We'll have, before long, hygienists doing the work that, if they wanted to do, they should have gone to dental school for."

The senator added that he missed "the reception and the dinners that you guys host" and the "nice softball questions that I usually get" from the dental society's past president, who happens to be his first cousin.

The bills never made it out of committee.

The situation in Illinois is indicative of the types of legislative dynamics that play out when lower-level health care providers such as dental hygienists, nurse practitioners and optometrists try to gain greater autonomy and access to patients. And the fate of those Illinois bills illustrates the power that lobbying groups such as the Illinois dental society have in shaping policies on where health professionals can practice and who keeps the profits.

"There's always a struggle," said Margaret Langelier, a researcher for the Center for Health Workforce Studies at the University of Albany in New York. "We have orthopedists fighting podiatrists over who can take care of the ankle. We have psychiatrists fighting with clinical psychologists about who can prescribe and what they can prescribe. We have nurses fighting pharmacists over injections and vaccinations. It's the turf battles."

In 2015, the Illinois Dental Practice Act was revised to let hygienists treat low-income patients on Medicaid or without insurance in "public health settings" — such as schools, safety-net clinics and programs for mothers and children — without a dentist examining them or being on-site. Besides doing cleanings, the hygienists can take X-rays, place sealants and apply fluoride.

This year, lawmakers proposed bills that would have expanded those settings to include nursing homes, prisons and mobile dental vans.

The state dental society, in a memo to members, wrote that the fact it took years for hygienists to develop their public health training program shows "they have no real interest in providing access to care to needy patients."

As it is, Illinois trails many other states in allowing dental hygienists unsupervised contact with patients. In Colorado, on the extreme end, hygienists can own practices.

"It's just the nature of the beast politically in Illinois. The dental lobby isn't as strong in those other states," noted Margaret Vaughn, executive director of the Illinois Rural Health Association. "The Illinois State Dental Society is much more powerful, and they're much more organized than the hygienists are politically."

From 2015 to 2019, the dental society spent more than $55,000 on lobbying, for its annual gathering and meals for lawmakers, typically hosted at a swanky Italian spot near the state Capitol in Springfield, according to public disclosures. In the same period, the Illinois Dental Hygienists Association reported spending nothing in its lobbying reports. (Neither group has listed any expenditures since the beginning of 2020.)

The dental society has two exclusive lobbyists and four lobbying firms on contract, state records show. The hygienist group, meanwhile, employs no lobbyists and contracts with just one firm.

The dental society donates generously to both Republicans and Democrats. Its political action committee had nearly $742,000 in cash on hand as of June 30, according to Reform for Illinois' Sunshine Database. While the PAC has given $4,050 since 2014 to support the campaigns of state Sen. Melinda Bush, a Democrat who sponsored the nursing home bill, the database shows it has contributed far more to help elect Syverson, the senator who spoke at the conference. It has given more than $123,000 to his campaigns since 1999, with bigger annual gifts than to Bush.

"I receive contributions from many groups on both sides of issues," Syverson emailed KHN. "They are not contributing to influence my vote on a particular bill. In fact, if a PAC sent a check while we were negotiating or voting on an issue they are involved with, I would not accept it."

The hygienists' PAC gave $1,100 to the campaign committee of Bush, according to the database, but nothing to Syverson. Bush did not respond to requests for comment.

But Dave Marsh, a lobbyist for the Illinois dental society, said it would be dangerous for hygienists to treat nursing home residents, who are often elderly and sick.

"I just don't feel anybody with a two-year associate's degree is medically qualified to correct your health," Marsh added. "They're trained to clean teeth. They take a sharp little instrument and scrape your teeth. That's what they do. That's all they do."

He said the problem is not a shortage of dental professionals but, rather, a lack of dentists who can afford to accept Medicaid patients — and "nobody wants to raise taxes to actually be able to reimburse" dentists at higher rates.

He also pointed to the scarcity of research on the benefits of dental hygienists having more professional freedom.

Langelier acknowledged that little academic literature exists on this topic, in part because of inadequate data collection on oral health. But in 2016, a study she co-authored in Health Affairs found that, as dental hygienists gained more autonomy, fewer people had teeth removed because of decay or disease. And she said Medicaid data shows more children had dental visits as hygienists expanded their practice.

"I don't want this to be acrimonious," said Laura Scully, chair of the access-to-care committee of the state hygienists association. "I would like it to be more of a collaboration, because truly that's what this is about: getting together so we can help more people."

Karen Webster works as a dental hygienist for the Tri City Health Partnership, a free clinic in St. Charles, Illinois, about 40 miles west of Chicago. In the past, she could only briefly screen patients before scheduling them with one of the center's volunteer dentists, often months out.

"Imagine if you had a toothache and the doctor couldn't see you that day," she said, noting that her patients have low incomes. "They can't afford the services. They wait till something hurts."

But since becoming a public health dental hygienist, Webster now does immediate cleanings, takes X-rays she sends to teledentists for exams, and applies a solution called silver diamine fluoride that can halt tooth decay.

"The whole thing, start to finish, it's just a lot more efficient," she said.