Neoliberalism vs. the planet's future: It's a decisive moment — and there are signs of hope

People around the world understand that economic and political systems have failed. Will they demand real change? 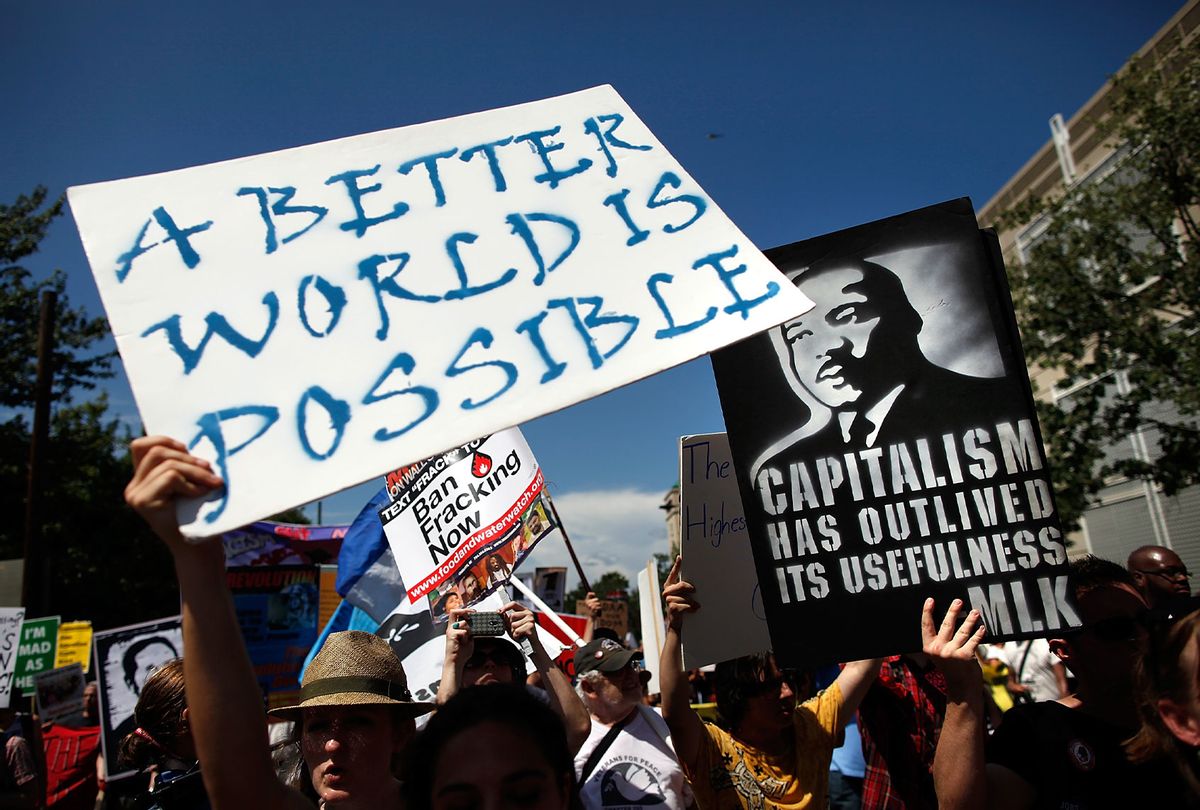 Protesters march through Uptown, the Charlotte the business district, before the start of the Democratic National Convention (DNC) September 2, 2012 in Charlotte, North Carolina. (Tom Pennington/Getty Images)
--

In country after country around the world, people are rising up to challenge entrenched, failing neoliberal political and economic systems, with mixed but sometimes promising results.

Progressive leaders in the U.S. Congress are refusing to back down on the Democrats' promises to American voters to reduce poverty, expand rights to health care, education and clean energy, and repair a shredded social safety net. After decades of tax cuts for the rich, they are also committed to raising taxes on wealthy Americans and corporations to pay for this popular agenda.

Germany has elected a ruling coalition of Social Democrats, Greens and Free Democrats that excludes the conservative Christian Democrats for the first time since 2000. The new government promises a $14 minimum wage, solar panels on all suitable roof space, 2% of land for wind farms and the closure of Germany's last coal-fired power plants by 2030.

Iraqis voted in an election that was called in response to a popular protest movement launched in October 2019 to challenge the endemic corruption of the post-2003 political class and its subservience to U.S. and Iranian interests. The protest movement was split between taking part in the election and boycotting it, but its candidates still won about 35 seats and will have a voice in parliament. The party of long-time Iraqi nationalist leader Muqtada al-Sadr won 73 seats, the largest of any single party, while Iranian-backed parties whose armed militias killed hundreds of protesters in 2019 lost popular support and many of their seats.

Chile's billionaire president, Sebastian Piñera, is being impeached after the Pandora Papers revealed details of bribery and tax evasion in his sale of a mining company, and he could face up to five years in prison. Mass street protests in 2019 forced Piñera to agree to a new constitution to replace the one written under the Pinochet military dictatorship, and a convention that includes representatives of indigenous and other marginalized communities has been elected to draft the constitution. Progressive parties and candidates are expected to do well in the general election in November.

Maybe the greatest success of people power has come in Bolivia. In 2020, only a year after a U.S.-backed right-wing military coup, a mass mobilization of mostly indigenous working people forced a new election, and the socialist MAS Party of Evo Morales was returned to power. Since then it has already introduced a new wealth tax and welfare payments to four million people to help eliminate hunger in Bolivia.

Since the 1970s, Western political and corporate leaders have peddled a quasi-religious belief in the power of "free markets" and unbridled capitalism to solve all the world's problems. This new "neoliberal" orthodoxy was a thinly disguised reversion to the systematic injustice of 19th-century laissez-faire capitalism, which led to gross inequality and poverty even in wealthy countries, famines that killed tens of millions of people in India and China, and horrific exploitation of the poor and vulnerable worldwide.

For most of the 20th century, Western countries gradually responded to the excesses and injustices of capitalism by using the power of government to redistribute wealth through progressive taxation and a growing public sector, and to ensure broader access to public goods like education and health care. This led to a gradual expansion of broadly shared prosperity in the United States and Western Europe through a strong public sector that balanced the power of private corporations and their owners.

The steadily growing shared prosperity of the post-World War II years in the West was derailed by a combination of factors, including the 1973 OPEC oil embargo, Richard Nixon's freeze on prices and wages, runaway inflation caused by dropping the gold standard, and then a second oil crisis after the 1979 Iranian Revolution.

Right-wing politicians led by Ronald Reagan in the U.S. and Margaret Thatcher in the U.K. blamed the power of organized labor and the public sector for the economic crisis. They launched a neoliberal counterrevolution to bust unions, shrink and privatize the public sector, cut taxes, deregulate industries and supposedly unleash "the magic of the market." Then they took credit for a return to economic growth that really owed more to the end of the oil crises.

The U.S. and Britain used their economic, military and media power to spread their neoliberal gospel across the world. Chile's experiment in neoliberalism under Gen. Augusto Pinochet's military dictatorship became a model for U.S. efforts to roll back the "pink tide" in Latin America. When the Soviet Union and Eastern Europe opened to the West at the end of the Cold War, it was the extreme, neoliberal brand of capitalism that Western economists imposed as "shock therapy" to privatize state-owned enterprises and open countries to Western corporations.

In the U.S., the mass media shy away from the word "neoliberalism" to describe the changes in society since the 1980s. They describe its effects in less systemic terms, as globalization, privatization, deregulation, consumerism and so on, without calling attention to their common ideological roots. This allows them to treat its impacts as separate, unconnected problems: poverty and inequality, mass incarceration, environmental degradation, ballooning debt, dark money and corporate influence in politics, disinvestment in public services, declines in public health, permanent war, and record military spending.

After a generation of systematic neoliberal control, it is now obvious to people all over the world that neoliberalism has utterly failed to solve the world's problems. As many predicted all along, it has just enabled the rich to get much, much richer, while structural and even existential problems remain unsolved.

Even once people have grasped the self-serving, predatory nature of this system that has overtaken political and economic life, many still fall victim to the demoralization and powerlessness that are among its most insidious products, brainwashed to see themselves only as individuals and consumers, instead of as active and collectively powerful citizens.

In effect, confronting neoliberalism — whether as individuals, groups, communities or countries — requires a two-step process. First, we must understand the nature of the beast that has us and the world in its grip, whatever we choose to call it. Second, we must overcome our own demoralization and powerlessness, and rekindle our collective power as political and economic actors to build the better world we know is possible.

We will see that collective power in the streets and the suites at COP26 in Glasgow (which opens Oct. 31 and runs through Nov. 12), when the world's leaders will gather to confront the reality that neoliberalism has allowed corporate profits to trump rational responses to the devastating impact of fossil fuels on the Earth's climate. Extinction Rebellion and other groups will be in the streets in Glasgow, demanding the long-delayed action that is required to solve the problem, including an end to net carbon emissions by 2025.

While scientists warned us for decades what the result would be, political and business leaders have peddled their neoliberal snake oil to keep filling their coffers at the expense of the future of life on Earth. If we fail to stop them now, living conditions will keep deteriorating for people everywhere, as the natural world our lives depend on is washed out from under our feet, goes up in smoke and, species by species, dies and disappears forever.

The COVID pandemic is another real-world case study on the impact of neoliberalism. As the official global death toll reaches 5 million — with many more deaths unreported — rich countries are still hoarding vaccines, drug companies are reaping a bonanza of profits from vaccines and new drugs, and the lethal, devastating injustice of the entire neoliberal "market" system is laid bare for the whole world to see. Calls for a "people's vaccine" and "vaccine justice" are challenging what has now been termed "vaccine apartheid."

In the 1980s, British Prime Minister Margaret Thatcher often told the world, "There is no alternative" to the neoliberal order that she and Reagan were unleashing. After only one or two generations, the self-serving insanity they prescribed and the crises it has caused have made it a question of survival for humanity to find alternatives.

Around the world, ordinary people are rising up to demand real change. The people of Iraq, Chile and Bolivia have overcome the incredible traumas inflicted on them to take to the streets by the thousands and demand better government. Americans should likewise demand that our government stop wasting trillions of dollars to militarize the world and destroy countries like Afghanistan and Iraq, and start solving our real problems, both here and abroad.

People around the world understand the nature of the problems we face better than we did a generation or even a decade ago. Now we must overcome demoralization and powerlessness in order to act. It helps to understand that the demoralization and powerlessness we may feel are themselves products of this neoliberal system, and that simply overcoming them is a victory in itself.

As we reject the inevitability of neoliberalism and Thatcher's lie that there is no alternative, we must also reject the lie that we are just passive, powerless consumers. As human beings, we have the same collective power that human beings have always had to build a better world for ourselves and our children — and now is the time to harness that power.