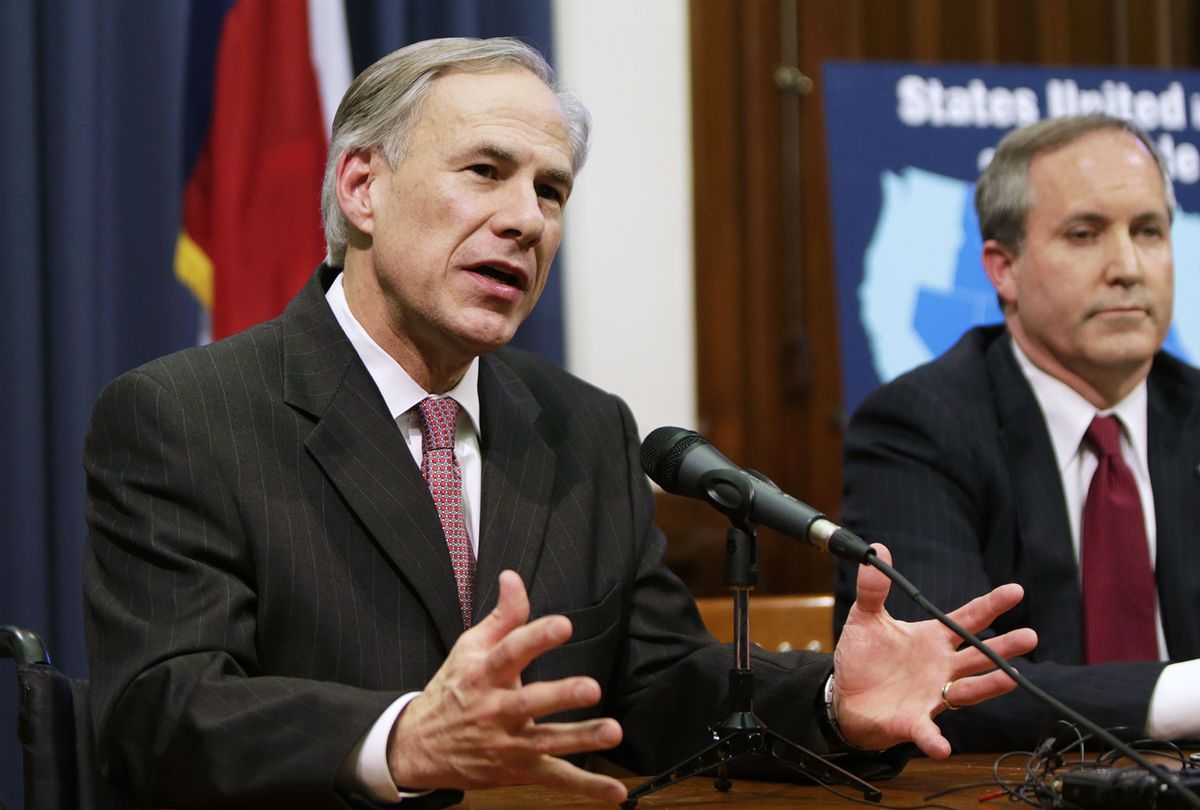 Texas Gov. Greg Abbott on Monday signed off on new congressional and legislative districts produced by the Republican-dominated legislature to protect its majority.

Texas gained two congressional seats in Congress after the 2020 U.S. census, with people of color making up 95% of the state's population growth. But Republican lawmakers targeted communities with large numbers of voters of color, which are more likely to vote Democratic, and "grafted them onto massive districts dominated by white voters" while also making more districts less competitive, according to the Texas Tribune.

Texas has a long history of racial gerrymanders. Though the state was banned under the 1965 Voting Rights Act from discriminating against voters of color, Texas has been found in violation of federal law after every redistricting cycle since the law was passed. The Supreme Court in 2013 gutted a section of the law requiring states with a history of racial discrimination to pre-clear electoral changes, including new maps, with the Justice Department. The court later ruled that federal courts have no jurisdiction over partisan gerrymandering, though they can still intervene in cases of blatant racial gerrymanders.

State Sen. Joan Huffman, a Republican who led the redistricting process, insisted that the lawmakers who drew the news maps are "race blind."

"Color blind has two meanings — one that decisions are made without racial bias. These maps have obviously been made with racial bias," retired teacher Elisa Gonzalez said at a hearing. "However, this committee is also color blind in terms of being deliberately blind to citizens of color by making maps that silence their impact."

Valerie Street, president of the voting rights group Our Vote Texas, said that Texans of color feel that their voting power has been "taken from us."

"It's very difficult to try to convince Texans that they are truly and fairly represented in a map where our voice has been silenced, where our voting strength has been diminished," Street told the Texas Tribune. "You can't say you represent us if you don't see us."

The new maps have already sparked a federal lawsuit from Latino voting rights groups, who allege that the redistricting plan violates the Voting Rights Act and unconstitutionally dilutes the voting power of Latino voters.

"Despite having only recently been found liable by a federal court for intentional racial discrimination in redistricting, Texas has once again adopted plans that dilute Latino voting strength," said Nina Perales, vice president of litigation for the Mexican American Legal Defense and Educational Fund, which successfully sued the state over its maps a decade earlier. "The new redistricting plans are an unlawful attempt to thwart the changing Texas electorate and should be struck down."

Another federal lawsuit filed by the advocacy group Voto Latino and backed by the National Redistricting Action Fund was filed Monday, and similarly accuses the state of violating the Voting Rights Act.

"We simply cannot allow Governor Abbott to deny Texans a free and fair election through these undemocratic, gerrymandered maps that fail spectacularly to represent the state's growing communities of color," former U.S. Attorney General Eric Holder, chairman of the National Democratic Redistricting Committee, said in a statement. "Abbott is running away from a fair fight and is doing everything possible to avoid elections with a map that properly reflects Texas' significant demographic growth over the past decade. These communities deserve a new map that complies with the Voting Rights Act and puts power back in the hands of Texans."

The maps would appear to solidify the Republican grip on the state's electorate. Though Donald Trump won Texas with 52% of the popular vote, he would have carried 65% of the new congressional districts. The map also protects Republicans in the state Senate. Trump carried 16 state Senate districts in 2020 while President Joe Biden carried 15, but Trump would have won 19 districts under the new map.

"With his signature today, Governor Abbott continues the shameful five-decade-long tradition of ramming through extremely gerrymandered maps in an undemocratic process," Anthony Gutierrez, the executive director of the nonpartisan good-government group Common Cause Texas, said in a statement. Gutierrez added: "None of the maps accurately reflect the changing population of our state. Instead, these maps are intentionally designed to silence Black and Brown voters from having a voice in our democracy and erase their representation in our government."