Manchin's means-testing requirement is a recipe for building back worse 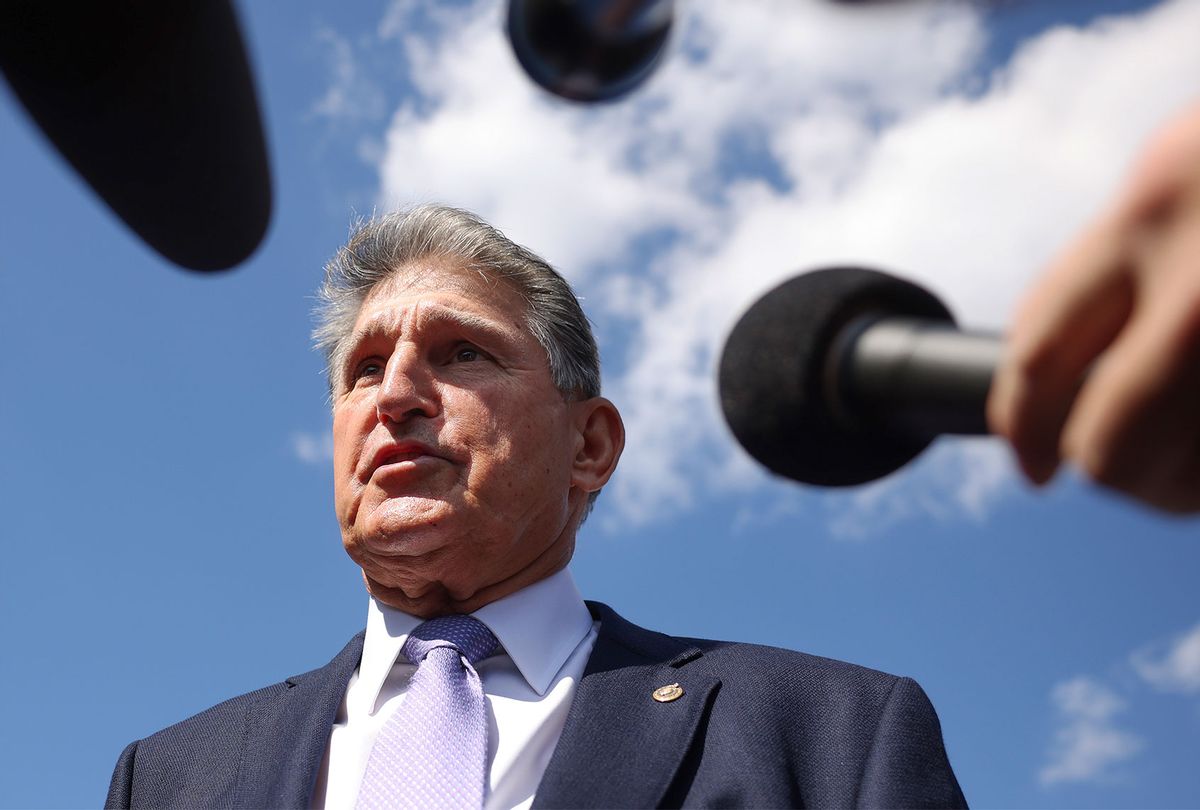 Sen. Joe Manchin (D-WV) speaks to reporters outside of the U.S. Capitol on September 30, 2021 in Washington, DC. (Kevin Dietsch/Getty Images)
--

President Joe Biden's Build Back Better legislation would bring the United States into the 21st century, finally enacting programs that other industrialized nations have had for a very long time. These include children's allowances in the form of tax credits, paid family and medical leave, free post-secondary education, expanded Medicare, home and community-based services, and so much more.

The bill would be among the most transformative in American history. It would cement Biden's legacy alongside Presidents Franklin Roosevelt and Lyndon Johnson. But not if Senator Joe Manchin (D-WV), who claims that the bill would promote a so-called "entitlement society," forces work requirements and means-testing.

Manchin's demands for work requirements and means-testing would save money largely by making federal programs inaccessible to many who need them, including those who need them the most. Those most in need often have the most trouble navigating complicated and burdensome eligibility requirements, because they generally lack the necessary time, resources, and family support. Experience teaches that much of the money saved on benefits would be spent on wasteful and intrusive administration.

Moreover, limiting eligibility to a small group who must prove to the rest of us that they really deserve the benefits will make those programs far more politically vulnerable. Knowingly, the late Wilbur Cohen, known as the father of Social Security and Medicare, remarked, "a program that is only for the poor — one that has nothing in it for the middle income and the upper income — is, in the long run, a program the American public won't support." For all these reasons, Cohen understood, as he often succinctly phrased it, "Programs for the poor make poor programs."

At first glance, Manchin's demands for stringent means-testing and work requirements may seem like a responsible effort to target limited resources. But a close look at the history of social welfare policy reveals that the restrictions are the latest chapter in an ugly history of treating some as less deserving than others.

While our Declaration of Independence, as well as virtually every religion, asserts that all of us are created equal, that has not been the view of some of the most powerful among us. Andrew Carnegie and John D. Rockefeller, two of the richest men in human history, believed in what was called Social Darwinism, where some people are inherently worthier than others, due to "better" genes. They saw themselves as the fittest, and the poor as inherently unworthy and lazy people who needed their "betters" to push them to make something of their lives.

Throughout American history, some people, whether simply down on their luck or different from the majority, have been stereotyped as immoral, lazy, shiftless — in short, undeserving. Carnegie stated that "It were better for mankind that the millions of the rich were thrown into the sea than so spent as to encourage the slothful, the drunken, the unworthy."

Nor is that simply the view of a few wealthy and powerful individuals. The notion that some people are undeserving is a strong undercurrent of conservative, anti-government thinking. It is embodied in government action and inaction whenever conservatives have their way.

This view demands hypersensitivity to ensure that those who receive government benefits do not take advantage of the rest of us. It insists that the only people worthy of government assistance are those can who surmount the obstacles government places in their way.

That attitude can be seen in the harsh, inhumane workhouses and poorhouses that used to be common features of life in Great Britain and the United States. These institutions have been described as "designed to punish people for their poverty and, hypothetically, make being poor so horrible that people would continue to work at all costs." More succinctly, a nineteenth century activist against these institutions called them "prisons for the poor."

The attitude can be seen in the nineteenth century debate over free public education. John Randolph, a wealthy Virginia slaveowner and politician, expressed his horror at the idea of universal free public education with words that echo sentiments one still hears today:

"Among the strange notions that have been broached since I have been on the political theatre, there is one which has lately seized the minds of men, that all things must be done for them by the government, and that they are to do nothing for themselves."

In 1935, when President Roosevelt proposed the creation of Social Security, opponents made similar arguments. Despite the fact that Social Security is earned, the opponents still claimed it would create dependency. As part of their fearmongering, they employed a new frightening epithet as shorthand for all of their concerns. Social Security, its opponents claimed, was socialism.

Nor has that attitude disappeared. We see it in talk of "entitlements," and "makers" and "takers,"  as well as in claims that government spending creates dependency and that the Democratic agenda is socialist.

Democrats must resist the demands for work requirements and means-testing, if they truly want to build back better. They must resist the idea that government should only help the most destitute among us, not the working class or the middle class. In arguing for this more expansive help, they must remind those opposing them how much government has always helped the most advantaged among us.

Those who object to universal government help, who see themselves as having made it on their own, are often those who have been born with privilege, who benefit from government on a daily basis. They turn a blind eye to the highways, courts, police, military, and all the other public expenditures from which they disproportionately benefit.

In a 1938 radio address, President Roosevelt compellingly explained the reality that it is the wealthy who government has always benefited the most:

"The first to turn to Government, the first to receive protection from Government, were not the poor and the lowly — those who had no resources other than their daily earnings — but the rich and the strong. Beginning in the nineteenth century, the United States passed protective laws designed, in the main, to give security to property owners, to industrialists, to merchants and to bankers….Because it has become increasingly difficult for individuals to build their own security single-handed, Government must now step in and help them lay the foundation stones, just as Government in the past has helped lay the foundation of business and industry."

FDR understood that government involves all of us coming together to protect each of us against risks over which we have no control. Democrats need to heed FDR's words and pass a Build Back Better Act that reflects his view of the world: A view that work requirements are unnecessary in a world where good paying jobs are available to all. A view that universal programs that encourage work and prevent people from falling into poverty are far preferable to means-tested programs that are demeaning and trap those already in poverty.

The answer to concern that the wealthy will receive benefits they don't need is to bring back a truly progressive income tax and a substantial estate tax. The problem is not the wealthy receiving the same benefits as the rest of us, but rather our dysfunctional tax system that absolves them of the responsibility to contribute their fair share towards the common good.

Our nation is highly polarized. But one issue that unites us is Social Security. Democrats, Republicans, and independents all support protecting and expanding benefits. That is because Social Security embodies Roosevelt's world view and the understanding he learned from his devastating experience with polio.

FDR saw clearly that all of us face risks. He believed that government should help us address those risks together. He was physically dependent on others, and understood how demeaning it was to have to continually prove your need. He knew how crushing it is to the spirit to feel like a failure, unable to get by without help.

FDR understood that we are at our strongest when we recognize our common humanity. Having suffered from polio and succeeded in spite of it, he understood how important it was to design government programs to be uplifting.

Today's Democrats should embrace Roosevelt's insight. They ignore his wisdom at their peril. The right-wing activist Grover Norquist once expressed his desire to reduce government to "the size where I can drag it into the bathroom and drown it in the bathtub." If Manchin forces work requirements and intrusive, demeaning means tests, it will be substantially easier for Republicans to drown Biden's legacy in the bathtub once they are back in control.

To resist that fate, Democrats must convince Manchin to build back better for everyone.