Celebrating Day of the Dead with a spread of beloved recipes 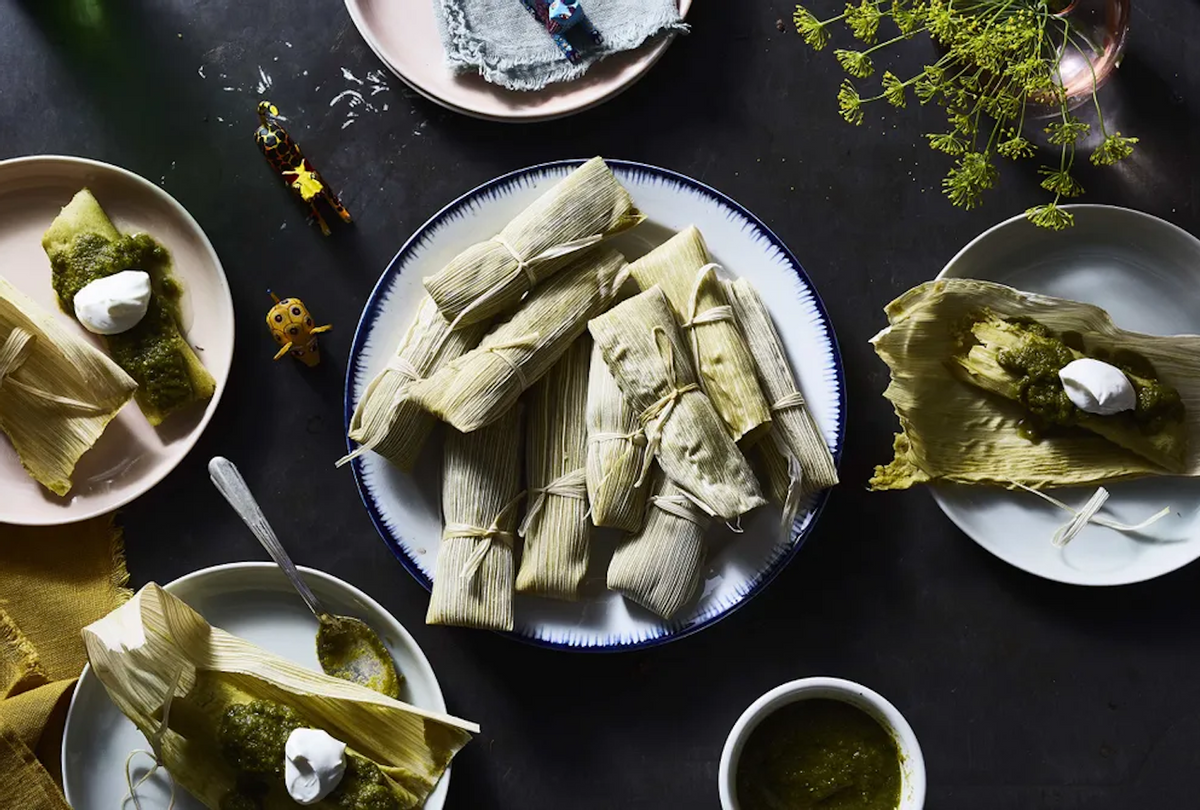 Mexico's Dia De Los Muertos (Day of the Dead) celebrates loved ones who have passed. Some families put together an ofrenda, an altar created in their honor, featuring photographs and the deceased's favorite foods and drinks. Other families picnic at the burial sites of their loved ones. "When you travel to the cemetery to feast and celebrate the lives of your ancestors," Mexican Chef Tello Carreon (formerly of Nixta in St. Louis) says, "It's an experience you don't really forget."

While Mexico is known for its street food, the variety of vendors setting up shop depends on the day of the week and time of the day. You might be craving esquites, a cup brimming with boiled corn off the cob, dressed in a combination of lime, chile, salt, butter, mayo, and cheese; however, if it's mid-day or earlier, you'll have to wait until after dinner to get your fix. That's not the case with tamales. Wrapped in corn husk and filled with meats, cheese, or sweets, tamales can be found on every corner, throughout the day. This inexpensive food is commonly grabbed on the go for breakfast — en route to a Dia De Los Muertos ofrenda, perhaps — with some vendors offering it up in a bolillo (a Mexican baguette, if you will).

"The best dish we made in celebrating Day of the Dead was the tamales," says Carreon. (Find his recipe here or above.) "As a child, we used chicken, pork or beef stuffing, and sweetened the corn dough with strawberry and banana puree. I love all of the different variations of the dish." According to Delia Cosentino, an Associate Professor of Art History and Architecture at DePaul University who specializes in the visual culture of Mexico, "The mouth-watering smells of favorite foods are believed to draw in the dead to such celebrations in their honor."

Mexico's tamale vendors often sell other masa-based goods, too, namely masa-based drinks like atole and champurrado. Champurrado is a chocolate-flavored atole, a warm Mexican beverage, chock full of ingredients indigenous to Mexico: masa, chocolate, and canela (cinnamon). The beverage is introduced into the diets of many Mexicans at an early age, and pairs perfectly with adult comfort food like tamales and cake.

Maybe the thought of drinking corn masa doesn't sound appealing to you. To get over the foreign concept, think of it as a cereal-infused milk. You only need to look at the popularity of Momofuku Milk Bar's cereal-flavored soft serve to see that it's not a strange option. "Champurrado has an ancient and deeply rooted spiritual meaning because the drink dates back to the Aztec and Maya civilizations," says Yanni Sanchez, chef at Chicago's Bar Takito. "[It] will continue to increase in popularity." (See Yanni's recipe, here or above.)

"Traditional Mexican food is anything corn-based," says Cosentino. "Such as the masa used to make a tamale and champurrado." She explains how these kinds of ingredients highlight a deep affinity with the ritual's indigenous roots. Festivals honoring the underworld could be found in Mexico well before European invasion. The combination of these two aspects of indigenous culture make Dia De Los Muertos truly special. Cosentino explains how particular food and drinks marking the occasion often vary across Mexico, because regional celebrations are often different from one another. But items like mole, pan de muertos, and atole transcend regional boundaries.

The holiday is not only a personal celebration of family members who have passed on, but a demonstration of ancestral, pre-colonial pride, an appreciation of our indigenous roots. Nothing embodies this more than champurrado with it's homegrown ingredients that have largely gone unchanged through the centuries. Said simply, champurrado — and many other corn-based Mexican foods, like tamalas — transcend the living and the dead.

Food has always been a unifier — no news there. But when someone goes through the painstaking task of creating something delicious for a person who can no longer eat it, you realize exactly how magical food can be. And nothing highlights this sentiment more than the Day of the Dead. These recipes are special because they come from chefs with Mexican roots, who grew up on the tradition of Dia de Los Muertos. It's not something that they admired from afar and learned to create. They lived the experience of making food, alongside other family members, for someone who was gone but not forgotten. As a result of those memories, these recipes blossomed.

Day of the Dead recipes

Celebrate Day of the Dead with a cup of spicy hot chocolate. This recipe gets a kick from both chipotle powder and whole cinnamon sticks, which both infuse the milky chocolate mixture with natural spice and a little bit of heat.

Tamales are a go-to main course for Day of the Dead feasts, and while there are plenty of variations and fillings, try this chicken version. Our editors recommend using boneless, skinless chicken thighs for the best flavor; the meat is amped up with our homemade three-ingredient salsa verde.

Sweet bread is a staple during día de los muertos celebrations. This version is flavored with anise seeds and orange zest, plus a little bit of vanilla extract.

Another version of tamales worthy of a family-wide celebration is these pork-filled ones. We favor pork butt, which has plenty of fat and flavor to keep things interesting. To make the masa, the corn-based dough for the tamales, you'll need pork lard, leftover pork broth (from cooking the pork butter for the filling), and instant masa, a quick-cooking corn flour.

Although it's not exactly a traditional recipe for Day of the Dead, enjoy this meat-free, modern-day twist on a tamale entrée for your Dia De Los Muertos feast. "It's rich and flavorful without being terribly heavy, sure to please meat-eaters and vegetarians alike," writes recipe developer Jarrett Melendez.

"Like enchiladas that have shrugged off their heavy winter coats, entomatadas are a bit lighter, milder, and sweeter, well-suited to warming weather and earlier hours, to a glass of orange juice rather than a bottle of beer," writes recipe developer Sarah Jampel. It's exactly what we want to eat in early November as the leaves start to change and the temperature drops.

Mole is a work of patience and art, and traditionally, it has a long (LONG) list of ingredients. Food52 resident Rick Martinez was determined to make a mole that was just as flavorful and just as complex as recipes developed by generations of family members before him...but also simpler, quicker-cooking, and with far fewer ingredients. We think he nailed it, as always.

You've probably come across dozens, if not hundreds, if not thousands of stellar guacamole recipes in your life. The list of ingredients in this recipe won't surprise you — avocados, white onion, cilantro, and jalapeno peppers — but Roberto Santibañez's technique for getting the texture just right is what sets this one apart from the rest.

End your Day of the Dead celebration on a sweet note with our recipe for a classic creamy flan covered in a rich caramel sauce.

Resident and recipe developer Rick Martinez explains how his family used to make dozens of red pork tamales for Christmas every year. Taking a page from their book, his updated version calls for blue corn masa, a spiced brown sugar and chile syrup, and a cool and rich crema.

It's not really a proper Day of the Dead party without a little (okay, a lot) of tequila. Sure, you can drink it straight up or in the form of a margarita, but we also love this riff on the classic Old-Fashioned cocktail that uses tequila and agave syrup in place of the usual bourbon and simple syrup.

Churros are a delightful sweet snack, but somehow they taste extra-special on this Mexican holiday. Make sure to roll the crispy, golden brown dough in a mixture of cinnamon sugar as soon as it comes out of the fryer, as the residual hot oil will help the sugar to stick.

For an even sweeter spin on Mexican sweet buns, recipe developer Sarah Jampel had the genius idea to top brioche buns with a thin, buttery cookie. It's hard to imagine that we'll ever return to our old ways.

This is a traditional Latin American drink, but it's been easily embraced as a non-alcoholic (and naturally dairy-free!) drink for festive occasions, like Day of the Dead, in Mexican culture. The base is made with a combination of brown rice and blanched almonds, plus agave for sweetness and cinnamon for that essential hint of spice.

"Buckwheat flour adds a woodsy flavor and pleasing grain to this not-too-sweet loaf with currants, walnuts, and nutmeg," writes recipe developer Alice Merdich. But just don't take her word for it. Try baking this for breakfast or as a snack for Dia de Los Muertos.

Instead of the thick, twisted sticks of dough that we usually associate with churros, these adorable bite-sized churros are formed into small balls and deep-fried, then promptly rolled in cinnamon and sugar (of course), plus cayenne pepper and cocoa powder.