Despite the pandemic, human health overall is better than it's ever been. Here's why

The pandemic has cast a pallor over humanity. Yet surprisingly, it's a healthier time to be alive than ever 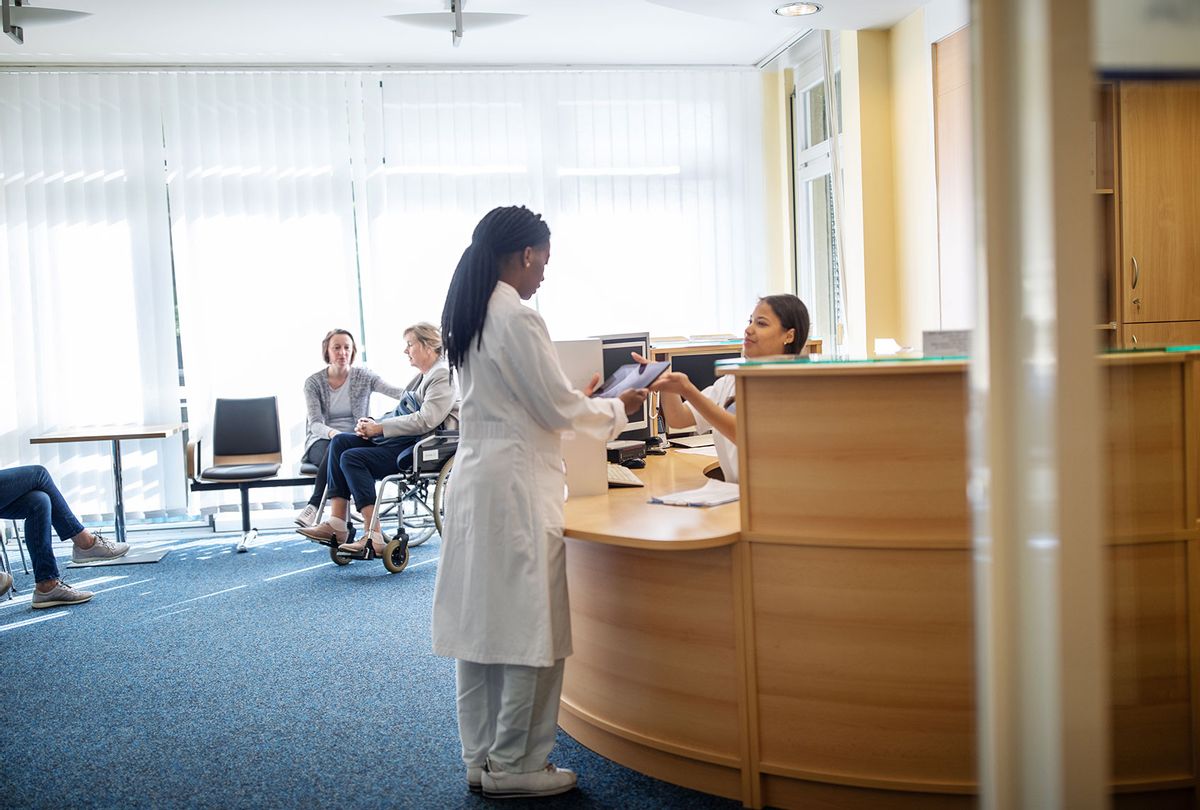 In April 2020, the United Nations University World Institute for Development Economics Research released a working paper esti­mating that the economic consequences of the COVID-19 pandemic could drive up to half a billion people around the world into poverty, which would be the first increase in global poverty since 1990. This reflects some­thing paradoxical about the COVID-19 moment: on one hand, it felt like a time of unprecedented disruption. But on the other hand, that an increase in global poverty could be seen as such a profound anomaly speaks to the fact that when the pandemic appeared, in many respects the world had never been better off or healthier. In a number of key areas—life expectancy, rises in education and literacy, reductions in preventable diseases such as HIV/AIDS— the 21st century was, and is, a more favorable time to be alive than any other point in recorded history.

Right now, it can be easy to overlook our histor­ical successes. On any given day, we are likelier to hear a news anchor report that 37 people were killed in a terrorist attack than we are to hear her say that global poverty continued to decline, as it has for the last 30 years. Yet news of the decline in global poverty is far more representative of the trajectory of life for most people in the 21st century than news of a terrorist attack is. Seeing this requires us to look beyond the moment, when our feelings about our health are clouded by the soupy fog of COVID-19, and view the sweep of history, seeing how the decades leading up to now have ushered in unparalleled progress.

Seeing the scale of the progress we have made in building a healthier world raises questions about the drivers of this success. A good way to find the answers is by looking at the last century. How our past shaped our present holds lessons for how we might shape our future, and how to continue the positive upward trend in human health.

So how does life in the first year of the 20th century com­pare to now? In some respects, discussing 1900 and discussing today is like talking about two different worlds. But among the most striking measures of progress is the rise in life expectancy. In the United States, a child born in 1900 could on average expect to live to about age 47. Today, that child can expect to live to about age 79.

Why this difference? The answer most people would give is sim­ple: better medicine. It is a compelling answer, but it is only partially true. One of the reasons life expectancy is among the most useful measures of overall population health is because no single factor accounts for it. Life expectancy is the product of the con­text in which our lives unfold. So while it is true that the last century saw remarkable achievements in medicine—from polio vaccination to, more recently, advanced treatments for HIV/AIDS—medicine alone cannot account for such a significant, multi-decade gain in life expectancy. Something deeper is at work.

Let us, then, compare the life of someone born in 1900 with the life of someone born today. In the years leading up to 1900, the U.S. industrialized and urbanized in the wake of the Civil War. Concurrent with these trends came waves of immigrants hoping to settle in this land of rapidly growing opportunity. They came for better lives, yet for many the opportunity of America was interwoven with hardship.

Imagine, then, a child is born in 1900 to immigrant parents in New York City. His parents are poor, lacking money for basic ameni­ties, including clean clothes and nutritious food. Like so many others, they live in cheap, overcrowded tenement housing, where necessities such as electricity and proper ventilation are hard to come by. In this environment, the boy is often malnourished and sick. Later, instead of getting a good education, he begins working odd jobs to earn money for his family. They are dangerous jobs, which result in the child sustaining a number of injuries. With the outbreak of World War I, he sees military service as both a patriotic duty and a way out of poverty. At 16, he lies about his age in order to enlist, seeing combat in the final year of the war, which leaves him with a case of what was then called shell shock, but which we now call post-traumatic stress disorder (PTSD).

After the war, he returns home, and eventually establishes himself as a grocer, working his way up to a managerial position. He dreams of buying his own store, but then the U.S. is hit with the eco­nomic shock of the Great Depression, which leaves him penniless and unemployed. These challenges worsen his mental health struggles, and he begins to drink heavily. All this leads to him passing away in his early forties from the effects of alcoholism, despair, and a lifetime of injury and poor health.

Were we to meet this man near the end of his life, we would likely ascribe his decline to a series of poor choices on his part, and perhaps to his lack of access to adequate healthcare. But when we examine the full range of his experience, we see how his poor health was more fundamentally a product of the historical moment in which he lived. Poverty, urbanization, poor housing, inability to access education and nutritious food, lack of a social safety net and legal protections for workers, war, and economic crisis all created a context for poor health to emerge. These forces were at the heart of Americans' lower life expectancy at the start of the 20th century.

The same forces are just as influential in our own time, but the nature of their influence has changed as conditions have improved.

Let us consider a child born in the United States in 1990. This child grows up in a middle-class household. Her family is not rich, but they have enough so that she never lacks food, clothes, or other basic necessities. Naturally, this means her home has electricity, adequate space, and, later on, Internet access. While she works summer jobs as a teen and young adult, she does so for pocket money, not from a need to support her family. She attends college and quickly transitions to a professional career as a doc­tor. She marries, has three kids, and currently lives a comfortable life in New Jersey, where she enjoys multiple hobbies in her spare time, takes yearly vacations, and suffers from no major health issues.

The contrast between her life and that of the child born in 1900 is stark. The child in 1900 had a future clouded by disadvantage, making a healthy life difficult for him to attain. Yet for the child born in 1990, having a healthy life seemed a relatively straightforward matter, a path of unbroken progress. But this path was straightforward only because the state of the world in the last 30 years made it so. Lack of large-scale, global conflict meant many young people could grow up without facing the trauma of war. A strong economy meant more people could access the basic resources necessary for health. The Internet democratized access to information, supplementing the education available in public schools. Networks of legal protections for workers made jobs less dangerous than they were a hundred years ago. If the child born in 1990 had needed it, there was a social safety net in place to help her through hard times.

These changes, far more than any medical innovations, account for improvements in health and life expectancy. It is true that between 1900 and 1990 tremendous advances were made in the field of med­icine. Had the child born in 1990 become sick, she would have had access to better treatments than the child born in 1900. But more sig­nificant for health were the changes in how we live our lives, changes that were shaped by social, economic, and political forces. Health means not needing medicine because we do not become sick in the first place. Whether we get sick in the first place depends largely on our quality of life and the forces that shape it. The influence of these forces is like air—easy to overlook precisely because it is so ubiquitous. It is what we encounter each day, with direct implications for the health of our bodies and minds.

Seen in real time, these forces can be subtle and easy to miss. But there are times when their influence converges at precise historical moments to draw a sharp line between good health and bad. When these moments arise, no special insight is necessary to see that events are being steered by large-scale forces. COVID-19 was such a moment. It was a time when everyone could see how politics, the economy, racial injustice, new technologies, and shift­ing ideas of national and global solidarity intersected to shape health. Even as we pursued medical solutions to the crisis, this broader con­text was never far from mind.

During COVID-19, it was jarring to realize that something as inti­mate as our health could be so much at the mercy of seemingly abstract forces. In a sense, it was akin to feeling the influence of such forces during wartime, when their effect on health is arguably most direct.

Which brings us back to our earlier question about the reasons behind our improved life expectancy. Broadly speaking, the answer is that our longer lives are due to better living standards generated by the social, political, and industrial trends that drive global economic development. The unfolding of these trends over the last 150 years has helped lower the cost of goods and broaden access to the funds that purchase them. It is a simple calculation: better health depends on our ability to access the basic resources that allow us to live and thrive. These resources cost money. The cheaper they are, the more easily we will be able to buy them, and the healthier we will be.

This leads us to today, and the conclusion that I draw here: the most important step toward bet­ter health for all is choosing to no longer accept the conditions that undermine it. While there is much about the status quo that is good and makes us healthier, not everyone has shared this progress equally. Creating a healthier world will not require us to dismantle all that came before, much of which is responsible for our healthier present. But we must be discerning in our efforts, building on the progress we have made while addressing the challenges we still face.

Dr. Sandro Galea is the author of "The Contagion Next Time", released in 2021 from Oxford University Press. A native of Malta, he has served as a field physician for Doctors
Without Borders and held academic positions at Columbia University, University of Michigan, and the New York Academy of Medicine. Currently, Dr. Galea is the Dean and Robert A. Knox Professor at the Boston University School of Public Health.