Murphy likely to hold his seat, but Democrats' struggle to connect with their base is visible across the state 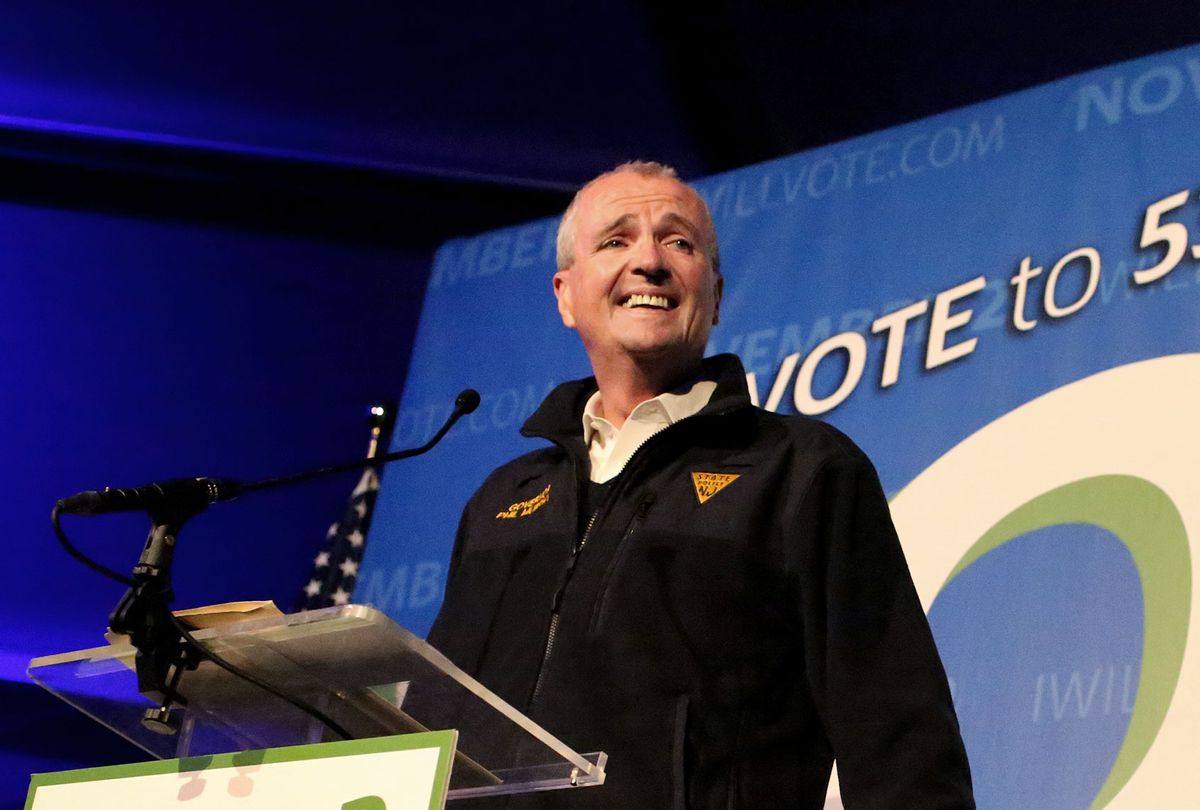 With just hours to go before the polls close in New Jersey, Gov. Phil Murphy appears likely to break the one-term ceiling that's haunted his Democratic predecessors since the early 1980s. All polls suggest Murphy will easily defeat his Republican opponent, former state Assemblyman Jack Ciattarelli. That might be great news for Democrats in the Garden State, but it must be tempered by the latest NBC polling that President Biden's presidency is underwater, with a majority of Americans now disapproving of his job performance.

"What's more, the survey finds that 7 in 10 adults, including almost half of Democrats, believe the nation is headed in the wrong direction, as well as nearly 60 percent who view Biden's stewardship of the economy negatively just nine months into his presidency," NBC reported.

In the midst of a pandemic and a global climate crisis we can't afford to be myopic about what matters politically. What good is it for Murphy to win re-election, if his national party is in a nosedive and on the way down loses control of Congress?

Much of the COVID recovery that Murphy was able to run on, after our state registered the highest per-capita COVID death rate on earth, was due to the multi-billion-dollar infusion from Washington initiated by the Biden White House and passed by a Democratic Congress.

The erosion of Biden's support among even his own party can be easily traced back to the obstructionism of Sens. Joe Manchin, D-W.Va., and Kyrsten Sinema, D-Ariz., who kneecapped the president's Build Back Better agenda before its specifics could even be presented to the American people.

Biden's potentially transformative $3.7 trillion agenda was the victim of a Beltway shiv job within the Democratic Party. While media coverage fixated on personalities and dollar amounts, few Americans really knew what exactly the Build Back Better agenda was all about, even as Big Pharma, Wall Street and energy sector lobbyists worked to derail it

Now, the details being widely reported includes the long list of what Democrats have had to cut out: paid family leave, medical leave, free community college, dental and vision coverage under Medicare and a plan to lower prescription drug prices — all to satisfy two party "moderates" who might (or might not) support a greatly reduced $1.7 trillion package.

To say the professional Democrats blew the messaging on this doesn't fully describe the political malpractice on display. Now the storyline is about what Democrats did not deliver. No wonder the tide of popular support for Biden is ebbing.

"Democrats have to speak to people's everyday needs," said Larry Hamm, long time Newark community organizer and former U.S. Senate candidate. "When you hear the conversation about reconciliation and Build Back Better you hear numbers, not the programs like child care or the expanded child tax credit."

Hamm, chair of the People's Organization for Progress, said he sees the line between progressives and so-called moderates as being between "the people who want the working class to have more" and "those who want them to get less — that would be your moderates."

On Oct. 27, thousands of poor and low-income Americans, along with their advocates, came from across the country to Washington as part of a national organizing effort led by the Rev. Dr. William Barber and the Poor People's Campaign to press Congress not to shrink Biden's initial Build Back Better agenda.

"All the focus is only on the numbers — so many trillions," said Imam Saffet Abid Catovic, the Muslim chaplain at Drew University in Madison, New Jersey, who made the trip in support of the Poor People's Campaign. "The focus is not on the people, like the essential workers who now are disposable. It's a sad commentary on the way our democracy is functioning to have the entire process held up by two senators. I thought it was 'We the people,' but we are being held hostage by these two senators."

For Murphy and New Jersey, much remains to be done — as the pre-pandemic lead pipe crisis in Newark revealed. The loss of momentum in Washington will have real consequences here in New Jersey. Generations of neglect of our basic infrastructure has taken a toll beyond the means of any single state's treasury to repair.

The massive death toll from the pandemic, and the disparate impact on people of color — who were often on the front lines as essential workers — has exposed major gaps in our health care and public health systems.

Consider just how many of the dozens of the residents in our region who drowned in flood waters from Tropical Storm Ida died in illegal basement apartments. When you are leading a state like New Jersey — where, according to the United Health Foundation, more than one in five families live with "severe housing problems" — you need a willing partner in Washington if you hope to address our chronic housing crisis while at the same time hardening our neighborhoods to the ravages of climate change.

According to the United Health Foundation's Health Rankings, 21% of New Jersey housing units have one or more of the following issues: they lack a complete kitchen, lack necessary plumbing or are overcrowded and/or present a "severe" cost burden for the families who live in them. Nationally, only 17.5% of residential housing stock is similarly challenged.

Build Back Better has to be more than a slogan — it needs to be an imperative.

As evidenced by a recent visit by Sen. Bernie Sanders to Rutgers University's New Brunswick campus to campaign for Murphy, our governor has successfully aligned himself with the progressive wing of his party.

In a glowing profile in the Nation, columnist John Nichols posited that Murphy might be the "most progressive" governor in the U.S., observing that "many who were once skeptical of the former investment banker now admit that ... Murphy's policies were compassionate and forward thinking."

On Murphy's campaign website he flags "affordable housing" as an issue, but frames it in terms of "strengthening New Jersey's position as the best place in America to raise a family," with no reference to the sorry state of so much of the state's existing housing stock, where people are paying far too much for far too little.

"When COVID-19 made it difficult for thousands of residents to pay their rent or their mortgage, Phil acted decisively, signing a sweeping executive order preventing the removal of individuals from their homes through eviction or foreclosure proceedings," proclaims the Murphy website.

What this narrative misses is that before the pandemic, according to the United Way's annual ALICE (Asset Limited Income Constrained Employed) survey, close to 40% of New Jersey households were struggling to make ends meet and keep current on their rent or mortgage. In some of the state's poorer communities, a majority of the households were in that kind of month-to-month crucible.

For years now, long before COVID, New Jersey has been one of the states with the highest foreclosure rates. More than a decade after the Great Recession, thousands of zombie homes continue to drag down local property values and pose a clear and present danger to neighborhoods in places like Camden and Newark.

In 2018, NJ Advance Media reported that according to the U.S. Census, New Jersey had 391,428 vacant housing units, with the highest concentration in Newark, the state's largest city.

"They're empty, they're often in disrepair and they're a drag on your wallet," wrote reporter Disha Raychadhuri. "Vacant properties can be detrimental to economic growth in an area, adding blight, deterring investment and dragging down the overall feel of a neighborhood. Not to mention, they can be a real thorn in the side of your home value."

For Fredrica Bey, a Newark-based community activist, Murphy's administration has failed to meaningfully address the state's prolonged foreclosure crisis, which long predated the pandemic. She says she won't be voting for him, but she will be voting.

"The governor, who comes from Wall Street, has not held banks like Wells Fargo accountable for how they have undermined Black home ownership and decimated our historical Black wealth for our children and families in our neighborhoods," she said. "I will write in the name of our beloved Maya Angelou, who told us, 'When people show you who they are, believe them the first time.' Or I will write in the name of our beloved,Fannie Lou Hamer, 'We are Sick and Tired, of being Sick and Tired!'

"As for me and my house," Bey continued, "we will be voting for people in Trenton who continue to show respect for our lives and property, like our Assembly member Cleopatra Tucker, who has been in the struggle with us and understands what we need from our elected leaders when it comes to standing up against the big banks and Wall Street."