The make-ahead Thanksgiving stuffing you can cook right now 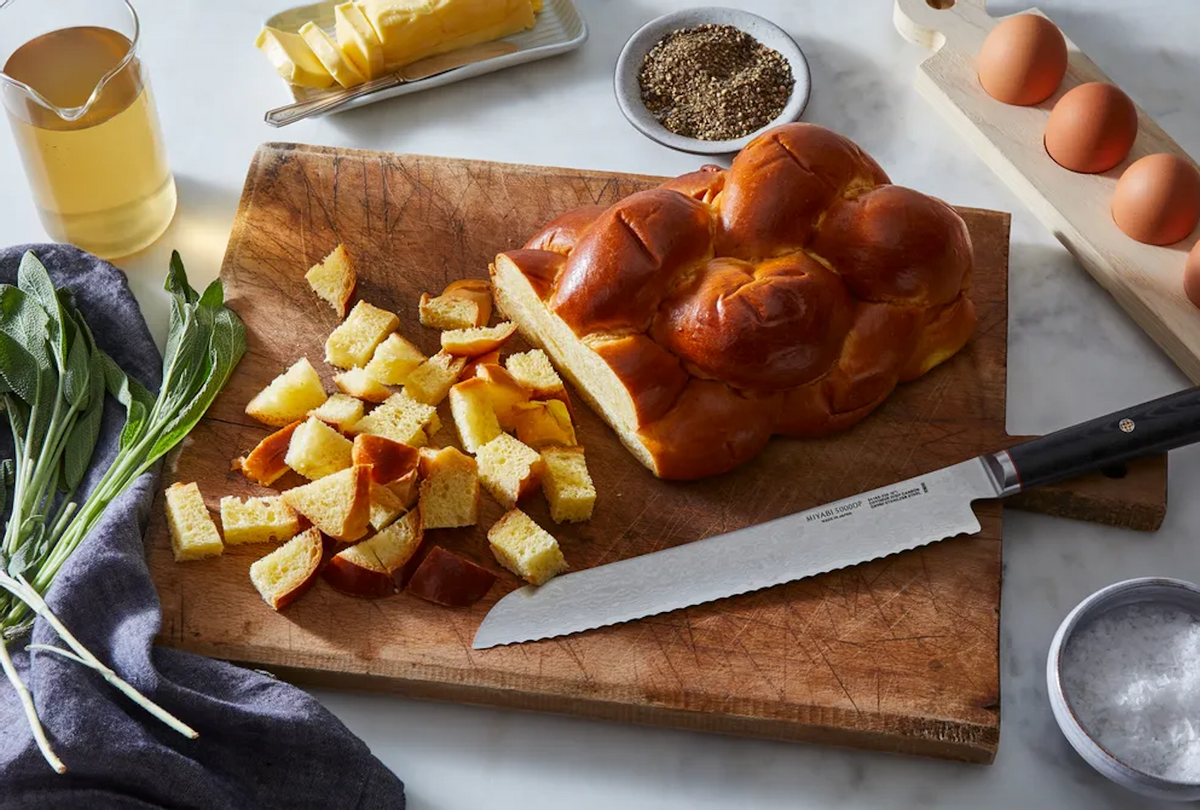 With November almost here (but how?), I imagine many soon-to-be Thanksgiving hosts across the country are digging out their recipe files, drafting their menus, making monstrous grocery lists, and crafting their game-day plans. One of the most pressing questions is "what can I make ahead for Thanksgiving?" Sure, you can shop for non-perishable pantry goods like dried or fresh herbs, chicken broth, cornmeal, nuts, dry baking goods, and more. But what can you actually cook anything in advance of Turkey Day? What about make-ahead stuffing?

If any of these hosts are like me, many of the same questions are arising:  To brine the turkey or not?(Test Kitchen Director Josh Cohen did a compare-and-contrast experiment to answer this for himself.) How to cook it this year? (Food52 Senior Editor Eric Kim's go-to method is simple as can be.) Low and slow? Fast and furious? Stuffed? Deep Fried? Spatchcocked? In pieces? And what about the gravy?

The how-to-cook-the-bird answer, for me, may change every year. Where I have found resolve, however, is in stuffing. The recipe I love, which I included in my cookbook, Bread Toast Crumbs, yields a stuffing with a crisp golden exterior and a creamy center, flavorful enough to eat on its own, but welcoming to many a relish, sauce, gravy, or anything else the Thanksgiving plate has to offer.

How to prepare make-ahead stuffing

1. Buy (or bake) a couple loaves of country-style white bread and remove the crust.

Most loaves in grocery stores or high-end bakeries will have thick, extra-crusty crusts, which, in my opinion, are too tough for stuffing (remember, the bread is getting baked again). If you bake white bread with a softer crust, like this Genius-approved No-Knead Peasant Bread, challah, or brioche, there is no need to remove the crust. For stuffing, I prefer neutral-flavored white bread — as opposed to sourdough, whole-wheat, or cornbread — but, of course, use what you like! Make sure to let the bread get a little stale by leaving it out at room temperature uncovered; dried bread will absorb all of the stock as it rests without getting soggy.

2. Tear the bread into irregular chunks or dice into cubes, toss with a generous amount of olive oil, and toast until golden.

From a somewhat fussy but incredibly delicious Suzanne Goin recipe published in Bon Appétitseveral years ago, I learned that saturating the bread pieces with lots of oil (you could also use melted butter, bacon fat, or schmaltz) before toasting them, makes for an especially tasty and beautifully golden stuffing. And from a wise Italian nonna, Antonietta Fazone, I learned that toasting bread, versus staling it on the counter overnight, it is preferable for preserving its flavor. While visiting Antonietta one day, she ran a slice of bread she had dried out in the oven under a streaming faucet, then broke off a piece for me to taste. Next, she ran a slice of stale bread under the faucet, then handed me that piece to compare. But there was no comparison — the one she had oven-dried was the unmistakable winner. Toasting had preserved the flavor, while staling had not.

3. Prepare seasonings and add-ins according to your preferences.

Thanksgiving stuffing can be viewed as a blank canvas (this brown-butter version from Emma Laperruque's Big Little Recipes column is as minimalist as it gets). You could dress it up with spicy sausage or briny oysters, or keep it bare bones with sautéed onion, celery, and maybe a dash of Bell's Seasoning. Some of my favorite festive additions include: dried fruit (like raisins, cranberries, dates, and prunes), roasted nuts (from chestnuts and hazelnuts to walnuts and pecans), crisped pancetta or bacon (or salami or pepperoni!), sautéed apples or pears, and shredded Brussels sprouts (a mandoline works well for this). But don't stop there. Stuffing is amenable to countless seasonings, fruits, vegetables, nuts, and meats — that's what makes it your own. In the make-ahead Thanksgiving stuffing recipe below, I've kept it somewhat simple with not-quite caramelized onions and ruffly kale.

4. Toss bread and add-ins with stock, salt, and pepper.

If you are making a vegetarian stuffing for Thanksgiving, obviously use vegetable stock (a mushroom stock would be especially cozy). There are even no-chicken chicken stocks that you can purchase for even savory, meaty flavor. Otherwise, turkey or chicken broth (in a pinch, you can turn to Better Than Bouillon) will not only keep the stuffing moist but also impart it with a rich, meaty flavor. Since you're making the stuffing in advance, you could always make stock ahead of time too! If you're reading this on October 8th, you have more than six weeks to prepare for Thanksgiving!

Once the stuffing is tossed with stock and seasonings, taste it. This is when it's important to get the seasoning right (kosher salt and freshly ground pepper do the trick, but don't be shy about adding crunchy bonuses like fennel seeds, caraway seeds, or even everything seasoning). The mixture should taste well seasoned, almost like a panzanella salad — it should taste so good, in fact, you wouldn't mind stopping right then and there, calling the dish done. But keep going.

5. Whisk one egg with a little more stock, then toss one last time.

The addition of an egg helps bind the stuffing, giving it a set, fluffy, custardy texture. (Just be careful when adding hot stock to the egg, which may be cold from the fridge. If you add too much at once, you could inadvertently scramble and cook the egg.) This is not essential, but if you like a stuffing that really sticks together, add the egg. If you don't mind having a looser-textured stuffing or prefer to make a vegan stuffing, omit the egg altogether.

6. Transfer stuffing to buttered baking dish, cover with foil, and freeze until Thanksgiving (or for up to 3 months). Whenever you're ready, transfer to the oven to bake.

The hardest part is over and hooray . . . it's Turkey Day! Now that you have fully prepared the stuffing in advance for Thanksgiving and in the meantime, made a few pies, brined a turkey, and trimmed green beans, it's time to cook the stuffing. You can immediately transfer it to a buttered baking dish or a cast-iron skillet. Melt butter in a large skillet over medium-high heat and then add the stuffing mixture from a large bowl. Cover with foil and bake whenever you're ready!

To cook frozen stuffing: Bake the stuffing in a casserole dish, baking dish, or large skillet directly from the freezer covered for one hour in a preheated oven at 350º F. Uncover, increase the temperature to 400º F, and bake for 15 to 20 minutes more, until hot throughout and golden-brown and crispy on top. Alternatively, if space permits, thaw in the fridge overnight, bake, and cover with foil for 30 minutes at 400º F, then uncovered for 15 to 20 minutes more. And if you want to eat it right now, the process is the same as thawed: Bake first for 30 minutes covered at 400º F, then for 15 to 20 minutes more uncovered, or until the top layer of bread is browned and crisp. This make-ahead stuffing is the ultimate side dish — no special occasion required.