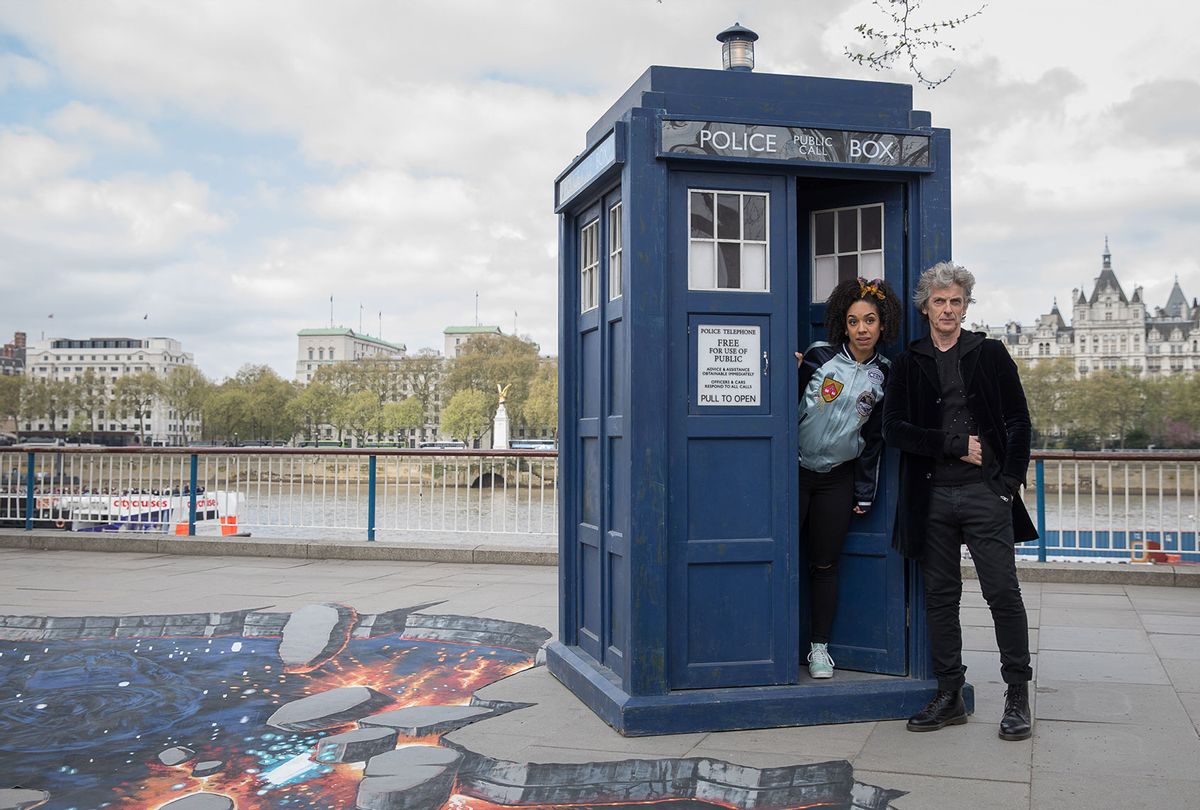 "Doctor Who" stars Peter Capaldi as The Doctor and Pearl Mackie as his companion Bill in character with the TARDIS and a huge 3D pavement painting on London's South Bank in 2017 (Tim P. Whitby/Tim P. Whitby/Getty Images)
--

The search for the next Doctor is on. After Jodie Whittaker's run as the Thirteenth Doctor on "Doctor Who" season 13, plus a few specials after that, it will be time for a new Doctor to step up. And people have a lot of thoughts about who it should be.

One of those people is Pearl Mackie, who played companion Bill Potts alongside the Twelfth Doctor, Peter Capaldi. Bill made history by being the series' first openly gay companion. (That's bar Captain Jack Harkness, who was never officially a companion.)

Now, Mackie (who recently came out as bisexual last year) has revealed that she'd love to see a take on the Doctor not adhering to any gender roles. As she told The Telegraph:

I would like to see both a female and a non-white doctor… That's the thing about Doctor Who, isn't it? There's so much room for change. The Doctor's regenerations allow the show to move with the times. In fact, I think it would be great to have someone nonbinary playing the part. The Doctor doesn't really identify with human constraints at all. So I feel that could be a logical next step, wouldn't it?

Choosing the next Doctor on "Doctor Who"

It's been brought up many times in recent conversations that it's time to give the Doctor a new look. "Doctor Who" has already challenged the status quo by making the Doctor a woman by casting Jodie Whittaker. And in the previous season, they even revealed a hidden life where the Doctor was a Black woman (played by actress Jo Martin).

And so, quite frankly, the Doctor can be just about anyone they want to be. As Mackie mentioned, at this point, the Doctor isn't really constrained by gender. And considering the Doctor is actually an alien hailing from the planet Gallifrey, that makes it quite hard to slap a human gender label on a character that doesn't really need one in the first place.

All that being said, there's still a fine line to walk here. Some people are comfortable doing away with gender labels and other constructs, while others feel there's something of value to the representation of their gender and sexual identity onscreen. So at the end of the day, we know not everyone can be pleased all at once. But if the Doctor continues to have a long future, we may just see a diverse legacy being built in front of our very eyes.