Despite military, commercial, and scientific incentives to clean up space junk, there are no clear solutions 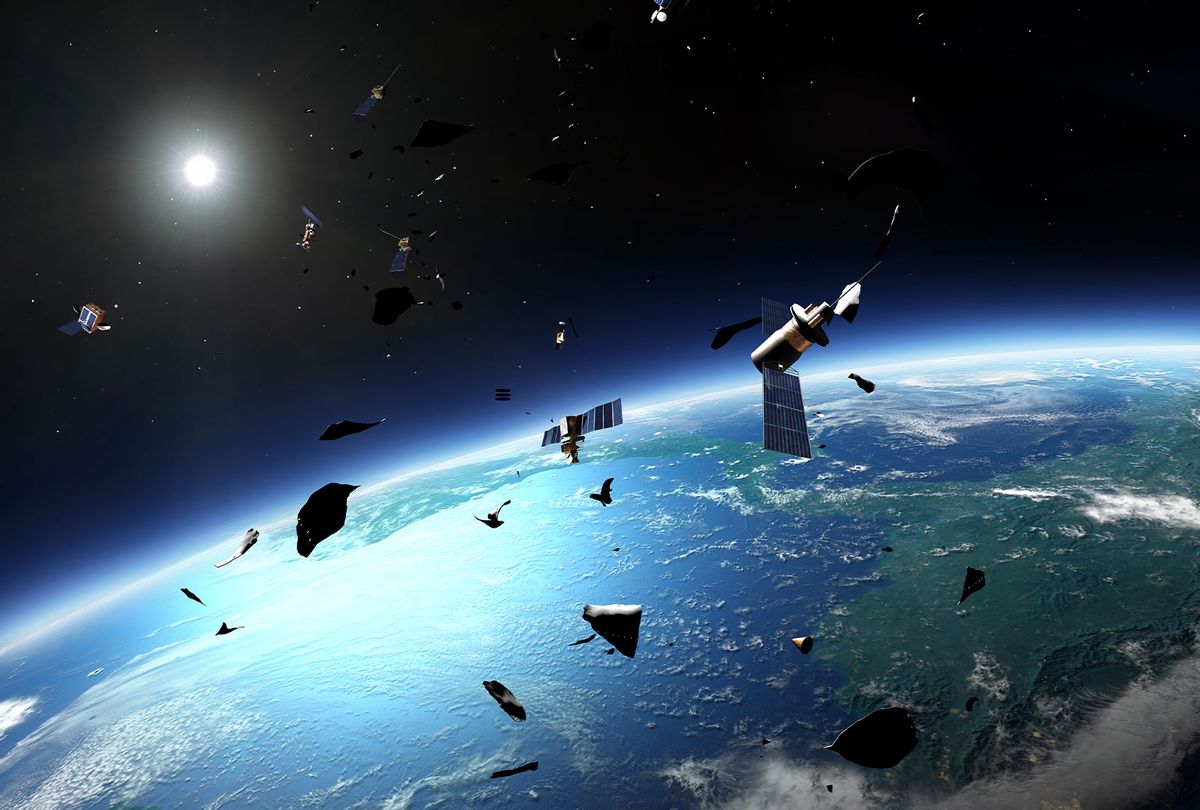 Outer space is incomprehensibly vast and empty. Yet over the past century, humans have managed to clutter a region known as low Earth orbit (LEO), which stretches from 125 to 1,200 miles above the surface of the planet, with "space debris." This broad category of man-made objects includes "dead" satellites, jettisoned rocket boosters, shrapnel from collisions, lost equipment such as cameras and spatulas, and chunks of frozen urine.

Space agencies track approximately 29,590 of these objects, and estimate that their combined mass exceeds 9,600 metric tons. The smallest observable objects are about the size of a softball, no wider than 10 centimeters across. The largest approach the size of a Greyhound bus.

Space junk rips around LEO at speeds exceeding 17,500 miles per hour — the minimum velocity required to resist falling back into Earth's gravity well. At that ferocious speed, a fleck of paint has the potential to take out a satellite. Space debris has punctured a robotic arm on the International Space Station, forced astronauts to hide in escape capsules, and has smashed into active satellites, producing clouds of high-velocity shrapnel that will spend decades in orbit.

While the amount of debris in LEO — and the region above it, known as geosynchronous orbit (GEO) — increases with each passing year, so does the interest of governments and private companies to use outer space for military and commercial activities. Cleaning up this region suddenly feels urgent, but despite the incentives, a host of technical, financial, and political challenges have prevented much progress.

"What is it going to take to take this seriously?" said John L. Crassidis, a professor of Mechanical and Aerospace Engineering at the University of Buffalo, who works with NASA and the U.S. Air Force on the issue of space junk. "Unfortunately, like everything, it's going to take a human disaster, right?"

Kessler Syndrome and the problem of tracking debris

Space junk is hard to track. The vast majority of objects are too small to monitor, and the larger pieces are difficult to distinguish from one another. The bulk of this work is done by the U.S. Department of Defense (DoD), which monitors around 27,000 discrete pieces of debris. It voluntarily shares its findings with most satellite operators, who use the information to decide whether to initiate an avoidance maneuver, otherwise known as "dodging" debris, if a piece swings too close.

But the DoD's motivations are not purely altruistic. Collisions have the potential to scatter more debris across LEO or GEO, which would not only increase the number of objects the organization has to track, but also bring a hypothetical situation known as Kessler's Syndrome closer to fruition.

The Kessler's Syndrome scenario was proposed in 1978 by Donald J. Kessler, a scientist working for NASA. He imagined a future where LEO was so densely packed with satellites and debris that a collision event would initiate a chain reaction: debris would collide with other orbiting objects, creating more debris that would then soar away and smack into other objects, and so on, eventually rendering the region overcrowded with junk and unusable for military, commercial, or scientific purposes.

For decades, Kessler's syndrome was largely written off as a scary but unlikely scenario. Most satellite operators subscribed to Big Sky Theory — the idea that, because outer space is so massive, the chance of a collision is incredibly unlikely. Even today, that is still largely true. The annual probability of a collision event sits around 0.8% in LEO. But with every new satellite shot into orbit — around 1,400 have gone up this year alone — the probability increases.

"It's just like gambling," said Crassidis. "Eventually, somebody's going to win the lotto."

In 2009, two communication satellites —  Iridium 33, a commercial satellite, and Kosmos-2251, a "dead" communications satellite — unexpectedly collided. The impact scattered 2,500 pieces of trackable space debris across LEO, along with a storm of smaller pieces too tiny to monitor. The event rattled scientists and satellite operators. On the day of the collision, a handful of other satellites were flagged as more likely to collide.

The Iridium-Kosmos incident came two years after the Chinese government blew up a defunct weather satellite drifting through LEO, in a test of their anti-satellite capabilities. The explosion produced over 3,000 pieces of trackable space junk — by far the single largest debris-producing event in history.

Taken together, these two events have catalyzed a shift in thinking among satellite operators, who are now more likely to initiate a dodging maneuver — even if the chance of collision remains small. They also intensified conversations about the shared responsibility of governments and private parties to keep LEO and GEO free of junk. But, despite a widely acknowledged need for change, few treaties have been signed and little progress has been made.

"It is not a simple problem," said Hanspeter Schaub, a professor of Aerospace Engineering at the University of Colorado at Boulder. "And it's not just a technological problem — there's an economic aspect, a political aspect, a social aspect. It's a complex field."

The Inter-Agency Space Debris Coordination Committee (IADC) is an inter-governmental body, founded in 1993, to address the problem of space debris. There are currently 13 members, including United States' NASA, Russia's Rococosmos, and the China National Space Administration (CNSA). The committee recommends a handful of protocols for decommissioning satellites at the end of their use period, including "...venting leftover fuel or other pressured material that could lead to explosions," and lowering "dead" satellites into the atmosphere, where drag causes them to disintegrate within 25 years.

But because these protocols are merely recommendations, not laws, many operators choose to leave satellites in orbit once their mission has been completed. Schaub and his colleagues, in a 2015 paper, explained the financial motivations behind this: "Orbital debris has built up over the years because it is less costly to abandon the spacecraft than choosing 'mitigation' or… disposal."

In the paper, the authors detail the many costs involved with owning and operating a satellite. Things add up quickly. There is the expense of building the device, filling it with fuel, launching it into orbit, possibly insuring it — something most operators forgo — all before it reaches LEO or GEO, which is when standard operational costs kick in. To avoid losing the satellite to undetectable space debris, many are equipped with shields that can deflect or mitigate impact. But the ideal scenario, of course, is to avoid being hit at all.

While facing large-scale incoming debris objects, capable satellites may perform a "dodge" maneuver. This sounds like an obvious course of action, but dodging is expensive, too. These maneuvers burn precious fuel, and also lead to "satellite down-time," which is when the satellite is temporarily dysfunctional outside of its standard orbit.

These expenses have led to two habits among operators, both of which contribute to space debris. The first is that, when a satellite reaches the end of its use period, it's common to simply "abandon the spacecraft" instead of spending extra money to propel it into a "graveyard orbit," meaning an orbital path away from other satellites. The second is that, given the low probability of a collision — and even after warnings have been issued — the abiding practice is to do nothing, sit tight, and hope that the large object will simply sail by. There's a lot riding on that gamble.

"Years of successful mitigation can be negated by one collision," said Schaub.

Schaub also pointed to another hurdle in the effort to clean LEO and GEO: the fact that each piece of "debris" is not simply trash, but the property of a private entity or government. This further confounds any clean-up effort.

"Yes, it was trash. Yes, it was going to take out people in the space station, but as soon as you grab it, they're like, 'hey, that's theft,'" he said. "As soon as you touch it, there's all kinds of legal liabilities that are going to come into play… this has to all be worked out, and it's actually quite complicated."

And because cleaning space junk from LEO and GEO would be a monstrously expensive endeavor, individual governments are de-incentivized from tackling the problem unless agreements are reached between all space-faring countries.

"If we deal with this problem and we don't get China and Russia on board, what's the point? We're wasting our money, right?" said Crassidis. "If we don't sign some international treaties… the best hope is following the [IADC] guidelines, and that's not happening with every country."

Despite the significant political and financial hurdles involved with cleaning up space junk, a burgeoning field of startups and research programs are directed at solving the problem.

In his lab at the University of Colorado at Boulder, Schaub has been working on an "electron gun" — akin to the sci-fi concept of a tractor beam — that would shoot electrons at a target, allowing the operator to slow the object down or redirect it towards a graveyard orbit.

"By spitting out electrons, you can make yourself positively charged, which creates an attractive force," he said. "We call that the electrostatic tractor. You would gently be able to pull something into a new orbit," though it would take "several weeks," Schaub added.

Another proposed solution involves "tethering," which has been pursued by the Japan Aerospace Exploration Agency (JAEA). The idea essentially involves lasso-ing space junk by shooting a 2,300 foot long electrodynamic tether at the object from a spacecraft, and dragging it down into the atmosphere.

But there are significant technical hurdles to this solution, explained Schaub.

"Once you tether to a debris object, and then try to thrust, you've got a complicated two-body system," he said. "It's like towing a boat on a river."

Despite the difficulties, some researchers are pushing ahead with tethering. RemoveDEBRIS, a research platform designed by the Surrey Space Centre, was sent into space in April 2018. Its capabilities include a "dragsail," allowing the platform to drop into the planet's atmosphere, and a harpoon and a net, designed to pierce and trap mock debris targets in LEO.

Private companies are also testing solutions, including D-Orbit, based in Italy. The company is developing add-on thrusters that can be equipped to a satellite, which, once defunct, could propel it into a graveyard orbit above GEO or pull it down into the atmosphere to burn up. ELSA-d, a Japanese spacecraft, is designed to attach to satellites equipped with compatible docking plates, and push them back down towards Earth.

Yet even if these solutions prove effective (Crassidis says he doesn't "see anything practical in the next ten to twenty years"), without legal penalties for leaving junk in orbit, there remains a key problem.

"What is the economic model to actually pay for this?" said Schaub. "Nobody wants to pay to move trash."

CORRECTION: An earlier version of this story misspelled Hanspeter Schaub's surname. The story has been updated.