How much turkey per person: the Thanksgiving dilemma

From mashed potatoes to pie, here’s how much food to cook based on your guest list 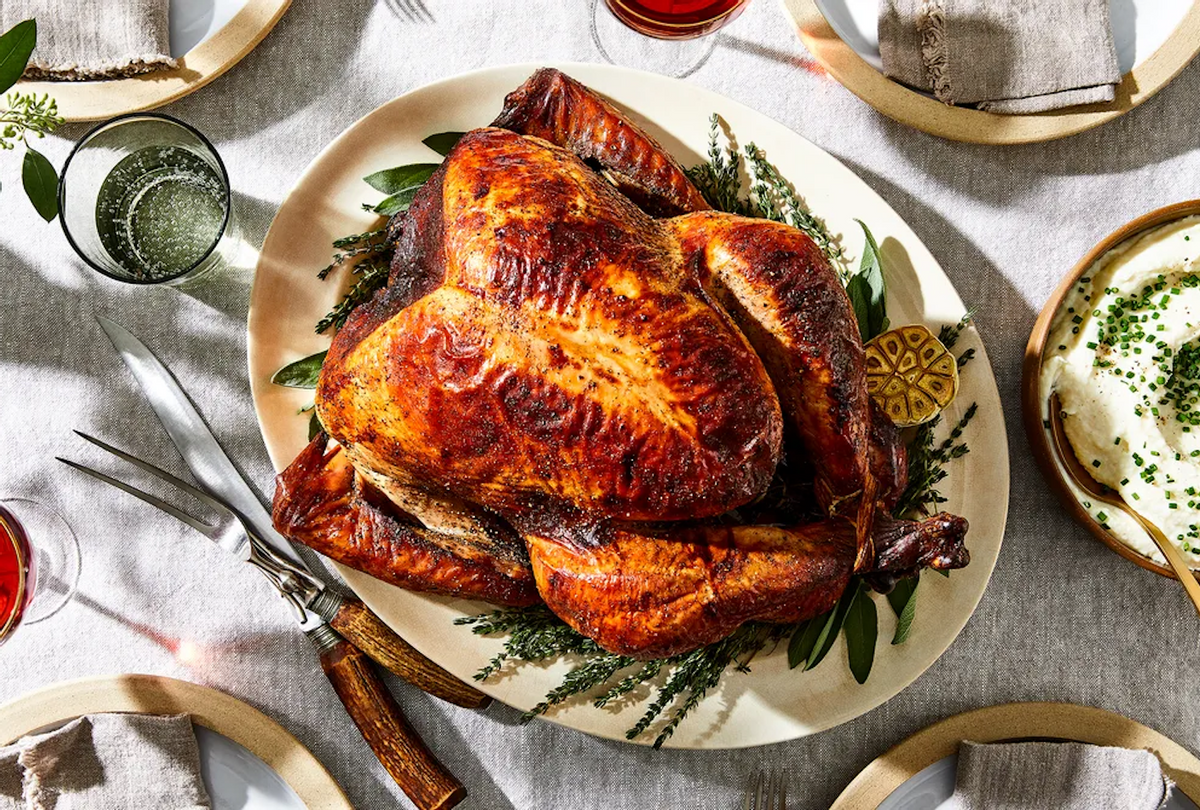 It's inevitable. Every Thanksgiving you question how you're supposed to choose the size of your bird. Was it one pound per person? Or two? And what about the mashed potatoes? There has to be a better method than just dumping bagfuls in a pot and hoping there's enough to go around. The pounds-per-person questions get asked on the Food52 Hotline every year, so it's time to draw your line on the scale. As a general guide, take note of how much food you have left over (or what you needed more of) so that you can make the proper amount of turkey, potatoes, and pie for Thanksgiving dinner next year

So how much Thanksgiving turkey should you cook based on the number of guests that you'll be serving? Food52 user Nutcakes' general rule is one pound of turkey per person, but argues that larger birds tend to yield more meat, so you could plan for three-fourths pound per person. Another user, Darksideofthespoon, goes for one pound per person too, but then adds a few extra pounds to ensure there's enough turkey for leftovers sandwiches, soups, or pot pies to make on Black friday. Vittoria is more conservative and figures on a half pound per person, but also adds more for the sake of leftovers.

Steven Raichlen plans on a pound and a half of turkey per person: "This will make you feel properly overfed (as you should at Thanksgiving) and leave you with welcome leftover turkey. For me, a 12- to 14-pound turkey is ideal. For large gatherings, I'd rather cook two 12-pounders than one 24-pound monster. (It's easier to control the cooking.)"

Virginia Willis shares all of the numbers you need to know: "In terms of turkey, it's best to think about 1 1/2 pounds or 24 ounces per person of on-the-bone turkey. About half of that weight will be bone, so that takes it from 24 ounces to 12 ounces, and you will lose about a quarter of that when cooking, so that results in approximately 9 ounces of cooked turkey per person—plenty for dinner and some extra leftover turkey for sandwiches the next day.

You know your guests better than me so consider if you are hosting a crowd of meat eaters or more herbivores. This will help you have a good guess-timate as to which size turkey to purchase.

If you're making simple mashed potatoes for Thanksgiving and other holiday dinners, Food52 user boulangere usually counts one and a half potatoes per person: "Everyone gets as much as they want, and you have those heavenly leftovers. At a more sane time, I go with one per person." Keep in mind that the type of potato can determine how many you need. For example, you'll certainly need more than one or two roasted fingerling potatoes per person. According to Reiney, "It really depends on how large the potatoes are, and how much mash you want to serve—if you're talking the large russets, half to one each would probably be fine, with no leftovers. I usually err on the side of too much because they do seem to go quickly." And who would ever say no to leftover mashed potatoes?

In regards to potatoes, my general rule of thumb is one and a half medium Yukon gold potatoes per person, or since I am a big sweet potato fan, I estimate one sweet potato per person.

Food52 co-founder Amanda Hesser uses one-third pound potatoes per person. (Want to know her proportions for perfect mashed potatoes? To serve six people, she cooks two pounds of potatoes then mashes in one cup of milk, four tablespoons of butter, 1/3 cup of heavy cream, and one and a half teaspoons of salt.

"In terms of gravy, I am a firm believer in there is no such thing as too much gravy," writes Virginia Willis. However, experts say that ⅓ to ½ cup of gravy per guest is a good place to start. Our favorite Make-Ahead Gravy makes one quart of gravy, which would serve eight to twelve guests. You can always cut the recipe in half for a smaller crowd or double it in size so there is ample gravy for everyone's turkey and plenty leftover for round two.

Frankly, there is no such thing as too much pie. If you have a hankering to make apple pie, pecan pie, pumpkin pie, chocolate cream pie, and sweet potato pie, then by all means bake away (even if you're hosting a small crowd). On average, one nine-inch pie (which is the standard size) will serve six. Sure you can cut smaller slices to feed more people, or give guests the chance to mix and match a few different types of pie, but six slices per pie is a safe estimate. If you're hosting 12 loved ones for Thanksgiving, we'd recommend serving two to three pies, depending on whether or not you'll be serving additional desserts or if you want to have leftovers.