Why do we eat turkey on Thanksgiving?

The history of America's most popular holiday bird 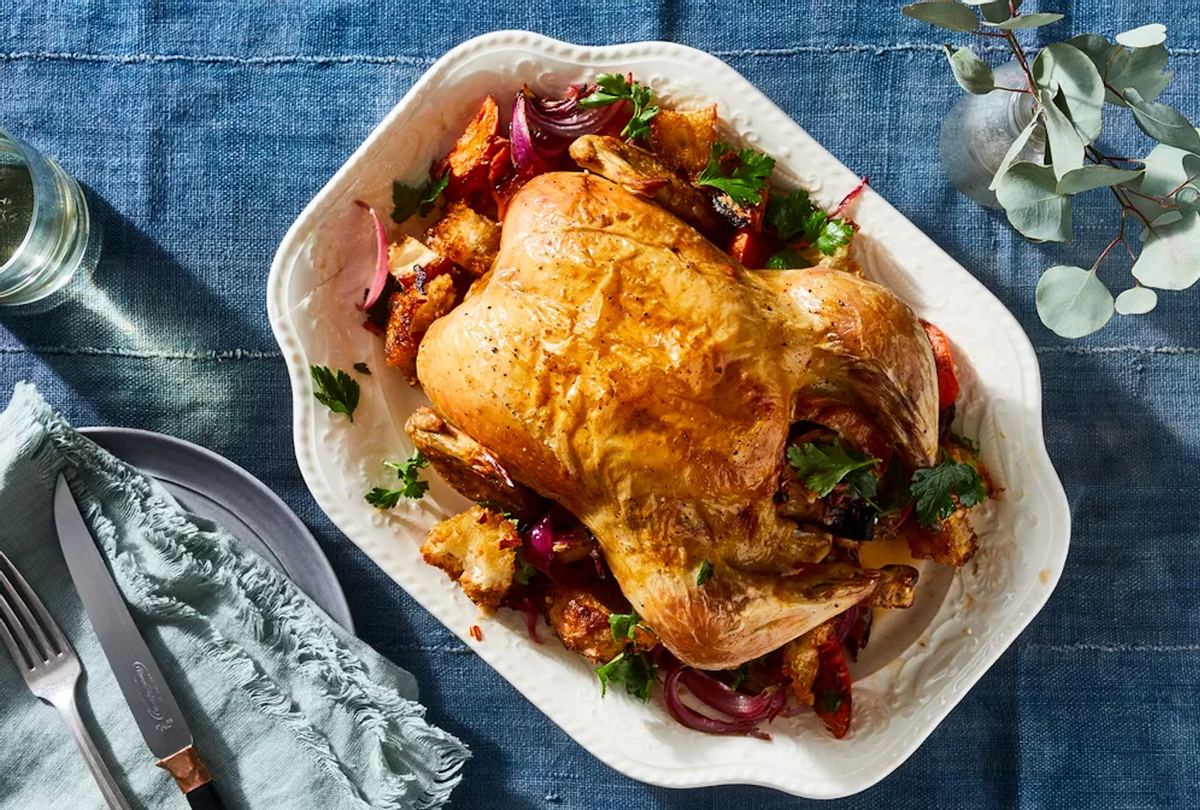 Growing up in upstate New York, I used to wonder why we eat turkey on Thanksgiving.Throughout the year, we'd see all types of animals daily: squirrels and chipmunks scurrying; deer innocently dropping their heads into my mother's shrubs for a nibble; even the occasional bear, clumsily sifting through our garbage in search of a late-night snack.

But turkeys, it seemed, mostly made their cameos on the cusp of fall (the worst possible time considering their signature party trick). Driving down windy roads, we'd see a cluster of the wild variety dart across the street—a hen leading a pack of small turkey chicks, aka "poults," or the occasional male turkey, otherwise known as a "tom" or a "gobbler," bright red waddle and fanned out tail feathers wiggling furiously as he ran to safety.

Don't you know what's going to happen to you? I'd think to myself. Soon enough, you're going to become the Thanksgiving meal. Soon enough, my family members will be eating turkey for Thanksgiving dinner alongside pumpkin pie, green bean casserole, and mashed potatoes.

The History Of Thanksgiving

Thanksgiving occurs in the middle of the fall school semester, and in order to understand its history, we need to go back to American History class. For starters, we don't eat turkey on Thanksgiving nowadays because the pilgrims at Plymouth Rock ate turkey on Thanksgiving. In 1789, President George Washington issued a proclamation for "a day of public thanksgiving and prayer." Nearly a century later in 1863, during the midst of the Civil War, President Abraham Lincoln encouraged Americans to recognize the last Thursday of November as "a day of Thanksgiving." Seven years later, Congress passed legislation declaring Thanksgiving a national holiday. And even then, the date was still up for debate. It wasn't until 1941 that Thanksgiving would officially fall on the fourth Thursday in November of each year, per a resolution signed by President Roosevelt in the United States.

So, Why Do We Eat Turkey On Thanksgiving?

Well, you have Alexander Hamilton to thank for that. After George Washington encouraged Americans to celebrate the holiday, it is believed that Hamilton said, "No person should abstain from having turkey on Thanksgiving Day." So there you have it. That is the origin of the main course, the one that leads to debates over white vs. dark meat, deep-fried vs. roasted turkey, and who will acquire the wistful wishbone.

Thanks to a first-hand account of the pilgrims' harvest feast, written by colonist Edward Winslow in Mourt's Relation: A Journal of the Pilgrims at Plymouth, we know a little bit about what they considered Thanksgiving food at the time. His recollection of the first Thanksgiving included no explicit mention of turkey, but did mention "wild fowl," which could have referred to a number of different types of game. Turkey was not particularly prevalent in New England in 1621, so it's unlikely that it was served, according to The Old Farmer's Almanac.

According to the National Turkey Federation (an organization made up of humans, not turkeys), 88 percent of Americans eat turkey in one form or another on Thanksgiving. And the very reason that we eat them on this holiday is that they were abundant in the northeast during the first Thanksgiving celebrations years ago. Jonathan Gunther—environmental lawyer, avid outdoorsman, and this writer's cousin—notes that turkeys become more active twice per year: in spring during mating season and again at the tailend of summer.

"They become more visible in late August possibly because they've finally grown to a certain size and are more mobile," he tells me. "Also, they prepare for winter by loading up on grasshoppers and other bugs found in more open areas."

So springtime they're on the prowl and feeling frisky, but by end-of-summer, they've all but resigned to acquiring some extra winter pudge.

My Own Thanksgiving Feast

Per tradition, most of us feel obliged to cook turkey on Thanksgiving. We might incorporate our own spin—deep-fried, brined, or preceded by a large serving of lasagna, like my Aunt Vicky—but turkey, in one form or another, remains the pièce de résistance on most Thanksgiving tables. Our home was no different.

Early in the morning, after coffee but still in pyjamas, my mom would start preparing the turkey. While giant cartoon characters floated down Fifth Avenue and packs of grown men chased each other around on football fields, the roasting aroma would drift throughout the house, luring us to the kitchen for a quick peek through the glass oven door. Using some of the drippings, my mom would start making the stuffing; closer to dinner, my dad, and later in life, my brother, would begin working the gravy.

At the table, my late grandfather would claim the "Pope's nose" (though no one else ever wanted it anyway), aka the part of the turkey that supports the tail feathers, and make a spectacle of eating it. After dinner, two lucky hands would grab a side of the wishbone and pull in opposite directions. Following some television and a tryptophan-induced food coma, bread and mayonnaise would be splayed on the counter for the production of leftover sandwiches, with a layer of stuffing and a slice of cranberry sauce ("slice" because we'd always have the store-bought canned kind—which never loses its cylindrical shape, ridges and all.)

It's Not Thanksgiving Without The Turkey—Or Is It?

There are various reasons for not eating the sacred bird on Thanksgiving. For starters, it's not cheap—the average 12 pound turkey costs between $0.99 and $2.99 per pound, depending on if it is turkey. According to the Farm Bureau's 35th annual survey, the average cost of a Thanksgiving feast in 2020 was just under $50 total (which frankly seems quite cheap). Then, there are the side stans and vegetarians, who opt for a smorgasbord of veggie-dishes, and maybe a loaf of tofurky to go with.

Despite my own nostalgia surrounding the ceremony of preparing and eating a turkey, I'm not the biggest fan. Frankly, the turkey isn't the most sumptuous of birds—certain parts can be downright flaky. While some might have a special technique, like sous vide–ing their way to perfection (please, do yourself a favor and watch these bros and their sous-vide disaster), for most of us, the answer is gravy.

I count my one turkey-less Thanksgiving among the most memorable.

During a semester abroad, I was living in the dorms at the Cité Universitaire, a campus for foreign students in the 14th Arrondissement of Paris. In my building, the Collège Franco-Britannique, our communal kitchen was equipped with a sole toaster oven, in which you could heat things atop a bed of charred toaster crumbs. Most of my classmates were in similarly kitchenless situations—in student housing or 6th floor apartments only accessible by a rickety back elevator, traditionally the service entrance, with shared hallway bathrooms and a single hot plate for cooking.

We were an international bunch: from the U.S., Norway, Greece, Israel, France, Colombia, Germany, Canada, the Netherlands, and the Czech Republic. In late November, when the other estadounidensesAmericans and I began feeling a creeping sense of Thanksgiving FOMO, we decided to have a friendsgiving in Paris. The others were curious about this secular, American holiday. Our Norwegian classmate, Mai, who had a comfortable, adult-seeming apartment near Notre -Dame de Lorette, offered to host us.

We had no turkey or stuffing, or really any of the traditional dishes that a Thanksgiving meal is usually comprised of. But we bought several rotisserie chickens from the butcher shop, a dozen baguettes, and almost everyone prepared their favorite sides. And we spent the whole afternoon swapping dishes and stories, raising our glasses, and polishing off many bottles of French wine.

Maybe it was the Beaujolais. But as day turned to night and we continued to graze, I forgot about missing all the things I love about Thanksgiving in upstate New York—the foliage, the gobblers, the football games, and my mom's stuffing—and enjoyed our ramshackle friendsgiving anyway.

Later it occurred to me that we had pulled it off. Because as long as you show up and commit to being a little more present and ceremonious for an otherwise ordinary Thursday meal, it will still feel like Thanksgiving—even without the turkey.

This year, my sister Mary Alice and her family are traveling from Dallas, Texas to spend the holiday at our apartment in Paris. My husband suggested we advance-order a turkey from the butcher. My response: Don't bother.

Instead, let's get a few roasted chickens from the boucherie on Rue des Martyrs. And we'll make the sides so good, maybe my brother-in-law will forget he's missing the Cowboys annual game back home. Together we'll eat until we're uncomfortably full and, of course, save some room for leftover sandwiches.