"This NYT report on the cover-up of U.S. war crimes in Syria should make your blood boil" 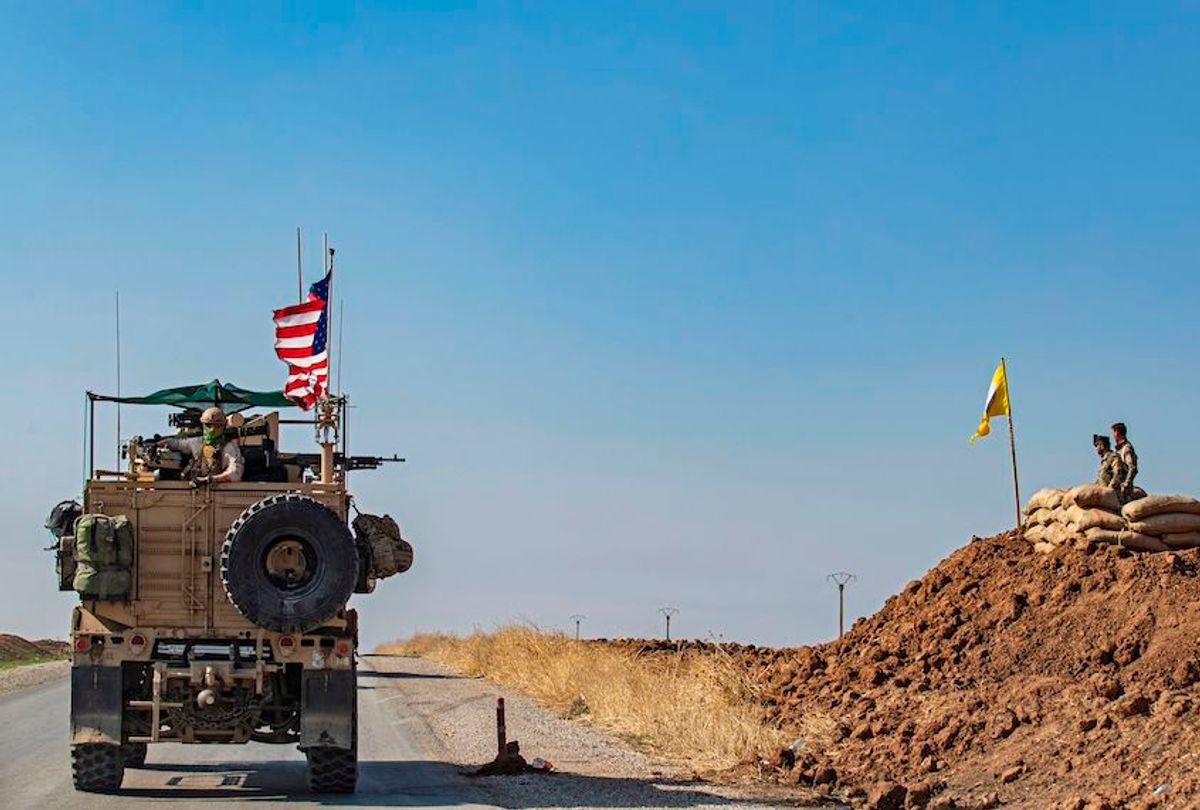 A US armoured vehicle drives past members of the Syrian Democratic Forces (SDF), during a patrol of the Syrian northeastern town of Qahtaniyah at the border with Turkey, on October 31, 2019. - US forces accompanied by Kurdish fighters of the Syrian Democratic Forces (SDF) patrolled part of Syria's border with Turkey, in the first such move since Washington withdrew troops from the area earlier this month, an AFP correspondent reported. (Photo by Delil SOULEIMAN / AFP) (Photo by DELIL SOULEIMAN/AFP via Getty Images) (Delil Souleiman/AFP via Getty Images)
--

Advocacy groups, human rights defenders, fellow reporters, and other readers of The New York Times were outraged Saturday after journalists Dave Philipps and Eric Schmitt published their investigation into a deadly 2019 U.S. airstrike in Syria and all that followed.

"This NYT report on the cover-up of U.S. war crimes in Syria should make your blood boil," Medea Benjamin, co-founder of the anti-war group CodePink, tweeted Sunday. "The U.S. wantonly kills civilians, covers it up, and then tells other countries how 'democracy' works. Infuriating."

Evan Hill, a journalist on the Times' visual investigations team, said that "this is a long, complicated story, but it's one that touches on nearly every problem with the global U.S. air war. At every attempt, the military tried to cover it up."

The Times began by detailing the scene over two years ago, when the U.S. military was using a drone near the Syrian town of Baghuz to search for Islamic State of Iraq and Syria militants, and encountered women and children along a river bank:

Without warning, an American F-15E attack jet streaked across the drone's high-definition field of vision and dropped a 500-pound bomb on the crowd, swallowing it in a shuddering blast. As the smoke cleared, a few people stumbled away in search of cover. Then a jet tracking them dropped one 2,000-pound bomb, then another, killing most of the survivors.

It was March 18, 2019. At the U.S. military's busy Combined Air Operations Center at Al Udeid Air Base in Qatar, uniformed personnel watching the live drone footage looked on in stunned disbelief, according to one officer who was there.

"Who dropped that?" a confused analyst typed on a secure chat system being used by those monitoring the drone, two people who reviewed the chat log recalled. Another responded, "We just dropped on 50 women and children."

An initial battle damage assessment quickly found that the number of dead was actually about 70.

After the strike, civilian observers "found piles of dead women and children," reported Philipps and Schmitt, who spent months investigating one of the largest civilian casualty incidents of the war against ISIS, relying on confidential documents, descriptions of classified reports, and interviews.

"A legal officer flagged the strike as a possible war crime that required an investigation. But at nearly every step, the military made moves that concealed the catastrophic strike," the pair explained. "The death toll was downplayed. Reports were delayed, sanitized, and classified. United States-led coalition forces bulldozed the blast site. And top leaders were not notified."

Gene Tate, a former U.S. Navy officer who worked on the Defense Department inspector general's inquiry into the strike, told the Times that he criticized the lack of action and was ultimately forced out of his position.

"Leadership just seemed so set on burying this. No one wanted anything to do with it," Tate said. "It makes you lose faith in the system when people are trying to do what's right but no one in positions of leadership wants to hear it."

According to Philipps and Schmitt:

This week, after The New York Times sent its findings to U.S. Central Command, which oversaw the air war in Syria, the command acknowledged the strikes for the first time, saying 80 people were killed but the airstrikes were justified. It said the bombs killed 16 fighters and four civilians. As for the other 60 people killed, the statement said it was not clear that they were civilians, in part because women and children in the Islamic State sometimes took up arms.

"We abhor the loss of innocent life and take all possible measures to prevent them," Capt. Bill Urban, the chief spokesman for the command, said in the statement. "In this case, we self-reported and investigated the strike according to our own evidence and take full responsibility for the unintended loss of life."

The only assessment done immediately after the strike was performed by the same ground unit that ordered the strike. It determined that the bombing was lawful because it killed only a small number of civilians while targeting Islamic State fighters in an attempt to protect coalition forces, the command said. Therefore no formal war crime notification, criminal investigation, or disciplinary action was warranted, it said, adding that the other deaths were accidental.

Both Tate and an Air Force lawyer — who didn't respond to the Times' requests for comment — reached out to the U.S. Senate Armed Services Committee to share concerns. Chip Unruh, a spokesperson for the panel's chair, Sen. Jack Reed, D-R.I., declined to comment on the incident.

However, Unruh told the Times more broadly that "when tragic errors occur on the battlefield, the United States, as the leader of the free world, has an obligation to be transparent, take responsibility, and do everything we can to learn from and prevent future mistakes."

The "breathtaking cover-up," as Washington Post investigative reporter Craig Whitlock called it, sparked criticism of the Defense Department as well as demands for accountability and reforms.

Nahal Toosi, senior foreign affairs correspondent at Politico, asked what the point is of having a Defense Department inspector general "if they a) don't do their job b) never release public reports of what they find in a case like this."

"This is nothing short of criminal conspiracy," said Daniel Mahanty of the Center for Civilians in Conflict. "They bulldozed the strike site and manipulated logs. Who is going to jail for this?"

CodePink reached the same conclusion of the U.S. presence in the Middle East, tweeting Saturday: "Make no mistake. There will be more of these atrocities and more dirty cover-ups if we if stay. We cannot allow that."