The enduring comfort of comida corrida

This 3-part set meal found across Mexico City is hearty, delicious sustenance for the body and the spirit alike 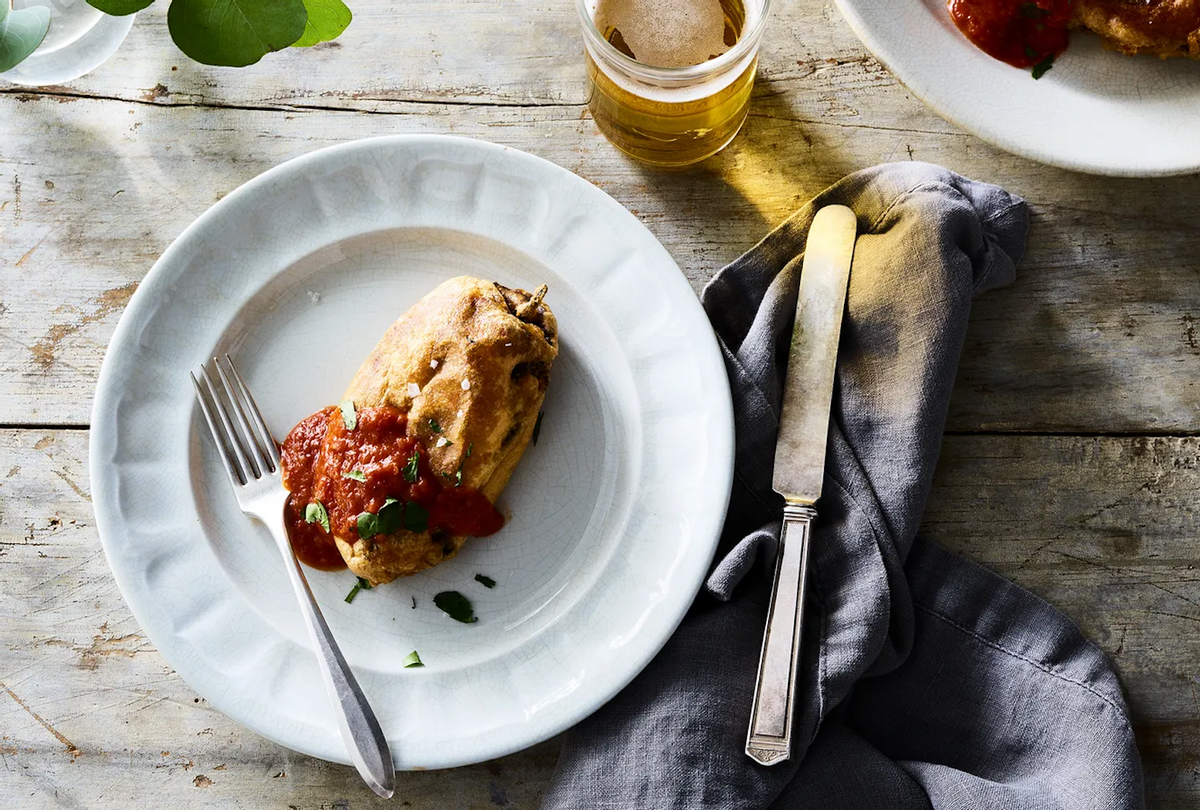 Ask anyone who visits Mexico City, and they'll tell you that they're there for the food. The dishes that circulate the bucket lists for tourists visiting the federal district — the bi-colored pescado a la talla at Contramar, Pujol's toddler-aged mole, and late-night tacos at Los Cocuyos — are destination dishes in their own right. But I tend to direct inquirers, friends visiting the city, and customers at my restaurant, Cicatriz, in a decidedly different direction: towards an unremarkable, un-Instagrammable plate of rice.

Rice is second in the three-course parade that is comida corrida, a pedestrian set meal offered at thousands of inexpensive restaurants throughout the city. Comida corrida or comida economica, literally "fast food" or "affordable food," preserves the ceremony of the modern midday break from work while reflecting the popular flavors that reverberate through Mexico City and the country at large.

At the turn of the 20th century, as urban sprawl pushed workers to travel further into the city with little time to return home for lunch, fondas, cafeterias, street stands, and markets became the feeding posts of the populus. Comida corrida joints popped up around factories and commercial centers to offer cheap sustenance to workers in a civil setting, with table service and choice from a menu of the day.

Over time, comida corrida menus have evolved and become a mainstay of restaurants across the city, offered at eateries from high-end fondas to the cheapest comida comunitarias. While a good many are quite lackluster, those with particular kitchen muscle have a 2 p.m. queue of dedicated customers waiting their turn to eat.

Today, the tradition lives on, sustaining the working class during the week. "Comida corrida is really such a lovely thing" Alonso Ruvalcaba, author of "24 Horas de Comida en la Ciudad de México," told me. "And of course, [it's] very Chilango, because the city is so large. If a worker has to travel two hours into the city center, they're not returning home to eat."

The three-course format of comida corrida allows the customer to choose the direction of the meal within a standardized rubric. The meal starts with soup, a sopa aguada with two types on offer: always chicken consommé, bolstered by a cube or two of Knorr seasoning, with chunks of carrot and chayote waiting at the bottom. The second soup is a wildcard, often a crema, or a puree of zucchini or corn that may or may not be enriched with cream, or sometimes a lentil or fava bean soup. The thinner the soup, the cheaper the meal.

The second course steadies the procesion with carbohydrates, sopa seca," or "dry soup" — an amusing turn of phrase amounting to rice, fideo seco, or pasta. The rice, oil-slicked and strewn with a confetti of cubed vegetables, is a good gauge of the prowess of the kitchen. There are white, red, and green versions. While rice is a seemingly-simple dish, the layers of technique and a careful hand are needed to produce well-seasoned, individual grains bound by sofrito and just enough liquid — a precision that only comes with years of experience and hundreds of pots of rice. Fideo is a dish with Spanish lineage: vermicelli noodles fried and cooked in seasoned broth until tight and reduced, then topped with sour cream, cotija, avocado, and diced onion. Pasta is a contemporary take on the dish using dried spaghetti, penne, or elbow noodles cooked to death and tossed with a loose tomato or cream sauce and showered in grated cheese.

And finally, a third course, the most substantial, which one selects from an ever-changing roster of guisados and stews. Here, the greatest hits of 20th-century Mexican cooking emerge: chile rellenos fried in an whipped egg-white batter and soaked in liquified tomato; cerdo con verdolagas, pork braised with tart purslane; enchiladas verdes, suizas, or rojos; pollo con mole; thin sheets of milanesa de res fried golden; flautas under a mop of shredded lettuce; the divisive higado encebollado, or liver and onions; regional dishes like cochinita pibil, mixiote, and pozole; and a whole host of stews centered on a particular chile sauce like guajillo, morita, chipotle, rojo, or verde. To appeal to modern tastes, one out of the three guisos is a "vegetarian" option. These often take shape as tortitas, little patties made from broccoli, huauzontle, or potato, bound with egg and fried; or avocado stuffed with tuna salad and flanked by packaged Saltines. And there are dozens more.

"There was one month where we didn't repeat a single dish!" Juan Avila, the proprietor of El Festín de la Roma, an 11-year-old fonda on a busy Colonia Roma corner told me. "I'd estimate we can produce around 100 different guisados." The guisos shift and change due to the cooks' whims, the availability of product, and, most importantly, cost. "You can't use avocado right now — we just can't make it work" Avila said, "it's 70 pesos a kilo."

Like the thousands of other fonda operators in CDMX, the economic structure of a comida corrida demands selling as many meals as possible, as cheaply as possible. The price for a meal is a barometer for the socioeconomic standing of the neighborhood in which it is located: 50 pesos is standard, but glitzier neighborhoods' comida corrida can rise to 80 pesos.

When I first moved to Mexico City six years ago, I would eat comida corrida at least three times a week. I was trying to finish my dissertation for a PhD in sociology, a path taken up after a decade of line cooking in Brooklyn. Hunkered down in Roma Norte, I would write in the mornings, drinking instant coffee until hunger would overtake me and I would go for my one meal of the day. I would walk around, reading the handwritten menus at mom-and-pop fondas, and dine at whatever restaurants' menu caught my eye. And regardless of where I'd go, I'd find different versions of the same meal, a comforting continuity.

Like other urban creatures, I found the fondas I liked the best. I was drawn to the corner spot whose rice walloped with garlic and the slightly cheaper menu across the street with a chile de arbol salsa laced with ground peanuts. If Doña Isabel's sopa de haba was on the menu, made from dried yellow beans with a magnetic funk that could be smelled down the street, I would sit, WhatsApping photos of my meals to my Mexican cook comrades in Brooklyn.

This was not my mother's cooking. To see Doña Mari and Doña Lilia in the kitchen, frying eggs and checking the consomme, was a comfort offered not by bloodline but by the everyday peregrinations of habit and tiny, banal ritual. To see them was also to receive a daily culinary education.

I learned how black beans taste when cooked with avocado leaf, and that both cilantro and mint are appropriate in the chicken broth. I soaked up the spectrum of green salsas from emerald raw to the deeply acidic army green, cooked down with tomatillo. I noted the little flourishes and customizations one could make to their meal: You can add a fried egg to the rice course, or fried plantains, or fresh banana (sounds out of place, is delicious). And you can always ask for beans with the stew, for free. A head nod towards the other diners and a "buen provecho" is polite practice when getting up at the end of the meal. While the food taught me how to eat, the meal, with its customs and pocket rituals, assimilated me to the city.

For many other city dwellers, a favorite fonda becomes a third place, an anchor of community via routine and repetition. The home-style meals made by women who have lived through economic crashes, earthquakes, and decades of political corruption, offer a brief sense of belonging in a miniature portion of bananas tossed in cream.

Daniel Hernández, a culture reporter for the LA Times and fellow comida corrida enthusiast, agrees. "My family is from the North. I do get the sensation of the memories of my grandmothers, or my tia, when eating certain dishes like albondigas." Comida corrida is a channel into a style of cooking that has changed little in 50 years, relying on recipes that have been passed down from generation to generation. Most kitchens are led by women, aunties, grandmothers, and sisters, with embodied culinary knowledge and their own unique sazon. "Even for me, as a migrant to Mexico City, a foreigner," Hernández said, "comida corrida can let [me] tap into that vibe, that familiar experience of eating at home with [my] family, the intimacy."

I still drift into my local fonda on a weekly basis. When I go, I hope that my migrant friends toiling away in basement kitchens and on delivery bikes in my native city are similarly transported — when they sit down to a plate of red-tinted rice on their days off, 2,000 miles away.

Roman, a cook at my restaurant, Cicatriz, makes the best rice to accompany our family meals. Though a simple dish, there's nuanced technique here: The rice is soaked in water for 30 minutes before being drained to dry out for another 30, then fried in substantial oil for almost another 30 minutes, to achieve a red-flecked hue and fluffy, individual grains. Try with sliced raw bananas.