“Red scare tactics”: GOP senator called out for questioning whether Biden pick is a Commie

“I don’t know whether to call you professor or comrade,” said Louisiana Sen. John Kennedy to Saule Omarova 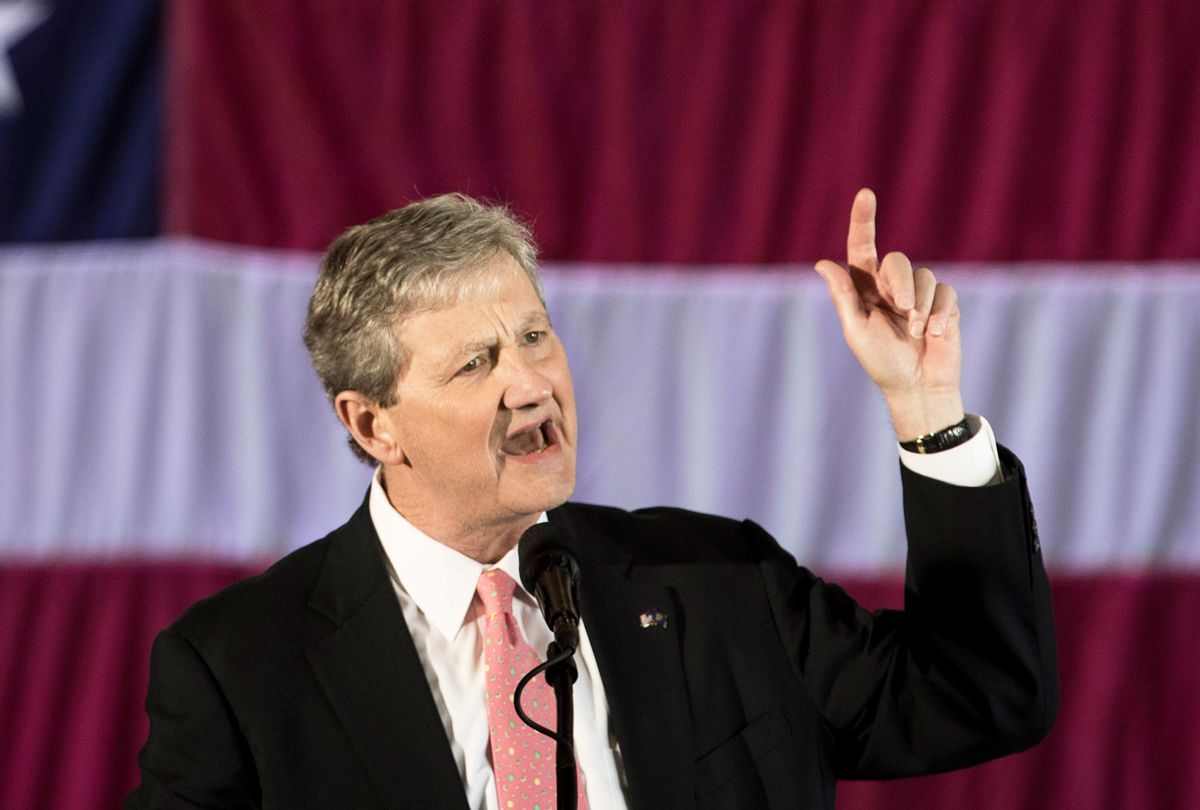 "I don't know whether to call you professor or comrade," Kennedy told Saule Omarova, a former Bush-era Treasury Department official who is now a law professor at Cornell, during a Senate Banking Committee confirmation hearing.

"Senator, I'm not a Communist," Omarova replied. "I do not subscribe to that ideology. I could not choose where I was born."

Omarova was born in Kazakhstan while it was still part of the Soviet Union. She attended Moscow State University before coming to the University of Wisconsin as an exchange student. The Soviet Union collapsed while Omarova was living in the U.S., and she ended up staying in Wisconsin and becoming an American citizen and a prominent expert on banking regulation. After Biden nominated her to oversee the Office of Comptroller of the Currency, which oversees large nationally chartered banks and lending policies, bank groups launched a fierce lobbying campaign to oppose her.

Kennedy, an Oxford-educated lawyer known for his folksy huckster schtick, began by questioning whether Omarova had resigned from the Komsomol, a Soviet youth organization that she belonged to as a child. Omarova explained that all children in the country were required to join the program, which they left upon reaching adulthood. Kennedy was unconvinced and demanded to know whether she submitted a formal "resignation letter" to an organization that has not existed since at least 1991.

Omarova has been described by academic experts as "one of the top financial regulatory scholars in the world" and has written articles in favor of stricter financial regulation and a federal government program to offer every American a bank account, in order to reduce the number of "unbanked" Americans. Kennedy argued that her research, and a college thesis she wrote in Moscow titled "Karl Marx's Economic Analysis and the Theory of Revolution in the Capital," suggested that she still harbored Communist sympathies:

You studied at university, at Moscow State University, scientific Communism, which is the science regarding the working-class struggle and the socialist agenda. In 2019, not 30 years ago, in a Canadian documentary, you called the financial services industry "a quintessential asshole industry." You wrote a paper called "Systemically Significant Prices," calling for the federal government to set wages, food, gas prices.

In 2020, you wrote a paper called "People's Ledger" where you said we need to abolish bank accounts and have everybody set up an account at the Fed where the federal government will have access to your data. In 2020 you wrote another paper called "The Climate Case for a National Investment Authority," where you said what we need to do to the oil and gas industry is have the federal government bankrupt them so we can tackle climate change. In 2019, you joined the Facebook group, a Marxist Facebook group, to discuss socialist and anticapitalist views.

"I do not remember joining any Facebook group that subscribes to that ideology," she said. "I would never knowingly join any such group. There is no record of me ever actually participating in any Marxist or Communist discussions of any kind. My family suffered under the Communist regime. I grew up, half of my family, my grandmother herself escaped death twice under the Stalin regime. This is what is seared in my mind. That's who I am. I remember that history. I came to this country. I'm proud to be an American. And this is why I'm here today, Senator."

"She wants to nationalize the banking system, put in place price controls, create a command and control economy where the government allocates resources explicitly, instead of free men and women making their own decisions about the goods and services they want to buy and sell in an open market," he said. "These are exactly the kind of socialist ideas that have failed everywhere in the world they've been tried."

Omarova disputed that she has such aspirations and explained that as currency comptroller she would not have any power to nationalize banks.

"My job will be simply to make sure that all national banks are safe and sound, and they take into account all the risk factors when they decide to lend to one business or another business," she said. "That's not going to be up to me."

While Omarova held her cool during the Republican attacks, Democrats on the committee took issue with the Joseph McCarthy-style tactics.

"Senate Republicans have a formula. Start with a passing and inaccurate reference to her academic work, distort the substance beyond recognition, mix in words — Marx, Lenin, communism. End with insinuations about Prof. Omarova's loyalties to her chosen country," said Committee Chairman Sherrod Brown, D-Ohio. "That's how Republicans turn a qualified woman into a Marxist bogeyman. … Now we know what happens when Trumpism meets McCarthyism."

"This is a vicious smear campaign, coordinated by Republicans who are doing the bidding of giant banks that want to keep gobbling up smaller competitors, want to keep ripping off their customers, and want to keep getting away with it," she said. "Wall Street feels threatened, so they have launched an ugly, personal assault on a respected person who never sought the spotlight. It is disgusting. And anyone who participates in this malicious character assassination should be ashamed of themselves."

Omarova does not need any Republican votes to be confirmed in the Senate, but her confirmation remains in doubt after moderate Democrats also expressed concerns about her during the hearing. Sens. Mark Warner, D-Va., and Jon Tester, D-Mont., complained that Omarova opposed a 2018 bill they backed to loosen some of the post-2008 regulations on regional banks in the Dodd-Frank law. Omarova explained that her objection was because the bill "inadvertently" provided new loopholes for the biggest banks. Warner said he "very much" disagreed with her view, raising questions about whether the committee will advance her confirmation to a full Senate vote.

Brown expressed optimism that Omarova, who has drawn support from the progressive wing of the Democratic Party, would be confirmed, especially in light of Republican attacks.

"Every Democrat in this body just finds repulsive the attacks on her," he said. "Being called a comrade by Kennedy, I know there's a sense of decency among my colleagues, and she will be confirmed."

Watch the exchange between Kennedy and Omarova below, via YouTube: