The cult-favorite Showtime series returned this year as "Dexter: New Blood," a continuation of the original 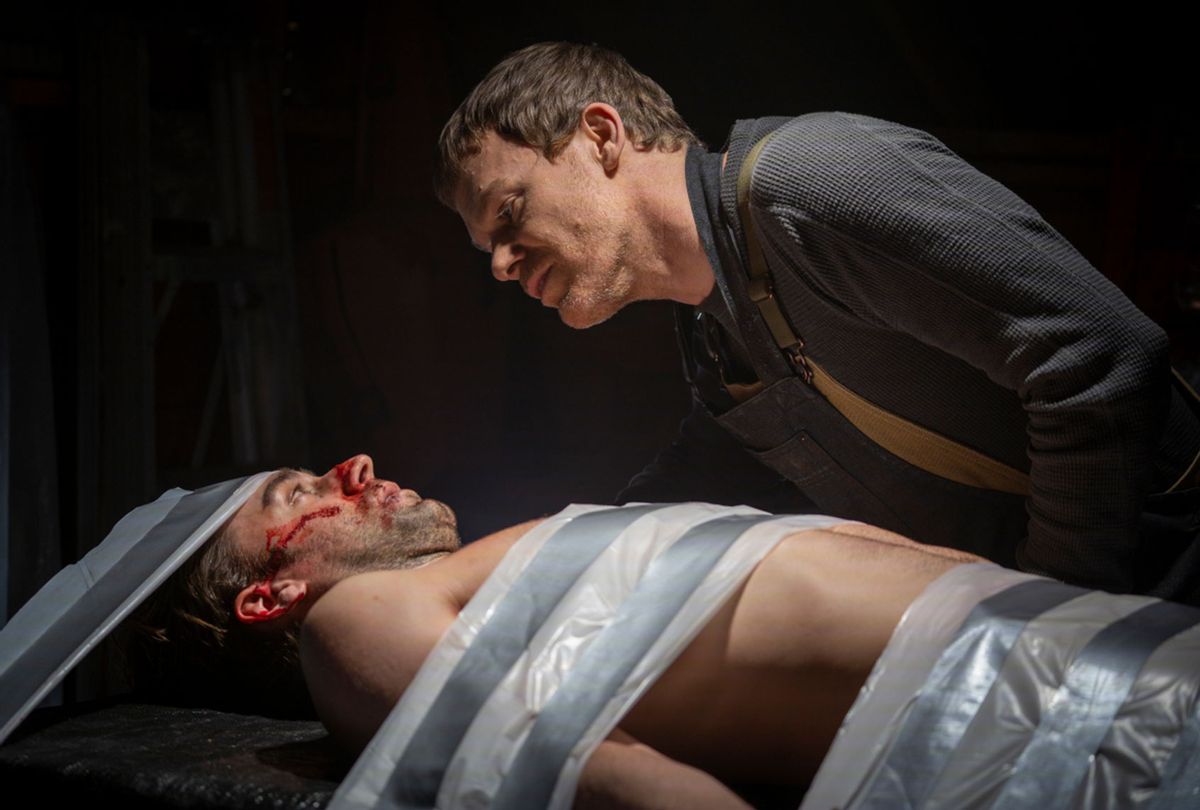 When "Dexter" debuted on Showtime on October 1, 2006, it changed the landscape of TV. It premiered before antiheroes like Don Draper or Walter White were household names, and it helped put Showtime on the map with its original programming.

Dexter Morgan (Michael C. Hall) works as a blood spatter specialist at the Miami Metro Police Department, but also moonlights as a serial killer. He has a code, though: Don't kill innocent people, don't get caught, and don't get emotionally involved. For eight seasons and 96 episodes, Dexter literally got away with murder. But as heard through his internal dialogue (a.k.a. The Dark Passenger), he was conflicted about his real self and only shared the truth with a few people — most of whom ended up dead.

On the show, Dexter's not-biological sister Deb (Jennifer Carpenter) falls in love with him, which added to the conflict — especially since, offscreen, the two got married and divorced during the run of the show. The series ended in September 2013 with a polarizing finale: Dexter lived, but others died in his wake. Now, Hall is back to rewrite television history with "Dexter: New Blood," a limited reboot of the Emmy- and Golden Globe Award-winning show.

Hall's first show, the funeral home drama "Six Feet Under", went off the air in 2005, so he wasn't looking to jump back into TV again. "I got a call about a new pilot," Hall told Entertainment Weekly. "I was reluctant to the idea of doing another television series in general." He heard the pitch and asked himself, "'Do I want to be surrounded by dead bodies for another indeterminate number of years?'" He read the book and the script and decided he liked that Dexter "operated in a morally gray area."

"The tragedy of Dexter is that it's not his homicidal behavior that's gotten the people in his life in trouble but it's his appetite to play at becoming a human being — his desire to have real relationships," Hall said. "I guess a lesson that's emerged is that you can't have your cake and kill it, too."

In 2004 Jeff Lindsay published "Darkly Dreaming Dexter," the first of eight novels surrounding the charming serial killer. The book was the basis for the show's first season, but the rest of the seasons strayed from the novels. Lindsay said the inspiration for the character came to him rather randomly: "I was speaking at a business booster's lunch. I don't know why, but I looked out at the crowd, and thought, 'Serial murder isn't always a bad thing.'" That was the message Lindsay tried to get across in his book, and the idea that carried through to its television adaptation.

"I think Dexter is actually very moral — there are lines he will not cross, no matter what," Lindsay said. "I'm hoping he makes us think a little about what is and isn't moral, and where the whole idea of a conscience comes from, but if not, hey, just enjoy the book."

3. John Lithgow thinks Dexter and Tony Soprano have a lot in common

During an interview with the "Los Angeles Times," a reporter asked John Lithgow — who played the Trinity Killer, the main antagonist in "Dexter"'s fourth season (who we will see again in "Dexter: New Blood") — who some of his favorite villains had been. "The great evil creation of the last 10 years has been Tony Soprano, and I see a lot of similarities between Dexter and Tony," Lithgow said. "Obviously, there are a lot of huge differences, but he's a captivating character. You can't get enough of Tony Soprano: even when he was slapping a Russian prostitute on the butt or killing people in the most gruesome manner, you're still with him all the way. I think Michael C. Hall and James Gandolfini are both great, smart actors who really understood that duality, that's what made it so hypnotic."

4. David Zayas was a cop in real life

David Zayas portrayed Lieutenant Angel Batista on "Dexter" and was a cop in real life, too. While working for the New York Police Department, Zayas studied acting. "The moment I was involved in that world, it electrified me and I realized that it was something that I wanted to do," Zayas told NPR. He didn't tell many of his co-workers he was trying to become an actor, but his partner knew.

"I remember riding in the cars with [my partner] during the midnight shifts and he would run lines with me for my audition the next day," Zayas said. For the past two years, Zayas has played another police officer on the second and third seasons of "Bloodline," another show set in Florida.

5. Julie Benz made a joke out of her character's death

Julie Benz played Dexter's wife, Rita, until the end of season four, when the Trinity Killer sought revenge and murdered her. But Benz felt shocked when she discovered her demise was coming.

"I found out an hour before they put out the script," Benz told MTV. "Then I only found out an hour before we shot the scene how I was going to die — they wouldn't tell me or anybody. It was the last scene of the season, so my family — the crew, who I spent five years with from the pilot forward — was very emotional and upset because they couldn't believe it. I at least had a couple of days to process it, so I brought in a Styrofoam tombstone and I floated in the bathtub that said R.I.P. just to make a joke. I needed some kind of levity! Saying goodbye to my character, my job and people I love, was just too heavy."

During an interview with the Los Angeles Times, Lithgow — who won a Guest Emmy for playing the Trinity Killer — said his character was "far more than one-dimensional. Even in the first episode, you see him commit this horrific murder, and it looks like pure evil, but the next time you see him, he's in that scalding shower, torturing himself with remorse. Something's going on: there's a lot more going on here than just sadism and evil."

When he's not killing people, Lithgow's character, Arthur Mitchell, tries to be a family man and fit in with society, which humanized his character. "To me, the most fascinating thing is that he's an evil man who does not want to be evil," Lithgow said. "In that sense, he's sort of a mirror image of Dexter, just a much, much more extreme case."

Yvonne Strahovski played Hannah, Dexter's serial-killer girlfriend in Seasons 7 and 8, and was one of the few people who had enough of an emotional attachment to Dexter to survive. "I was surprised when I got to the end of Season 7, and I read that scene where she leaves the black orchid at his doorstep, I thought, 'Wow, this is a pretty open ending. This might mean that they want me back,'" she told Collider. And sure enough, Season 8 happened and I thought, 'Well, I probably will end up dying in this season, seeing as I didn't die in Season 7, and traditionally, most of the guest stars on that show usually die.'"

The show ends with Dexter's son Harrison and Hannah fleeing to Argentina, with Dexter battling a hurricane in Miami. Later on Hannah hears about Dexter's death, which unbeknownst to her was faked. "There is no happy ending in any of it," she said. "I walked away feeling very depressed, and it really stayed with me. That feeling lingered for a while after I watched it."

Jennifer Carpenter told The Hollywood Reporter she wanted her character to die but didn't want Dexter to do the deed. "In a strange way, I wanted her [death] to be a suicide," she said. "I wanted Deb to take the one thing that was totally alive in his life away. But how it played out was much better. Deb deserved to die an organic death."

Carpenter also said if Deb had lived, she probably wouldn't have had a happy ending. "She always would have been making sure she was piling enough dirt on the secrets that existed with Dexter. I'm not sure a happy ending was possible for her. This was her happy ending."

In 2009, an Indiana teenager named Andrew Conley strangled his 10-year-old brother. The reason? "He felt just like Dexter." And if that wasn't bad enough, Mark Twitchell built a Dexter-like kill room, lured strangers off the internet saying it was part of a "Dexter" movie he was making, and then murdered Johnny Altinger. In 2011 Twitchell was sentenced to prison, where he continued to watch the show and even drew pictures of Michael C. Hall.

The big question of the series finale was: Would Dexter live or die? He almost died in a hurricane, but Showtime was adamant he needed to live. "They [wouldn't] let us kill him," producer John Goldwyn said. "Showtime was very clear about that. When we told them the arc for the last season, they just said, 'Just to be clear, he's going to live.' There were a lot of endings discussed because it was a very interesting problem to solve, to bring it to a close. People have a relationship with "Dexter," even if it doesn't have the size and the ferocity of the fan base for "Breaking Bad." But it has a very core loyal following."

Dexter did sort of die, though. He faked his death and ended up at working as a log driver in the Pacific Northwest. "He banishes himself, if you will, into exile," executive producer Sara Colleton told TV Line. When he looks into the camera in the end [of the finale], the rest is silence; there's not even a voiceover there anymore. It's just emptiness . . . Committing suicide is too easy; that's letting himself off the hook."

Hall commented on the finale saying, "Sometimes I wish he'd offed himself, wish he'd died, wish Deb had shot him in that train compartment — of course, that would have made an eighth season difficult to do . . .  But the idea that he imprisons himself in a prison of his own making I think is fitting [for the character]."