I gave up drinking in 2018 because it wasn't fun for me anymore. But during the holidays, abstaining has challenges 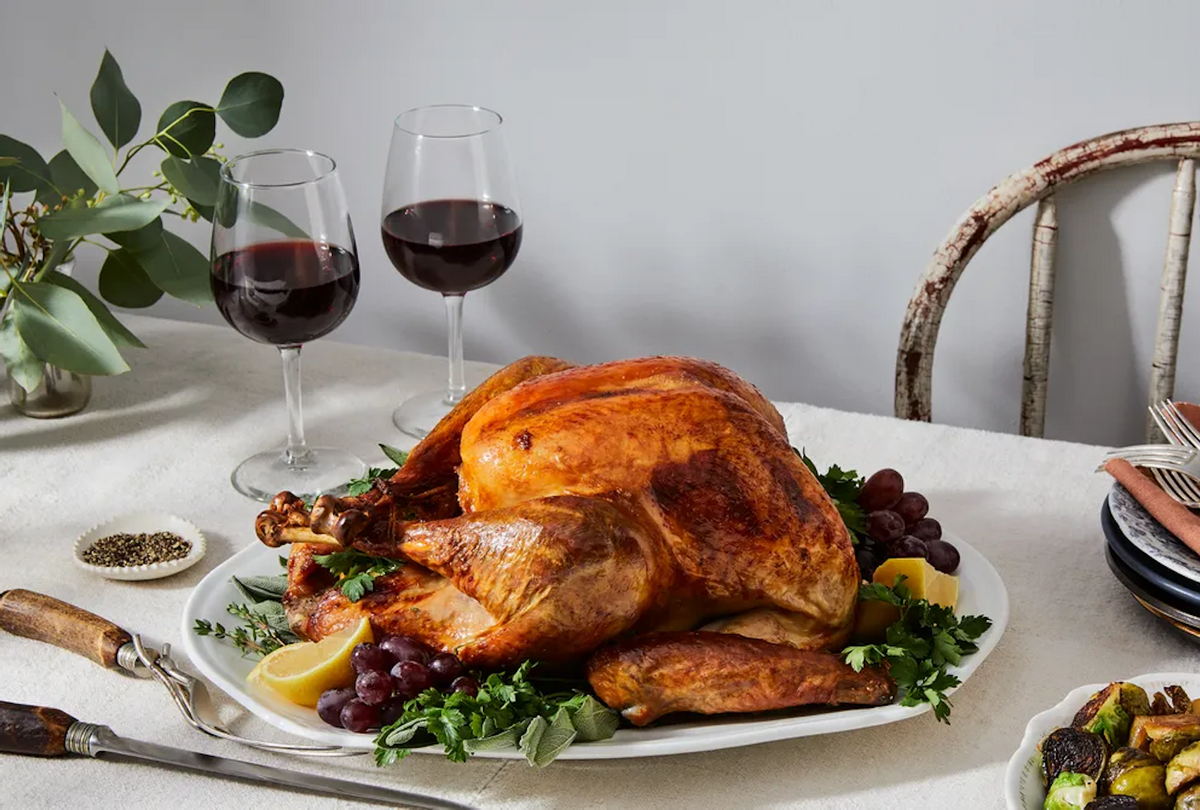 I stopped drinking in late 2018, the part of the year that leans toward Thanksgiving and the downhill cascade of holidays that follow it. I wasn't dealing with an addiction, exactly, and therefore my experience of quitting alcohol was much easier than it is for many people: I didn't like how alcohol made me feel anymore, and I was no longer getting any enjoyment from it to counterbalance its negative effects in my life. In short, I didn't like drinking, so I stopped doing it. For this reason, I try to say that I stopped or quit drinking rather than that I got sober, to make a clear differentiation between the relatively straightforward process of letting go of a bad habit, and the far thornier and often lifelong struggle of a recovering alcoholic.

The truth is that I rarely miss drinking, and when I do, it's occasion-based and never actually about the booze itself. There are certain events — almost always a celebration of some kind, whether an official holiday or just the festive exhale on a Friday afternoon at the end of a long week — that make me wish for the gesture of a drink, without the actual drink itself. Thanksgiving has been one of the times when I have had to work the hardest to re-create that gesture, underlining the holiday aspect of a holiday through other means.

It's easy to see why Thanksgiving is a drinking holiday: It's a day off in the middle of the week, right when the weather starts to get cold. It's a holiday that starts in the morning, especially if you're the one doing the cooking. It's a day with no rules, except for consumption and abundance, and also one that's frequently rather stressful. There are lots of reasons to drink on Thanksgiving; the day itself seems to demand it, both from the standpoint of celebration, and as a way of coping. It is, therefore, one of the more difficult days of the year to abstain from alcohol.

There are multiple ways in which alcohol acts as punctuation on Thanksgiving, across the long bend of the day toward its big meal and the food-coma afterparty. "Have a drink!" said my dad, watching me begin to collapse into panic over the timing of a tricky recipe. "You know what makes cooking more fun? A glass of wine in one hand while you do it," he reiterated when I asked everyone to leave the kitchen so I could focus on a pumpkin pie with incredibly fiddly steps and timing instructions. I wanted to. I wanted to have the drink that would smooth out the experience, that would make it convivial, the glass of wine that I used to imagine would turn me into one of those people who could have a breezy conversation in the kitchen while cooking, keeping barely half an eye on the stove.

But I'm not that person, and part of the reason I stopped drinking is that alcohol, no matter how many times I tried, does not turn me into her. Not drinking was, for me, about facing up to these sorts of facts, admitting and then navigating the distances between the kind of person I wished I could be, and who I actually am. The glass of wine that turns a stressful task into one more aspect of a lazy day off in the middle of the week — yes, you have to get up early and cook a million things, but you can have a drink at 10 a.m. while you do it, this is a holiday — isn't reachable for me. Creating that holiday feeling, the one where I remember that doing the cooking on Thanksgiving is ultimately a leisure activity, comes not from booze but from being honest with myself. I might not ever really be able to find cooking less stressful, but what I can do is admit that the stress is part of what I enjoy about it. I like doing a high-stakes task, and I like having it turn out well against all odds. The buzzy endorphin rush of getting everything into the oven early enough in the day to sit down on the couch and let my sweat dry while I watch the parade on TV is closer to what I was once looking for from booze than what booze ever actually offered me.

These punctuation marks continue through the day, and each time a similar sort of longing flares up in me. Thanksgiving is supposed to be about family, biological or chosen or thrown together. It is about welcoming people into your home, or being welcomed into theirs. It says come inside and get warm, this room is a place where you belong. That welcoming sense, that hosting emotion, is one that also often finds a companion in alcohol. It is gesturally related to offering someone a drink or accepting the offer of one, to starting out the afternoon with cocktails, to getting a little buzzed before the meal, setting in the cozy, day-off ambience. The drink is the paragraph break, marking out the difference between the workweek and the holiday, between the cold world outside and the party inside.

That party proceeds into a meal which often starts with toasts, which are the most obvious way in which alcohol is a punctuation mark, obligatory and superstitious. You're supposed to drink to celebrate, to demonstrate gratitude, to say thank you to the host and whomever else did the cooking. If you did the cooking yourself, drinking the toasts and then drinking more during the ensuing meal is meant to be the reward for your hard work. The fact that you are allowed to get gently buzzed, or even totally wasted, was always, at least for me, proof of a job well done. I'm finished and nobody can ask anything of me, which I can prove by minorly or majorly incapacitating myself.

Later in the evening, alcohol keeps the party going after the meal. It's a way to show people that they don't have to go home yet or go back to their weekday lives. It's still a holiday because we can keep drinking. Alcohol is part of the syntax of Thanksgiving, and it's the fuel that gets us from one end to the other of it, at least for many people, at least in a certain, relatively common version of the holiday.

I have always loved the no-parents-no-rules feeling of a Friendsgiving, the big gatherings I've had and attended throughout the years in which a motley crew of people who for whatever reason couldn't or didn't want to be with their families on Thanksgiving gathered together in somebody's home, re-creating the parts of the holiday we liked and leaving out the ones we didn't, making up new traditions, or doing the old ones in a bigger and more over-the-top way, to prove that we could, that we did not need the structure and frame of our given families in order to have the holiday we had imagined, in order to celebrate the things we wanted to celebrate.

Perhaps, then, not drinking on Thanksgiving can be understood in a similar way. At least, this is how I have come to think of it, over the course of a few years of celebrating Thanksgiving without booze. There are lots of aspects of this holiday I don't like at all, starting with the origin story itself, which is an execrable whitewashing of just one episode of colonial violence out of the many that make up America's history. When I say "celebrating Thanksgiving," the phrase itself makes me queasy; I have no desire to celebrate any of the history that this holiday was created in order to honor, or the Thanksgiving that is taught to American schoolchildren.

But I keep having a big, food-laden party on this day because there's so much I love about the traditions that have grown up around it, the ones that can — at least I hope they can — be pried apart from the ugly story at its root. I think of this Thursday in November as a day to celebrate gratitude, abundance, and laziness, a day free from work and free from the ideas of scarcity that isolate us from one another. A warm room and a heaving table, at which everyone I love is welcome, is a holiday on its own.

Family is another obligation built into Thanksgiving, but after many years of Thanksgivings around tables that included no one to whom I was biologically related, I realized that that aspect was also optional and unnecessary, and for many people runs counter to the welcoming, grateful idea of the day. If family, and history, can both be sheared off of the definitions of this day, then so can alcohol.

The longing I have for a drink on Thanksgiving, just like any time I have a longing for a drink, isn't really about that drink, in the same way that Thanksgiving isn't really about family. What I want is welcoming, or gratitude, or the joy of feeling stressed out and important and then tired and accomplished. I want to celebrate the people I love, and make them feel celebrated. I want to feel like there is more than enough for everyone. I want to feel like it is warm inside while it is cold outside, and that a bright gathering of people, whether that's two people or 20, and whether or not any of those people are related to one another, can defeat the encroaching winter, can raise up a celebration loud enough to drown all our worries for a day. Booze is, for many people, one way to get there, in the same way that family is, for many people, a way to feel embraced and brought in out of the cold. But these aren't the only ways. Boozeless Thanksgiving is itself a celebration, a reminder that our holidays are self-made, and that it is in our power to change their meanings, to make them what we actually want from them, and not what we are told they should be.