18 best ways to use leftover stuffing (if you have any)

Go beyond the Thanksgiving sandwich with these creative recipes 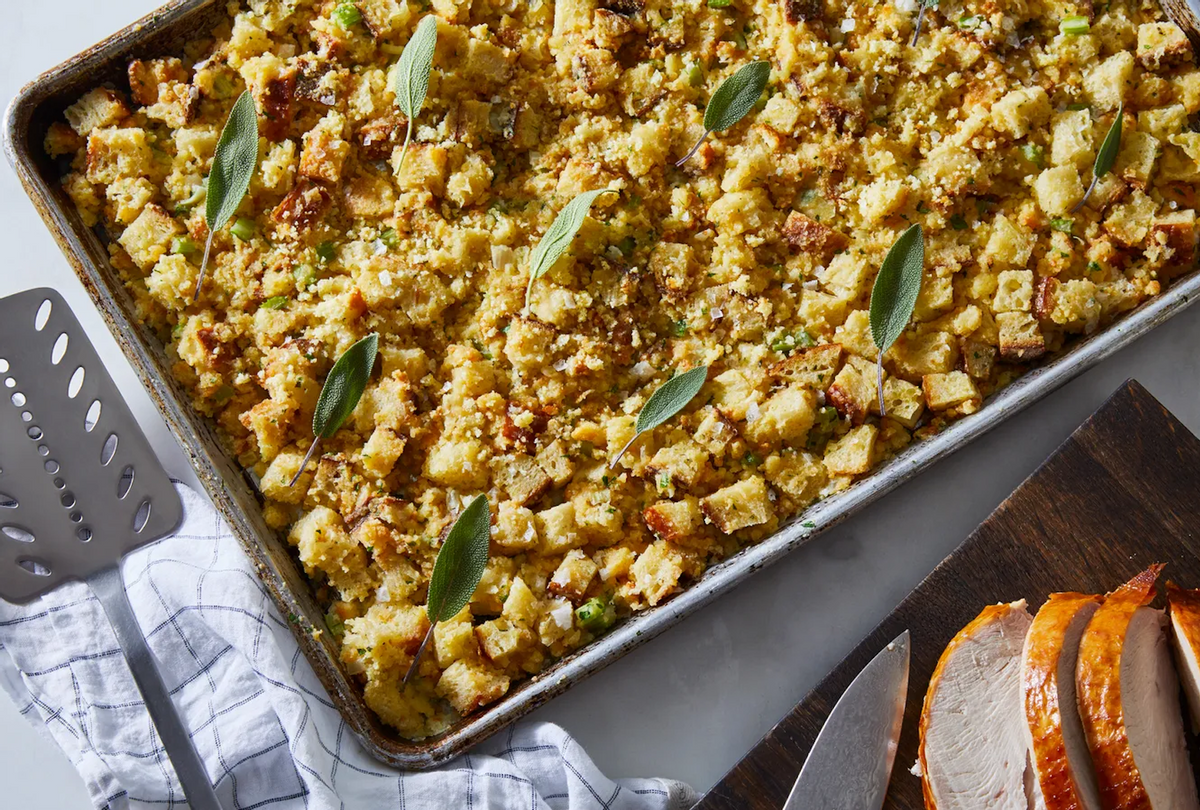 When it comes to Thanksgiving table hierarchies, for me, stuffing sits securely at the top. Whether you call it stuffing or dressing; make it from cornbread, hand-torn white bread, or the pre-hardened croutons from a bag, I will love it. And when it comes to leftovers, stuffing is more than just another topping on the beloved next-day sandwich.

Here are 18 ideas for recipes to transform leftover stuffing into meals, plus some of our favorite stuffing recipes (though they're so good you may not have any left over, just saying.)

If you are going to make the almighty leftovers sandwich, go the extra step instead of microwaving the stuffing—or worse, leaving it cold. Use a cookie cutter or paring knife to cut out stuffing patties from whatever's left in the baking dish. If your stuffing is super dry the next day, pour a few tablespoons of leftover stock over to moisten it before cutting your patties out. Fry the rounds in a skillet with a tablespoon or two of butter. Slide them onto a slice of sourdough or halved English muffin with leftover turkey, cranberry sauce, mashed potatoes, and gravy. These little disks of buttery goodness will make any Thanksgiving leftovers sandwich shine.

If you're all turkeyed-out, or don't partake in poultry, transform that stuffing patty into a stuffing patty melt. Bread on bread on cheese? Sounds about right to me.

If you're a stuffing purist or catering to picky eaters who only want the original flavor in their leftovers, whip up a batch of stuffins' (a.k.a. stuffing muffins, a tip I learned from Budget Bytes). Mix stuffing with eggs and cream or milk to bind, and scoop into a muffin pan. Drizzle each muffin with melted butter and bake for 25-30 minutes at 375°F until warmed through and crisp.

More of a brunch person? For a decadent brunch after Turkey Day, throw together a batch of stuffing cakes, inspired by Well Plated. Mix about 2 cups of leftover stuffing with an egg to bind. If you have any herbs, grated or crumbled cheese, or chopped bacon on hand, fold those in as well. Pan fry the cakes in butter, and top with a poached or soft-boiled up egg and flaky salt.

Break out the waffle iron you got last Black Friday for stuffing waffles. Fold in a bit of stock to loosen up the stuffing, then press an even layer of stuffing into a waffle maker. Top with a fried egg and drizzle with gravy and cranberry sauce.

Stuffing baked eggs are sort of like shakshuka, but instead of spicy tomato sauce, you'll use stuffing! Fill a cast iron or nonstick skillet with stock-refreshed stuffing, make a few divots in the surface—I like to use the cracked eggshells to gently press these holes for the eggs to sit in (bonus points: one tool fewer to wash!), but a spoon will work too.

Sausage and cornbread stuffing is a natural fit with eggs, and works perfectly for brunch repurposing.

Repurpose your stuffing to stuff something else, like mushrooms. Remove the stems from portobello or Baby Bella mushrooms and fill them halfway with like Boursin or chevre. Top with leftover stuffing and bake, stuffing-side up, until the mushrooms are tender and the stuffing is crisp.

No mushrooms on hand? Turn stuffing into dinner with stuffed peppers. Substitute leftover stuffing for rice or whatever grain you'd typically use in stuffed peppers (peek at these lamb and halloumi or this vegan harissa-tahini recipes to get inspiration.) Or keep it simple: Top stuffing-filled peppers with your favorite grated cheese and bake until the peppers are soft and the cheese is melted.

When it comes to stuffing (other foods with stuffing), my favorite vegetable for the job is decidedly squash. Grab a delicata or acorn squash, halve and scoop out the seeds, then bake until tender, then fill with stuffing and bake for a few more minutes. Garnish your stuffed squash with any and all fresh herbs you have on hand. If you want extra credit, try swapping stuffing for the pesto in these Squashduckens.

A classic, buttery stuffing like this one lends itself well to leftover makeovers.

Put on a pot of turkey and stuffing-dumpling soup. First, make a stock from your leftover turkey carcass. Then make balls of stuffing to mimic dumplings or matzo balls: Mix stuffing with an egg and a few tablespoons of flour for every cup of stuffing. Scoop stuffing balls into simmering broth and cook until the dumplings float, about 3-4 minutes. Toss in shredded leftover turkey and any roasted veggies you have hanging around. This quick, hearty soup will warm you up without sending you back into last night's food coma.

Try your hand at stuffing meatballs: Soak leftover stuffing with some milk to make a panade—that's the mixture of starch and liquid often added to a meatball mixture to keep them tender. Then follow your favorite meatball (or meatless-ball!) recipe, subbing your stuffing-panade mixture for any bread or breadcrumbs in the recipe. Use up leftovers and fast-track your way to super flavorful, perfectly moist meatballs. Note: you could use the same tactic for a Thanksgiving meatloaf. If you glaze with cranberry sauce instead of ketchup, you get extra credit.

Hoping to knock out a bunch of your leftovers in one dish? Bake them all into a Thanksgiving shepherd's pie or pot pie. In a casserole dish, layer leftover turkey, stuffing, and veggies, being sure to dress with ample gravy and cranberry sauce between layers. Top with leftover mashed potatoes for a shepherd's pie, or use that pie crust you made and forgot about during the Thanksgiving madness for a pot pie, and bake. Marvel in how it's possible to cram all the flavors of turkey day into one bite.

The fat from sausage in this DIY pork-sage stuffing helps keep the casserole moist, even days into leftovers.

When it comes to satisfying cravings, arancini-style stuffing balls will do the trick. Roll hunks of leftover stuffing into balls using your hands or an ice cream scoop, then dip in flour, egg wash, and panko or Italian breadcrumbs. Shallow fry in neutral oil and serve with warm gravy.

Whether it's a leisurely morning breakfast or a midnight snack, you can't beat a quesadilla. Crumble leftover stuffing onto a tortilla, then layer with pieces of turkey, dot cranberry sauce over the surface, and definitely don't forget the shredded cheese (I like sharp cheddar or Oaxaca cheese here.) Top with another tortilla and fry in a little neutral oil until golden brown.

Thanksgiving nachos: a slight deviation from quesadillas, but with similar late-night snacking vibes. Spread tortilla or potato chips in an even layer on a sheet pan, and top with shredded cheese. Top them with shredded leftover turkey breast, crumbled stuffing, and drizzle the whole thing with gravy. Broil for a few minutes, or until the cheese melts. I promise they're as delicious at 2 a.m. as they are at 2 p.m.

Ditch the traditional celery-herb stuffing for a recipe like this chorizo version. The oft-overlooked mushrooms make for a super moist, flavor-packed stuffing.

Fold chopped leftover turkey, bacon, or ham into leftover stuffing along with chopped fresh herbs, a little grated Parmesan cheese, and a generous splash of chicken or turkey stock. Stuff a tablespoon or so of this filling into dumpling wrappers, and steam or pan-fry for an inventive, satisfying spin on Thanksgiving flavors that's just begging for a dip in cranberry sauce.

Shred half a cup of your favorite bacon-friendly cheese (also known as "any cheese") and add to two cups of stuffing, along with a beaten egg and a splash of stock. Form this mixture into balls about the size of a ping pong ball, then wrap a slice of bacon around each one, secure carefully through the middle with a toothpick, and transfer to a baking sheet. Bake at 375°F for about 20 minutes, or until bacon is crisp and stuffing bites are golden-brown, and serve hot out of the oven with cranberry mustard for dipping.

This is a great way to repurpose any kind of cornbread stuffing (but especially the sausage-studded, jalapeño-spiked variety). Stir a big handful of coarsely shredded sharp cheddar and a small amount of stock if necessary, and form into golf ball-sized balls. You can also use a scoop for uniform results. Roll in beaten egg, then in breadcrumbs or cornmeal, and shallow or deep-fry until golden-brown. Dips-wise, you know what to do.