One writer's unexpected contribution to her family's culinary inheritance 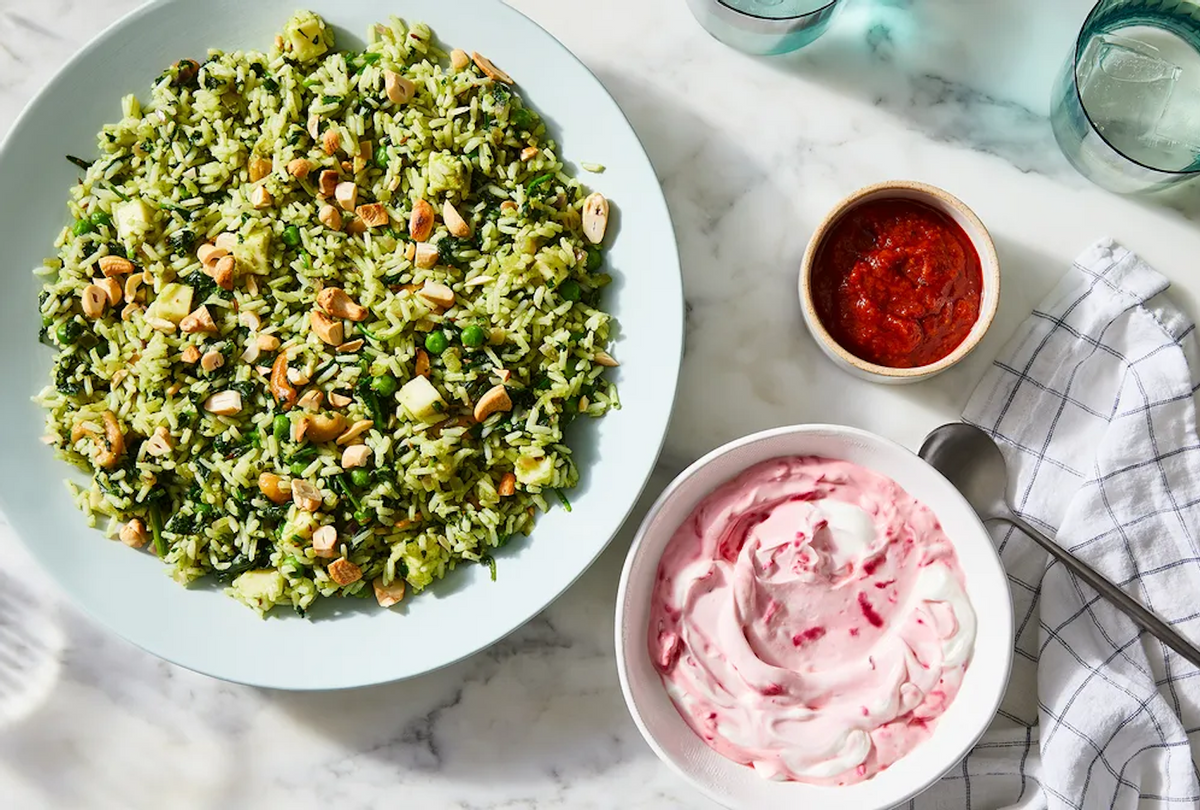 I started a pandemic kitchen notebook in April 2020, three weeks into California's first lockdown. "What We Ate in Covid Quarantine," I wrote on the inaugural page, adding a jaunty swoosh under the title. Each day, I'd record our meals: cobbled-together leftover lunches, mother-son baking adventures, ambitious holiday projects, and obligatory sourdough experiments.

My notebook was meant to be a temporary artifact, an amusing chronicle to look back on once life returned to normal in a few months. But somehow, almost incomprehensibly, a year came and went, and I was still recording what we were cooking and eating. The notebook had become part of my daily routine, a familiar anchor in an uncertain time.

Flipping through its pages now reveals, among other things, my family's wild, varied, voracious appetite. It also tells me that there are some firm favorites in our household. Exhibit A: Spinach rice. I see it appear in my impatient scrawl over and over, at least every other week. My kids would say it's one of my signature dishes, and they're probably right. But thinking of its origins always makes me smile.

I grew up in Chennai, the land of keerai masiyal, the mashed spinach tempered with red chile and mustard seeds that is a mainstay of the average Tamilian's diet. To my childhood self, it was the south Indian equivalent of green peas from the classic American TV dinner: the prerequisite something-green on the plate, the unpopular party guest somehow included on every guest list.

It was only once I turned 22, moved continents to North America, and began cooking for myself that I realized how multifaceted spinach could be. Residual memories of keerai masiyal still lingered, but I couldn't help noticing how often hosts on the Food Network — an entire TV channel devoted to cooking, a revelation for this new immigrant! — reached for spinach to add heft, texture, and flavor to a range of dishes. In just minutes, it seemed, you could turn a few ounces of tender green leaves into the base for a vibrant salad, a speedy side wilted down with garlic and cumin, or a punchy pasta filling when combined with ricotta and lemon. I was smitten.

These days, finding a bag of prewashed spinach in our refrigerator is still pretty much guaranteed. And while I'm happy to throw a handful of it into everything from pasta to casseroles and quesadillas, odds are that sooner rather than later, I'm adding it to rice.

My mother-in-law taught me the recipe for spinach rice 15 years ago, when my husband and I were still in the somewhat-newlywed stage. At the time, I worked as a fifth-grade teacher, and we lived in a small one-bedroom apartment just outside San Francisco. It was a June afternoon, summer break just a few days away. This meant it was teacher gifting season, that endearing time of year when students troop into the classroom with tokens of appreciation, handwritten notes, and homemade treats. I was squatting on the floor methodically inventorying my bounty to help streamline thank-you-card writing when my mother-in-law, who was visiting from Chennai, beckoned me over to our galley kitchen.

"Let me make dinner today," she said. "I think you'll really like this rice. Help me get started?" She handed me a red onion to chop.

I come from a long line of accomplished, passionate home cooks. Things many Tamilian families would gladly buy at a store — pickles, masala podis, snacks, time-consuming desserts — were prepared by my mother and grandmother at home, from scratch. Their marble-floored kitchen was a workhorse, with three stoves, open shelving, and two ceiling fans to keep the hot Chennai air moving. The bulk of their day was spent in meal planning, preparation, and consumption. I arrived at married life a culinary novice, but I was armed with a notebook full of recipes from three generations of the Sreenivas family and a pantry full of spice blends flown in from my mother's kitchen.

The trouble was: I had barely put a dent in these supplies. My first few years in the States had been a whirlwind of trying new cuisines, and I was enamored by the ingredients and possibilities suddenly afforded to me. Traditional south Indian food was something I craved now and then, but it was also time-consuming and mercurial, so I devoted my energy elsewhere.

My mother-in-law, much like my mother, was a fantastic cook. Her specialty was the food of our heritage: Her rasam and vetha kozhambu were legendary. She could sense my trepidation around these dishes, my fears that my attempts would never quite measure up. And so, on her visits, we stayed in our lanes. She'd cook lunch, usually traditional Tamil food, and I'd make dinner, each meal a foray into food cultures or flavor profiles she found novel and exciting.

This was what made my mother-in-law's seemingly small gesture that June afternoon feel so significant. It was the first time I was going to learn a recipe from her. We could both see this occasion for what it was: a hand outstretched, a culinary drawbridge lowered.

The recipe was straightforward enough, but it had a few surprises built in. After tipping the red onion I'd just chopped into the pan, the next set of ingredients was a blend of cilantro, fresh coconut, green chile, and lemon juice, something that resembled a traditional Indian chutney. When this purée hit the hot oil, the entire apartment filled with the most enticing aroma: bright and verdant, but with the rounded notes that would ultimately become the backbone of the entire dish.

By the time my mother-in-law added a pile of chopped spinach leaves, my mouth was watering. "So that's the entire mixture, right? Can we add the rice yet?"

She laughed. "Be patient. Look at the spinach: It's wilted but still too wet. It'll show you when it's ready."

Dinner that night was a runaway success. The flavors felt simultaneously familiar and new, and I knew immediately it was a recipe I'd return to.

It would be a couple of months before I made spinach rice on my own. I had fretted that the results would somehow not live up to the memories, but my mother-in-law had been right: The spinach showed me when it was ready. Emboldened, I began to play around, adding new ingredients to the original: crisp cubes of potato, tiny bits of paneer, roasted cashew, a handful of corn or peas, a finishing touch of homemade croutons.

As much as it can be dressed up for a more festive menu, spinach rice needs little more than raita to complete a weeknight meal. I started with the most obvious suspect: a mixed vegetable raita, a true Indian classic. A version with grated carrots and cilantro came next, inching closer to rightness but still somehow lacking. I dumped a bag of boondi (savory pearls of fried chickpea flour) into whisked yogurt along with some chopped scallions, which felt like an acceptable placeholder as I continued to experiment.

A few years into tinkering, I finally got my answer. Of all the raitas that could serve as an accompaniment, one made with beets was the clear standout. The sweet undertones of the beets perfectly complemented the herbaceous rice. Chaat masala offered just the right lift. The fact that the colors looked beautiful together on the plate didn't hurt either.

Spinach rice became my standard contribution to potlucks, initially because I wanted to share a dish we loved as a family, and later by popular demand. It always worked, gaining fans with its combination of punchy flavor and straightforward preparation. I held impromptu cooking demonstrations in our California kitchen and emailed the instructions to friends. During one of her visits from Chennai, my mother, newly enamored by the rice, asked for the recipe. It was the first one she had ever asked me for, a unique reversal of our roles as teacher and student.

It's hard to pinpoint the exact moment when the stewardship of this dish changed hands, when it stopped being my husband's mother's dish and became mine. But a decade after teaching me, in a surprising full-circle twist, I was on the phone with my mother-in-law when she asked for the recipe. She now associated spinach rice with me, she said, and no longer remembered the exact proportions she had used. Besides, she added, my preparation was an improvement on the dish of her memory. Somehow, in embracing her dish so completely, I had adopted it as my own, paying the best kind of homage to my mother-in-law.

We've moved homes many times since the day I first learned to make spinach rice. It's traveled with me wherever I go, and become one of those dishes that will always taste most like home. On days when I don't have the energy for creativity or exertion in the kitchen but want something that fills hearts and bellies, I automatically reach for the bag of spinach and the beet I know will be waiting in the crisper drawer. I set a pan of basmati rice to cook, and my shoulders immediately relax. My body knows the way from here.