For the fudgiest brownies, skip the flour

Thanks to the walnuts' buttery fat and zero gluten, the result is rich, crackly, and halfway to chocolate ganache 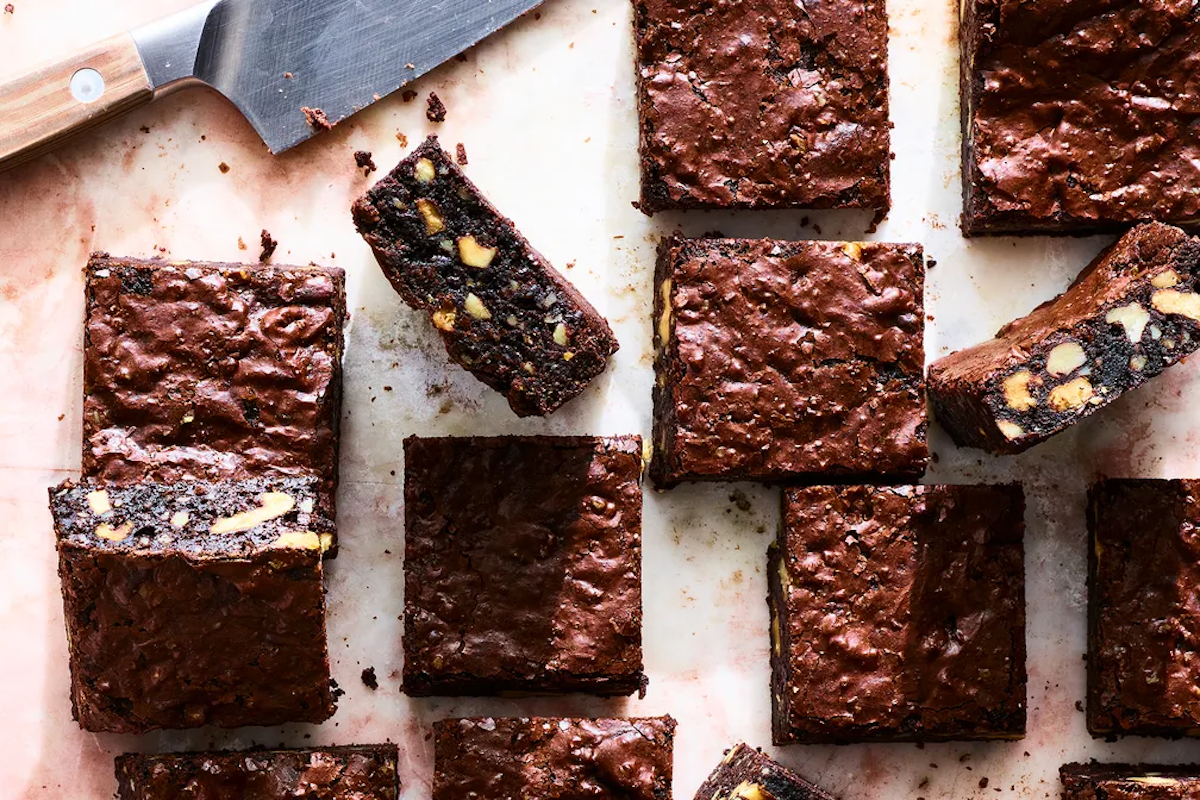 Big Little Recipe has the smallest-possible ingredient list and big everything else: flavor, creativity, wow factor. That means five ingredients or fewer — not including water, salt, black pepper, and certain fats (like oil and butter), since we're guessing you have those covered. This week, we're sharing a sweet treat from the Big Little Recipes cookbook, which is out now (blasts airhorn, throws confetti in the air).

Flour is the difference between a fudgy and cakey brownie — the more flour you add, the cakier it gets. So what would happen if you didn't add any flour at all?

As with many existential questions, the answer is not an answer, but instead, another question: What is flour, anyway? Unravel this and you will be rewarded with the fudgiest brownies known to mankind.

According to Britannica, "In modern usage, the word flour alone usually refers to wheat flour, the major type in Western countries." In the original "Joy of Cooking," published in 1931, flour was called just that — "flour." It was only in later editions that "all-purpose" became an expected adjective, as is the norm nowadays in food publishing.

Beyond all-purpose, there is cake, bread, whole-wheat, and white-whole-wheat, to name just a few. And then there are all the not-wheat flours, from potato to quinoa to chickpea to almond. In this handy volume conversion chart from King Arthur, there are 49 different varieties.

This breadth has yielded a category of cookbooks in itself. In 2014, Alice Medrich published "Flavor Flours," which celebrated buckwheat, teff, oat flour, and more, and went on to win a James Beard Award. And this year alone, Roxana Jullapat's "Mother Grains," Abra Berens' "Grist," and Jennifer Lapidus' "Southern Ground" all illustrate the spectrum of flours.

Which brings me to the term flourless. Because if flour can mean anything, what the heck does flourless mean? Growing up in a Jewish family, this word popped up at Passover every year, when Flourless Chocolate Cake was a favorite way to comply with kosher rules around the holiday. In this case, the understanding is no wheat flour (and lots of whipped cream to pile on top).

These delightful brownies follow suit. There is no wheat flour, but, if you want to get technical about it, there is another sort of flour — one we'll make ourselves, in a matter of minutes, using an ingredient that many brownie recipes already call for: walnuts.

Some get roasted, for toasty flavor, and stirred into the batter. The rest are left raw, for a wheat-ish subtleness, and whooshed in a food processor until powdery. Thanks to the nuts' buttery fat and zero gluten, the result is rich, crackly, and halfway to chocolate ganache.