They're not easy nor fast, but definitely worth your while 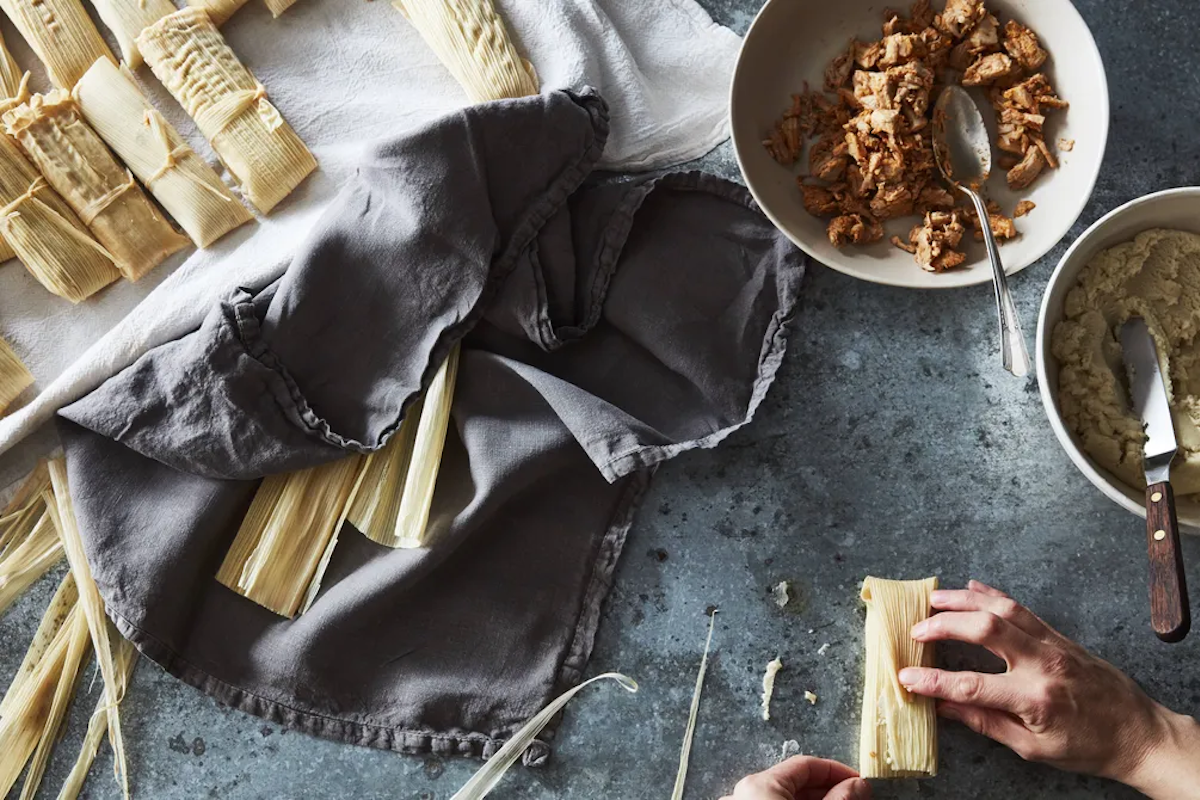 I've always wanted to learn to make pork tamales. So when I had the opportunity to cook with my wonderful friend Janet, I asked her if she would show me how they are made in her home country of Mexico. Before we started, she warned me that pork tamales are a labor of love: While certainly not a quick dish, they would be worth the work, she ensured me.

Many countries have their own version of pork tamales. Even in Mexico, tamales vary from place to place, family to family: Some wrap their pork tamales with corn husks, while others use banana leaves. Janet told me that where she is from in northern Mexico, corn husks are the preferred cooking sleeve, and she feels that they yield a tender, softer exterior. The fillings for tamales, too, are matter of preference. Some like to add refried beans or chicken to the masa dough, but for Janet's family, the favorite is slow-cooked pork flavored with ancho chile. (And she uses any leftover pork to make tostadas or fill tacos).

How to make pork tamales

To make the filling for Janet's pork tamales, you'll need three pounds of pork butt, white onion, ancho chiles, water, and salt and pepper. Despite the lean list of ingredients, they're incredibly flavorful. The meat is juicy and succulent and the chiles bring heat (which can be offset by the fresh-tasting salsa verde).

The pork is cooked in a large pot with water and onions. After it's cooked, save the cooking water! The water has become a simple but spectacular pork stock that can then be used for making the masa.

Because the pork simmers for three hours, Janet makes it the day before. With the pork shredded and flavored ahead of time, she can focus on making the masa dough and assembling the tamales.

How to make masa

Making the masa is a bit time consuming — but very important. Janet told me that in Mexico, you can go to the mill to pick up freshly ground masa, which is softer and fresher than what we purchase in the grocery store here. In the States, she prefers to buy "instant" masa, as she feels it has the closest flavor to what she was able to buy back home.

To make the masa, Janet shows me how to combine refined lard with baking powder in a stand mixer. The two are mixed for at least 10 minutes until they're thoroughly combined. Next, the instant masa, reserved pork broth, and salt are added to a separate bowl with the baking powder-lard mixture . . . and this is where things get messy. Janet mixes this all by hand until a sticky dough forms. If the dough is too dry, you can add a little more pork broth; if it's really unbearably sticky, add another sprinkle of instant masa. Turn the stand mixer back on low speed and slowly add small amounts of the hand-mixed dough back into an empty bowl. Mix this once more for another few minutes until a paste-like consistency is formed.

How to assemble pork tamales

Once the masa is ready, she lays the pliable husk in her hand, using her palm as a base, and spreads the masa up and down. She wants the masa to be thin enough that she can put a generous helping of pork filling down in the middle. Then, she expertly folds it up and ties it with a bow made of corn husk. In Mexico, she would make a simple tie on the pork tamales and a bow on the bean tamales so that her guests would always know what they were going to find inside.

When she's ready to cook, Janet lines the steamer basket with broken pieces of corn husks before nestling in the tamales — the steam will heat the husks before the tamales, which prevents against soggy bottoms. Then, she places a plastic bag over the top of the tamales to catch the condensation (another moisture protection device), followed by a dish towel and, finally, the top of the pot.

Then, it's just a matter of waiting two hours — one hour for the pork tamales to steam, and one hour for them to hang out in the steamer with the heat off. Janet covers the finished tamales with homemade salsa verde made with tomatillos, onions, and cilantro. Food52 co-founder Amanda Hesser likes to make her salsa verde with parsley, capers, anchovy fillets, garlic, onion, and lots of olive oil. She simply combines everything in a bowl and serves it in the exact same vessel. The combination of the savory pork, soft corn masa, and fresh salsa verde makes all of the labor worthwhile.

You can make the pork tamales ahead of time, too: Freeze them, steamed or un-steamed, in a plastic bag for up to a month. Defrost the pork tamales before steaming or, if they've already been cooked, defrost them in the microwave on a dish wrapped in Saran Wrap for two to three minutes.