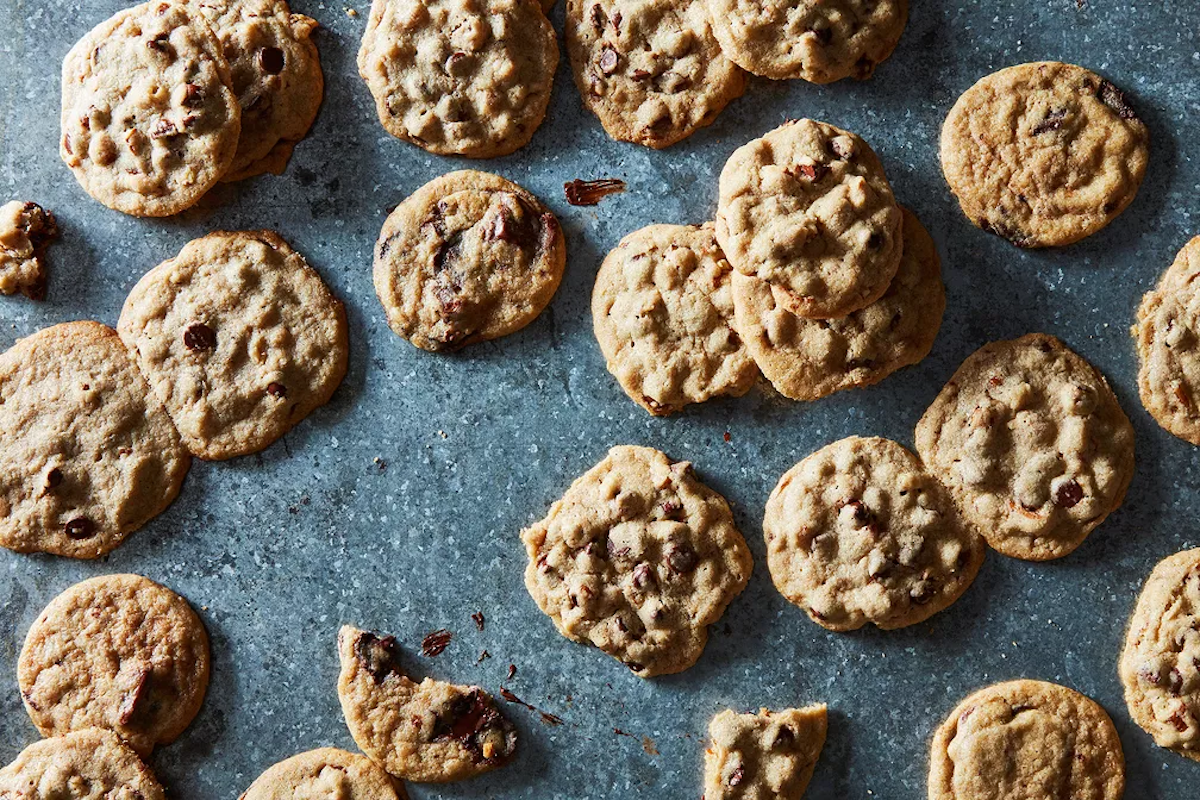 Greenspan knows a thing or two about the art of the cookie. With the publication of her newest cookbook, "Baking With Dorie: Sweet, Salty & Simple," this fall — which itself includes 10 chocolate chip cookie recipes, as well as a primer on ingredients and techniques for optimal chocolate chip cookie baking — she'll have written, developed, and published 28 distinct recipes for chocolate chip cookies across a total of 14 cookbooks.

As Stella Parks notes in her history of the chocolate chip cookie in her book "Bravetart," chocolate became less expensive in the 19th century, leading to a slew of recipes for "jumble" cookies with bits of chocolate in the dough. Ruth Wakefield's 1938 recipe for chocolate chip cookies, in the fourth edition of "Toll House Tried and True Recipes," uses the exact ratio of butter, sugar, flour, and chocolate established by the jumble cookies, but also contained half as many eggs and a 50:50 blend of white and brown sugar, giving the cookies a crunch and a butterscotch flavor. Wakefield's recipe allowed her to build upon her existing partnership with Nestlé, which in turn allowed the Swiss company to enter the American market.

In terms of Greenspan's chocolate chip cookie anthology, what comes first is Greenspan and Pierre Hermé's recipe for her cult classic World Peace Cookies, published in her 2002 cookbook "Paris Sweets." (Greenspan's earlier books — "Sweet Times: Simple Desserts for Every Occasion," "Desserts by Pierre Hermé," "Baking with Julia: Savor the Joys of Baking with America's Best Bakers" — were full of desserts, but no chocolate chip cookies.)

Hermé had created the cookie for Korova, a now-closed Parisian restaurant. At its core it's a chocolate sablé, a French shortbread cookie — but unlike a sablé, it's chewy, with roots in the standard chocolate chip cookie. The cookies were known as Sablés Chocolats, but according to Greenspan, her neighbor, convinced that if everyone in the world could taste the decadent, intensely chocolatey, and texturally rich cookies, there would be peace on earth, one day gave the cookies their nickname.

They exploded in popularity. If you google "World Peace Cookie," you'll be met with countless home and professional bakers' odes to the cookie, along with their own takes on the original recipe. To this day, it remains the recipe Greenspan is most famous for.

"When Pierre talked to me 20-some years ago about the World Peace Cookie, he showed me the recipe and I noticed it had brown sugar in it, and that surprised me. It wasn't a common sugar for a French cookie," Greenspan told me. "At that point, and even now, if you say the word 'cookie' to a French person, to them, the translation is American chocolate chip cookie. Pierre said to me, 'I was thinking of the Toll House cookie.'"

Instead of starting from scratch with each new recipe, Greenspan builds on existing recipes in her cookie war chest. "I no longer start from zero, at this point in my baking life," she said. "I go back to what I've done and I play with them. Sometimes what I end up with doesn't really resemble what I've started with."

Greenspan's Two-Bite One Chip Cookies, which yield 60 cookies per batch, are cookies as small as a thumbprint, and they have more flour than a typical chocolate chip cookie, so they bake into little domes. Each cookie is made by molding a bit of dough around a single chocolate chip, making it the rare Greenspan chocolate chip cookie recipe where it's better to use a chocolate chip than chopped, high-quality chocolate.

Her Crash-O-Cookies, named for family friend and artist John "Crash" Matos, is a twist on an oatmeal raisin cookie, studded with milk chocolate bits. And the handful of sablé recipes in "Dorie's Cookies" build upon the traditional French base of the cookie, but include twists like lavender and white chocolate, or espresso.

"A super great cookie has a play of texture," she said. "You've got some crispiness and you've got some chewy, bendy parts. You've got the chocolate intermittently, so every bite is different. And salt."

This blend of elements is present in the only cookie recipe in 2018's "Everyday Dorie," which introduced readers to Dorie's Chewy Chocolate Chip Cookies. Unlike her other, more textbook chocolate chip cookies, these incorporate rolled oats and cinnamon, adding body and warmth.

Iterating with spice, texture, crunch, new additions, and size, the recipes take what we love so much about chocolate chip cookies — the rich caramel notes of the brown sugar, the crunch and the chewiness of the dough, the pools of chocolate — and deliver something that manages to be both new and exciting, and deeply familiar.

That's why Greenspan just can't help but keep coming up with new chocolate chip cookie recipes. "I can't stop tinkering with it," she said. "I love the form of it. I love the idea of it." The recipe development is as enjoyable as the cookies themselves.