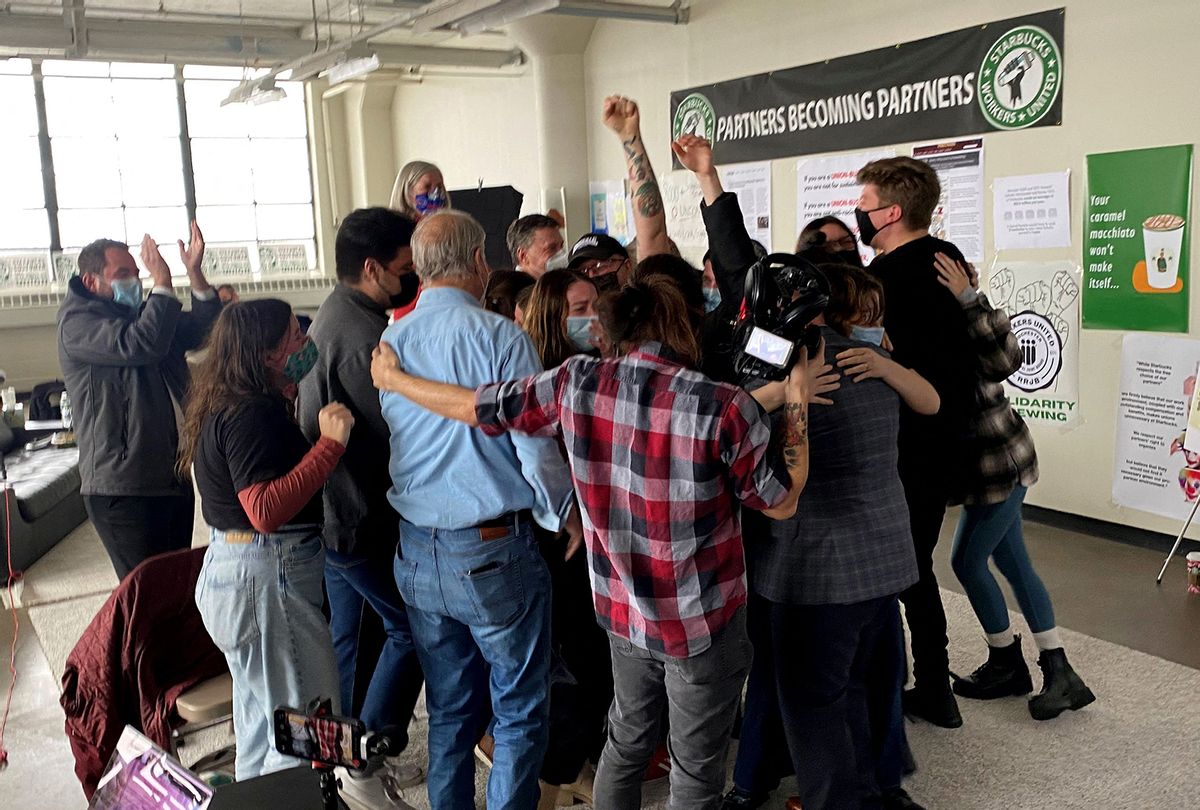 Employees at the Elmwood Avenue location of Starbucks in Buffalo, New York celebrated Thursday as they became the first U.S. employees of the international coffee chain to unionize, with a decisive margin of victory.

Nineteen workers voted in favor of forming a union while eight voted against, according to a tally by the National Labor Relations Board (NLRB). The store's results were the first to be announced as more than 100 votes from three Buffalo-area Starbucks were counted on Thursday afternoon.

"History made!" tweeted Starbucks Workers United, the group of employees who are working to unionize for fairer pay and working conditions.

According to Rep. Chuy Garcia (D-Ill.), the development is "a major win for the labor movement. During the pandemic we saw record-breaking profits go to corporations while workers were left behind. Workers are saying enough is enough, and when unions fight, workers win."

The fight to unionize at Starbucks has gained national attention in recent weeks, with Sens. Bernie Sanders (I-Vt.) and Kirsten Gillibrand (D-N.Y.) meeting with the workers.

Since employees at the three stores filed for a union election with the NLRB in August, their efforts have also garnered attention from the corporation, which reported a record $29 billion in profits in its 2021 fiscal year.

HuffPost reporter Dave Jamieson reported around 2:30 pm Eastern time on Thursday that the second store, located on Camp Road, had voted against forming a union, with eight people supporting the move, 12 opposing, and two challenged ballots.

Sanders congratulated the Elmwood employees on "the HISTORIC achievement of organizing the first-ever union at a company-owned Starbucks in the U.S." and called on the company to "stop pouring money into the fight against the union and negotiate a fair contract now."

Progressive media organization More Perfect Union reported that the votes at a third Buffalo-area store were in, with 15 people voting to unionize and nine people opposing unionization.

"Seven additional ballots were challenged and will be opened later, but a source close to the union is confident that these ballots will not change the final outcome," More Perfect Union said.

According to KOIN, a local CBS affiliate, the seven challenged ballots at the third store, located on Genesee Street in Cheektowaga, "will need to be resolved at an upcoming post-election proceeding with the NLRB."

Every challenged ballot will have to be opposed to unionizing in order for the change the final outcome, ABC affiliate WKBW reported.

More Perfect Union also noted that the Camp Road store, which voted against unionizing, "was targeted by Starbucks union-busters more than any other store."

Workers at Camp Road will reportedly raise objections to the results with the NLRB.