There is a national student movement underway: Why kids across the country are walking out 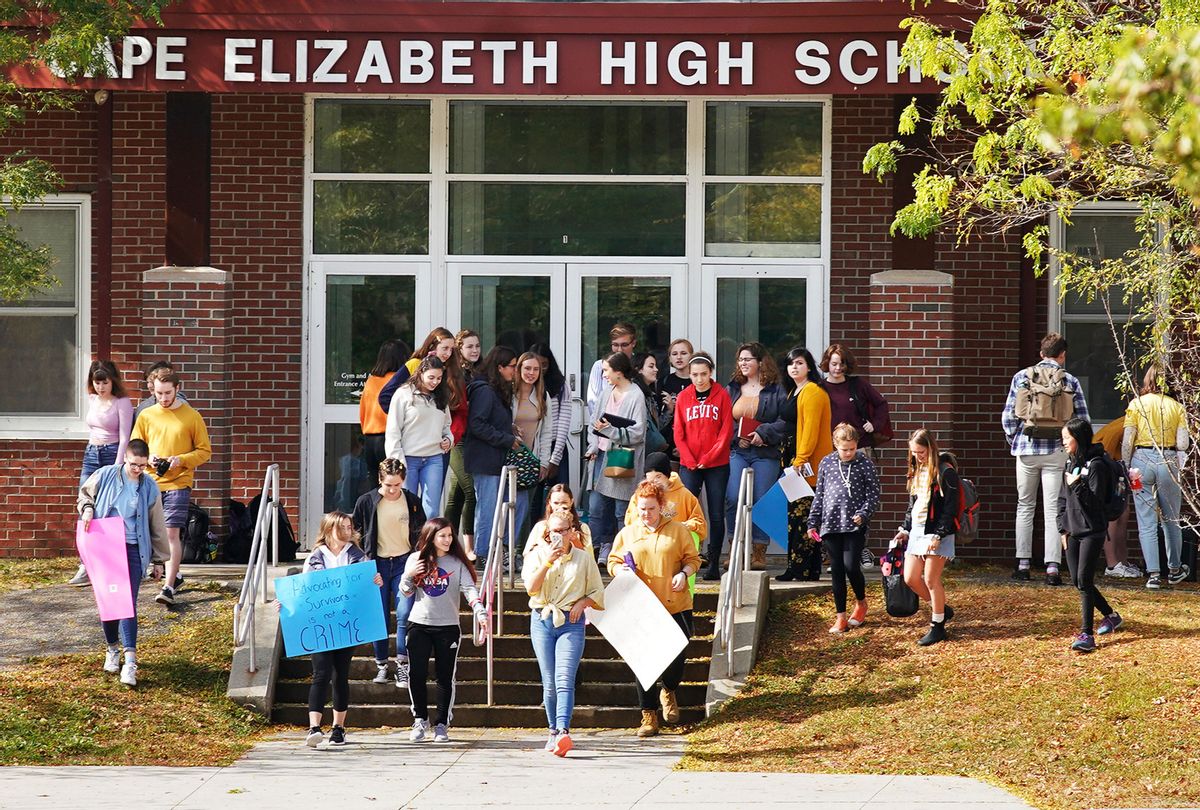 Students from Cape Elizabeth High School walked out of school on Monday, October 7, 2019 to protest the suspension of students who have been suspended from school following complaints of how the school handled recent sexual assault allegations. (Gregory Rec/Portland Press Herald via Getty Images)
--

After more than a year of virtual classes for most students, schools across the country implemented strategic plans to ensure students' safety in the midst of the COVID-19 pandemic: masking up, getting regular COVID tests, maintaining social distancing and encouraging students to stay home if they're not feeling well. But 2021 has seen school administrations across the country facing an unexpected new challenge: large-scale student walkouts.

From Kent State to 2018's National School Walkout for gun control following the Marjory Stoneman Douglas High School shooting in Florida, students have long sacrificed class time to take a stand and demand policy reform. In recent months, high school students – and even some middle schoolers – have been leaving class to call attention to their school's mishandling of sexual assault reports.

Students from nearly 30 schools across the country have held walkouts, sometimes forming crowds of hundreds of students, to speak out against sexual assault on campus and their adminstrations' handling of these issues. There is no indication that the effort is coordinated across campuses.

Hundreds of students at Cambridge Rindge and Latin School in Boston, Massachusetts walked out on Nov. 30 to protest both campus sexual assault and their school's silence on the issue. One student, Elena Serpas, a high school junior who participated in the walkout, submitted a letter to The Boston Globe, after noting that much of the local news coverage focused on the perspectives of the adults affected.

"It shows that there is a cultural lack of concern for addressing young people's needs," Serpas told Salon. At the walkout, students spoke out about the pain, trauma and isolation caused by sexual assault, as well as how these concerns are often brushed aside by administrators. But, according to Serpas, it's about time that adults start paying attention to what young people are saying. "It all comes back to listening to youth; listening to them, their voices and their needs," she said. "And when it comes to a topic like sexual assault, that means listening. Really listening."

While the subject of consent, accountability and reporting of sexual harassment have been at the forefront of public safety conversations at the college level, the same attention has not been seen in middle and high schools — until now.

"All the work that's been done on college campuses, all the work that's been done to open up the space with the MeToo movement, has allowed kids to see themselves as a generation that is not accepting this anymore," said Shael Norris, the Executive Director of SafeBAE, a youth survivor-led organization committed to addressing issues of sexual assault and rape culture in middle and high schools. The group has organized local chapters, school visits and has provided free educational resources, modules and other content since 2016. According to Norris, these protests have been a long time coming.

At John H. Guyer High School in Denton, Texas hundreds of students left class at 10:00 am on Oct. 15. Holding signs that read, "Hold Him Accountable" and "We Believe You." The teenagers protested the school's handling of an alleged sexual assault. Less than two weeks later, students at Loudon County Public Schools in Loudon, Virginia planned their own walkout. They called for safer schools after reports of two sexual assaults that occurred at two different schools within the district.

"What we have found is schools do a really poor job of holding perpetrators accountable for sexual misconduct in schools – both within the K-12 as well as the higher education setting," explained Tracey Vitchers, the Executive Director of It's On Us, a nonprofit founded in 2014 under the Obama Administration to combat sexual assault on college campuses. "Typically the number of students who are suspended or expelled is zero or one, over the course of many years of complaints being filed."

At Hawthorne Academy of Health Sciences in Charlotte, North Carolina, a student was suspended for reporting a sexual assault on campus. The school concluded that the 15-year-old student had falsified the report, while the perpetrator – who had been previously accused of sexual misconduct – was allowed to remain on campus. The alleged victim was also required to take a sexual assault prevention course. There is now a request that the Department of Education open an investigation into Charlotte-Mecklenburg Schools' Title IX policies.

Title IX, which was created in the 1970s, prohibits any form of sex discrimination in educational institutions that receive federal funding – essentially all public schools and most higher education. The legislation is also meant to ensure that schools have a legal obligation to "respond and remedy hostile education environments." This not only includes a thorough investigation into reports of sexual harassment and violence, but allowing the victim to re-take any examinations they had to take on the day of the assault, and being able to change classes and schedules so as to be able to avoid seeing their assaulter.

Schools risk losing their federal funding for not following these directives under Title IX. But that risk has not spurred schools to action.

Just before the pandemic closed down schools in early 2020, students at Berkeley High in California held a walkout in protest of sexual assault and the lack of resources available to them. However, upon their return to campus over a year later, students continue to see little support for the Title IX office and teachers deficient in appropriate training to handle complaints of sexual assault.

For the past several months, students at schools across the California Bay Area have been organizing to call attention to their schools' weak policies around sexual assault. At Ruth Asawa School of the Arts in San Francisco, students walked out of class to protest lax punishments for those who commit sexual assault. And at the Oakland Technical High School, students marched two miles to rally outside of the Oakland Unified School District's central office, calling for strengthened policies around sexual assault. Oakland School for the Arts and Bishop O'Dowd High School, a private Catholic school, also saw similar actions carried out by students to demand more resources for survivors and pressure administrators to handle sexual assault more seriously just this last semester.

But not all schools have been tolerant of the protests, suspending students who participate in the walkouts and calling on local police departments to be present during the demonstrations.

A planned walkout at Little Elm High School in Texas recently turned violent when four students were accused of assaulting police officers. Videos circulating on social media showing officers dragging students by their shirts and using tasers and sprays on them.

Still, even younger students are now getting involved in the walkouts.

In Portland, Oregon, Roseway Heights Middle School, students walked out in protest of the school's response to sexual violence on campus. According to Oregon Public Broadcasting, students have reported scores of inappropriate sexual behavior, including being touched, grabbed, or punched by their classmates, as well as being catcalled or called inappropriate names – all of which fall under Title IX's umbrella term: "sexual harassment." Many of the students are under 13 years of age.

According to studies conducted by the Department of Education, sexual assault is most prevalent among adolescents than in any other group. Moreover, schools are reported as the most common location for sexual harassment to occur among this age group. The data also shows that 51% of high school girls and 26% of high school boys have experienced "adolescent peer-on-peer sexual assault victimization." And nearly half of U.S. students are subject to sexual harassment or assault at school before they graduate high school: 56% of girls and 40% boys.

What makes the recent walkouts against sexual assault different is that students aren't necessarily calling for national change. Instead, they want their own schools to be safer places, free from pervasive sexual assault and harassment. And they are calling from administrations to carry out their supposedly obligatory Title IX duties.

But for Vitchers, a lack of appropriate sexual education, funding and access are a major factor in administrations' inability – or disinterest – in appropriately addressing these cases.

"Resources are often lacking when it comes to issues of sexual misconduct in the K-12 setting, particularly in middle and high school," she explained. "I think the protests that we are seeing happening nationwide are a result of that lack of infrastructure within school districts to address sexual assault prevention, education and survivor support head on."

The impact of these protests, according to Norris, will be "absolutely, cataclysmic change."

"More and more kids are going to start to demand better of their schools."