The mythical history of mincemeat pies

Where the "meat" went, once and for all 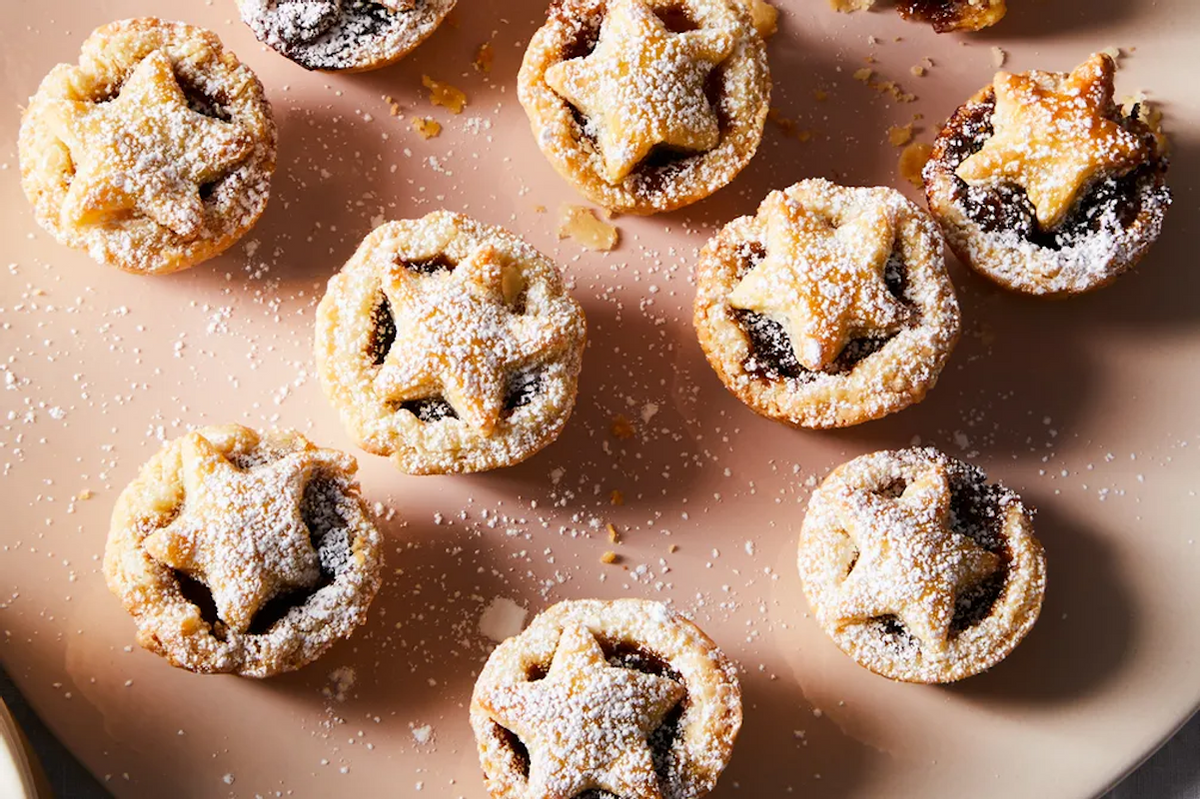 If you happen to be British, then mince pies are a non-negotiable part of the holidays.As a nation we buy around 370 million of them every December, and goodness only knows how many we bake ourselves. If my family's anything to go by, it's a lot. Last year, my mum and I managed 250 mince pies for a church coffee morning, and I'd guestimate that my Aunty Christine and my mother-in-law Sheana were baking at a similar rate.

Little wonder, then, that to me mince pies feel integral to the holidays. I imagine Mary and Joseph sitting round the manger, offering a freshly baked plate of the Christmas pie to the visiting shepherds. In fact, this fanciful notion is not as far from the truth as you might guess. Mince pies have culinary roots that go back, deep into the mists of time. "Shrid pie" has evolved over thousands of years, from a pie made with spiced minced meat, to the dried fruit "mincemeat" that we know and love.

Yes, meat. Literal meat. And lots of it too. In comparison to the treats we're used to today, this seems perversely strange. But let's step away from the afternoon tea tray, and instead, imagine something more like Moroccan pastilla, the pigeon or rabbit filo pie studded with almonds, scented with cinnamon, and dusted with powdered sugar. Variations on pies like this were popular all over the Middle East, down into Ancient Egypt, across to Greece (get in there, spinach and golden raisins) and all the way to pre-Christian Rome, where spiced, sweet meat pies were an integral part of Saturnalia celebrations. Early mince pies fit clearly into this culinary lineage. But how has this traditional Christmas pie developed over time?

Over the years, recipes have called for mutton, goose, and beef tongue. Even in the beginning of the 20th century, cooks relying on the popular "Mrs. Beeton" cookbook (published in 1861) included plenty of meat in their pies. Only in the last 50 years or so has suet stood in for meat, and only in the last decade has vegetarian suet become the default for commercially produced products.

One of the oldest English cookbooks, "The Forme of Cury" (circa 1390) contains a recipe for a gloriously meaty mince pie. The "Tartes of Flesh" contains stewed birds and rabbits, as well as ground boiled pork ("hewe hem to smale gobbetes," the recipe commands). The mixture is flavored with cheese as well as "gode powdours and hool spices, sugur, and saffron." A recipe from "Elinor Fettiplace's Receipt Book" (1609), suggests equal parts minced lamb, beef suet, currants and raisins, and flavorings include ginger, mace nutmeg, cinnamon, orange peel, and sugar. Not a lot of sugar, however, as this was still the most expensive of luxuries. But as sugar became cheaper (with plentiful imports from the West Indies), mince pies became sweeter and recipes adapted to meet this new possibility.

In the brilliantly (but misogynistically) titled "The English Huswife, Containing the Inward and Outward Virtues Which Ought to Be in a Complete Woman" (1615), written by Gervase Markham (a man, of course), there's a recipe that describes mincing "the best flesh from the bone" of mutton before flavoring the mixture with a range of spices that feels familiar to the canon today: clove, mace, pepper, and orange peel.

In fact, these classic Spice Road flavors are what imbued mince pies with an almost mythical significance. Especially after the Crusades, when soldiers returned from Jerusalem having experienced tastes far beyond what they would have been used to in their English villages. You could even draw a connection to the journey of the Magi who followed a star from the East to bring gifts to the baby Jesus. Echoes of that connection still exist today: Ever wonder why so many mince pies today are decorated with stars?

The symbolism of stars

The expense of these spices meant that mince pies were a special-occasion food. They were made as part of the Twelve Days of Christmas feasting, richly decorated with cut-out pastry, elaborately shaped, and dressed to impress. Over time, they gained in symbolism: 13 key spices and flavorings were said to represent Jesus and the 12 disciples; 12 dried plums were added to the mixture, one for each apostle; the citrus rind was said to symbolize the bitterness of the crucifixion, the sweetness of the dried fruits, the joy of the nativity.

All of this mythology was precisely not what Puritan revolutionary leader Oliver Cromwell had in mind when he became head of the UK's short-lived republic in 1653. Too idolatrous. Too Catholic. Though he stopped short of technically banning mince pies, he did strongly discourage them, and as a consequence the mince pie became (secretly, sneakily, rebelliously) even more popular. One of the first things that King Charles II did after the government fell and the monarchy was restored, was to officially rescind the unofficial ban. Mince pies, much to popular acclaim, were emphatically back.

In 1662, just two years after Charles II's decree, Samuel Pepys wrote about mince pies in his famous diary, "I sent for a mince pie abroad, my wife not being well to make any herself." Incidentally, this may well be the first recorded mention of a shop-bought mince pie, and the first shade of snobbery about them. It's clear that Peyps is relieved that Elizabeth is well, and his mince pie baking has returned in-house when he writes the following year, "I thank God, and at home found my wife making mince pies."

These are still very much pies on the savory side of the sweet-savory dichotomy. By 1845, Eliza Acton wrote two recipes for mince pies: one, the typical meat mince pie we've been seeing thus far, with one pound of tongue (!); and another, with a lot more sugar and dried fruits, but where the only nod to carnivores is suet. She calls it "superlative." Today we'd probably just call it "mincemeat." Thus, the style of mince pie that we know and love today began its meteoric rise.

How to make mincemeat pie

The filling for this traditional Christmas pie historically consisted of meat and fruit, specifically shredded beef suet or venison, but it has evolved to more ingredients overtime. In fact, those meaty versions haven't existed on most holiday tables since the 17th century. Nowadays, you'll find that the British staple is primarily a fruit pie filled to the brim with boozy dried fruit. Our modern-day recipe for mince pie is made with finely chopped dried fruit (think: dark raisins, currants, figs, apricots, and berries), which is cooked in brown sugar, orange juice, candied ginger, and an assortment of warm spices like cinnamon, cloves, allspice, and nutmeg, plus a little bit of cognac or brandy.

Once the fruit has rehydrated and the liquid has fully evaporated, transfer the mixture to an airtight container (ideally sterilized jars) and store in the refrigerator for at least one week, and up to one month. When you're ready to bake the pie, prepare and roll out your favorite pastry dough. Transfer it to one nine-inch pie dish or miniature pie dishes, add the homemade mincemeat filling, top with more pastry, and bake until the pastry is golden brown. They're best enjoyed when served warm with a dusting of powdered sugar, if you really want to go all out.

Nowadays, you can purchase mince meat pies from bakeries and brands like Walker, or even pre-made mince meat filling from Robertsons that you can spread on crumpets or scones. Different though mince pies have tasted over the centuries, these ancient flavors — pastry, cinnamon, cloves, citrus, nutmeg, mace, dried fruits — weave back through history, echoing familiar scents from the past into our wintry kitchens today. They connect us, on a deep, sensory level, to our ancestors, who like me look out at the cold, expansive darkness that is the outside world and think, "Nope. Absolutely not. Pass the baked goods — I'm staying inside."