The tale of two meatloaves

Go behind the scenes of Food52's “Big Little Recipes” cookbook 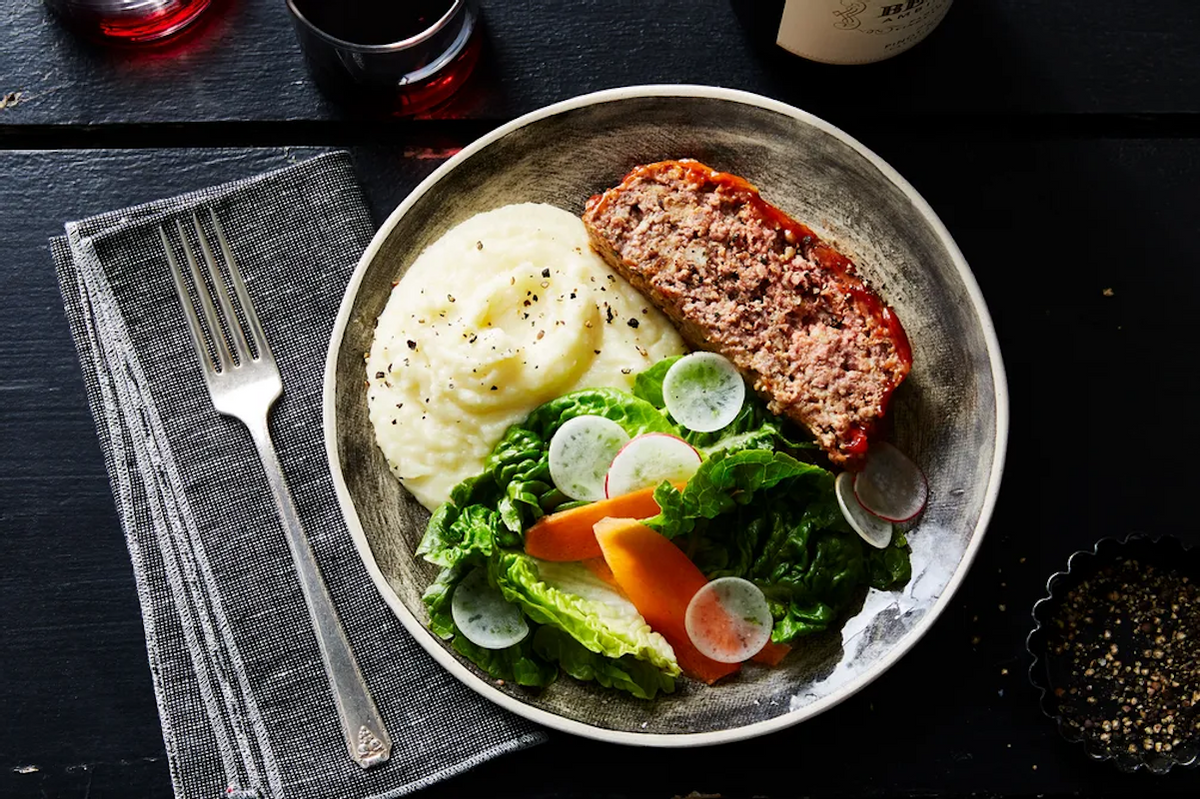 A Big Little Recipe has the smallest-possible ingredient list and big everything else: flavor, creativity, wow factor. That means five ingredients or fewer — not including water, salt, black pepper, and certain fats (like oil and butter), since we're guessing you have those covered.

I had to include the meatloaf in the "Big Little Recipes" cookbook. I knew this. With five ingredients — ground beef, yellow onion, bread crumbs, eggs, and ketchup — it's just the sort of low-lift, high-reward dish that the column is all about.

But then one thing led to another, and I didn't include it at all.

In the book, there are several dishes you might recognize from the column over the years. Except none of these were copied and pasted — every one was retested, revisited, reimagined, and interrogated with a million what-ifs.

Say, what if you used saltines instead of graham crackers in the Lime Posset? Two words: Heck yes. Or what if instead of Pork Tenderloin with Kimchi and Apples, it was pork chops? Turns out, the tenderloin really is better.

The meatloaf was one of those recipes that started out as one thing and, somewhere along the way, became something else entirely. The beef switched to pork (for sausage-y vibes). The ketchup to mustard (for tang and spice). The onion to cabbage — and this ingredient, in particular, changed everything. Sautéed cabbage adds loads of savoriness to the meatloaf, while raw cabbage becomes a lively slaw to serve alongside.

This week, I'm taking you behind the scenes of the recipe development process — so grab your apron and come on into the test kitchen. I also chatted all about Big Little Recipes with our Founding Editor and resident genius Kristen Miglore — so grab your headphones, too. And maybe a hot cup of coffee or tea for good measure. Why not?

Here are a handful of greatest hits that we reimagined in the cookbook. If you haven't already — what're you waiting for? — try the originals on the site. Then check out the shiny-new versions in print, and let me know what you think. I can't wait for this cookbook to be in your kitchen.

An old-school meatloaf you can count on. The book version swaps up almost every ingredient, except for the eggs (which provide structure and moisture) and the English muffin crumbs (which, um, I'm obsessed with). In the original (below!), you deglaze sautéed onions with water to create an instant vegetable stock, which keeps the meatloaf extra moist. In the book, that same magic trick works with sautéed cabbage.

Sure, the crackly-edged, falling-apart pork shoulder hogs all the attention. But it's the three-ingredient BBQ sauce — just ketchup, chipotles, and apple cider vinegar — that I'm smitten with. In the book, we also include a vegetarian riff. Can you guess the not-pork main ingredient? Let me know in the comments.

A buttery, oh-so-speedy chili you can and should make on a weeknight. Spoiler: The ingredients are exactly the same in the cookbook. What changes is the way they're cut. Instead of cutting them evenly, so they cook evenly, the book tells you to cut them unevenly (some chunky, some fine). This yields distinct textures and bonus complexity.

The combination of hot pasta and melting tomato butter is too good to not keep. So in this case, I actually added something to the recipe — while keeping the same tiny ingredient list. Enter: more tomatoes, sizzled in some of that tomato butter, until they burst and concentrate. Tomato-buttered tomatoes, how meta is that?

Breaded chicken cutlets without the bread crumbs. Sesame seeds create an extra-crunchy crust. While the recipe on the site uses chicken breasts, I retested with chicken thighs and, turns out, those work wonders, too. So the cookbook lets you take your pick. The salad also got a makeover — all you'll need is baby arugula and marinated artichokes (whose marinade turns into the world's easiest dressing).

This saucy, cheesy, community-favorite would make even an out-of-season eggplant feel special. I futzed with the type of mozzarella (is low-moisture really best?) and the order that the cheese and bread crumbs are layered (is there a better way?). The result is the same and also different, like Bennifer in 2002 and Bennifer in 2021.

For when you're too lazy to make classic oatmeal cookies — you know, with the creamed butter, the leavening agents, the raisins and/or chocolate chips. Effortlessly gluten-free, these only need oats, tahini, and brown sugar. If you're feeling kinda-sorta ambitious, there's another version in the book, where you toast the oats for even more flavor. It's a hands-off step that makes a huge difference.

OK, you got me, I made these over and over as an excuse to eat a lot of lemon bars. But! There were aha moments along the way. By scaling down the quantities, the crust became a smidge thinner for increased crustiness. And olive oil, which takes the place of usual butter in shortbread, also made its way into the lemon curd, to round out all the puckery sourness.

Snag a copy of the Big Little Recipes cookbook in our Shop, or a slew of other places, like Amazon, Barnes & Noble, Books-A-Million, Bookshop.org, Hudson Booksellers, IndieBound, Powell's, or Target.