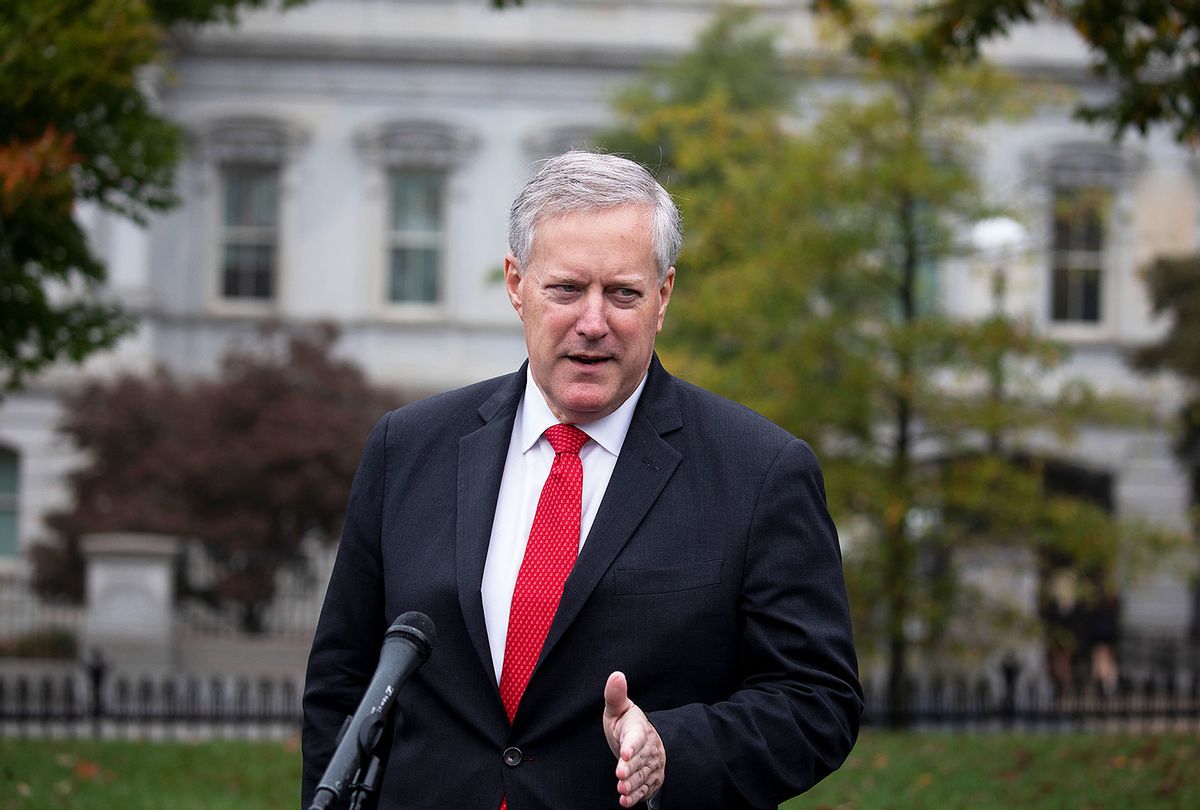 Mark Meadows new book, The Chief's Chief, reveals how "despondent" former President Donald Trump was after the Supreme Court refused to hear the Texas case to overturn the 2020 election.

Trump was evidently so certain that his three appointed justices would hand him a victory that he and Meadows agreed that they couldn't "believe" the decision to ignore the case.

"Considering what had occurred during the last four years, it was sadly believable," Meadows claimed.

But when it comes to the way Meadows understood the cases brought to court, he made it clear he didn't fully grasp the reality of the election lawsuits brought by Trump, Rudy Giuliani, Sidney Powell and Lin Wood.

"When we brought these credible accusations of voter fraud to court, however, they were dismissed quickly, before anyone even reviewed the evidence," Meadows falsely characterized.

As is being reviewed in the cases to sanction Trump's lawyers, the cases complaining of voter fraud were outright false. Those accusations were so egregiously false that Giuliani could be sanctioned by the court. He confessed that he didn't have "time" to verify if any of the cases cited in his list were actual voter fraud or to even confirm if they were true.

During Giuliani's Dec. 2020 hearing, The Detroit News explained, "the purported expert, retired Col. Phil Waldron, repeated widely debunked statements about Michigan's election results, which were certified by bipartisan boards in all 83 counties." Waldron made it clear that he didn't fully understand how elections work, explained Michigan Live. Of the thousands of claims cited by Giuliani, only eight could be actual voter fraud. That wouldn't change Biden's 154,000-vote lead over Trump, but the eight could be investigated by authorities for actual charges. Still, they would require proof.

"For the most part, the cases were dismissed because the judges believed that states had no 'standing' to bring the cases," Meadows wrote. They didn't have standing because Texas can't challenge the election results of Pennsylvania. It's not their state and they don't run Pennsylvania's elections.

"Texas has not demonstrated a judicially cognizable interest in the manner in which another State conducts its elections," the court wrote in the unsigned ruling.

"The facts of fraud were not looked at by the judges and courts" was another false claim from Meadows. That's a lie that has made the rounds of Facebook memes, Reuters explained in a fact-check, there were judges, some appointed by Donald Trump, who examine 60 lawsuits. The reason judges dismissed them is that the "rumors" or claims of fraud don't provide evidence necessary to prove fraud. Courts don't change an election because someone says they saw a suspicious person walking through a neighborhood.

"In the court's opinion, the president of the United States had no standing to bring a challenge to an election that he was running in — one that was unfairly decided against him," wrote Meadows. This was also untrue. In the case of the Pennsylvania Supreme Court, Trump lost the lawsuit complaining that local and state officials shouldn't be able to decide their own rules for elections.

In Trump's case, the court didn't say he lacked standing. The court said that you don't change the rules after people have already cast ballots. Even in Justice Clarence Thomas' comments acknowledges that fact.

Meadows closes the section by saying that the Supreme Court would have listened if Joe Biden brought the complaint. It implies that Meadows thinks Supreme Court Justices Brett Kavanaugh, Amy Coney Barrett, Neil Gorsuch, Thomas, and John Roberts are all in the pocket of Biden.

If Trump was "despondent," it was likely due to none of his aides being willing to explain the reality to him.

Meadows' book, The Chief's Chief, is on sale now.