Clinton pokes fun at Meadows' use of private emails, says he was "plotting a coup d'etat"

"His emails were about plotting a coup d'etat, while ours were about gefilte fish," Clinton tweeted. 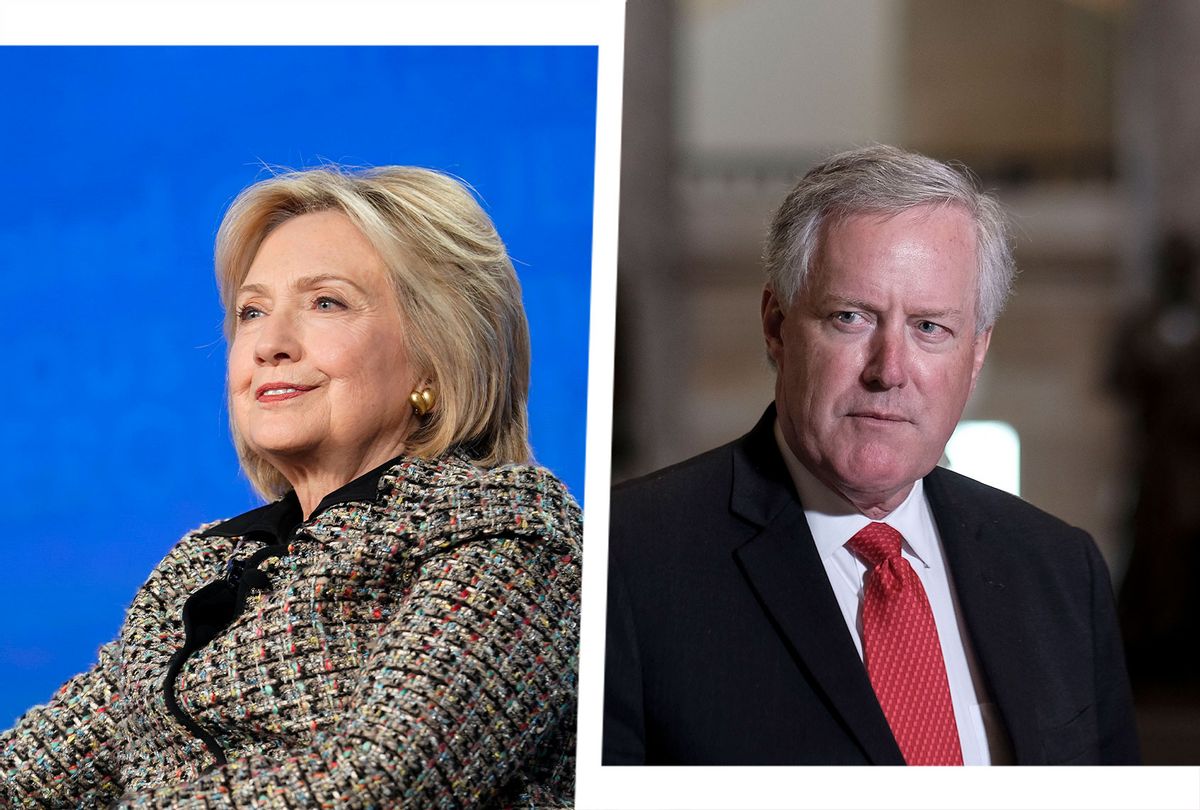 All throughout Hillary Clinton's 2016 election campaign, the former secretary of state was besieged by attacks related to her use of private emails for official public communications. Now that Mark Meadows, Donald Trump's White of Chief of Staff, is under federal scrutiny for allegedly doing the same thing, Clinton was quick to pounce online.

The development came after a Tuesday blog post published by MSNBC's Rachel Maddow, who argued that "if Hillary Clinton's email protocols were a major national story for over a year, Mark Meadows' use of private email accounts matters, too."

Quote-tweeting Maddow's post Thursday, Clinton responded: "Especially since his emails were about plotting a coup d'etat, while ours were about gefilte fish."

RELATED: Mark Meadows is having a really bad week — and Trump's is even worse

Back in September of 2015, while Clinton's election was underway, the State Department's Office of the Inspector General was tasked with reviewing Clinton's use of a private email server to send and receive hundreds of classified emails. (One email under review involved a U.S.-Israeli trade dispute around tariffs on imported carp, which is a main ingredient for gefilte fish.) Ultimately, then-FBI Director James Comey concluded that Clinton had been "extremely careless," but did not act with criminal intent, freeing her from potential charges. The apparent scandal was one of the most widely covered political stories at the time, and many critics felt that it contributed heavily to her 2016 loss.

This week, the House committee charged with investigating the Capitol riot has been probing Meadows' communications with various Trump allies, including a number of Fox News hosts.

According to The New York Times, Meadows was in contact with numerous Republicans in the House, all of whom were conspiring to reinstall Trump as president despite his electoral defeat in the 2020 election. Among them include Reps. Jim Jordan, R-Ohio, Andy Biggs, R-Ariz., Paul Gosar, R-Ariz., Louie Gohmert, R-Texas, Mo Brooks, R-Ala. and Scott Perry, R-Pa. The congressional coterie reportedly led a coordinated effort, spanning multiple agencies and state legislatures, to overturn the election in several battleground states. All of their efforts failed, and no evidence has yet emerged that the election was "stolen."

Last week, Meadows turned over a PowerPoint presentation that laid out a number of different, legally dubious pathways through which Vice President Mike Pence could have supposedly nullified the election certification process. In fact, Pence's role — as is the case with all vice presidents — was entirely ceremonial.

On Wednesday, the House voted to hold Meadows in contempt of Congress over his refusal to comply with a congressional subpoena. President Biden endorsed the vote Wednesday, saying that the Trump aide was "worthy of being held in contempt."