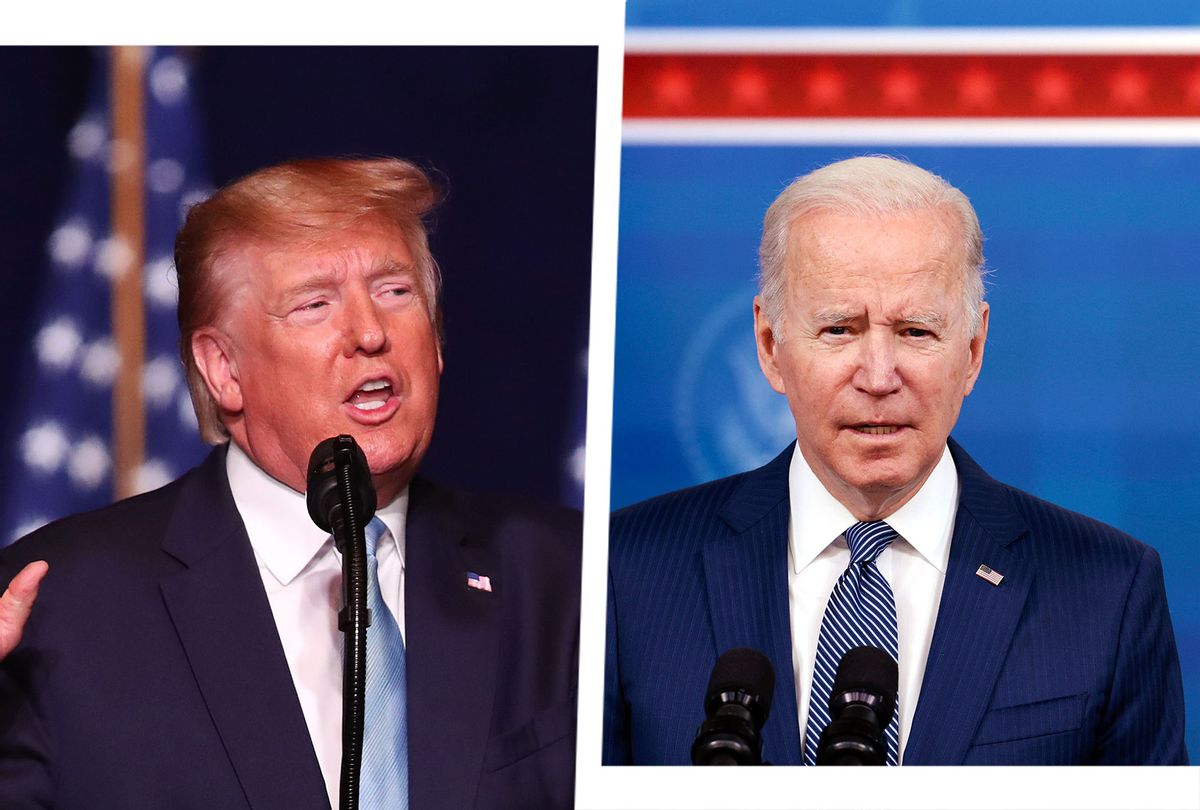 After days of rumors swirling among reporters on Capitol Hill, President Joe Biden confirmed it late Thursday evening: The Build Back Better plan is not going to pass this year. Which almost certainly means that the timeline for passing it is never.

Biden, of course, denied that "never" is in the cards. Instead, he released a statement to reporters, claiming, "My team and I are having ongoing discussions" with Sen. Joe Manchin, D-W.Va., the primary holdout stopping Democrats from passing the bill through the Senate. "Leader Schumer and I are determined to see the bill successfully on the floor as early as possible," Biden insisted.

As I note in Friday's Standing Room Only newsletter, the past 11 months have made it impossible to believe that Manchin is negotiating in good faith. Instead, every move Manchin makes suggests that his plan is what skeptics thought it was all along: pull out the few items that he and his rich benefactors approve of to pass through a slim bipartisan bill, and then doom the larger Build Back Better plan by wasting time with fake objections until Republicans retake Congress and permanently destroy it. Manchin explodes with hair-trigger defensiveness at even the mildest question that reminds him his "support" for the policies in Build Back Better is a big, fat lie. This is not the behavior of a man who actually intends to vote for a bill he keeps swearing he's one more tweak away from supporting.

Instead, Democrats are indicating a pivot to a voting rights agenda, which has been put on the back burner for months while Congress has been tangled up in the "will he or won't he" dance with Manchin. Biden told reporters Wednesday that "there's nothing domestically more important" than passing a voting rights bill. Even Sen. Bernie Sanders, I-Vt. — who drafted the original Build Back Better bill and clearly sees it as the culmination of his life's work — told reporters on Wednesday, "it's a lot more important that we deal with the voting rights issue" right now.

These statements are 100% true, as anyone who has been paying close attention can attest.

Donald Trump may have failed to overthrow the 2020 election by sending a mob to storm the Capitol on January 6, but his coup is not over. Indeed, all signs show that his plans to steal the 2024 election are coming together nicely. Honest election officials are being purged across the country, replaced with Trump stooges who will invalidate election results Republicans don't like. Insurrectionist types are taking over state legislatures, armed with plans to throw electoral college votes to Trump, regardless of how the people in their state vote. And it's widely believed that, if Republicans control the House in 2024 — which all signs suggest they will — they will simply refuse to certify any election Biden wins.

This is happening all out in the open. And yet somehow the majority of Democratic voters don't seem to notice or care that Republicans are literally plotting a fascist takeover of the country. As Zach Beauchamp of Vox wrote earlier this month, "Neither Democrats nor the general public are doing much of anything to stop [Republicans]." He cited a troubling October poll that shows only 35% of Democratic voters even recognize that democracy is under serious threat.

RELATED: GOP already has enough safe seats — through redistricting alone — to win back House in '22

Why Democratic voters are so blind to a threat that's playing out right in public isn't a surprise: The behavior of their leaders signals that there's no reason to worry. Oh sure, Democrats like to talk about how democracy is in danger. But rather than focus their energies on saving democracy, they spent the past 11 months trying to negotiate a social spending bill that was never going to get past Manchin's bad faith objections.

This isn't to say that the items in Build Back Better — child care, better drug prices, climate change provisions — aren't important. They are, in fact, critical. But Democrats failed to understand what Republicans know in their bones: This isn't an episode of "West Wing." The guy who gives the best speech doesn't win. Ideas don't matter. All that matters is power. The greatest agenda in the world — without the power to make it happen — is worth less than your March 2020 stockpile of toilet paper.

The prioritizing of Build Back Better over voting rights couldn't be a better symbol of how Democrats' understanding of power is totally backward. Their hope was that passing bold economic legislation and improving people's lives would prove to Americans that government works, leading Americans to feel more protective of their democracy. But what they've discovered is that, without a working democracy, bold economic legislation is just a fantasy.

Perhaps there was never any hope for a voting rights bill. Both Manchin and his fellow Democratic obstructionist, Sen. Kyrsten Sinema of Arizona, are clearly too sold out to corporate interests to care about the fate of the nation. But if Biden and Democrats had approached voting rights with the singular focus they brought to Build Back Better, they could have gotten the news to pay real attention, and, eventually, even the voters. Instead, most Democrats were lulled into thinking the Trump threat is over, and why shouldn't they think that? Biden was more focused on child tax credits than fighting fascism, and voters followed his cues.

As this collapse of negotiations over Build Back Better shows, Biden was foolish to think he could prove that government works when government clearly doesn't work, due in no small part to the already massive inroads Republican have made in their war on democracy. Democrats got millions more votes than Republicans in the 2020 election, and yet lost seats in the House and only control 50% of the Senate. The situation is only going to get worse once Republicans finish the next round of gerrymandering — just in time for the 2022 midterms.

All of which really underscores what is a major difference in the parties: Republicans understand, and have understood for a long time, the importance of building power from the bottom up.

It's why they're responding to Biden's presidential win with a hyper-local strategy focused on school boards and precinct chairs. It's why they don't have majorities in Congress and don't have the White House, yet somehow still have total veto power over Biden's legislative agenda.

The abortion issue best exemplifies this difference between the parties.

Democrats have absolutely won the national debate on the issue. Strong majorities of Americans support reproductive rights and want Roe v. Wade to stay in place. In Democratic "West Wing" fantasies, this issue should done and dusted, since the left won the argument years ago. But abortion is still going to be banned in much of the country by this time next year, and, if and when Trump steals the White House in 2024, the GOP-controlled Congress will likely pass a federal ban on abortion. That's all because Republicans didn't worry too much about winning the argument over abortion, which they couldn't do anyway. Instead, they carefully built the power with each federal court appointment and state legislative seat. Now Republicans can ban abortion all they want, and public opinion has no power to stop them.

Democrats had it backwards, believing good policies would lead Americans to reward them with more power. Now they are finding out, much to their chagrin, that "good policies" count for nothing without power. Meanwhile, Republicans are moving full steam ahead with their already successful plan to amass so much power that they never have to answer to voters again. And there's little Democrats can do to stop them because, due to their slim majority, a couple of corrupt senators are going to block voting rights just as surely as they blocked Build Back Better. Democrats don't even have a popular movement to fight for democracy, having spent 11 months focusing their voters on this theory that good policies would lead to more power. Now it's clear that the reverse is true, and it's probably too late to fix the situation.