The new details were part of a lawsuit Alexander filed to stop the Jan. 6 committee from pulling his phone records 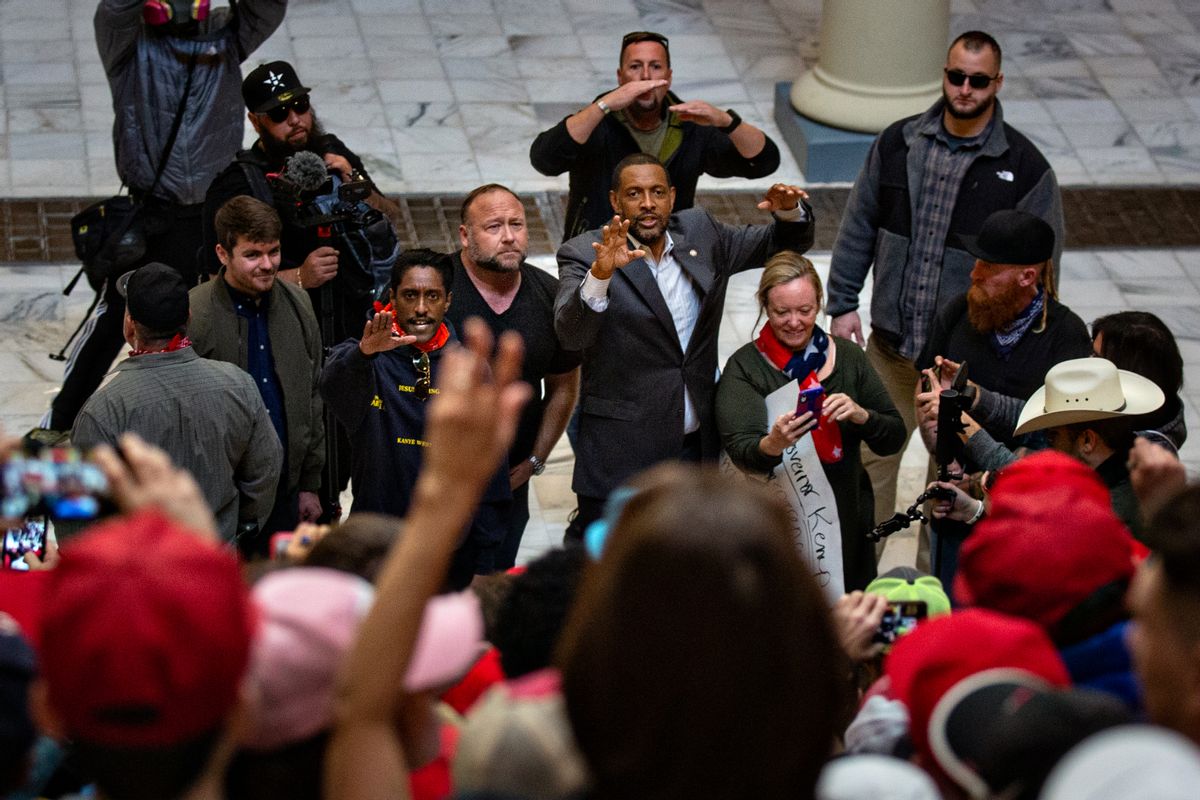 From right: Vernon Jones, Democratic Party member of the Georgia House of Representatives along with and conspiracy theorist Alex Jones and Ali Alexander, organizer for Stop the Steal, gather at the Georgia Capitol Building on Wednesday, Nov. 18, 2020 in Atlanta, Georgia. (Jason Armond / Los Angeles Times via Getty Images)
--

One of the principal organizers of the Jan. 6 "Stop the Steal" rally that preceded a deadly riot at the U.S. Capitol disclosed names of several Republican lawmakers who he was in communication with prior to the attempted insurrection, according to a new report.

Lawyers for Ali Alexander, who played a key role in founding the "Stop the Steal" movement which sought to use false claims of election fraud to overturn the 2020 election results, confirmed in a new court filing that he spoke with GOP Reps. Paul Gosar, Mo Brooks and Andy Biggs in the days leading up to Jan. 6.

Alexander's accounting of his communications is the most detailed look yet at the Republican lawmakers' role in encouraging and planning for the events of Jan. 6, and gives the committee new ammunition in seeking information from Republican colleagues who embraced fringe right-wing figures in their unsuccessful attempt to keep then-President Donald Trump in power. The details were included in a lawsuit Alexander filed Friday, in an attempt to stop the Jan. 6 committee from pulling his phone records from cellular service provider Verizon.

During his appearance before the committee, Alexander apparently "testified that he had phone conversations with Rep. Brooks' staff about a 'Dear Colleague' letter and how his activists could be helpful," according to POLITICO. He also reported speaking with Gosar over the phone several times, as well as a few in person meetings with Biggs.

At one point, Alexander even briefly posted a video online — which has since been deleted — claiming the original idea to stop Congress' Jan. 6 certification session was his alone, and that he worked with Gosar, Biggs and Brooks to try and make it happen.

"We four schemed up to put maximum pressure on Congress while they were voting," Alexander says.

Both Biggs and Brooks denied to POLITICO that they ever met with Alexander, while Gosar has openly appeared at events with him but refused to comment on their relationship.