How to cook a ham like a champ, from oven temperature to glazing technique

Here's what to know about cooking this spectacular holiday roast 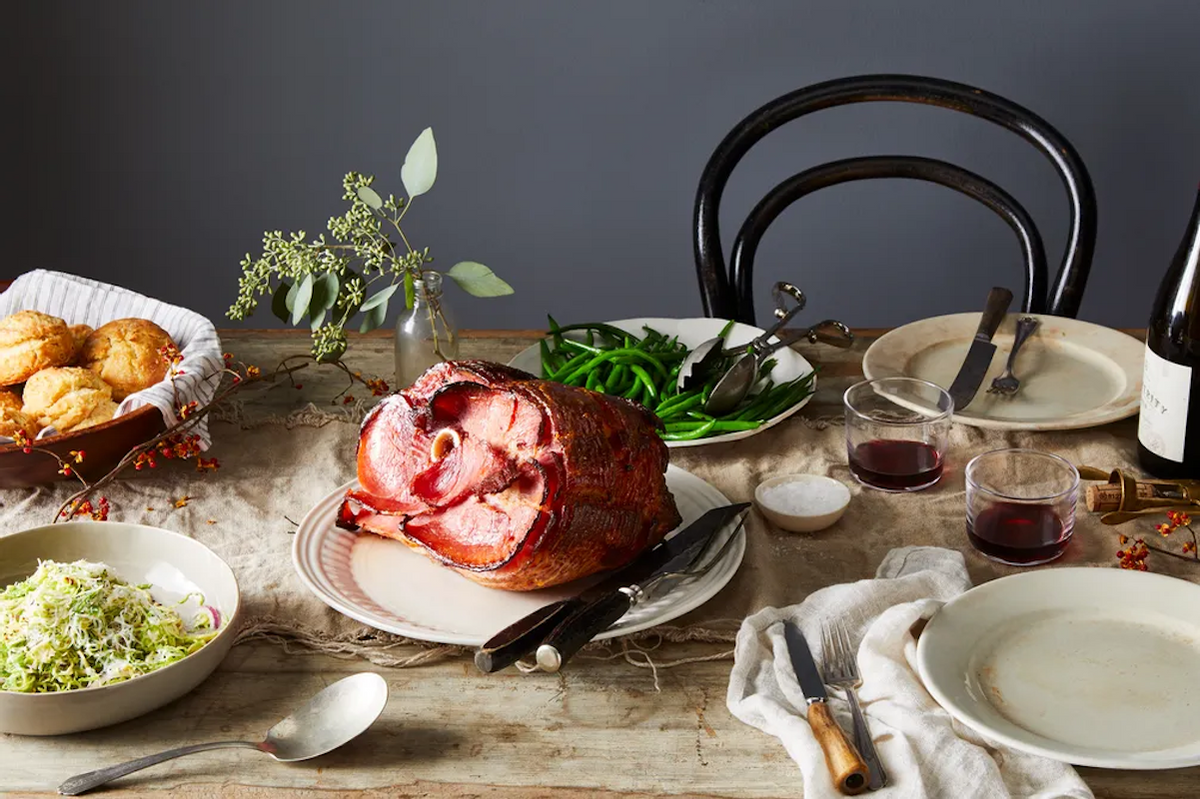 Whether you're hosting a gaggle of relatives for the holiday or planning a special night for you and your sweetie: Go ahead and bake a ham. As the late Marion Cunningham put it, "Baked ham is an ideal main dish for beginning cooks and the best answer for the harried cook." Leftover ham freezes beautifully (hi, hello sandwiches, sautéed greens, fried rice). And what's more festive than a honking roast? Cooking a beautiful bone-in ham with a Dijon mustard or maple syrup is easier than you may think (promise!). So today, we're answering your most frequently asked questions, like *What is a ham, anyway? What types of hams are there to choose from in the grocery store? How many minutes per pound? Do I always have to cook my ham in the oven? What about a slow-cooker or Instant Pot?*

We generally think of baked ham as the centerpiece on an Easter or Christmas table. If you've never baked a ham before, start with our Super Simple Glazed Ham; a half ham is scored and covered in a combination of whole-grain mustard, honey, nutmeg, ground cloves, and brown sugar. And then something really cool happens. To keep the ham moist — and to give it even more flavor — use a spray bottle filled with bourbon (!!!) to mist the brown sugar-spice coating. It's an innovative, mess-free technique that lends itself to so many other applications.

Ahead, here's what to know about cooking this spectacular roast.

What is a ham, anyway?

Just like steak (ribeye! flank! bone-in! dry-aged!), the world of ham is full of terms. Let's break down the important ones:

How big is a whole ham?

Big! Most boneless spiral hams weigh about five bones, but bone-in cuts will weigh even more, at least 10 to 15 pounds — note, this could serve 30 people or then some. (Estimate ⅓ to ⅔ pound per person.) If you're a smaller group and don't want to freeze that many leftovers, consider buying a partial ham.

Does ham always contain a bone?

Nope. You can find most hams — whether whole or partial — without a bone. That said, these boneless cuts are preferable for eating immediately (compared to glazing then baking), so they may be more processed. Be wary of added ingredients, such as water, on the label.

How long should I cook a ham in the oven?

For partially cooked ham, you should cook it until the center reaches an internal temperature of 160°F. For fully cooked ham, which may be marked as ready to eat or something similar, you just want to warm it up to about 145°F.

Heat the oven anywhere from 300°F to 350°F. The ham will be very happy on a rack set in a roasting pan (but if you don't have a rack, that's OK too). There's no need to cover it with foil, but you could if you want (some sources argue that this avoids any drying out). Just make sure you uncover before glazing.

Can I cook my ham in a slow cooker?

Yes! This method is fuss-free and hands-off. According to The Kitchn, you can cook an 8- to 10-pound fully-cooked ham in a slow cooker on low for 4 to 5 hours. On the other hand, AllRecipesrecommends that the same size ham cook for 8 hours. Which is to say, you do you! Since you're starting with something that's already cooked, it's hard to go wrong.

With the oven at 325°F, The Joy of Cooking recommends the following cook times for three different cuts of ham:

How do I make a glaze for ham?

A glaze is a great way to make your ham your own. Maple-chipotle? Ginger-clove? Paprika-honey? You tell me! It also makes the roast super glossy and beautiful. Just keep these tips in mind when brushing glaze over the ham: