Manchin's "no" wasn't the end of the D.C. poker game — and BBB isn't dead. This is exactly where Joe Biden excels 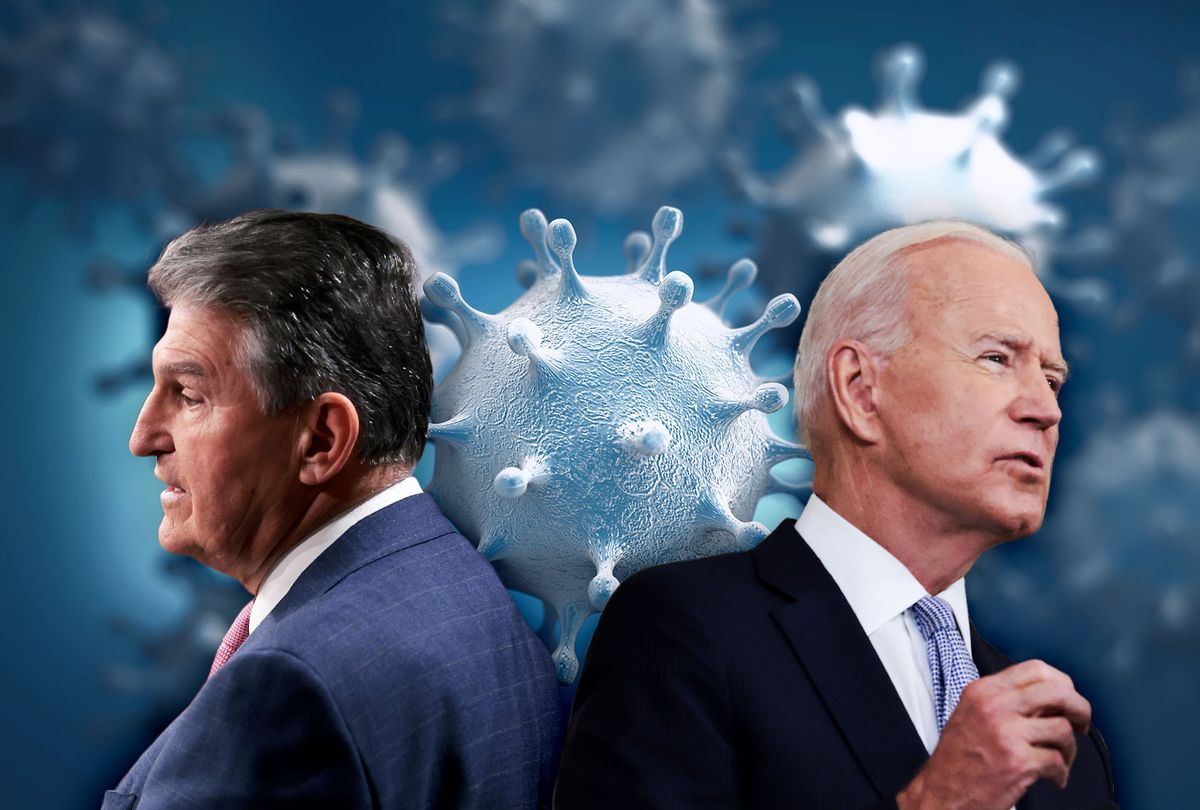 And so this is Christmas. And what have we done?

The country got "Scrooged" this Christmas.

In a remake worthy of the Bill Murray movie, starring Sen. Joe Manchin and the omicron variant, it looks like President Joe Biden will have a hard time delivering an upbeat spirit of Christmas future.

Prior to the perfect storm of disease and political pestilence, Biden was trying hard to convince the country that the newly passed infrastructure bill was the panacea for all of our ills: clean water, a working power grid and jobs.

That message nosedived on Sunday when West Virginia's only Democrat in the Senate, former college quarterback Joe Manchin, dropped a bomb on Biden — saying on Fox News that the infrastructure's even bigger companion legislation, Build Back Better, was most likely toast because he wasn't going to vote for it. The dynamics being what they are in Congress — a very slim majority in the House and a 50-50 Senate — the Democrats absolutely need Manchin to have a hope of passing the legislation.

Manchin's proclamation set off a firestorm of recriminations, overindulgent speculation and specious political analysis. It was the journalistic equivalent of watching pundits pull out their hair and scream like Bart Simpson being choked by Homer. Worse, it helped to tank the stock market on Monday. You could literally hear Republican staffers on the Hill giggling with delight. At least I did, outside a couple of Republican congressional offices, as they discussed the issue.

RELATED: How Joe Biden lost Joe Manchin — and how he can win him back

On Sunday the White House issued a terse reaction to Manchin through press secretary Jen Psaki. Manchin responded to being taken to the woodshed by the president by blaming the White House staff for his displeasure with the Build Back Better agenda. "That's the oldest dodge in D.C.," a senior Biden official said — a sentiment echoed by Republicans who winced when they heard it. "It means the ball is still in play," I was told.

Kurt Bardella, writing in USA Today, had the best take on the fallout of Manchin's move — at least if you're a loyal Democrat. "My advice to Democrats is assume you will lose everything in 2022. Knowing that, do what you need to do. Don't let anything hold you back. Don't operate from a position of fear. Instead, put the fear in everyone else."

That's good advice for Democrats who will see a total of 22 House members retiring in 2022, the most in the last 30 years. The realization that Biden's window is closing on getting meaningful legislation passed only heightens the frustration with Manchin. Of course rumors of him switching parties doesn't help either.

Others have called Manchin the "de facto president" for being a roadblock to his more progressive colleagues. But writing in Roll Call, John Bennett suggested it was time to quit calling Manchin that, since it misses a key point: Manchin isn't the de facto anything. He's just a rural-state senator, doing what the Constitution allows him to do.

But more to the issue, Sunday's point and counterpoint revealed what was really going on. Blaming White House staff has been around as long as Washington. So, could Manchin's move and the president's reaction be nothing more than a strategic dance around the head of a pin? A mere (gasp!) political maneuver? Some kind of negotiating strategy?

I suspected it was, and asked Psaki that question Monday in her first briefing after the dust-up. "Moving forward," I said, "you've already taken Sen. Manchin to the woodshed. Are you going to invite him back into the fold? Are you going to try to reach out to him?"

Psaki's answer was, "Of course," and then she went on to explain the importance of the Build Back Better agenda, saying the president had made it clear "that we absolutely want to work with Sen. Manchin and all Democrats to get this done." Psaki even held out hope of enticing a few Republicans.

So the bottom line here is "kabuki theater," as one reporter termed it. The BBB negotiations are still ongoing.

No, the BBB isn't dead — and this is no Monty Python skit, either. Manchin and the president are still talking. But you can't blame most of the pundits for missing this. Joe and Joe are a pair of old pros, engaged in old-fashioned politics as it was once practiced daily around here. Since that's not done much anymore, it's become harder to recognize. But as it turns out, old-fashioned politics is still alive, and gasping for air in the fetid stench of a very divided Washington. It's also what Biden relishes. He's a horse-trader working the market. During his long years in the Senate he was one of the best practitioners of this: finding common ground between adversaries.

If the president was done with Manchin, everyone would know it. Biden has never had a problem expressing himself — especially when he's angry. But he's in a different place now. At best, he has one election left in him. He knows his window is closing and he's got the patience and determination to keep focused. He acknowledged that as well on Tuesday in the East Room, as he spoke about the omicron variant. "You've heard me say this before: Some people think maybe I'm not Irish because I don't hold a grudge," he said. "Look, I want to get things done. I still think there's a possibility of getting Build Back Better done."

Biden is passionate about the plan. In his East Room appearance he focused on what is at stake. "Imagine being a parent, looking at a child, and you can't afford — you have no house to borrow against, you have no savings," he said. "It's wrong. But all the things in that bill are going to reduce prices and costs for middle-class and working-class people."

That focus makes it difficult for Manchin or any candidate to ignore the issue — especially if they're running for office in 2022.

And as the president left the East Room Tuesday, he struck an optimistic note: "Sen. Manchin and I are going to get something done," he said emphatically.

That's the tell, poker players. As Yogi Berra once said, "It ain't over til it's over." It ain't over. Bet on the guy who's staying focused.

What is over, though, was also readily apparent in Biden's Tuesday appearance in the East Room. He's done indulging those who are reticent to get vaccinated against COVID. He's apparently had all he can take of the anti-vax, chlorine-drinking, Joe Rogan-worshipping anti-science heathens who are putting the world at risk. As early as Friday, members of the Coronavirus Task Force were saying, "We are intent on not letting omicron disrupt work and school for the vaccinated. You've done the right thing and we will get through this. For the unvaccinated, you're looking at a winter of severe illness and death for yourselves, your families and the hospitals you may soon overwhelm."

I asked Psaki about that on Monday, quoting her recent remarks back at her: "I mean, what you said recently, 'Hey, for those who are vaccinated, it's mild or asymptomatic. For those who are not, death and destruction awaits you.' So are you pretty much done trying to be diplomatic on this?"

With her permanently polite smile, Psaki acknowledged that. On Tuesday, the president reiterated it. "The answer is straightforward: If you are not fully vaccinated, you have good reason to be concerned," he said. "You're at high risk of getting sick. And if you get sick, you're likely to spread it to others, including friends and family. And the unvaccinated have a significantly higher risk of ending up in a hospital or even dying.Almost everyone who has died from COVID-19 in the past many months has been unvaccinated."

Biden told people it was their "patriotic duty" to get the shot, and then took the (for him) unprecedented step of acknowledging and thanking Donald Trump, who recently announced he had received the booster.

"Let me be clear," Biden said. "Thanks to the prior administration and our scientific community, America is one of the first countries to get the vaccine. And thanks to my administration and the hard work of Americans, we led a rollout that made America among the world leaders in getting shots in arms."

Watching Biden battle with Congress and the coronavirus with the vigor of a man half his age should remind everyone that, in the end, Ebenezer Scrooge changed.

Biden deserves criticism for his poor and inconsistent messaging. But on Build Back Better and the pandemic there has been no better warrior for the cause.

This week is pivotal in the Biden presidency. As noted, he faces a closing window to get meaningful legislation enacted. He's holding no grudges and wasting no energy that can be put to use getting to the finish line — whether it's playing politics with a colleague or being blunt with those who are willfully ignorant of the reality of the pandemic. There was a time when we were offering beer and prizes to those who weren't vaxxed. Now, Biden is done and it's time to move on: Deal with reality.

He's showing genuine determination and resolve in dealing with the issues that have Scrooged us all. The future of, course, remains unwritten. Scrooge found out that things can change. Joe Biden is counting on that.

More from Brian Karem on the troubles and travails of the Biden White House: