Cuban-Chinese arroz frito is a reminder of a complex past

No recipe is the same, but all share soy sauce, rice and a history lesson 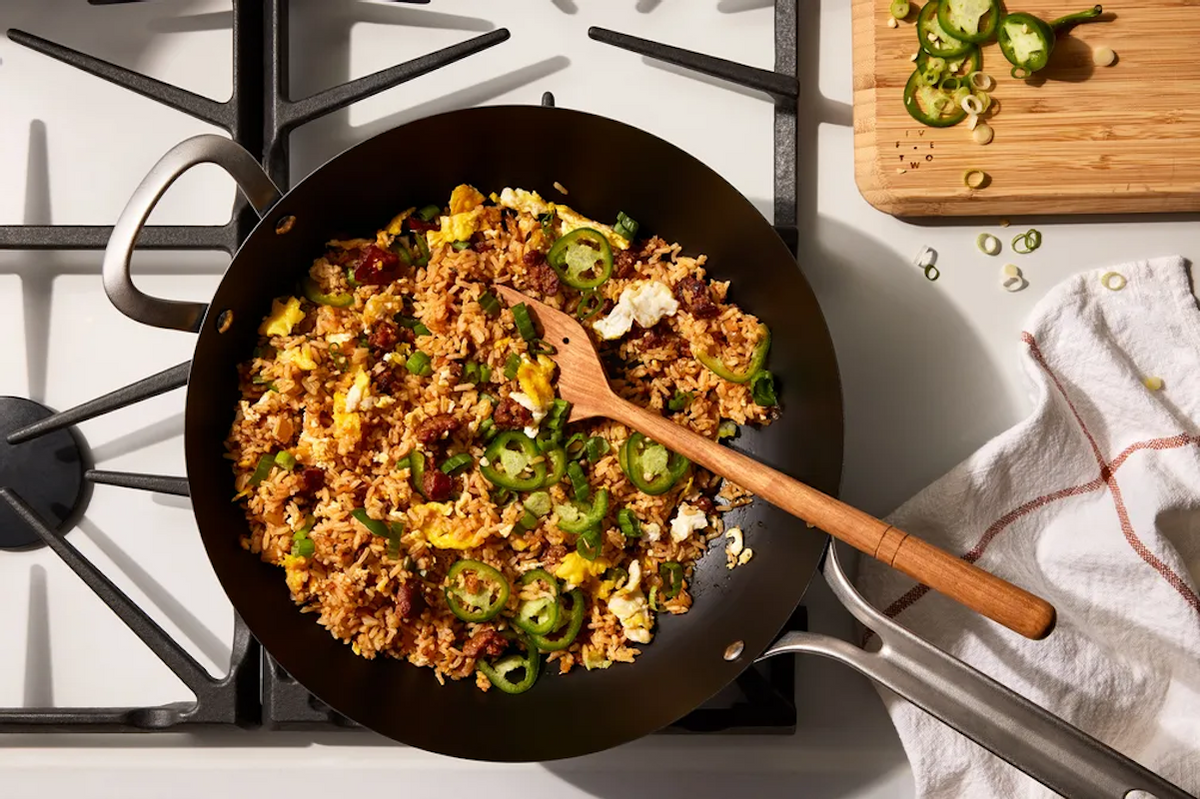 Ask a Cuban-American for a traditional family recipe and you'll find a common source of laughter. After all, years of training as tiny sous chefs to our abuelas and mamas have taught us that Cuban food (largely considered a peasant cuisine in the culinary world,) is first and foremost about learning to adjust for which ingredients one might have on hand, as well as the preferences of who is cooking and eating. In fact, it seems that if there has ever been a rule to follow precisely when it comes to cooking a Cuban dish, it is to have a grasp of the history behind the meal you're about to serve, as it has had such an influence on your identity. While being encouraged to measure out cups of rice and seasonings for dishes like ropa vieja and Moros y Cristianos by handfuls and finger pinches, young Cuban-Americans learn the essential lessons of their island country's extensive, and often unexpected, past.

For me, a first generation-American by way of my mother (she fled Cuba along with her parents and siblings during the Revolution,) the most impressionable lesson about our island country's culture lies in one of my favorite meals: arroz frito, a Cuban classic with Chinese roots.

With its Chinese parentage, arroz frito (which directly translates to "fried rice" and is known colloquially amongst Cuban-Americans as "Cuban-Chinese fried rice,") is enough to serve as a metaphor for a country forged by transnational migration and networks. When I first learned to make arroz frito, I used a stool in order to see over my family's kitchen counter. My mother, an Afro-Cubana, had decided to teach me how to make the dish — not only so I could eventually pass it on to her someday-grandchildren, but so that I could understand that no country is made up of one type of person. Cuba, its population made up of European, African, Indigenous, and Chinese people, was just one such example. Since graduating from step-stools, I've come to learn that no family or restaurant's take on arroz frito is exactly the same — as is the case for just about any Cuban dish. Still, all of its versions rely on three common elements: soy sauce, rice, and a history lesson. The measurements for the former might vary, but the story of how this dish so deeply rooted in Chinese cuisine came to Cuba, remains the same.

From 1848 to 1888, a time when the British were working to pressure their fellow imperial powers the French, Spanish, and Portuguese to end the slave trade, Chinese laborers were brought to the Caribbean island by Spanish-colonized Cuba as indentured servants. In "Chinese Cubans: A Transnational History (Envisioning Cuba)," Kathleen M. López explains how during a particular run of this transpacific migration, called the Coolie Trade, nearly 142,000 Chinese immigrants signed indentured servitude contracts (with little understanding and foresight of the brutal conditions they were set to endure,) so that they could work in Cuba.

Of course, arroz frito wasn't the only dish to crop up from this emergence of Chinese immigrants in Cuba. Today, Cuban-Chinese restaurants can still be found in parts of the U.S. (Just check out Nuevo Jardin De China in New York or El Crucero Restaurant in Miami) with dishes that keep up with the union of these laborers and their new home that extend beyond arroz frito. Oftentimes these menus feature grilled or fried pork, black beans, and rice (all areas of common ground for both cultures in terms of accessibility and familiarity), common items include dishes like res y brócoli estilo chinoand costilla con salda de frijolitos chino. Still, no matter the restaurant and menu, arroz frito is almost always present.

During their time in Cuba, these Chinese laborers cooked with local rice options such as Valencian short-grain and long-grain white rice, along with other Cuban essential ingredients, using the Chinese method of stir-frying. After rice, the basic components tossed into arroz frito are oil and an animal grease (my family uses rendered bacon fat), as well as cooked diced ham and other meats such as shrimp, diced pork, and diced chicken. Vegetables like green peas and red bell peppers are also often tossed in. Soy sauce, scallions, garlic, and eggs are also added to the mix. While my family recipe calls for the eggs to be beaten in a bowl and then added to the pan right along with the other sizzling ingredients, similar to many Chinese fried rice techniques, I've also seen recipes where the eggs are scrambled separately and added in fully cooked. Once, I had dinner at a Cuban restaurant where the eggs were served as a topping, à la the Japanese dish omurice. As my mother would say, "¿No te lo dije?" — Cubans do things in all sorts of beautiful ways.

"I have fond memories of watching my mom cook growing up and I remember her always cooking fried rice," said Chico Chi, a DJ and producer with Chinese-Cuban roots. Both of Chi's parents were born in Cuba — their father in Havana and mother further in Jaruco. Chi's parents moved to the U.S. as children, and speak Spanish as well as Taishan, a Chinese dialect. Arroz frito traveled with them. On their mother's version, Chi noted: "She makes an omelet with egg instead of cracking it into the dish while everything else is cooking."

The Cuban-American cookbooks and restaurants featuring arroz frito are another such example of how arroz frito differs based on the family, the person, the preference. Variations of arroz frito can be found in cookbooks favorited by Cubans ​​such as 1979's The Cuban Flavor: A Cookbook by Raquel Rábade and Marcella Kriebel's more recent *Comida Cubana: A Cuban Culinary Journey". On the other hand, some restaurants in the U.S. feature recipes that elect to add lobster tails or crab. The Los Angeles favorite El Cochinito, opts for a more conservative take on the dish with shrimp, ham, pork, egg, green onions, and bean sprouts. Daniel Navaro, the current chef and owner, learned the recipe for arroz frito from his abuela — the former chef of El Cochinito; her father owned restaurants in Cuba, but she didn't grow up making this dish.

"My abuela did have a Cuban-Chinese friend she met in Los Angeles when she opened the restaurant. She said he helped her refine the fried rice. He helped source the right soy sauce and showed her how to use the wok." Navarro shared. "I can still remember my abuela looking over my shoulder and guiding me. Fried rice requires a tremendous amount of attention to detail. You have to start with cold rice and all the knife cuts have to be consistent. Your relationship with the wok and the burner takes time to develop. Controlling the heat throughout each step is so crucial."

Even if every step is executed perfectly, the seasoning is paramount: Navarro recalls shopping at a store in Echo Park for a specific soy sauce. "And if they were out for any reason, she would take [arroz frito] off the menu. Perhaps that's what makes us stick out." Today, El Cochinito uses the same recipe, the same sauce (Pearl River Bridge Gold Label Premium Dark Soy Sauce), and the same attitude when it comes to its availability on the menu. No sauce? No arroz frito.

Cuban-American journalist Jorge Rodriguez-Jimenez explained that he's developed a completely personal version of arroz frito. Instead of sticking to a family recipe, he created his own after moving away from his family in Florida. "I make mine as a fusion of Cuban and Japanese, using black beans and Mahatma white rice. All you Cubans know about Mahatma," he added, alluding to the long-grain Jasmine rice typically used to accompany dishes such as ropa vieja and arroz leche. He also adds Japanese seasonings, rice vinegar, and sometimes swaps ham for Spam. "That's what's so great about food, it's suggestible. Food is one of the most intricate and ever-evolving parts of culture — you can see the influences of a globalized world and immigration in dishes like arroz frito. It's one Cuban dish I am most proud of to represent my culture and heritage."

In a way, the many takes on arroz frito speak to the heart of Cubanidad, particularly for those of us living in the U.S. today. Like the people across the globe who've immigrated to and from the island, arroz frito is a dish that has been made better by its manifold additions. And it's persisted. No matter the drudgery, no matter the revolution or trials, it remains essential.