Even lukewarm endorsements of COVID vaccines are off limits in far-right circles, apparently 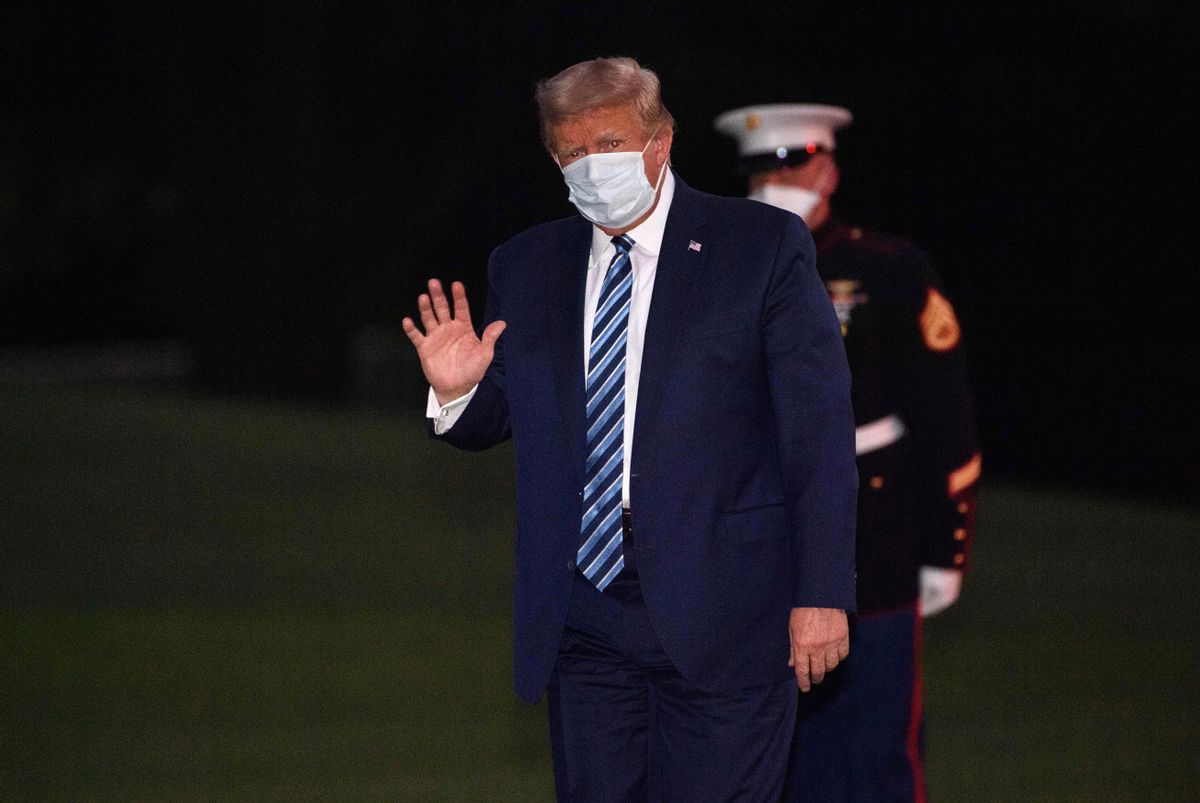 Then-President Donald Trump waves as he arrives at the White House wearing a facemask upon his return from Walter Reed Medical Center, where he underwent treatment for Covid-19. (NICHOLAS KAMM/AFP via Getty Images)
--

Devoted far-right followers of former President Donald Trump are finally turning on him — and all it took was a series of enthusiastic public statements endorsing COVID-19 vaccines.

It started on Sunday when Trump revealed during a rally with longtime conservative pundit Bill O'Reilly that he had received a booster shot, a fact that attendees greeted with boos.

"Don't, don't, don't," Trump responded after hearing the boos. "That's alright, it's a very tiny group up there," he added, pointing to a section of the crowd.

He doubled down on his endorsement of vaccines Wednesday during an interview with online commentator Candace Owens, saying definitively, "the vaccine worked."

The comments angered many of Trump's biggest supporters online, sending alternative social media networks like Telegram and Gab into a frenzy. Prominent conspiracy theorist Alex Jones and "Stop the Steal" organizer Ali Alexander led the charge against Trump, denouncing the twice-impeached former president for the comments.

"Trump, stop. Just stop. Have your position (backed by Fauci) and allow us to have ours (which is backed by science). This losing is getting boomer level annoying," Alexander wrote on Telegram, Insider reported.

Jones, who has been a steadfast Trump supporter for years, insinuated that Trump had abruptly switched allegiances as a result of his vaccination.

"Hell, we're fighting Bill Gates and Fauci and Biden and the New World Order and Psaki and the Davos Group ... and now we've got Trump on their team!" Jones said during a broadcast of his "Infowars" program Tuesday.

Even right-wing cartoonist Ben Garrison, who has spent years drawing beefed-up versions of Trump in various states of undress, had enough of the former president's comments. In a new cartoon this week, Garrison drew a frightened-looking Trump riding on a "vaccine bandwagon" alongside TrumpWorld villains like the "corporate media" and "Big Pharma," among others.

The disavowal of Trump's most devoted followers underscores the extent to which medical misinformation and anti-vaccine sentiment have taken over the conservative base, making even lukewarm endorsements of vaccines off-limits. These are the same people who have stood by Trump through a number of scandals, including bragging about sexual assault on camera, two impeachment trials, and an attempted insurrection at the U.S. Capitol.

The simmering TrumpWorld civil war has also had a similar effect on the community of people who subscribe to the QAnon conspiracy theory — leaving them unsure whether Trump has abandoned the anti-vaccine movement, or is simply following a plan so complicated and secret that they cannot comprehend its inner workings.

Former Trump attorney L. Lin Wood, who has himself touted various tenets of QAnon, pushed the latter theory, urging the former president's supporters to withhold their judgement for the time being.

RELATED: What happens if Trump admits it all? Nothing much — at this point, that might help him

"I believe We The People should wait until ALL the facts are known before passing judgment on the President's wartime strategy and the tactics designed to achieve victory," he wrote on Telegram.

Rolling Stone reports the comments caused a fracture in the online message boards where Q followers congregate — a "hornet's nest," in Wood's own words.

"Hornets must not like the TRUTH!!!" he wrote in a subsequent post on Telegram. "You don't have to agree with every statement President Trump makes or position he takes…. Judge the entire body of President Trump's world as president… He loves America, freedom, and We the People."