Embracing my family's quirky holiday traditions from far away 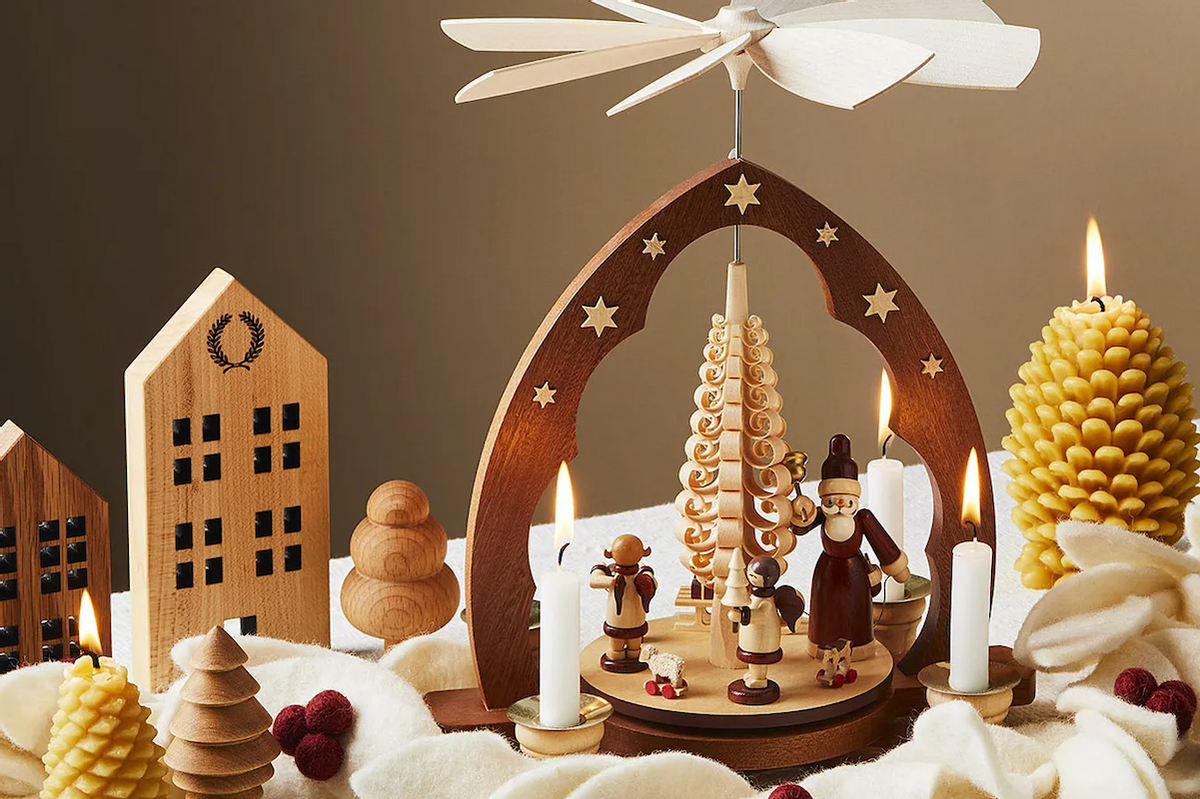 Christmas at my mom's begins with the tree. I wouldn't call it a tradition so much as her obsession with erecting the perfect hulking evergreen — so tall that its tippy top brushes against our living room ceiling — and decorating it just so with white lights and ornaments, some as old as her adult children, others new additions to replace the broken bulbs of years past. Like the accumulated Christmases under our belts, each ornament has its own story to tell.

Behind the tree there is a sliding glass door, and just outside, a deck that hangs over the open woods, which serves as an annual Christmas tree graveyard. There, the beloved trees will inevitably find themselves on the 27th of December, tossed out just as fast as they were dragged into our home, before their needles even have the chance to turn brown and descend on my mom's spotless wooden floor.

Around the same time that the tree goes up, a neat row of a dozen or so Santa Claus figurines take their place on the mantelpiece. They cover a range of styles and ensembles, not unlike a fashion show lineup featuring looks inspired by various decades. Next to a slender Santa in muted, earthy tones and wispy, ragged facial hair stands a plump Santa sporting a manicured beard and cherry-red coat.

Throughout the holidays, my mom is very focused on keeping the house clean. To her, the line between festivities and chaos falls where the mess begins. My childhood memories of Christmas morning include her gathering wrapping paper directly from our excited hands as we tore it from our presents, with maybe a repurposed gift bow affixed to her hand with double-sided tape. Then, still in pajamas, she'd pull on a Nordic parka and head outside to the driveway to light a bonfire of used wrapping paper and the Gap boxes that once held toasty socks and flannel pajamas. There, in front of her glowing Christmas effigy, she was happy.

My sister, brother, and I tend to poke fun at her. We'll call whichever one of us has yet to arrive back home and report the goings on. "Mom won't stop talking about the tree," I'll tell my sister. "She keeps making me sit with her to admire it." We'll both laugh — she is that mom from the cult Christmas tree video. My sister might sigh, "I can't wait to get there," because as much as we mock the quirks of our childhood home, we love it just the same.

The first year that I missed Christmas at home, I was in Paris, under the guise of studying abroad. In reality, I spent my days chasing down pastries and (when I could) nibbling on foraged morels at very edgy neo-bistros, all the while trying to look un-American and unimpressed — in other words, my idea of French. When my then-boyfriend Marc invited me to trade gray Paris for sunny Barcelona to spend the holidays with his family, the idea of a Mediterranean Christmas was beyond tempting. I said yes right away.

I flew on a puddle jumper with no assigned seats and landed in a city that was definitely not Barcelona. I may have been duped by a budget airline, but Marc was there waiting for me, in Girona, and within a couple of hours, we were at the lofty apartment that he shared with his sister in the Gràcia neighborhood of Barcelona. It wasn't mine, but it was comforting to arrive at a family home for the holidays.

I'd love to write about how much I ached for the sleigh riding and the icy sludge of upstate New York, but I didn't — at least not right away. On Christmas Eve Day, I went for a jog along the Barceloneta beach in a T-shirt with the sun beating down from a cloudless blue sky. Afterward, I went to buy a bunch of presents for Marc's family. As it turned out, cold was not a requisite for the holiday spirit.

Later that night, we grazed on canapés and floated around a glittering white Christmas tree. In Spain, for environmental reasons, it's tricky to acquire a real tree. Don't quote me, but someone once told me that it has to do with all the trees mowed down to create the Spanish Armada — they've been working on regrowing their forests ever since. Should one wish to use a real tree, there are strict replanting requirements, so most Christmas observers celebrate with fake ones instead, and understandably — holidays are stressful enough without worrying about reforestation.

Decorated with tasteful red, green, and silver balls, and blinking white lights, their tree was undeniably pretty. Still, I couldn't help but miss the sappy pine smell of my mom's back home; the tattered felt blanket she draped around the base to cover the clunky, decades-old stand; the elaborate train set that choo-chooed around the presents, even though her grown-up children were too old to appreciate it.

In Barcelona, somewhere along the tracks where my mom's train would be chugging along, I discovered a log creature with a face and four stumpy legs. It smiled at me with a drawn-on mouth and plastic googly eyes.

"What the heck is that?" I asked Marc.

"Caga Tió!" he said — loosely, poop log. He explained how children are supposed to hit the smiling log with sticks, and then turrón candies magically fall out of it — that is, parents discreetly toss them underneath.

I had to give it to the Catalans — they didn't take themselves too seriously. Compared to the precious bûches de Noël (Yule logs) back in Paris, the Caga Tió felt somehow more familiar — the kind of tradition my mom would have completed with verve, assembling the perkiest, cleanest little poop log around.

I later learned that Caga Tió is a widely observed, sacred Catalan tradition. As Lindsay Patterson wrote for NPR, "The tradition of Caga Tió is bizarre to the rest of the world, but here [in Catalonia], imploring a log to poop candy with sticks and threats is as magical as waiting to hear the sound of sleigh bells on the roof of your house."

The thing is, all traditions are a little bizarre. To some, cutting down a beautiful living tree, dressing it up with lights and ornaments, and tossing it on the street (or over the back deck) afterward, might seem needlessly elaborate. But then again, it's hard to put a price on the joy I got as a kid when I went with my mom to Pier 1 Imports or the local Canal Towne Emporium and she let me pick out an ornament for the tree. I remember cradling the white square box, just big enough to hold a cupcake, until we got home and then, with the care of a surgeon, unfolding the wrapping paper and hanging my gold, glittery king (one of three — I'd have to wait until the next year to acquire another) on the tree.

I missed my mom's perfect tree and her Burning Man of gift packaging and even the Santa mafia, with their beady eyes and wooden teeth and distinct fashionable ensembles. They had, after all, taken years to collect — from pop-up holiday boutiques and many a HomeGoods January clearance sale. Some might consider them silly, but those were our Santas, and I'd defend them just as I would anyone in my family. You know how it goes: The privilege to mock is reserved for insiders.

Sometimes it takes experiencing other people's traditions, being an outsider, to fully appreciate your own. And so, I tried to be a good outsider that year. I cheered when the kids, armed with tiny twigs, beat the Caga Tió, and I threw turrón to the sound of their excited yelps for more candy.

Now, through marriage, I have become part of a large Mallorcan-French family. When we are in Mallorca, we munch on Mahón cheese and toasts spread thick with sobrasada while drifting around a faux tree draped in tinsel garland. The French side have their holiday traditions, too — like gathering in Normandy and feasting on fruits de mer. My mom joined us there one year. She couldn't believe the sheer quantity of food. "There's more?" she asked in disbelief. "Those were just the appetizers," I whispered, as one of Guillaume's aunts cleared plates piled with empty oyster shells. At the end of an hours-long lunch, the table littered with clementine peels, I watched my mom tell her stories in English, loud and with hand gestures, as though that might cut through the language barrier, Guillaume's family a captive audience even if they barely understood.

Then there's our apartment in Paris, where to date, I've decorated just one Christmas tree: a stout little evergreen affixed to a split log, as they sell them in Paris. (Despite its size, it was still a lot of work! I texted my mom afterward, asking how she did it every year. "It was fun," she replied.) I have yet to begin an ornament collection, but now that I'm a mom, I feel an instinctual desire to get started — to create for our daughter some memories of a perfect childhood tree.