Why we can't have a "meritocracy": We have no idea how to measure worth

Under current conditions of capitalism, our only measure of worth is wealth — which leads to worsening inequality 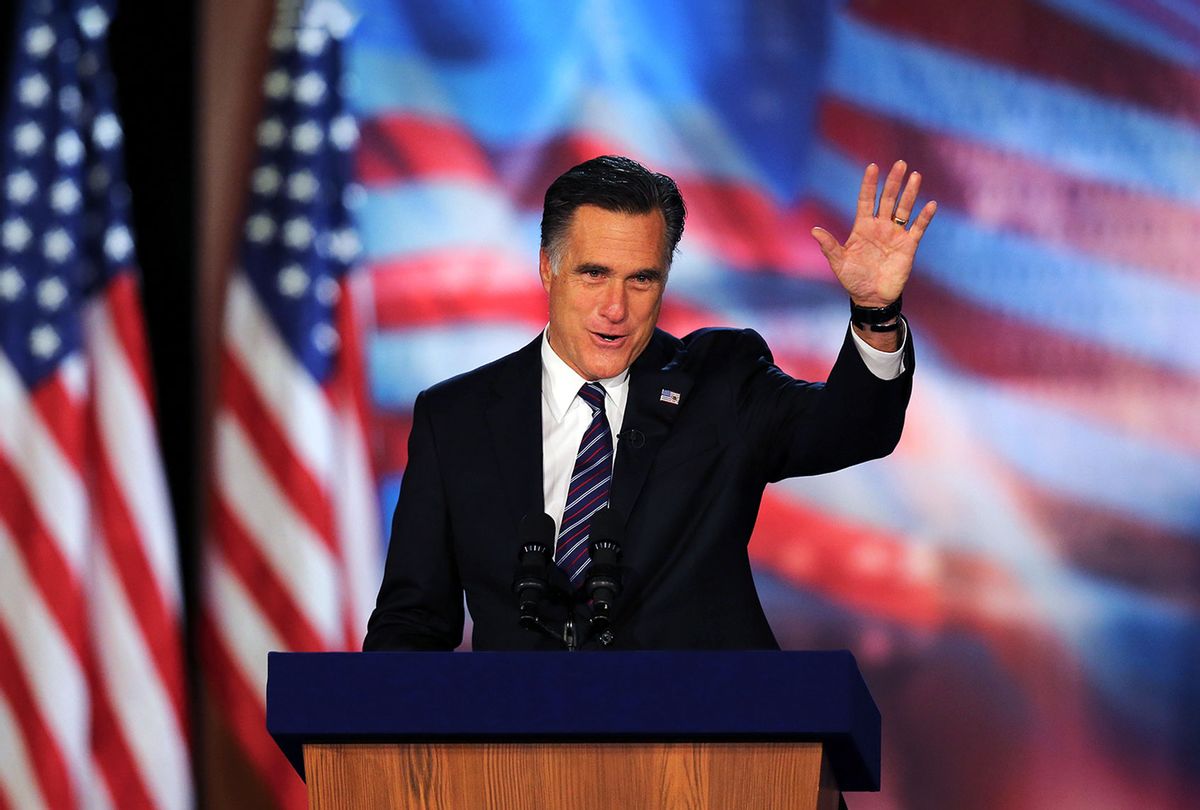 Republican presidential candidate, Mitt Romney, waves to the crowd while speaking at the podium as he concedes the presidency during Mitt Romney's campaign election night event at the Boston Convention & Exhibition Center on November 7, 2012 in Boston, Massachusetts. (Joe Raedle/Getty Images)
--

In 1999, NASA lost the Mars Climate Orbiter. The cause was later attributed to a measurement error. Whereas one team working on the project had used traditional U.S. measurements (inches and feet), another had used the metric system.

This same measurement problem plagues our attempt to assess the worth of economic actors in our supposed meritocracy, the pursuit of which was best expressed in 2011 by then-presidential candidate Mitt Romney. In a "merit-based society," Romney explained, individual gain comes from hard work and not as a birthright, whereas in an "entitlement society" the fruits of one's labor are redistributed to others. This definition underpinned his commitment to free-market capitalism (which he considered merit-based) as opposed to the welfare state.

Apart from the obtuseness of the attributions from a candidate who also proposed eliminating the estate tax, Romney's merit-based society contains a fundamental flaw. It requires a common measure of merit, which we lack.

Of course we are told that capitalism gives everyone what they deserve.  Money then becomes the measure of merit. Romney said as much when he claimed that the one percent was composed of the most successful and that those who complained about them simply sought to punish their success out of envy.

RELATED: Why Americans hate and fear the poor: Joanne Samuel Goldblum on the price of inequality

Moreover, money is not the common standard that it seems to be. This is because there are two different ways of earning it. Capitalists benefit from portfolio income, which is timeless, spaceless and potentially limitless. Other people don't.

Owners' income is not limited to the labor that they alone put into an enterprise, which is bound by space (a person can only be in one place at any given moment) and time. Instead, owners get the profits produced by their entire labor force. They earn when anyone in the enterprise is working. They thus earn from multiple bodies in multiple spaces. They can simultaneously earn in Tulsa, Phoenix, Richmond, Paris, and Bangkok. They can also earn round the clock. They can earn while they are eating or sleeping. They can earn while they are watching a movie or reading a book. Their earnings, then, are divorced from their person — from their labor and from their bodies in space and time. They have broken through these limits. Their earnings are spaceless and timeless.

Moreover, capitalists can pass these benefits on to heirs, who need do nothing to receive the privileges. That is the true meaning of entitlement. It refers to those who hold the titles. (Duke and count were hereditary titles that came with property. If you have the title to your car, you own it.) Obviously, the poor don't "own" food stamps in the same way. Thus, we misapply the word entitlement when we refer to government programs for the poor, who almost by definition do not own.

Though heirs to capital may choose to work, it is not a requirement for receiving the profits of inherited property. Instead, they continue to be compensated for work that has already been compensated and that was performed by a dead predecessor. These heirs can then pass the same privileges down to their progeny and on and on, continuing to compensate new generations for work that has been repeatedly compensated and that was performed by ancestors increasingly far removed from the beneficiaries. Thus, capital earnings are potentially limitless.

Workers, however, benefit from none of these privileges. Their incomes are limited to what their own bodies alone can do in space and time. Nor can they pass the rights to their paychecks down to heirs who continue to be compensated for their labor through the generations. In fact, workers may produce the fortunes of heirs who may never have worked.

Moreover, workers' income is a function of supply and demand, which is a relationship of power (few workers = market power, while many workers = weakness) and not of merit. Think of miners during the Industrial Revolution, who worked long and hard, took tremendous risks and produced something fundamental to the economy, yet lived in poverty. Workers compete against one another in a game of economic limbo. Capital watches to see how low they can go. To win the privilege of work, they must go low. As a result, their incomes can stagnate or decline even as productivity and profits rise.

When we take money as the measure of merit, then, we compare apples to oranges (or inches to centimeters). It's as if we were judging the merits of athletes based on high scorers; Kareem Abdul-Jabbar was a success, but Tiger Woods is a loser. When we add inheritance to the mix, of course, the money measure becomes even more distorted. At least in sports, successful athletes cannot pass their points down to progeny.

Moreover, any exogenous factor that exacerbates the difference between the earnings of capital and labor simultaneously expands the "merit" of the former and diminishes that of the latter. Globalization and mechanization have done just that. They have expanded the number of employees whose labor benefits capital and thus also the pool of potential workers (including robots), which undercuts their market power. Tiger Woods falling even farther behind, in relation to LeBron James.

If we are going to pursue a genuine merit-based society — one founded on hard work and not birthright — we must begin by developing an accurate measure of worth. Without it, we will never know if we have the society we seek.

Read more on the true costs of inequality:

Mary Barker is a political scientist with a Ph.D. from Columbia University as well as a published author. She is currently writing a Mormon version of liberation theology, an explanation of which can be found on her website.