"Handing someone a lasagna feels like the exact opposite of limply saying, 'I’m so sorry that happened'" 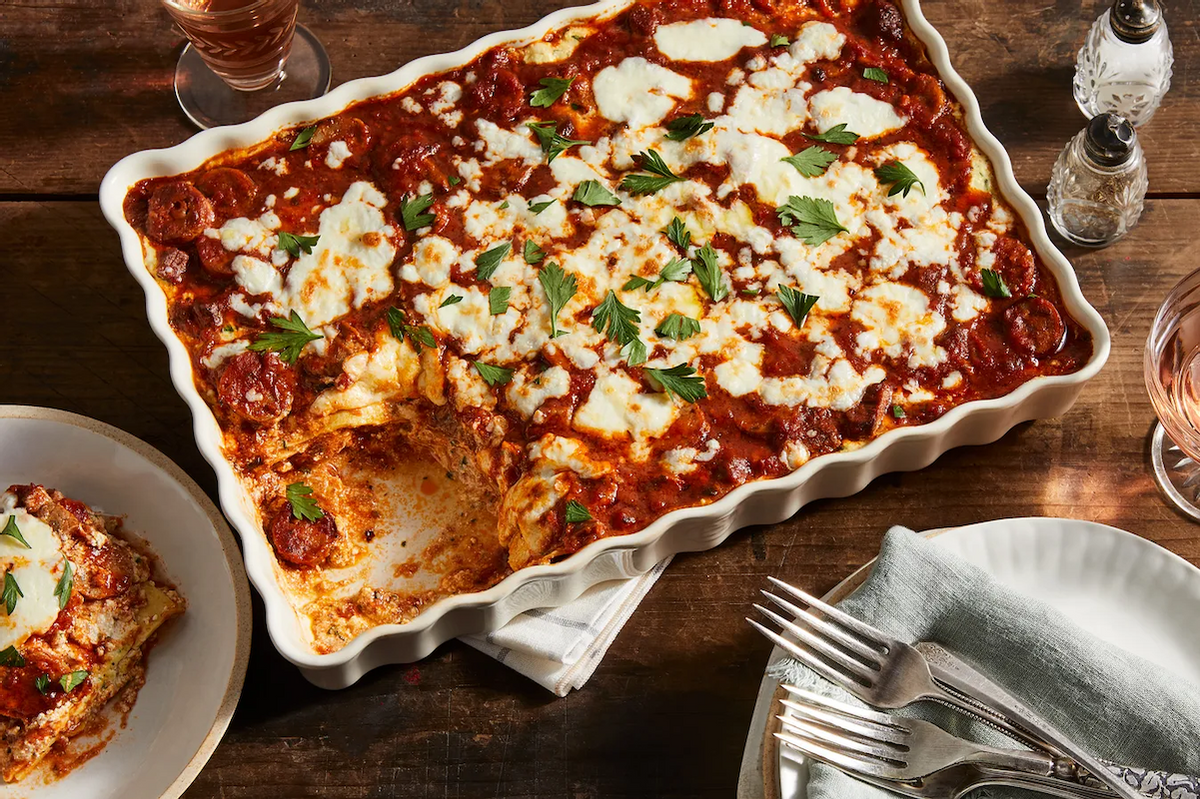 Lasagna, like all baked pastas, is a dish that suggests being warm inside on a cold day. It is the kind of food that numbs pain and softens edges, turning a sharp and bitter world toward small, sense-based pleasures. The blurring effect of heavy carbs on the nervous system is much the same as a blasting radiator. And in a certain kind of cold weather, sometimes it's hard to know if food is actually good, or just warm. Baked pasta is almost always both, but sometimes the temperature matters as much as the taste. That warmth itself, as a key ingredient in baked pasta, points to how these dishes act as a material form of unconditional love.

I started making lasagna, mac and cheese, baked ziti, and other variations on the theme about a year ago, during an uncertain fall that chilled into an oppressive winter. I love cheese and pasta and always have, but I hadn't made them myself all that often until 2020. It seemed like these sorts of dishes required an occasion, a big family holiday with a heaving table. Dare I make one in my own home, on any normal day of the year, just because I wanted to show someone I loved them, or feel like I was loved? Just because I wanted the brain-smoothing comfort of a vat of pasta and cheese? I dared.

Cases were rising and the weather turned. The green hope and anger of the summer receded, replaced by a slow-burning late afternoon dread. Leaves fell off the trees and branches made skeletons against the sky, and when I saw friends we went home early, shivering in scarves and gloves. We took grim, brisk walks through a city turning rapidly gray and brown, aging into the end of the year. My fingers froze and my toes ached in my boots. I came home wanting comfort, wanting something large and mindless to embrace me until I was warm again.

Sometimes, when I got to my apartment, I would immediately put myself into the bathroom, turn the hot water on as high as it would go, wrap myself in a towel, and sit there in the steam, marinating in a little at-home sauna for 15 or 20 minutes before actually getting in the shower. The shower sauna was wasteful and indulgent, but sometimes it was the only thing I looked forward to all day, the thing that got me through whatever was colder or sadder or worse outside. The shower sauna was, in some essential way, a baked pasta. It offered the same thing externally that a baked ziti, fresh out of the oven and heavy with mozzarella, offers internally on a cold night.

It's not just the carbs and cheese that makes these dishes as comforting as they are. On Election Day, I made the most complicated lasagna I had ever heard of. A recipe from the "Dean & DeLuca Cookbook," this sage, mushroom, and smoked mozzarella version had been recommended to me years ago by a close friend, but I had never attempted it. I'd thought about it all the time, ever since she'd told me about it, and I'd even ordered the cookbook (a glorious relic from the mid 90s that was out of print but easy to find online), weighty and self-important as a paving stone. I kept meaning to make the lasagna, but I never did, too intimidated by all the steps and by the prospect of buying four different kinds of mushrooms.

But on Nov. 3, I had no work obligations, and my husband had signed up to be a poll worker, which meant he would be gone from 6 a.m. to 10 p.m. I had 16 hours with nothing to do but try not to obsessively refresh Twitter (I failed spectacularly). A friend and I took a huge walk in the cold, and then I came home, with bags of mushrooms and big pasta plans.

Reading the recipe this time, the intimidatingly fussy directions became a balm: I was told to use "the deepest-tasting wild mushrooms you can find," and that "the thinness of the cut [of the mushrooms] is what gives the dish its delicacy." Not to mention the whole separate note where the author lets you know that you can use store-bought noodles if you really must, but you probably should think less of yourself for doing so — instead of being annoyed, I only wanted to fall in deeper. Here was a container into which I could pour my brain and let it relax into a goo. No thoughts, only mushroom slicing. The instructions took enough focus that there was no room for anything else. The lasagna, with its thick layers of cheese and béchamel and noodles, would sit on my anxious mind like a weighted blanket; its warmth would convince me of the presence of love and kindness in the menacing world beyond my small, overheated kitchen. The deliciousness of the whole thing — gooey cheese and funky-earthy mushrooms and silky cream sauce — rooted me back into my body, diverting my focus from analytical worry to pure psychic sensation. But even before that, the recipe's repetition turned everything else into white noise, scrubbing out anxiety for a blank focus.

Making this lasagna doesn't require much technical expertise, but it is difficult in the way of having to do a lot of small tasks at great repetitive volume, and time them correctly, over many hours. It involves slicing several pounds of mushrooms very thinly, which itself took me nearly two hours. The slicing is followed by sautéing those mushrooms in batches, then making a cream sauce, par-boiling and arranging the noodles, and then stacking everything together.

Completing each step required all the mental energy that might otherwise have been spent on worry that day. Many other lasagnas aren't as fiddly, as fancy, or as time-consuming as this one — and baked zitis, well, for some, you just toss the whole mess together and pop it into the heat — but they all have this brain-smoothing quality. The genre is a whole-attention endeavor, with its multiple vessels, steps, and large volume of ingredients. At the same time, it does not require the kind of anxious awareness demanded by other dishes, ones less forgiving of sloppiness and more concerned with precision. It does not really demand intelligence, which is part of the relief it offers, the thing about it that feels like love. I turn my brain off, and make a huge vat of warm pasta and cheese, and both the act of preparing and eating feels like one long shower sauna.

An old friend of mine, someone I love very much, is very sick right now. I can't do much about it; there isn't even much to be said. But what I can do is make a lasagna, and maybe also a mac and cheese, and maybe a ziti, too, and bring it over to their apartment. Baked pastas are the native food of grief, and of unconditional love. They freeze well and are simple to serve; they're an easy and useful gift to bring to friends who are grieving, who are taking care of sick loved ones, who are going through anything difficult. Baked pasta can be eaten over weeks or months, and is a solution on a day when there's no time to cook, or when you've forgotten to eat — a gift that really does keep on giving.

But there is also something about the warmth and substance of it, the simple volume of the dish, the weight of it in hands. A hefty dish of lasagna feels permanent. Handing someone a lasagna feels like the exact opposite of limply saying, "I'm so sorry that happened." It is heavy enough to act as an anchor. Many of us, certainly myself included, often feel like we will never have enough, and like the things that we have are liable to be taken away at any moment. Sickness, loss, and all the unforeseen tragedies that cut through a life exacerbate those feelings. Baked pasta is a salve for this sense of scarcity. It says that there is always enough, and that you do not want too much. It says you can have as much as you need, and that if you want more, there will be more waiting for you. It says that you can always be held. A baked pasta dish recently out of the oven (better yet, reheated), decked out in molten crisped cheese, gooey but with enough substance to bite down and chew on, is a warm room on a frigid day. It envelops mind and body, and counteracts the chill of the harsh larger world.

Grief often feels so empty-handed, such a stupid, useless bystander's stance. There is so little to do when things go wrong, when losses arrive out of nowhere, when people get sick, or die, when others experience loss. But preparing — and then gifting — baked pasta is something real and concrete to offer. It is something I can actually do. For the time I'm making the dish, that empty-handed worry dissolves, and there's just cheese and pasta and warmth, chopping and measuring. The numbing comfort of small tasks balances out the useless sense of being able to offer nothing. Here, I can offer this, I made you a lasagna.

Recipe: Grief, With a Side of Baked Ziti