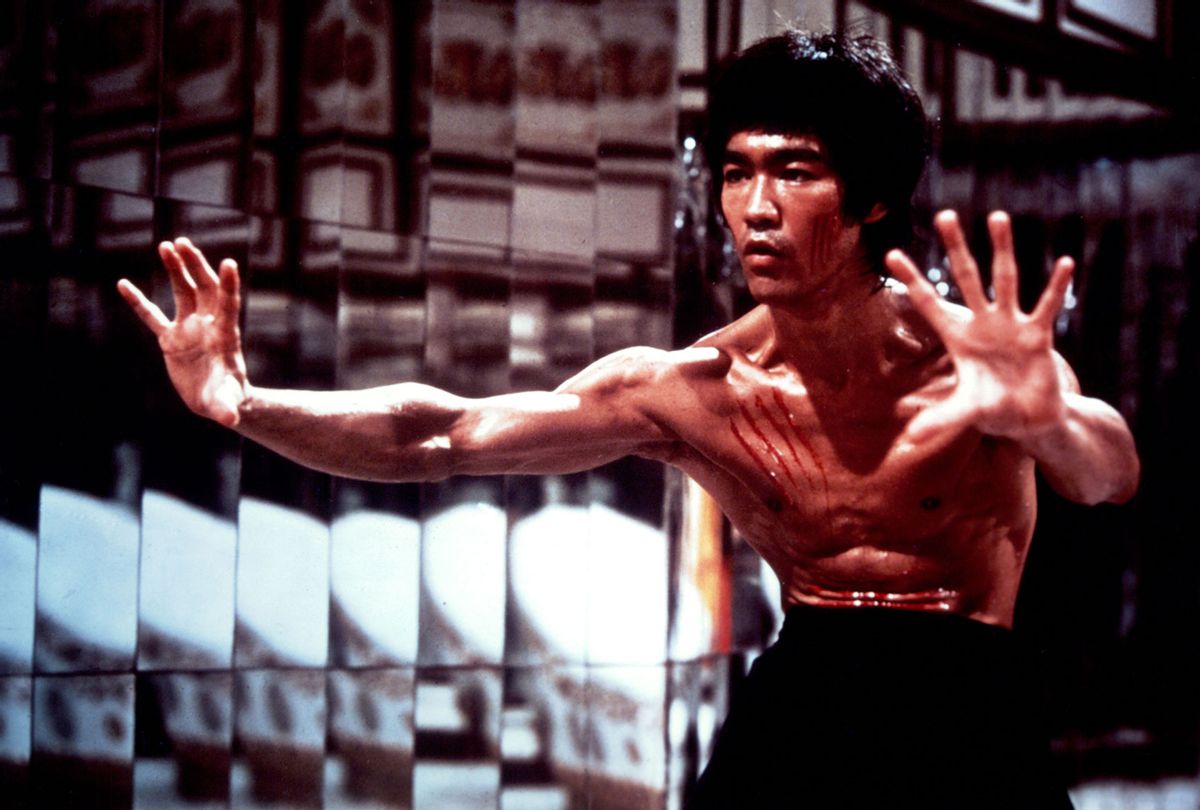 Bruce Lee is one of pop culture's most multifaceted icons. Legions of fans admire him for his movies, his martial arts prowess, his incomprehensible physical fitness, his championing of Chinese culture, and even his philosophies on life. Yet for all the new ground Lee broke, most of his recognition only came after his death at the age of 32. Read on to learn more about the life of this profound, if enigmatic, superstar.

1. Bruce Lee's first starring role in a movie came when he was just 10 years old.

In 1950's "The Kid," a pre-teen Bruce Lee played the role of Kid Cheung, a streetwise orphan and wry troublemaker, based on a comic strip from the time. Starring opposite Lee, playing a kindly factory owner, was his father, Lee Hoi-chuen, who also happened to be a famous opera singer. (Bruce Lee was actually born in San Francisco while his father was there on tour; Lee would move back to the U.S. in 1959).

According to Lee biographer Matthew Polly, the movie was a big enough success in China to earn sequel consideration. There was just one problem: A young Bruce Lee was getting into fights at school and out on the streets, so his father forbid him from acting again until he straightened up — which, of course, didn't wind up happening.

2. Bruce Lee was deemed physically unfit for the U.S. Army.

While he may have walked around with body fat in the single digits and could do push-ups using only two fingers, Lee still managed to fail a military physical for the U.S. draft board back in 1963. Despite being an adherent to physical fitness all his adult life, it was an undescended testicle that kept him from fighting for Uncle Sam in Vietnam.

Long before he was known for breakneck fight choreography, Bruce Lee's physical skills were focused on the dance floor. More specifically, the cha-cha. In Polly's book, "Bruce Lee: A Life," the author explains that the dance trend made its way from Cuba through the Philippines and soon landed in China. And once the cha-cha settled into the Hong Kong social scene, it didn't take long for youth dance competitions to spring up. Lee had been taking part in cha-cha dancing since the age of 14, and in 1958, he won the Crown Colony Cha-Cha Championship. Foreshadowing his later dedication to martial arts, Lee would keep crib notes of all 108 different cha-cha steps in his wallet so that he could obsessively memorize them.

4. Bruce Lee refused to lose a fight to Robin.

"The Green Hornet" aired its first episode in September 1966, with Bruce Lee as the Hornet's (Van Williams) lightning-quick sidekick, Kato. The series would immediately be compared to "Batman," ABC's other costumed crime-fighting show, and it wouldn't be long before a two-part crossover episode was in the works. And as heroes do, before they teamed up, they first had to fight each other. According to "Newsweek," since "Batman" was by far the more popular show, the script featured a fight between Burt Ward's Robin and Bruce Lee's Kato that was set to end with the Boy Wonder getting the upper hand. But who would really buy that?

Well, Lee certainly didn't — and he knew no one else would, either. Williams later recalled that Lee read the script and simply said, "I'm not going to do that," and walked off. Common sense soon prevailed . . . sort of. The script was rewritten to change the ending — not to a Kato K.O., but to a more diplomatic draw. Though "The Green Hornet" was Lee's first big break in the United States, the series itself lasted only 26 episodes.

As Bruce Lee worked to become a big-screen heavyweight, he made a living as a martial arts trainer to the stars. Among Lee's students were Steve McQueen, James Coburn, James Garner, Roman Polanski, and Sharon Tate. For his services, Lee was known to charge about $275 per hour or $1,000 for 10 courses. McQueen and Coburn grew so enamored with Lee over the years that they remained close friends until his death in 1973, with both men serving as pallbearers at Lee's funeral (alongside Chuck Norris).

In addition to providing Roman Polanski and his wife Sharon Tate with kung fu lessons, Bruce Lee also lived near the couple in Los Angeles when Tate and four others, including Lee's close friend Jay Sebring, were murdered by the Manson Family in August 1969. It would be months before the Manson Family was arrested for the murders, but in the meantime, according to an article from "Esquire," Polanski had grown obsessed with finding a suspect, looking for potential perpetrators even amongst his own inner circle.

During one kung fu lesson in the months after the murders, Lee had mentioned to Polanski how he had recently lost his glasses, which immediately piqued the director's interest. A mysterious pair of horn-rimmed glasses had been found at the murder scene near his wife's body, after all. Polanski had even purchased a gauge to measure the lenses and find out the exact prescription so that he could do his own detective work, according to The New York Post.

The director, without giving himself away, offered to bring Lee to his optician to get a new pair — this would allow him to hear Lee's prescription firsthand and determine if the specs discovered at the crime scene belonged to him. It turned out Lee's prescription didn't match, and Polanski never told his friend about his suspicions.

Bruce Lee brought an impeccable physique to the screen that was decades ahead of its time. But because his roles required so much physicality, he would be drenched with sweat while filming. And apparently, the martial arts pioneer loathed the sweat stains that would show up on his clothing as a result. His solution? In 1973, Lee actually underwent a procedure to surgically remove the sweat glands from his armpits to avoid the fashion faux pas from showing up on camera.

Bruce Lee's death at the age of 32 on July 20, 1973, was officially ruled the result of a cerebral edema, or swelling of the brain. Lee had complained about headaches on the day of his death, and was given a painkiller by Betty Ting Pei — an actress who claimed to be Lee's mistress — before lying down for a nap. He never woke up.

Though many reports at the time suggested Lee had an allergic reaction to an ingredient in the painkiller, Polly points to a mystery that began on May 10, 1973, when the star previously collapsed in a hot recording studio while dubbing new dialogue for "Enter the Dragon."

In Polly's opinion, Lee's collapse had to do with heatstroke, since his stint in an overheated recording studio was compounded by a lack of sweat glands that prevented his body from cooling off naturally. Heatstroke can also cause swelling in the brain, much like was found during Lee's autopsy. And Dr. Lisa Leon, an expert in hyperthermia at the U.S. Army Research Institute of Environmental Medicine, told Polly, "A person who has suffered one heat stroke is at increased risk for another" and that there may be long-term complications after the initial incident.

At the time of his death, Bruce Lee was involved in numerous projects, including the movie that would become "Game of Death," his next directorial effort. According to "Vice," there wasn't much completed on the film by the time of Lee's passing — there were some notes, a story outline (which simply read "The big fight. An arrest is made. The airport. The end."), and 40 minutes of footage, including Lee's now-iconic fight against NBA great Kareem Abdul-Jabbar.

Usually, a project in that situation would just be a lost cause, but production company Golden Harvest wanted to salvage what they could, so they hired "Enter the Dragon" director Robert Clouse to put together . . . something. The result was a Frankenstein's monster of a film, comprised of 11 minutes of existing footage Lee shot, overdubbed clips from his previous movies, and stand-ins to fill out certain scenes. The director even resorted to using an unfortunate Bruce Lee cardboard cutout to complete one shot.

That's not even the top rung on the ladder of poor taste: When the movie called for Lee's character to fake his death, they used footage from his actual funeral to realize the scene, complete with waves of mourners, pallbearers, and closeups of Lee's open casket.

10. Bruce Lee's posthumous success resulted in its own sub-genre.

Lee's career was exploding in China and gaining momentum in the United States by 1973, but he passed away just a month before his biggest hit was released: "Enter the Dragon." The movie, which grossed more than $200 million at the worldwide box office, catapulted the late Lee to icon status. But with the star himself no longer around to capitalize, there would soon be a wave of knockoff films and wannabes looking to take advantage of the martial arts craze.

Both affectionately and derisively known as "Bruceploitation" films, this strange sub-genre of martial arts cinema gave life to z-movie oddities like "Re-Enter the Dragon" and "Enter the Game of Death," starring the likes of — and we're not kidding — Bruce Le and Bruce Li. Jackie Chan was even roped into a few of these movies, like 1976's "New Fist of Fury." In 1980, Bruceploitation even went meta with "The Clones of Bruce Lee," starring Dragon Lee, Bruce Le, and Bruce Lai, who play genetic reconstructions of the late actor after scientists harvest his DNA.