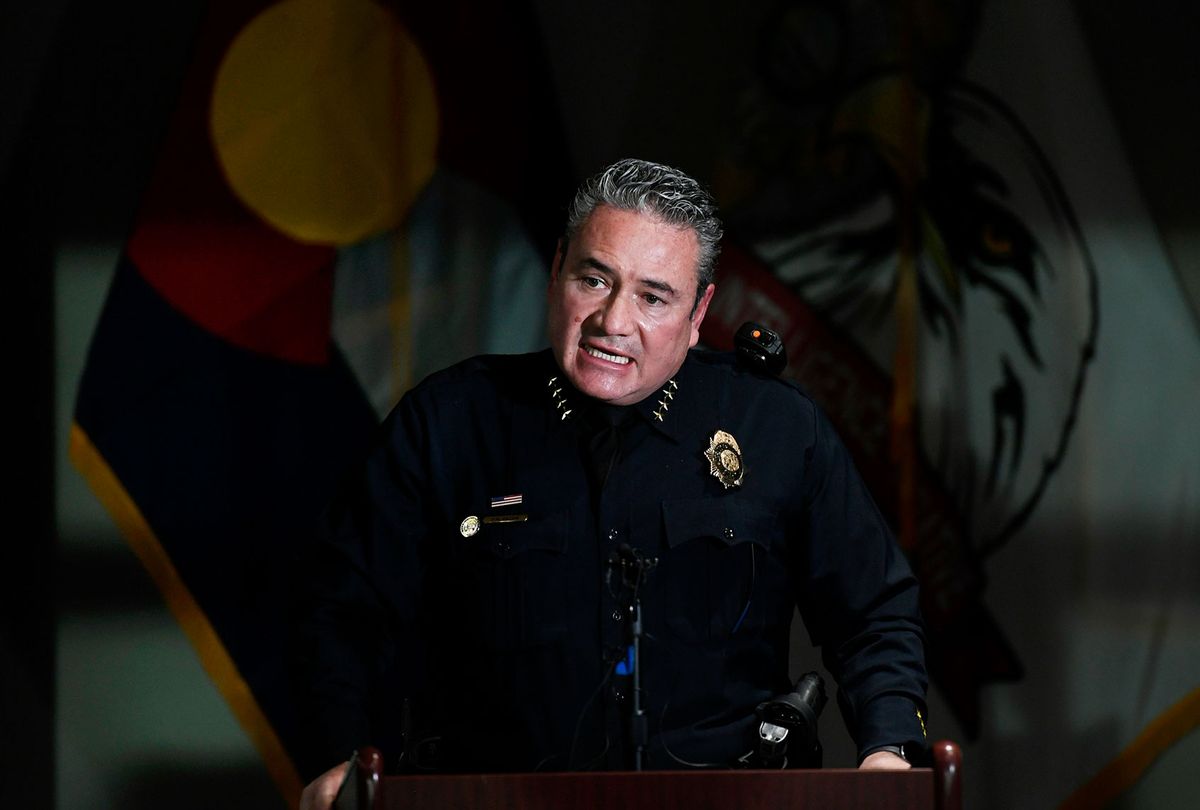 Denver Police Chief Paul Pazen addresses members of the media during a press conference at the Lakewood Police Department on December 28, 2021 in Lakewood, Colorado. Police gave updated information on the shooting spree that spanned across two cities, Lakewood and Denver, and claimed the lives of five people and injured three people including a Lakewood police officer. Police have identified the shooter as Lyndon McLeod, 47, and said he knew many of the people he targeted. McLeod had previously been investigated by law enforcement in 2020 and 2021 but that the investigations did not lead to state or federal charges, Denver police Chief Paul Pazen said. (Helen H. Richardson/MediaNews Group/The Denver Post via Getty Images)
--

Lyndon McLeod, 47, was fatally shot during a gunfire exchange with an officer after killing five people and wounding three others during a "shooting spree" that spanned four different locations, police said.

Police said they investigated the suspect last year and earlier this year in separate incidents but did not arrest him.

McLeod appears to have written about "alt-right philosophies," masculine supremacy and targeted violence against the "weak" online, according to the Daily Beast, where he used the alias Roman McClay to operate a "plethora" of social media accounts and release three books about a character named Lyndon McLeod who "commits 46 murders." He cited the books while criticizing a "weak" reporter who was confronted by boxer Mike Tyson in a 2014 YouTube video.

"This is basically the plot to my stupid book. Our entire society is made up of shitty little fucks who insult badasses & get away with it because law enforcement & social norms protect the WEAK from the STRONG. I'm over it," he wrote. "The weak better buckle up ... shit is about to get real."

Gabriel Thorn, a man who bought a home from McLeod five years earlier, told local news outlet KDVR that "there were numerous hidden gun safes in the walls."

"He just disappeared off the face of the earth when we bought the house," Thorn said. "My wife and I joke that he's changed his name and moved out of the country."

McLeod knew all his victims through business or personal relationships and likely targeted all of his victims, police said at a press conference Tuesday. The suspect first targeted a tattoo parlor in Denver, where he killed two women, including the shop's owner, and injured a man, according to The Denver Channel.

McLeod then opened fire at a location where he previously owned a tattoo shop as recently as 2017, according to ABC News, but no one was injured. McLeod then burglarized two homes, where he killed another man, according to police.

Police were able to track down the suspect's vehicle after the third shooting.

"Denver police officers identified a vehicle associated with this incident. There was a pursuit that ensued," Pazen said. "There was an exchange of gunfire between the individual, the suspect here, and our officers."

Pazen said that no one was injured in the exchange but the suspect disabled a police vehicle and fled to the nearby suburb of Lakewood. Lakewood Police responded to a shooting around 6 p.m. where the department said a person was killed at a tattoo parlor. Lakewood Police found the suspect's car at a shopping center, where he opened fire on police and fled to a hotel. The suspect shot a clerk at the hotel and shot and injured a female officer while fleeing the facility. The officer fired back, killing the suspect.

The FBI and the Bureau of Alcohol, Tobacco, Firearms and Explosives are assisting with the investigation and police are appealing to the public for additional information.

"We need to dig in and find out what the motive was behind this," Pazen said.

Read more on the danger of right-wing extremism: