24 of the coziest dumpling recipes, from pierogi to gyoza

Reward yourself with alllllll the little pockets of joy 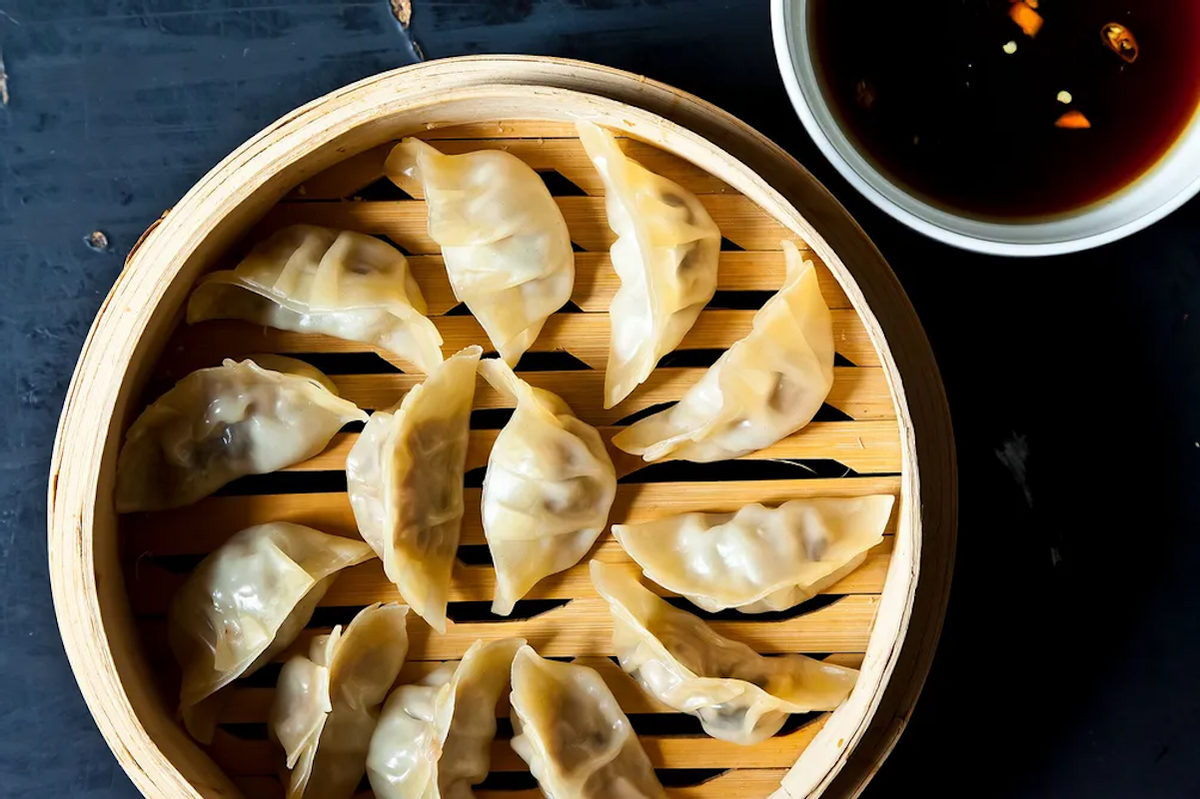 Lunar New Year is just about here: It's the time for food, family, and traditions. And . . . dumplings. Because what better way is there to celebrate? Indeed, in Chinese culture, jiaozi, or steamed dumplings, are typically folded and eaten on New Year's Eve; they're said to symbolize luck and prosperity for the year ahead. They also symbolize deliciousness.

I, myself, am an equal-opportunity dumpling eater, year-round. But for some reason, making dumplings at home has never really occurred to me, but it's actually the perfect weekend project. It's a time investment, sure, but so are those sweet rolls I made this past spring, and that homemade whole-wheat tagliatelle. And there's a huge upside: At home, I can put just about whatever I want in them, steam or fry them exactly to my preference, and freeze them for whenever a dumpling craving hits (they'll probably run out soon). Best of all, dumpling-pleating seems like possibly the most therapeutic kitchen task imaginable, and I could always use a little chill.

So in the spirit of good luck and prosperity this Lunar New Year and beyond (and a satisfying weekend project, to boot), I'm happy to present 32 top-notch dumpling recipes: from pierogies to ravioli, gyoza to samosas.

Suzanne D'Amato, interviewed practically her whole family tree to reverse-engineer her Babcia's potato–cheese pierogi recipe. And boy, are we glad she did. Try these boiled or pan-fried in butter, and topped with more butter and cool sour cream.

These spicy and sweet fried dumplings are a head-scratcher — in a good way. They're filled with a paste of nutty sesame seeds, chile, jaggery (a type of natural cane sugar), and salt, and deep-fried till they're golden brown and puffed up. The fried dough exterior gets even crispier as it cools, an important incentive if you're anything like impatient ol' me (RIP roof of mouth).

Speaking of the burnt roof of my mouth, these shrimp and chicken consommé soup dumplings are another extremely tasty culprit — and also a pretty special project. Community member and recipe developer Kenny Lao even teaches a whole class on how to make these little babies! Luckily for us, Kenny breaks down the whole process here.

These knishes are part onion-y mashed potatoes, part everything bagel, and entirely delicious. Definitely freeze some, unbaked, for a rainy day (or, you know, tomorrow).

These pork pot stickers, the "gold standard of dumplings," come from a legendary cook and beloved grandmother known as Popo. While Popo was known to make about 100 at a time, the recipe here makes 50 (but nobody's saying you can't double it).

If you've never had a pasty (pronounced like "nasty," though they're instead extremely "tasty"), they're a type of hand pie originating in Britain. This collard, cheese, and chorizo version has our name all over it (and is adaptable for vegetarians, if that's how you roll).

Here's another lamb dumpling recipe hailing from the Middle East — but with a twist. Here, the filling is stuffed into wonton wrappers, and served with a zingy grated cucumber and rice vinegar dipping sauce that's slightly reminiscent of East Asian flavors.

Pork, shiitake mushrooms, and scallions are pretty epic foods on their own. But combine them all together and stuff them in tender gyoza wrappers? We'll be back with you soon, as soon as we've finished making our batch. (PS: This one's great to make with kids, who can lend their tiny hands to the pleating party!)

Oh, hi, hello, didn't see you there. Was too busy drooling over these herby burrata-stuffed ravioli, served in a umami-rich Parmesan broth, aka all that is holy in this world. These are great to make ahead — tackle the broth, the pasta, the filling, and the garnish either all at once or over the course of the weekend — and eat well for a while after that.

These Southeast Asian-inspired curry puffs are basically a handheld spicy chicken (or turkey) potpie — but they're also deep-fried, and I've never met a fried food I didn't like.

Puff pastry dough comes to the rescue! In these flaky samosas, it's the perfect, snuggly blanket around a curried-potato filling. My mom used to make a very similar dish growing up, and now I officially have no excuse to ask her to make it when I go home and visit.

Ravioli (technically casunziei, a similar Northern Italian dish), we meet again — missed ya! These beet-filled pasta pillows are pretty in pink and topped with a luscious pat of butter and a sprinkling of poppy seeds. You can use store-bought wonton wrappers if you're not looking to make your own fresh pasta (but if you're me, you're always looking to make your own fresh pasta).

These Argentine classics are stuffed primarily with spiced beef, and punchy accents like green olives, raisins, and spring onions play a supporting role. A tender beef-fat dough encases the filling, baking up to be super flaky and delicious. Make sure you blow on them extra carefully before you eat.

Community member Shveta Berry grew up eating this rich and tangy buttermilk stew with soft fried spinach dumplings — her mother would make "an enormous pot of it" and the dish would get better as the days passed and the flavors developed. Though these aren't stuffed dumplings, they absolutely qualify as little pockets of joy.

These spiced lamb dumplings were the winner of the "Your Best Dumplings" contest for good reason: they're simple, made with wonton wrappers; they're convenient, as they can be assembled in advance and frozen; and they're dang delicious. If you don't believe me, believe reader PaulaE: "I have made this dish at least 10 times now, and every single friend I've served it to has asked for the recipe. It's a real stand-out and a permanent part of my go-to repertoire."

This simplified take on classic pork dumplings (all hail premade gyoza wrappers and an unfussy, pleat-less folding technique) gets an extra boost from an equally simple, utterly delicious spicy dipping sauce. Freeze a double batch of the dumplings ahead of time and thank yourself later.

The dough in these traditional Lebanese dumplings is already super-intriguing, as it's made with ground cherry pits. But then the pine nuts, allspice, and cinnamon that join ground lamb or beef in the filling make an equally bold statement. Last, a refreshing yogurt-garlic-mint sauce tops it all off, bringing some lightness and brightness to all the heady spices.

Kind of like a bagel and lox, but . . . not. The hardest part about this recipe is the dumpling-shaping, thanks to ready-to-eat smoked salmon and store-bought gyoza wrappers. We'll gladly take the assist.

Another non-stuffed friend that's always welcome to our table. A light, cooling batter made with avocado creates a fluffy biscuit that's perfect for floating in a spicy, tomatoey broth.

Community member Yuko did extensive research to create this perfect dumpling hybrid: It's got a rice-and all-purpose-flour encasing, that's somewhere between a traditional shu mai wrapper and a fresh spring roll. It's also got ground pork, shrimp, lemongrass, and lots of bright herbs, and is served with a fish sauce dipping sauce — flavors that skew Vietnamese, but also hearken back to Cantonese traditions.

Shrimp, pork, onions, and scallions are tucked into these little parcels, which then make their way into a rich and warming chicken broth. Crispy fried shallots and garlic are listed as "optional" garnishes, but really, who's kidding themselves.

And now, for a little dessert dumpling action. Similar to Chinese steamed buns in texture (light and fluffy) and slightly sweet flavor (just two tablespoons of sugar in the dough), these pillowy yeasted dumplings are made better only by the tart-sweet blueberry compote on top. And if the word "yeast" sends you into a panic, know that this recipe is as simple as can be (just throwing stuff into a mixing bowl, kneading, then letting things rest), but you will need to set a bit of time aside to make it — a perfect weekend project, if you ask me.

Speaking of simple, these apple dumplings from Erin McDowell have all the flavors and appeal of a warm and comforting apple pie, but with a fraction of the time and effort. You'll lightly sweeten and spice whole Honeycrisp apples with cinnamon, nutmeg, and sugar, then swaddle it in pie dough and bake it in the oven. There's an optional apple cider caramel sauce to drizzle on top, too — but we all know it's necessary.

A simple filling of ground chicken, cabbage, and soy sauce (and OK, a few other aromatics) are tucked into store-bought gyoza wrappers, formed, and pan-fried until crispy. They're served alongside a three-ingredient dipping sauce.

Bet you never thought to make dumplings with your Thanksgiving leftovers, did ya? Leftover roasted turkey, Brussels sprouts, mashed potatoes, gravy — aka the whole feast — is mixed with fresh ginger, sesame oil, garlic, and soy sauce for a bite-sized version of yesterday's feast.

If you're looking for a creative use of leftovers, make dumplings! I know I just mentioned Thanksgiving leftovers, but these are more for your everyday leftover veggies like mushrooms, carrots, cabbage, and ginger. Recipe developer WoonHeng Chia also added tofu to the mix, but feel free to use ground chicken or pork instead.

If you're someone who prefers the filling in dumplings rather than the doughy wrapper, the popular Dim Sum snack known as Shao Mai are going to be right up your alley.

If you need me, I'll be on the couch, binging Succession, and eating every single one of these classic pork dumplings, which are pan-fried and served with spicy chile oil and soy sauce for dipping.

This recipe breaks down how to make empanada dough, shape them into individual rounds, and fill each one with braised spicy tomato brisket.

"Every country has their own renditions and fillings that span the range from savory, to spicy, to sweet. These are classic Cuban empanadas, filled with a minced meat filling called 'picadillo,'" writes recipe developer Sandra Gutierrez. Follow her step-by-step guide to making these popular Latin American snacks and you'll be frying them by the dozens in no time.

Good-quality pierogies are equally about the filling as about the dough. This classic iteration calls for potatoes, bacon, farmers' cheese (pressed cottage cheese), and a little bit of onion.