What would Middle-earth have looked like with Nicolas Cage as one of the Fellowship? 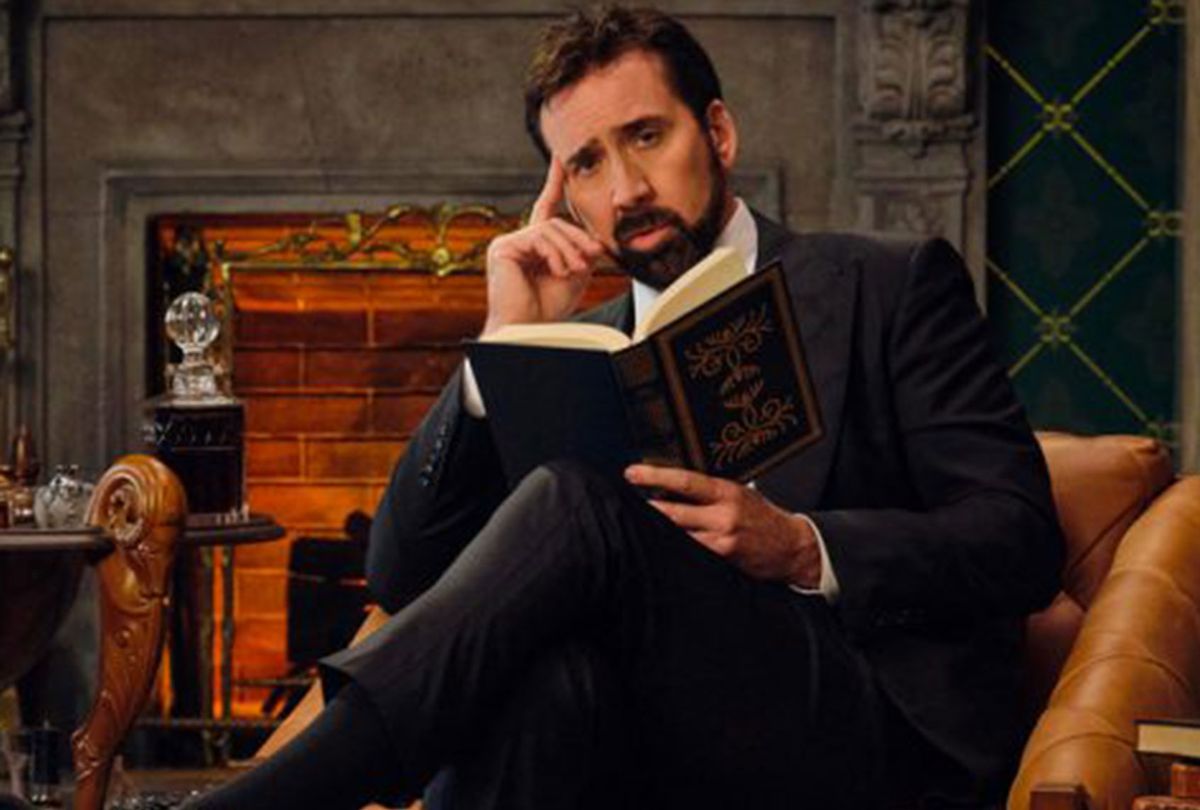 Nicolas Cage in "The History of Swear Words" (Netflix)
--

This year marks the 20th anniversary of the cultural juggernaut that is Peter Jackson's "Lord of the Rings" trilogy, which started with the release of "The Fellowship of the Ring" on December 19, 2001. The movies could have been a lot different, though, and not just because one executive apparently had Hobbit murder on the brain. Here are 11 actors who were almost cast in the blockbuster fantasy series

Technically, Stuart Townsend did make it to J.R.R. Tolkien's Middle-earth, in the sense that he was actually cast as Aragorn — and rehearsed and trained for two months — only to be let go the day before filming. According to Rings star Dominic Monaghan, who played Merry:

"We didn't get a chance to say bye to Stu [. . . ] We were all stunned. I didn't think we could get fired at that point. I thought you were in . . . but it wasn't the case. And Sean [Astin] said 'well, has he left the project or has he been fired?' And I think they were trying to protect Stuart as much as they could. They just said, 'We will let Stuart tell you that, but he's no longer with us.' We couldn't contact him. Email was very new at that point. He just disappeared."

Townsend finally addressed the matter in 2019, saying, "I have no good feelings for those people in charge, I really don't. The director wanted me and then apparently thought better of it because he really wanted someone 20 years older than me and completely different."

While Viggo Mortensen famously stepped into the role and speaks positively about the experience in the years after, he later admitted that he felt "awkward" about replacing Townsend at the last minute, adding, "I hear he's a nice guy and I am sorry that happened."

A sticking point for Townsend's version of Aragorn is that he was too youthful to play the grizzled, somewhat world-weary Ranger and future King of Gondor. In need of a new star for the franchise, Jackson turned to fellow New Zealander Russell Crowe. The actor confirmed in an interview with Howard Stern that the deal, had it come to fruition, would have given him 10 percent of backend grosses, i.e. about $100 million. But he was put off by a phone call with Jackson, where he got the impression the director "was forced into talking to me, because there was a moment in time when everyone wanted me in everything." Crowe continued, "I am talking to him on the phone, it is like, I don't think he even knows what I have done. I just knew that my instinct was that he had somebody else in mind, which turned out to be Viggo [Mortensen], and he should be allowed to hire the actor who he wants."

The role of Aragorn was also offered to a few more people. One of them — and someone who would have given the series a way different vibe — was the maestro of bonkers, Nicolas Cage. "There were different things going on in my life at the time that precluded me from being able to travel and be away from home for three years," Cage told Newsweek on turning down the part. "But the thing is about [movies I could have starred in], I can watch them. I can enjoy them as an audience member. I don't really watch my own movies. And so I genuinely do have the joy of watching these — especially with 'Lord of the Rings.'"

The final — but perhaps most enticing — actor who was seriously considered for Aragorn was Daniel Day-Lewis. Unfortunately, the feeling wasn't mutual on Day-Lewis's end. Jackson apparently offered him the role on numerous occasions, all of which were soundly rejected. The actor hasn't spoken about why he rejected the part, but he's on record about simply being uninterested in ever doing a big-budget blockbuster, no matter who's in the director's chair.

"[This is] not meant to belittle those films or the people [who work on them], because there are people that need to do those films and love to do those films — they can be fantastically entertaining for the people who love to see them — but it's not for me," the actor said about starring in blockbusters back in 2009. "When I'm working on something, if I'm intrigued by it, I'm never bored. I'm incapable of being bored. If I found myself working on a film and during the course of that work I was bored, because I didn't really know what the hell I was involved in, I would find that infinitely demoralizing and it might well make me decide to pack my bags."

Production company New Line Cinema offered Sean Connery between 10 and 15 percent of worldwide box office if he agreed to play the role of Gandalf, an amount that would have netted the actor somewhere between $150 and $225 million. Connery read the script and declined the role on the grounds that he didn't understand the complicated epic, later saying, "Yeah, well, I never understood it. I read the book, I read the script, I saw the movie. I still don't understand it. I would be interested in doing something that I don't fully understand, but not for 18 months."

Uma Thurman was offered — and turned down — the role of Éowyn, something she still jokingly considers "one of the worst decisions ever made." Still, it was understandable: Thurman had just had her first child, and she later told Stephen Colbert on "The Late Show" that she was "a little housebound" at the time. Referring to the 18-month shoot, Thurman said, "It was a little unknown for me, but it's really definitely a regret."

In the "Lord of the Rings," Éowyn ends up with Faramir, the younger brother of Fellowship member Boromir and eventual ally of Gandalf and the Fellowship. Up for the role of Faramir was Thurman's then-husband Ethan Hawke. "Ethan was a huge fan of the books and was very keen to be involved," Jackson recalled. "Uma was less sure and rightly so, because we were revising how we saw Éowyn's character literally as we went. In the end, Ethan let it go — with some reluctance."

In casting Bilbo Baggins, Ian Holm had a big leg up due to the fact that Jackson admired his prior performance as Frodo Baggins in a "Lord of the Rings" radio adaptation. Runner-up for the role was "Doctor Who" star, Sylvester McCoy. He bears no ill will for being passed over, telling Den of Geek, "To be in the company of Ian Holm was wonderful." In any case, McCoy made his way into the Tolkienverse years later, when he was cast as Radagast the Brown in "The Hobbit: An Unexpected Journey."

Add Christopher Plummer to the list of actors who were down for a role in "Lord of the Rings" . . .  except for that whole "having to be in New Zealand for ages" thing. Plummer was offered the role of Gandalf, but declined, later telling Conan O'Brien, "I don't know why I turned it down. I thought, maybe, three or four years in New Zealand, [I thought there] are other countries I'd also like to visit before I croak!"

Sam Neill, along with a whole passel of actors, was also considered for the part of Gandalf before it eventually went to Ian McKellen. (Though it's hard to imagine anyone other than McKellen as Gandalf now, even that casting was touch and go for a bit, due to scheduling conflicts with his role in the X-Men franchise.) New Zealander Neill said in a 2001 interview that Jackson "did offer me a role in 'Lord of the Rings,' but unfortunately, I was unable to do it because I had other commitments. I'm very fond of Peter and I'm very keen to work with him. When he makes 'Lord of the Rings 7,' I'm up for it."

Actor Kevin Conway, whose long career in film and TV has included such projects as "The Quick and the Dead," "The Good Wife," and "The Outer Limits," was offered the role of Théoden, but turned it down because of the long production schedule. Though Théoden is "a wonderful part," he said, "[they] wanted me to go out in January to New Zealand for six weeks, then go home, then go back again for another six weeks, then go home again and then come back again for three months. I said, 'Whoa!' The character is in two of the films. It wasn't worth it. He has a couple of good scenes, but the rest is all battling with armor and stuff. You could have a stuntman do that, which they probably would have done anyway. But I really suffered about it."

List Mental Floss Movies The Lord Of The Rings