No. 7. Dog grooms get some unusual style requests 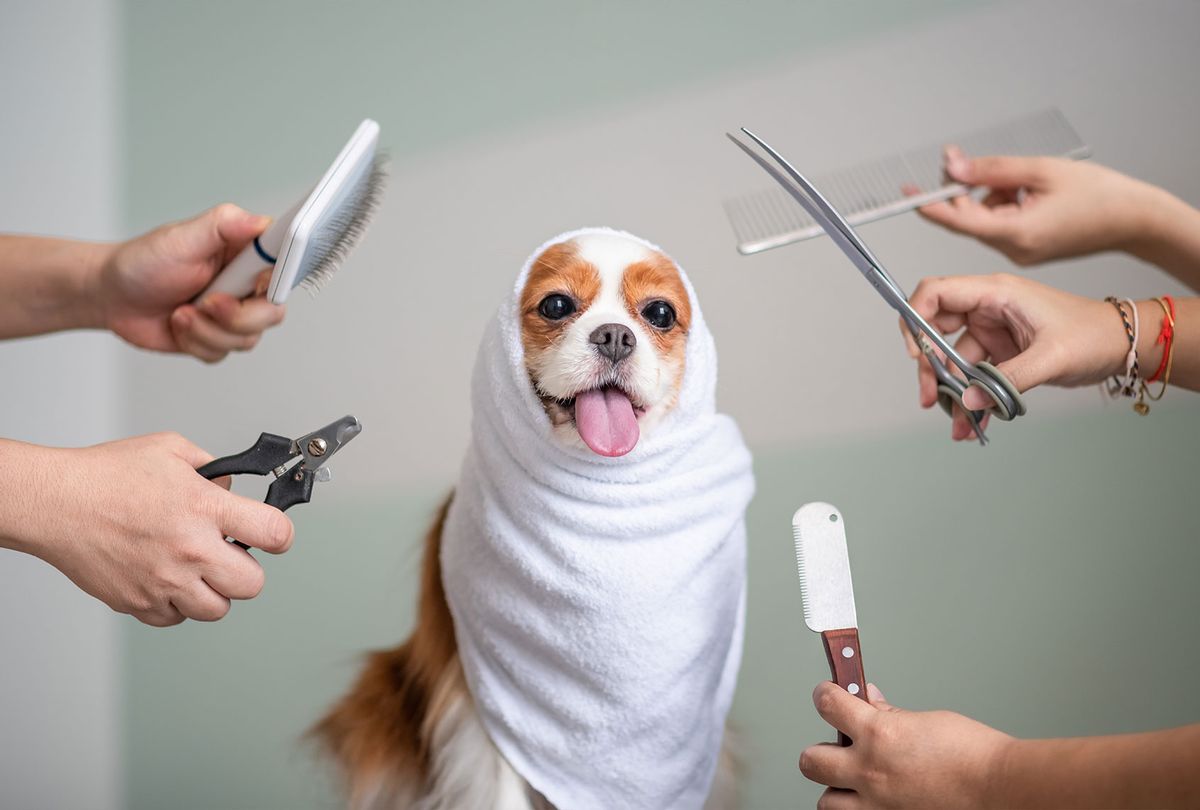 Many a bad fur day has been averted by dog groomers. The people holding the shears at your local pet salon are experts in keeping pups looking neat, but beautification is just one part of the job. Dog groomers are also versed in handling difficult personalities — both from the four-legged clients and their owners. We spoke to three groomers working across the U.S. about the most challenging breeds to groom, their tricks for handling difficult customers, and other hairy aspects of the profession.

1. THERE ARE MANY ROUTES TO DOG GROOMING.

Technically, dog groomers don't need any license or certification to operate in the U.S. Regardless of the law, most groomers complete training before they start working professionally. According to Page Petravich, a groomer at Ravenswoof in Chicago, there are many paths to take. "There's no one place where you can get credentials to become a groomer," he tells Mental Floss. "There are countless seminars and workshops that can provide certificates of education and things like that, but the main way people learn about grooming is through grooming academies."

Grooming academy courses typically last six months to a year, and after completing the curriculum, graduates receive a certificate. Some groomers forgo formal classes altogether and learn through apprenticeships. Unless your groomer has a license or certificate displayed on their wall, the only way to know their credentials is to ask.

2. SMALL DOGS CAN BE THE MOST CHALLENGING TO GROOM.

Every groomer has a dog breed that makes them tense up when they see it come through the door. For Nicholas Vanet, a groomer at Island Pet Resort in Staten Island, New York, that breed is huskies. "Huskies are the ones that always cry for help," he tells Mental Floss. "I could be washing the dog, and they'll be screaming like I'm taking scissors and poking him." Despite their quirks, he still has a soft spot for the vocal breed. "These dogs are probably the biggest drama queens I know, but they're the best. I still love them."

For Kimberly Ives, a groomer at Puff & Fluff in Phoenix, Arizona, terror comes in a smaller package. She tells Mental Floss, "You can never predict a Chihuahua. They could be the sweetest Chihuahua and they could be the most stubborn Chihuahua that will turn and bite your finger off."

3. DOG GROOMERS ALSO HAVE TO DEAL WITH THE OCCASIONAL CAT.

Though dogs can be difficult customers, canine clients are rarely as misbehaved as felines. Cats don't show up at the pet salon that often, but when they do, groomers are in for a challenge. "They're not like dogs. Cats just want to be left alone," Vanet says. "You must have two people to groom a cat, because if you are by yourself it is impossible."

When a dog would rather be anywhere other than getting a trim, groomers have a trick for boosting their mood. "If the dog doesn't have allergies and it is OK-ed by the pet parent, a couple of people at my salon like to use peanut butter or a treat as a form of positive reinforcement for doing nails, or really doing anything [the dogs] don't want to do," Petravich says.

For Vanet, peanut butter comes in handy during bath time. "When I give them a bath and they're trying to move around a lot, I actually take peanut butter and I put it on the wall," he says. "[I use] a little toy type of thing that I keep against the wall, and they start licking it to distract them from moving."

Some breeds are difficult to groom because of the type of haircut required, not their temperament. A classic French poodle cut — with poofs of fur and a shaved face and legs — is a groomer's worst nightmare. According to Petravich, "There are a lot of breed standard haircuts for poodles, like the one you see in dog shows which is called a Historically Correct Continental — it's very difficult to execute." That type of haircut is rarely asked for, but many poodle owners still want their dogs' feet and faces shaved — which can be harrowing. "It takes a lot of patience and a lot of practice," he says. "You have to be very careful going in between the toes."

6. THE NUMBER OF DOGS THEY GROOM IN A DAY VARIES.

Because the size of a grooming job depends on the animal, many groomers don't know how busy their day will be until they get to work. "When I come in I'll review my schedule and just kind of see overall what my schedule looks like for the day," Ives says. "I see whether I have big dogs, little dogs, and mentally prepare myself for what I'm going to be dealt with today."

According to Petravich, scheduling a full day of grooming can be a complicated process. "If I have four large doodles come in, I'll pretty much be only grooming those doodles all day, but if I have four smaller dogs like shih tzus or little schnauzers, I can usually do those plus some larger dogs," he says. "So everything is dependent upon how big they are, how long the coat is, the kind of haircut that they want, the temperament of the dog, and really how much I can do in an eight-hour day."

Sometimes, the most bizarre jobs groomers are given are what they're asked not to do. "A lot of people like to let the eyelashes grow on goldendoodles, which believe it or not can grow up to like 6 inches," Petravich says. "It gets to a point where we have to cut them just a little shorter so they can eat without their eyelashes getting in their food."

8. DOG GROOMERS HAVE STRATEGIES FOR SHORT-HAIRED PUPS, TOO.

Owners of naturally short-haired dogs may think they can skip the groomers, but these pets can still benefit from a professional haircut. When grooming Chihuahuas, labs, and pugs, groomers rely on a method called carding. Using a small comb, they brush out the dog's undercoat so the smooth top coat lays flat. In addition to giving the dog a neater look, carding also removes the small hairs that dogs are more likely to shed.

9. SOMETIMES SHAVING A DOG IS A GROOMER'S ONLY OPTION.

If a pet groomer tells you they need to shave your pet, they want you to know they're not taking the easy way out. Brushing out matted fur is more trouble than it's worth — for both the groomer and the pet.

"Some pet parents request that we don't shave out matting," Petravich says. "A lot of people think that if we shave down dogs that have matting it's the groomers being lazy, that we don't want to brush the dogs out and do a long haircut. I think a lot of people think we're lying to them about the severity of things, when in reality we're just trying to do what's best for the dog, what's best for their health."

According to Ives, matting can be prevented with proper maintenance at home, but many pet owners ignore the problem and leave it for the groomers to deal with. "Nine times out of 10, people do not comb their dogs properly. As groomers, we do try to educate our customers on how to properly care for their dogs at home in between groomings, but some people don't take our advice. They don't want their dogs shaved in other words, and sometimes that's our only option to do that because of how severe the matting is."

10. BEING A DOG GROOMER IS A HARD JOB — EVEN FOR ANIMAL LOVERS.

To animal lovers, getting to hang out with cute dogs all day may sound like a dream job. But professional pet groomers say the work is more strenuous than it appears, no matter how much they love their furry clients. "A lot of people always ask me, 'Oh, your job must be so easy—honestly how hard can it be to groom a dog?'" Vanet says. "What people don't notice is that this isn't just a dog where it will sit still for you and you can groom them. They're not like humans where you can ask them what they want and do it."

The unpredictable and sometimes uncooperative nature of the clients means a day of pet grooming can be a workout. "[It's] a very physically demanding job, even if you do dogs that are only under 20 pounds," Petravich says, "You're standing all day, you're having to pick up this dog over and over to go from place to place. So it's very physically demanding, and mentally draining as well when you're trying to explain to the pet parents that the matting on your dogs hair we do have to remove because it is uncomfortable."

11. DOG GROOMERS WANT PET OWNERS TO DO THEIR RESEARCH.

When choosing a breed, prospective pet parents often look at qualities like size, appearance, and personality. Pet groomers implore owners to consider the grooming needs of a dog as well before bringing one into their home. Different breeds require different levels of maintenance, and monthly trips to the groomer only take care of so much. "If you're going for a specific breed that requires a lot of grooming and upkeep, just make sure you do your research, and find the groomer that works best for you, and overall just be educated on the breed," Ives says. "Don't just get a dog to get a dog."

12. FIRST-TIME CLIENTS CAN BE THE MOST SATISFYING TO GROOM.

For all the challenging moments they face, dog groomers have plenty of experiences that remind them what attracted them to the job in the first place. The dramatic transformations that take place at the salon are the perfect example of the power of a good groom. According to Ives, "Taking a rescue dog, or anything like that, seeing them come in all matted scared, not knowing what's going on, not even being accustomed to the grooming experience, and then you shave off those matting, you get that dog looking and feeling the best you could, and their little personality comes out. That's definitely rewarding."